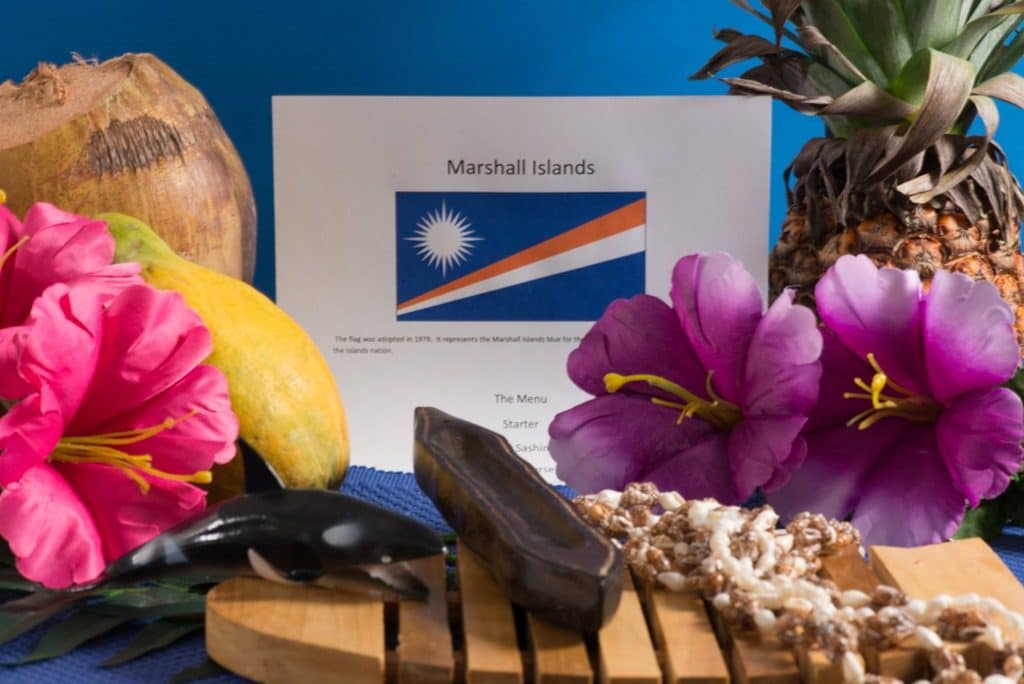 The Marshall Islands got their name from Captain John Marshall, who charted the Islands after visiting them in 1788.  Historically, the natives call their islands “Jolet jen Anij”, which means “Gifts from God.”  It was Micronesians that settled the islands back sometime in the second millennium B.C., but there are no actual historical records of this period.  Over time, the Marshallese people learned to navigate the islands over long distances by canoe, using traditional stick charts. This is an amazing, navigational tool that has been passed on from generation to generation.  Each person makes their own stick tool to document how to navigate the currents to get to the other islands.  The stick tool is made from the midribs of coconut fronds and island locations are represented by shells.  Each stick chart is so unique that only the individual navigator can interpret and use it.

The island country is located near the equator in the Pacific Ocean; just slightly west of the International Date Line.  It is made up of 29 coral atolls, comprising numerous, individual islands and islets.  They are located about halfway between Hawaii and Australia.  The atolls and islands form two groups: the Ratak, which means “sunrise”, and the Ralik, which means “sunset.”  The two island chains lie parallel to each other, running northwest to southeast, over 750,000 square miles of ocean.  The atolls combined are only about 70 square miles of landmass.  Only 24 of the atolls are inhabited.

There are about 75,000 people who call the Marshall Islands home.  Over two-thirds of the population live in the capital atoll, called Majuro.  Ebeye is a secondary urban center, located on the Kwajalein atoll.  The average altitude, for the entire country, is only seven feet above sea level.  This makes the Marshall Islands one of the most endangered nations in the world, due to global warming.  They actually have experienced extreme flooding, due to rising tides, two different times in recent years.  One was on Christmas morning in 2008 and another in 2013, when high tides caused wide spread devastation, as the sea rose three feet.  Both times, states of emergency were issued and used as an opportunity to protest against climate change.  As if that isn’t enough of a challenge, the climate there itself is hot and humid, with a wet season from May to November.  Unfortunately, the population has grown to such an extent, that freshwater from rainfall, is in short supply each year.  The threat of drought continues to be a dire concern.

These islands have a rich history, with most of the residents being of Micronesian origin.  They migrated from Asia, several thousand years ago.  A minority of Marshallese have some recent Asian ancestry, mainly of Japanese origin.  It was a Spanish explorer who was the first European to see the islands in 1526.  Several other explorers followed.  Unfortunately, the islanders had no immunity to the diseases they carried and many died as a result of their visits.  In 1874, the international community recognized the islands as part of the Spanish East Indies.  Yet, they did not protect their claim and so the Germans took over, declaring the islands as an “Imperial German Protectorate,” in 1884.  The Japanese, who frequented the islands throughout the years, especially during World War I, were next to take control.  The League of Nations, in 1920, approved the South Pacific Mandate, allowing Japan to take over the all former German colonies in the Pacific Ocean, north of the equator.  This made the Marshall Islands a strategic base for the Japanese at the beginning of World War II.  In 1944, it took the United States just three months, to destroy all the Japanese bases on the Marshall Islands and take over occupation.  The battle, however, caused widespread damage with injuries, food shortages and massive devastation.  After the war, several island groups located in Micronesia, including the Marshall Islands, were passed on formally to the United States as part of the Trust Territory of the Pacific Islands.

Between the years 1946 and 1958, in the early days of the Cold War, the United States used the remote Marshall Islands for nuclear weapons testing.  Residents who lived on Bikini Atoll, voluntarily relocated for the testing.  This was, according to United States, President Truman, who was then in power, for “the good of all mankind and to end all world wars.”  They tested 67 nuclear weapons.  This included the largest, atmospheric nuclear test ever conducted, code name, “Castle Bravo.”  The bombs, in totality, were 7,200 times more powerful than the atomic weapons used during World War II.  To put this in perspective, it would be the equivalent of dropping 12 bombs, the size of the ones dropped on Hiroshima, every day for 12 years.  In 1952 they tested the first hydrogen bomb (which actually requires an atomic bomb to detonate it) this was code named, “Ivy Mike.” This bomb completely obliterated the island of Elugelab.  In 1956, the United States Atomic Energy Commission, said the Marshall Islands were by far the most contaminated region in the world.  Many millions of dollars have been paid to the Marshallese people as compensation for the terrible destruction of their land, health, food and water supplies.  The claims are on-going.  Bikini Atoll is still considered unsafe some 60 years later.

Life goes on, however, in the Marshall Islands.  Most all of the Marshallese people are Christians.  The official languages are both Marshallese and English.  The economy is subsidized largely by the USA (as well it should be.)  They gained full independence in October of 1986.  The United States Army still maintains a Ballistic Missile Defense Test site on an atoll, renting the land from the Marshallese.  Agriculture is difficult for many reasons and is mainly concentrated on small farms.  The most important crops are coconuts, tomatoes, melons and breadfruit.  There are some small-scale industries for fish processing and copra and for the islanders’ unique handicrafts.  Fishing, of course, has been the mainstay of the economy and their main food source ever since its settlement.  The Marshallese are exploring the use of coconut oil as an alternative to diesel fuel, to run their vehicles and generators.  Tourism is also very important to the economy, as the area was also used as a graveyard for ships and planes from the war.  It has, for that reason, turned into a very desirable diving location.

As we look into the cuisine of this nation, it has been affected by many factors.  Fish remains a mainstay.  However, they only can produce about twenty percent of their food needs.  The result is to import lots of processed foods from the USA.  Things like SPAM and corned beef are commonplace.  Fish, seafood and rice (although rice is an import) are the staples, along with anything made from coconut, breadfruit, pandan fruit and leaves, taro, papaya, arrowroot, yams and pumpkins. These are the most authentic ingredients in their island culture.  Like many Pacific islands, a whole roasted pig is often cooked for special celebrations.  One of the most important, in the Marshallese culture, is a baby’s first birthday.

So let’s enjoy a Marshallese meal: 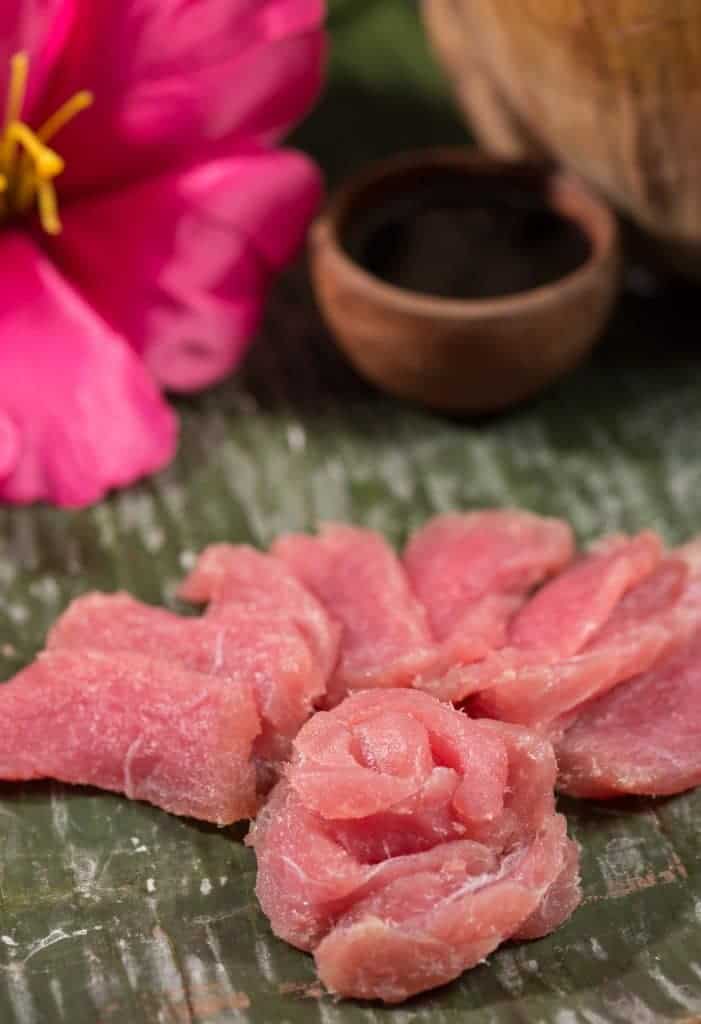 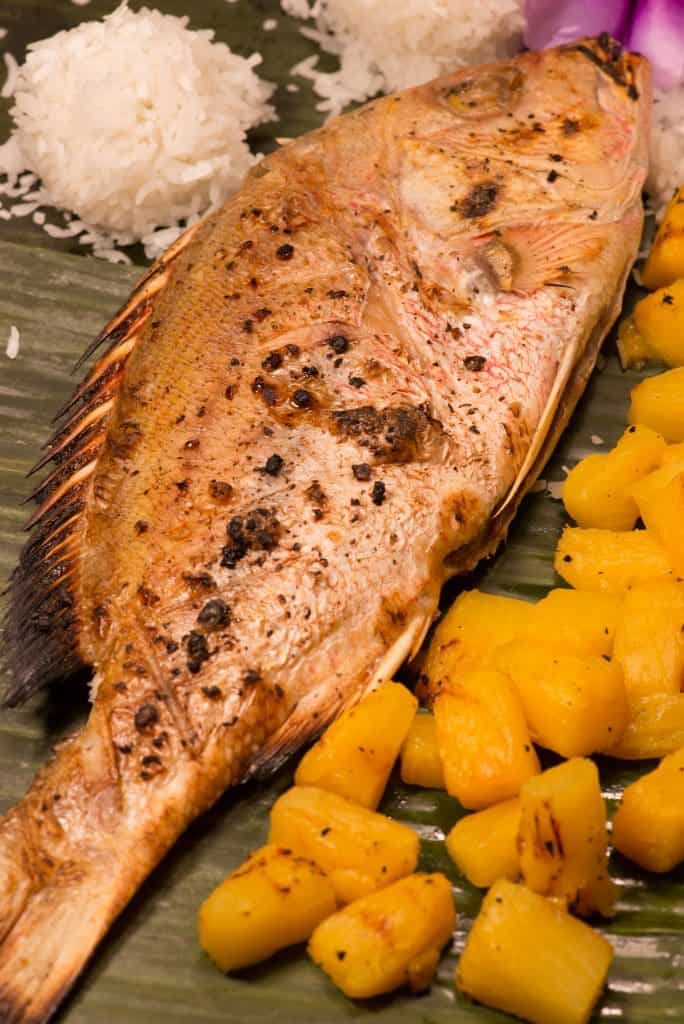 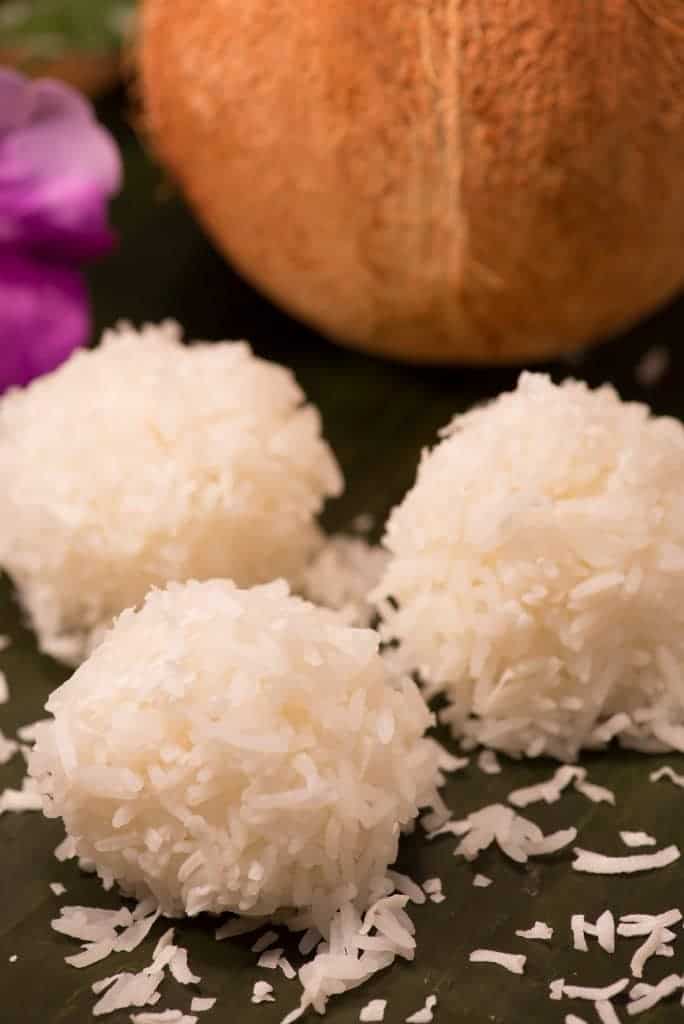 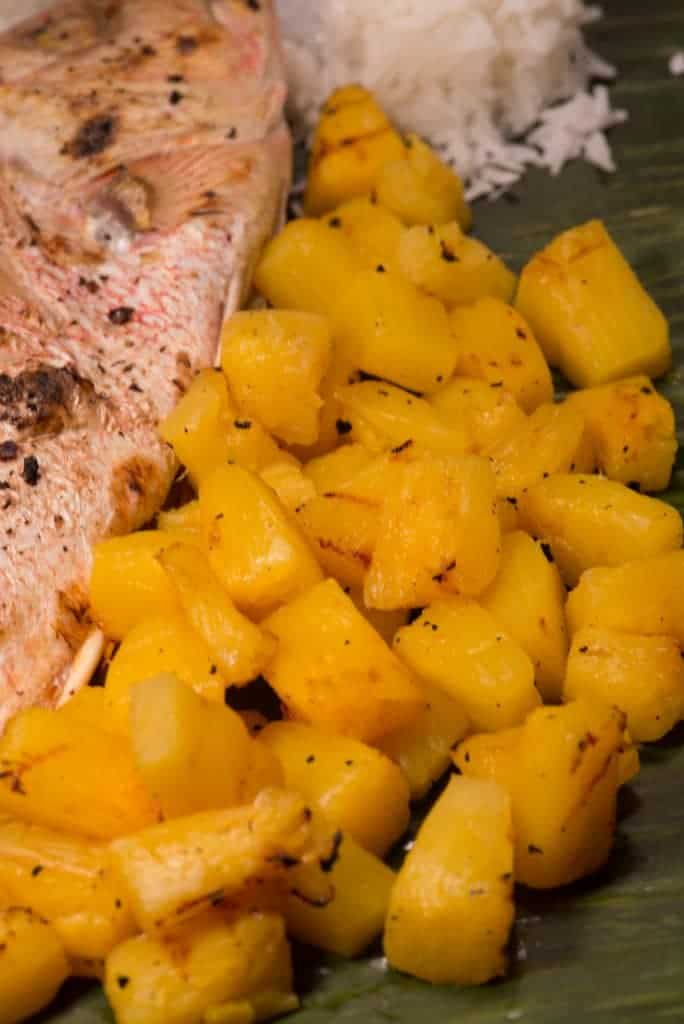 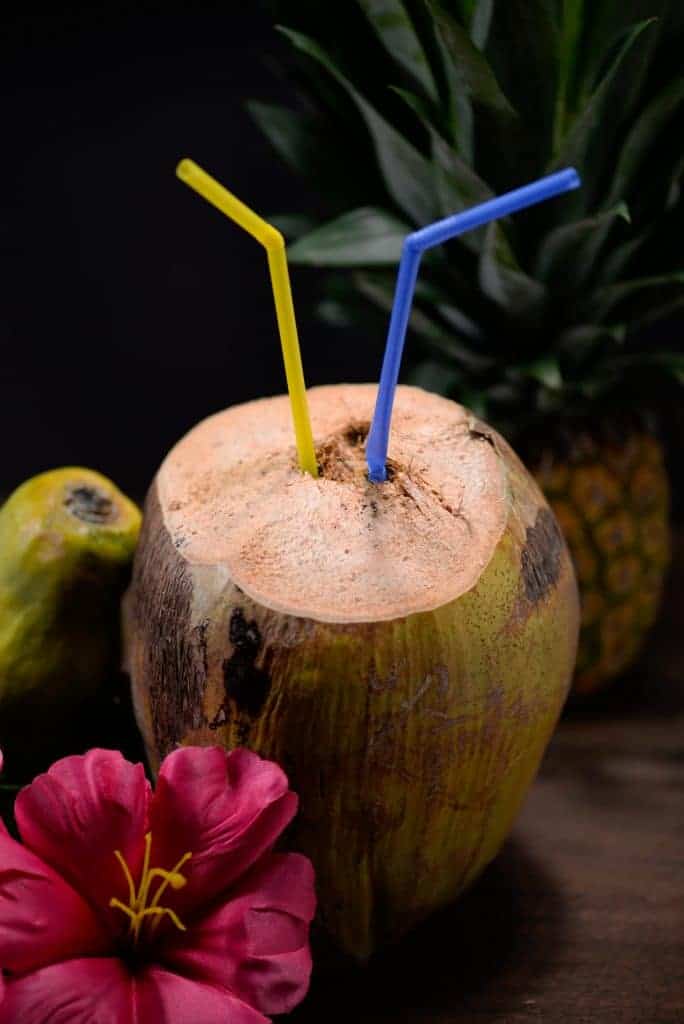 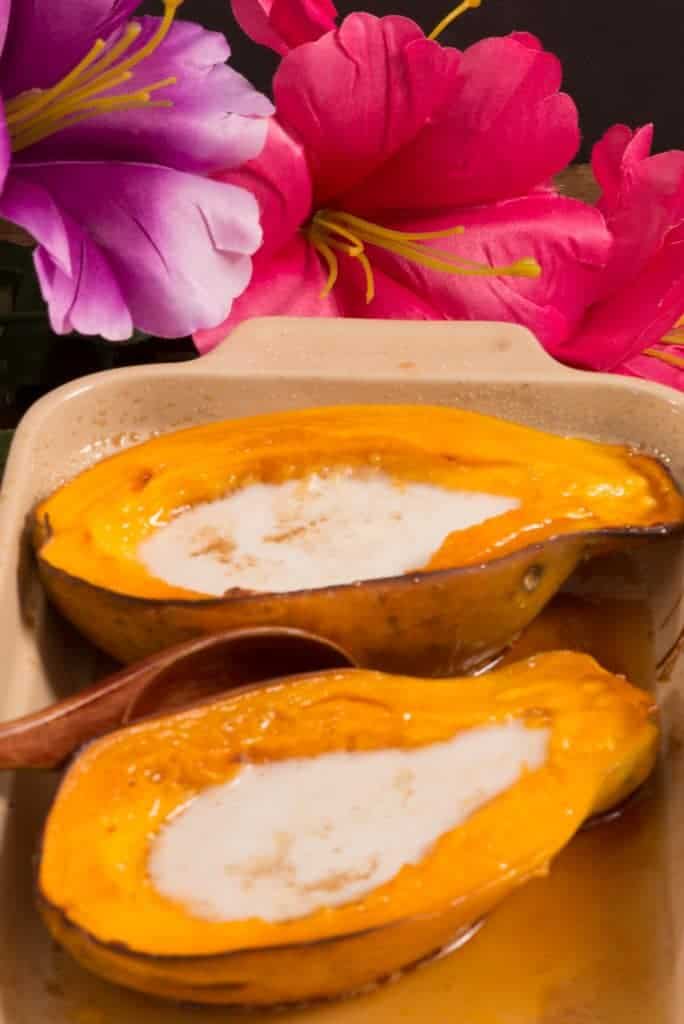 We set the table with tropical fruits; papaya, mango and coconuts.  The food was served on banana leaves.  In the Marshall Islands, a palm frond, would typically be artfully woven to make a mat or bowl for food, especially for special occasions.  We also included a shark in the décor.   In October of 2011, the government declared an area covering 772,000 square miles, to be reserved as a shark sanctuary.  This makes it the world’s largest shark sanctuary.  Beautiful hibiscus, in various colors, perfected the tropical setting.  We put on a little island music to complete the mood.

We began our meal with thin slices of very fresh, ahi tuna, with a squeeze of lime and soy sauce, which the Marshallese call, “so shoe.”  (I simply love sashimi and this was a wonderful way to begin our meal.)  We enjoyed it with fresh coconut water, straight from a young coconut.  It had a sweet, nutty flavor that was very refreshing.  The health benefits of coconut water are extensive; rich in potassium, low in fat, and super hydrating.  Coconut water was even used during the war as an IV, for the wounded soldiers.

For our main course, we absolutely loved the freshly grilled, red snapper. The fish was cooked whole with just a bit of “so shoe” for flavoring.  Often times, in the rural atolls, the native islanders will put a whole, fresh fish over the wood or coconut shell fire and not even clean the fish beforehand. The fish is actually still alive when it hits the grill and is considered the ultimate in a fresh fish, grilling experience.  It is said that this method, using the fishes own juices, flavors the fish perfectly.  We enjoyed ours from the fish market, not the sea, and it was pre-cleaned.   There is something so delicious about a grilled fish, without much seasoning and this snapper was no exception; tender and lovely.

The fish was served with rice balls, they call chukuchuk.  It is rice that is steamed, shaped into a ball and then rolled in freshly grated, coconut meat.  The flavor of the fresh coconut meat was an amazing combination with the rice balls.

For another side dish, we grilled pineapple chunks.  I love how the grill brings out the ultimate sweetness in the pineapple.  It went perfectly with the fish and rice balls.

For dessert, we had baked papaya with sweet coconut cream.  I had never tried baking papaya before and the aroma emitted while baking, I can now say, will surely get you in the island mood.  It was fantastic and a lovely ending to our Marshallese meal.

As we say goodbye to the beautiful coral atolls and islands, we do so with great hope that their nation will be spared from the rising sea levels and that all of their limited land will once again be safely inhabitable.  The Marshallese people, despite all they have been through, remain a friendly, hospitable and loving society.