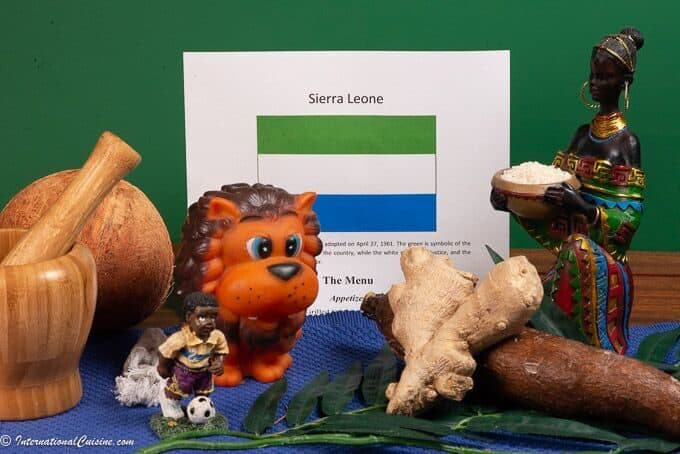 How did Sierra Leone get its name?

It was a Portuguese explorer by the name of Pedro da Cintra, back in 1492, who named the area, “Sierra Lyoa” meaning, “Lion Mountains.”  There is some question as to whether it was named for the shape of the mountains or because the thunder sounded like a lion’s roar, upon his arrival.  In 1808 when it became a British Crown Colony, the name was misspelled to Sierra Leona and then later modified to Sierra Leone.  Sierra Leoneans call their country “Salone,” a Franco Krio name.   A nickname for Sierra Leone is “The Little Jewel,” as it is known for its gold and diamonds.

Where is Sierra Leone located?

Sierra Leone lies on the west coast of Africa.  It is bordered by Guinea to the north and northeast, Liberia to the south and southeast, and the Atlantic Ocean to the west.  It has a tropical climate with two seasons; the dry season is from Nov-May and the rainy season is June-Oct.  It has a coastal belt of mangrove swamps, a wooded hill country, an upland plateau and mountains.

A brief history of Sierra Leone

Archaeological findings show that Sierra Leone has been inhabited for thousands of years.  Different tribes and invaders organized themselves in small political units of kingdoms and chiefdoms.  Muslim traders brought Islam to the country.  It was the Portuguese sailors, who were the first Europeans to detail their adventures along the coast of Sierra Leone.

Located near the capital port city of Freeport was the Rokel estuary, which was established as an important source of freshwater for sea traders.  Initially, it was a place to trade for swords and kitchen items, in exchange for beeswax and fine ivory works.  By the mid 1550s, it was the slaves that were traded.  The English, French, Dutch and Danish all had interests in the area.  Trade was established through African rulers who prohibited European traders from entering the interior of the continent.

In 1787, British philanthropists founded the “Province of Freedom.”  It later became known as Freeport and was the principal base for the suppression of the slave trade.  Some 1200 slaves were relocated there from Nova Scotia in 1792, along with a group of slaves from Jamaica.  By 1855, over 50,000 freed slaves called Freetown home, and they became known as the Krios.

Sierra Leone gained independence on April 27, 1971.  Since independence it has experienced many changes politically, economically and in their social norms.  The 1990s brought a horrific civil war that led to intervention by the International community.  The war ended in 2002 and the process of rebuilding continues to this day.

As if recovering from civil war is not hard enough, Sierra Leone was hit in May of 2014 with the deadly Ebola virus.  The Ebola virus transmission was deemed  to be stopped in 2016, however there was a new strain found in bats in 2018 that once again alarmed scientists.  Although there are many travel warnings about visiting Sierra Leone, some bloggers say they have the most beautiful beaches and friendliest people in all of West Africa.  Despite its diamonds and gold, due to fighting and the skimming of resources, it is a poor country, one of the poorest in the world.  It is however, making strides and one day may become one of the world’s hottest, new travel destinations.

The majority of Sierra Leoneans still live a traditional life, including subsistence agriculture, with ruling chiefs and religions which preserve social stability.  They also preserve local music, customs and traditions.

One interesting feature is the secret societies of Sierra Leone.  They are a fundamental part of the culture. There is the men’s secret society called the Poro and the women’s secret society is called Bundu.  These are where life lessons are taught and essential skills and knowledge concerning reaching puberty are passed on to contribute to the important roles of their society.

They also practice an interesting way of settling disputes called, palaver.  You may see two or three people yelling at each other quite aggressively and then immediately stop and hug each other like they are best friends.  This avoids anyone holding a grudge.

There are 16 different ethnic groups in Sierra Leone with the Temne in the north and Mende in the south, which is the largest.  The official language is English but Krio is the most universal.  Animist and Muslim are the two most practiced religions, followed by Christianity.

The Limba tribe plays a very important role in Sierra Leonean culture as they are the only people who can tap palm wine, also called poyo.  Other villages will put up signs trying to recruit good wine tappers in hopes that their village won’t run out of the naturally fermented, alcoholic drink.

Sierra Leone’s cuisine is influenced by West Africa, in general.  Rice is considered a staple and they have multiple words in creole to describe the many ways it is consumed, like: pounded rice, steamed rice and the crusty part that forms on the bottom of a pot.  There is a saying there that, “If I haven’t had my rice, I haven’t eaten today.”  The rice is served with all sorts of stews and sauces, typically made with greens from cassava and potato leaves.  Other popular ingredients include: palm oil, onions, tomatoes, yams, ginger and chili peppers.  Protein is usually derived from ground-up nuts and beans, but also from fish, chicken goat meat and pork.  Being along the coast, oysters, lobster and crab are also frequently consumed.  The majority of the calories however, will almost always be from rice.

Fruits are also abundant in the lush, tropical regions of Sierra Leone and include: oranges, bananas, limes, lemons, pawpaws, avocados, watermelon, mangoes, guava and pineapples.  Fruit is typically consumed as a snack.  Plantains are fried and served as chips.  The stock cube, maggi, is also prominent in the cuisine, adding an umami, salty flavor, for which West African cuisine is well known.

Food is typically cooked over firewood or charcoal in large pots, placed directly over the flame.  It is only prepared by women or girls. 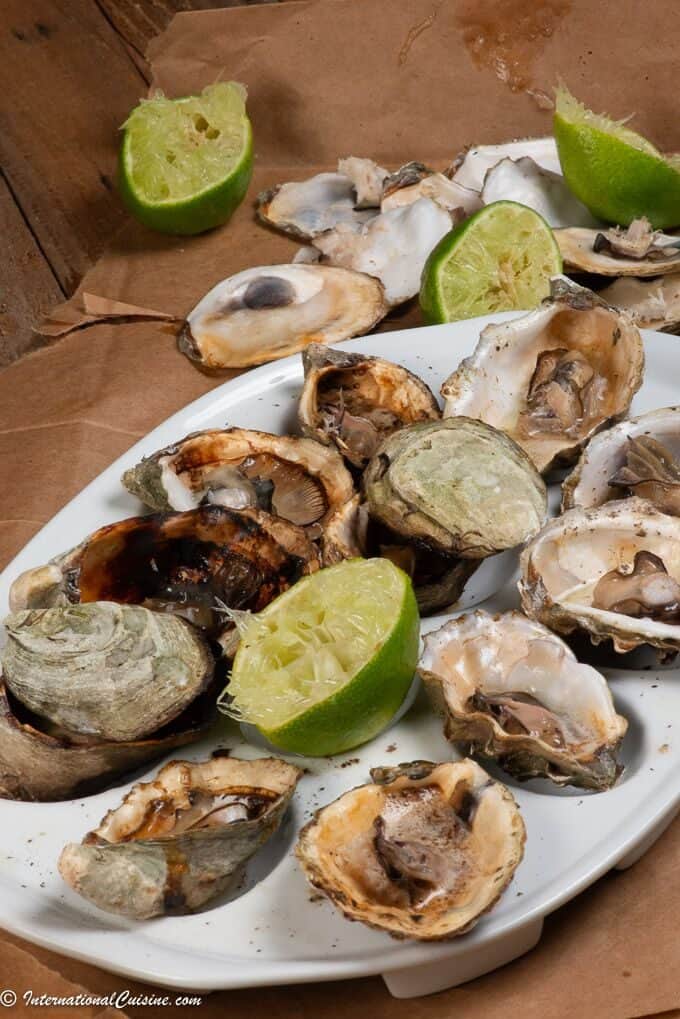 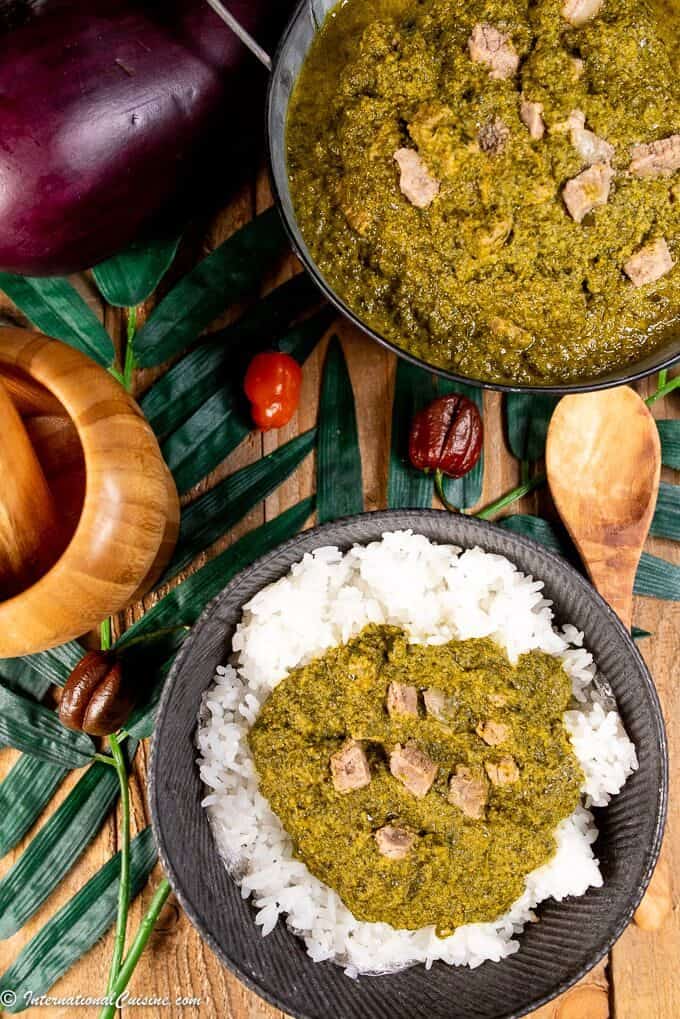 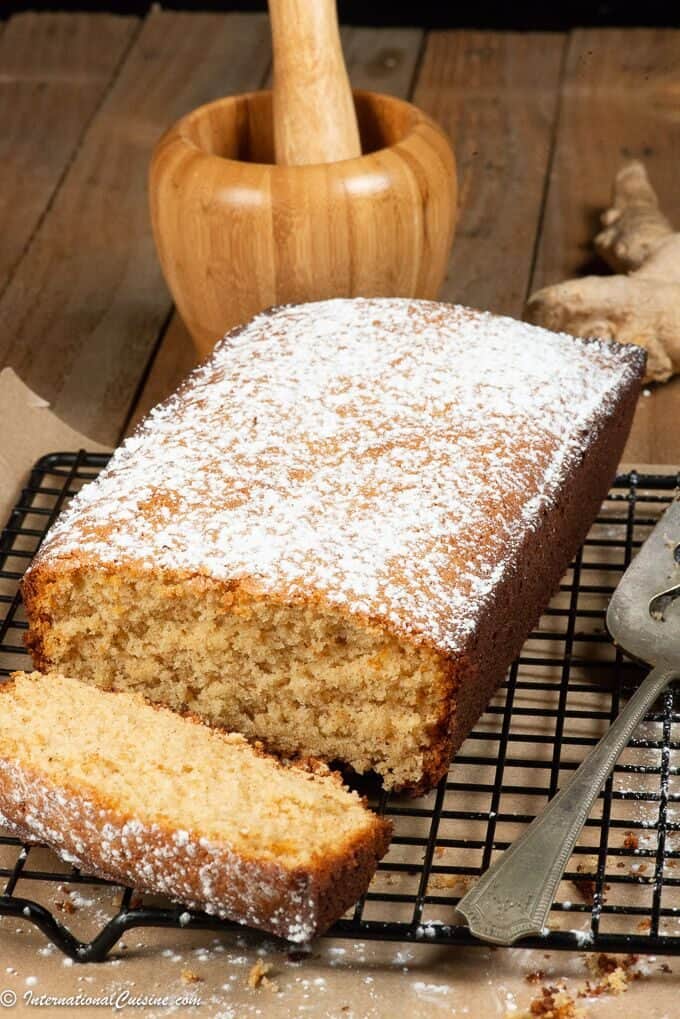 the meal served with: 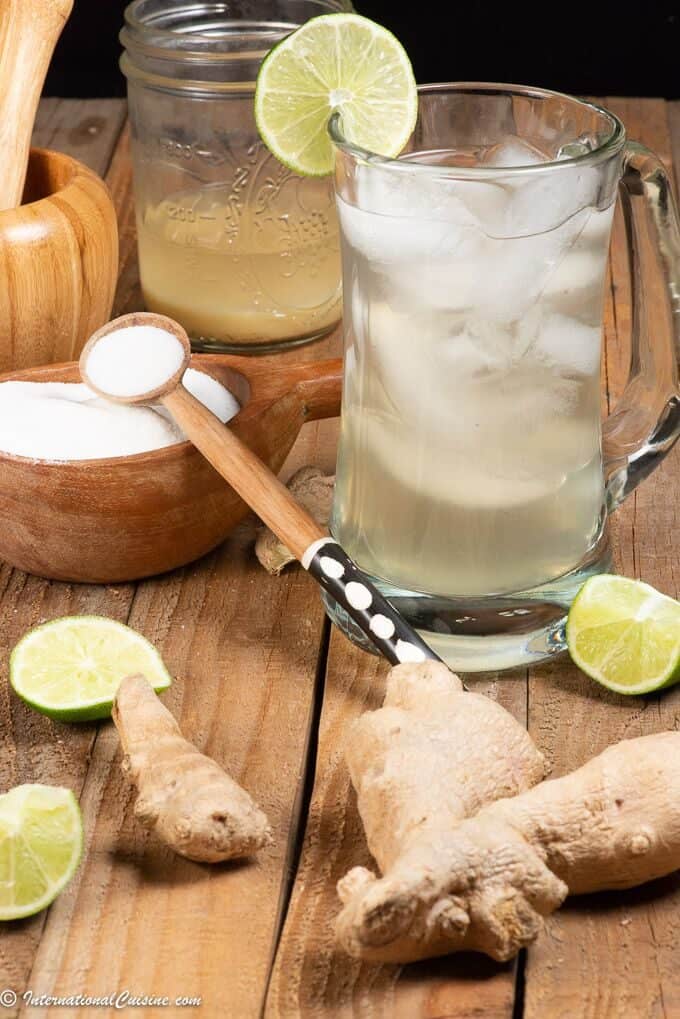 We set the scene with colors of the Sierra Leone flag; green white and blue.  The green is symbolic of the agriculture and natural resources of the country.  White symbolizes justice and the blue is for the ocean and harbor of Freetown.  A lion figure was placed to represent the name of the country, as well as a coconut and a few palm fronds.  Rice, ginger and peanuts were added, as these are the staples of Sierra Leone.

Our first course was fresh, grilled oysters.  I have always eaten oysters raw and this was my first experience to grill them.  They actually open up on the grill and are incredibly succulent and delicious. They are simply served with a fresh squeeze of lime juice.  Grilling is a perfect way to enjoy oysters for those who are squeamish about eating oysters raw.  Oysters are abundant in the swampy mangroves that line the coast.  They are also an important source of income for the locals who harvest and sell them.

Our main course was cassava leaf stew, with sauce and served with steamed, rice balls.  It had a bit of beef in it, which is a luxury ingredient in Sierra Leone.  Cassava leaves were bought already pounded and the addition of eggplant, maggi, peanut butter, onions and smoked fish made this dish rich and flavorful.  It was a delight to the palate.

We set our plate in the center of the table and made little balls with the rice, which were then dipped into the sauce.  Food is to be eaten only with the right hand.  Typically, the men get the best pieces of meat, then the boys.  The women and girls get what is left.  It is important however, to only eat what is directly in front of where you are seated.  It is considered rude to reach over the platter.  It is also considered rude to talk during the meal.

For dessert, we enjoyed what is called, ginger cake.  I found it more like a bread than a cake but it was very tasty and a lovely way to end our meal; a sweet bite, topped with powdered sugar.

We enjoyed the whole meal with a very popular drink that is loved all over West Africa called, ginger beer. This was the non-alcoholic version and we loved it.  The ginger adds a surprising amount of heat to the drink.  The ginger settles on the bottom of the glass and can be added to your desired level of heat.

After dinner, we sat down and watched the adventure movie called, Blood Diamonds.  The movie depicts Sierra Leone during the civil war when diamonds were traded for weapons.  It was a tragic and violent time in this country’s history.

As we say goodbye to Sierra Leone, I leave you with a few proverbs:

“To try and fail is not laziness”

“It is better to be loved than feared”