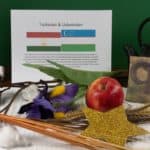 How did they get their Names?

Where are Tajikistan and Uzbekistan Located?

The countries are located in central Asia; both are neighbors, and both are landlocked.  Uzbekistan is one of two countries in the world that is doubly landlocked, (the other is Liechtenstein).  They share borders with Afghanistan and Kyrgyzstan. Tajikistan is just to the east of Uzbekistan.

Tajikistan has a river system that is an important source for hydroelectricity.  In fact, Tajikistan has the second highest dam in the world.  Both countries have diverse landscapes.  Tajikistan is known for its really tall Pamir and Alay mountains, with altitudes ranging from 980 ft to 24,600 ft., whereas, Uzbekistan is mostly desert.  However, they both share a fertile valley, which is  prized for agriculture.

A Brief History of Tajikistan and Uzbekistan

Tajikistan has been inhabited for thousands of years.  It was part of the Persian Empire, the Batrian Empire and then the Arabs brought Islam to the land.  In 875 AD, the Samanid Empire came to power. This is the time period from which much of the Tajik culture comes.  In the 19thcentury, Tajikistan was absorbed into the Russian Empire and later became part of the Soviet Union, until it became independent in 1991.

Uzbekistan, due to its central location, has a long and rich history.  Many empires and conquerors passed through the land and many of its cities were trade centers along the famous silk road.  Alexander the great, Arabs, the Samanid Dynasty and the Mongols, were just a few of those that came into power.

Uzbekistan’s golden years were in the 14th century, when the Timurid Dynasty rose to power.  It was led by Tamerlane and  his empire.  The capital city was the City of Samarkland.  Like Tajikistan, the Russian Empire took over in the 1800s and Uzbekistan became part of the Soviet Union until the Soviet collapse.  Uzbekistan became independent in 1991, as well.

Since their Independence, Uzbekistan is central Asia’s most populous state and strives to assert itself as a regional power, often butting heads with Tajikistan.  Uzbekistan has been led by a Soviet era, communist party, boss since its  Independence.  Tajikistan had a bloody civil war from 1992 to 1997.  Since then, it has established political stability and shown some economic growth, although it is still one of the poorest countries in central Asia.

The religion in both countries is primarily Sunni Muslim, with a small Shi’ite minority.  (A large Ishamaeli still exists in the Pashmir region of Tajikistan.)  Religion however, is mostly secular, as it was suppressed during the Soviet reign.  Uzbekistan is famous for its beautiful mosques, especially in Samarkand, which has been designated as a UNESCO World heritage city.  It has the largest number of restored buildings showcasing mosaics, reliefs, azure blue tile and unique architecture.

Tajik is the official language in Tajikistan and Uzbek is the official language in Uzbekistan.  Russian is also spoken in both countries.  Literature originated from oral traditions and folklore legends.  Tajikistan has the legend of Yeti; an enormous shaggy, ape-man with huge feet and sabre-like teeth.  In nearly every Tajikistan village you will find a Yeti witness whose job it is to tell visitors the tales of Yeti and guide them to remote places for potential sightings.

Both countries share a special genre of music called “Shashmak,” which has been included by UNESCO in the list of masterpieces of oral and intangible heritages of mankind.

The most popular holiday in Tajikistan and Uzbekistan is “Navruz.”  This signifies the beginning of a new year and new life.  Colorful, traditional costumes are worn, and a variety of foods are laid on the table, but the star of the banquet is sumalak.  It is an ancient recipe made from flour and wheat sprouts, washed in water and oil.  It is said to strengthen the immune system and clear the body of chemical waste.  If you try it for the first time, you should make a wish, as it is believed the wish will definitely come true.  This dish must be cooked by only kind, old, women, who sing and dance while making it.  The name sumalaktranslates to “30 angels.”  This dish must be cooked overnight so that the angels may participate in the making.

The two countries have similar cuisines, as the influences over history have been nearly the same.  The influences are mainly from Russia, Afghanistan and Iran.  The national dish is plov in Uzbekistan, or osh, as it is called in Tajikistan.  It is, in fact, the same dish.  Another main food is qurut, which is a ball of dried, salted cheese that is dissolved and served with non-bread and vegetables.

Non bread is an integral part of the cuisine and they have many superstitions about bread.  If non is dropped on the ground, people will put it up high for beggars or birds.  You are never supposed to put the bread upside down or it will bring bad luck.  When someone leaves the house on a journey, a bite of non is taken and the loaf is then saved until they safely return.  Bread is also never cut with a knife, it is always torn.

Lamb is the most popular meat that they consume.  However, horse meat and goat are also popular, as is beef and poultry.  Being Muslim countries, pork is not consumed.  Mutton is served in plov and made into soups called shurbo, which are thick soups with noodles and vegetables.  Noodles and dumplings are widely loved, as wheat is readily available.  Kebabs are also a very popular dish.

With fertile valleys and farmland, fresh seasonal produce is used in many dishes and in summer, grapes and melons are often eaten as a dessert or a snack between meals.  They are known to have the sweetest and juiciest melons in the world.

Green tea (Kuk-choy) is considered the national drink, although black tea (Kora-choy) is typically consumed more often in the winter months.  Tea is served before and after the meal.  It is served in a cup called a piala.  Being offered tea in both Uzbekistan and Tajikistan is considered a sign of hospitality.  Traditionally, the more a guest is esteemed, the less tea is poured in his piala.

So, let’s enjoy a Tajik and Uzbek meal: 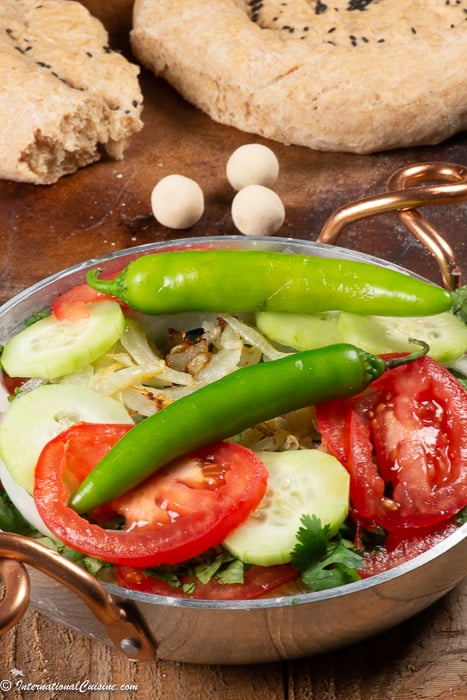 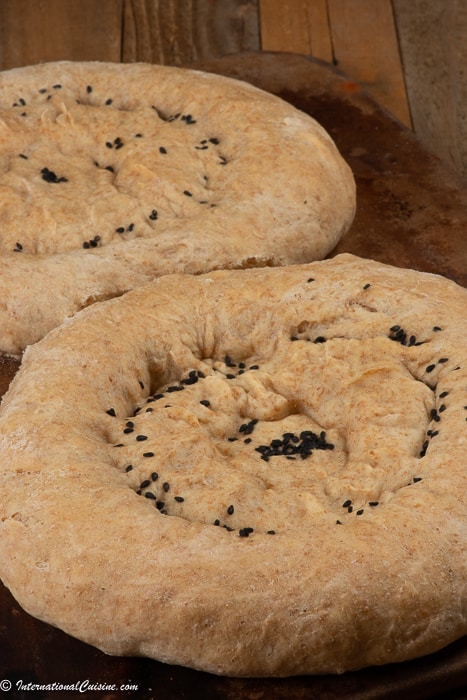 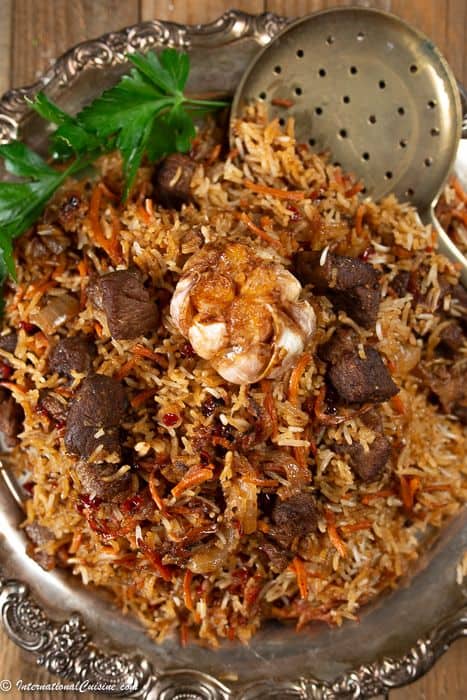 We set the scene on the floor with a simple cloth, common to both countries, called a “dastarkhan.”  (One could also use a low table.)  We placed a tea pot on the cloth, as green tea would be served prior to the meal and at the end of the meal, which is customary there.  Cotton and wheat were added to the décor since they are very important crops to both countries.  An apple was placed, because this was the area from which they originated.  Photos of the Uzbek cat and the markhor completed the scene. They are the national animals of the two countries.

Our first course was qurutob, served with non bread.  I was excited to try this new and unusual salted cheese called qurut, and it was really a surprising treat.  Generally, I love bread salads and this one did not disappoint.  I understand why nomads would carry this morsel of dried, salty cheese on journeys.  When you mix the dried cheese ball with water it turns into a yogurt like substance with an excellent flavor.  It in essence, became the dressing for the salad and softened the pieces of the non bread in the salad.  The salad consisted of tomatoes, onions, cucumbers and peppers, with of course, the non bread and qurut.  We loved it!

For the main course, we served the beloved plov or osh, considered to be the national dish in both countries.  It was lovely.  It was made with lamb and rice, but it also called for a barberry, which was something else I tried for the first time.  It reminded me of a small, dried cranberry; sweet yet tart, at the same time.  Both the salad and the plov was served communal style.  They generally eat with their right hand, although sometimes a spoon will be offered to a guest.

For dessert, we devoured the scrumptious cream cheese cookies.  They had little pockets filled with raisins and walnuts and were dusted in sugar.  They went perfectly with the green tea.

As we say goodbye to these two, most intriguing nations, I leave you with a few of their proverbs:

“If you sit with the moon, you become the moon”

“To know a language is to know the world”

“A chicken you eat only once, eggs a hundred times”