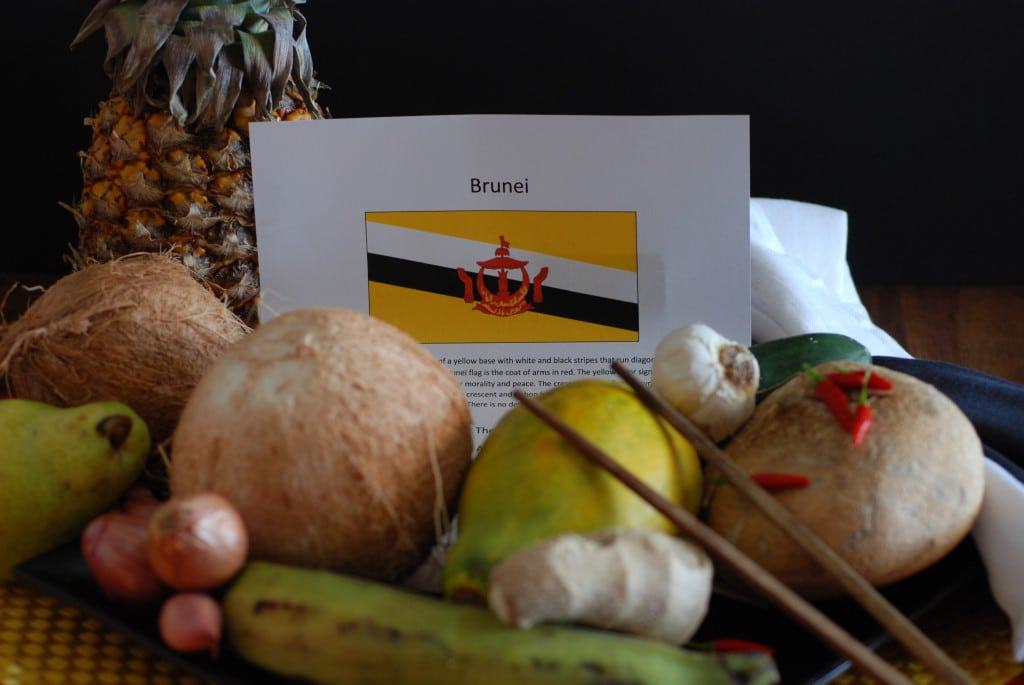 Brunei Darussalam is a tiny country located on the northwest coast of the Island of Borneo. She has two separate territories neighboring Malaysia and Indonesia and also borders the South China Sea. It is a common misconception to assume this country is in the Middle East, rather than Southeast Asia.

It is said that back in the the late 1300’s, a group of fourteen brothers, in search of a new place to live, landed at Burit on the Brunei River. The brothers found the place beautifully surrounded by lush vegetation, rolling hills and rivers, abundant with fish. When they realized what they had discovered, they shouted “Baru Nah”, meaning “That’s it” and thereafter this land was known as Brunei. It is also believed Darussalam known as the “Adobe of Peace”, was named by the third Sultan of Brunei.

An absolute monarchy (one of only seven in the world), is run by Sultan Haji Hassanal Bolkiah Mu’izzaddin Waddaulah Ibni Al-Marhum Sultan Haji Omar Ali Saifuddien Sa’adul Khari Waddien, the 29th Sultan of Brunei. (His friends call him Hassanal.) He is also the first and incumbent Prime Minister of Brunei. He is the only Sultan that has reigned since gaining full independence from Britain in 1984, although the family has ruled here for 600 years. An absolute monarch has absolute power among the people. The current Sultan is considered to be one of the richest men in the world.

Brunei is rich in oil and liquid natural gas, having one of the highest GDP in the world and no debt. The citizens are rewarded with free healthcare, education and pensions. Even housing and cars are subsidized here.

The Sultan’s 300 acre palace, named Istana Nurrel Iman, meaning “Palace of the Light of Faith”; is a combination of Persian and Arabic. The Palace, built with Brunei and Malay influences, has golden domes and vaulted roofs and cost 1.4 billion US dollars to build. It has 1788 rooms, 257 bathrooms, a banquet hall to accommodate up to 5000 guests, a mosque to serve 1500, a 110 car garage, and air-conditioned stable to house the Sultan’s 200 polo ponies and 5 swimming pools. With its 2,152,782 square feet of floor space, it is in the Guinness Book of World Records as the largest private palace in the world. He owns over 9000 cars, 17 planes including an airbus, a custom designed 747, as well as a private zoo and a golf course. The Sultan opens up the doors to his private residence for a three day period during the annual Islamic festival which marks the end of Ramadan. Guests receive gifts of food and green packets, containing money, are given to children who visit during this event.

The people of this small country are mostly Malay, with a small minority of Chinese, Indians and some Indigenous tribes. The official language is Malay, although English is also widely used especially in trade and business. The Chinese citizens there still speak Chinese. The country’s religion is Islam, and the country takes it very seriously. They recently enacted Sharia, an Islamic law. Sharia is a moral and religious law, largely identified with Islam. Sharia law is controversial to say the least, addressing topics such as sexual intercourse, hygiene, diet (pork and alcohol are forbidden), prayer, everyday etiquette and fasting. The countries that have enacted Sharia (including Brunei) use flogging, amputations and stoning as legal punishments, prescribing the death penalty by stoning for homosexual acts, adultery and rape. As Sharia differs from secular law, there is ongoing controversy as to whether Sharia is compatible with democracy, freedom of thought and women’s rights. It is also said that the Sultan and his family members do not abide by this law and it is rumored that flagrant sexual affairs, often with underage girls and orgies run rampant in their palaces. But to speak badly of the Sultan or to critique how they spend money, is a punishable crime.

Brunei is known for her raw, unspoiled nature. The government has acted to conserve huge parts of the country for national parks and is home to some of the finest in Asia. Pristine rainforests, mangroves and coral reefs are easily accessible from the capital Bandar Seri Begawan. Visitors take pleasure in a longboat ride down a winding jungle river, surrounded by rainforest and wildlife. A walk on the shores under the vast rainforest canopy will unfold an abundance of birds, plants and animals, such as the entertaining Bornean proboscis monkey. Brunei is known to be one the best places on the planet for macro photography.

Blessed with a tropical climate and shielded from natural disasters, Brunei has many exotic fruits, vegetables and spices. Game animals in rural areas, such as, sambar deer and barking deer, are commonly hunted as a food source. Wild birds are eaten there as well. The cuisine is heavily influenced by the neighbors Malaysia and Indonesia, with additional influences from India, Thailand, China and Japan. Fish and rice are their staple foods and they like it spicy; usually adding hot chilies to their dishes. Flavors like shrimp paste, galangal, turmeric and lemongrass infuse a delightful richness to their cuisine. A dish peculiar to Brunei is called “ambuyat.” It is a sticky ball of sago starch which is wrapped around a bamboo fork and dipped into a sour fruit sauce.

As I started my search for the recipes to make our Bruneian meal, I was struck by the complexity and number of ingredients in them. It would likely be one of my biggest culinary challenges to date but I was ready. I couldn't wait for those exotic Asian flavors that as yet, we haven't experienced on our journey.
So let’s eat: 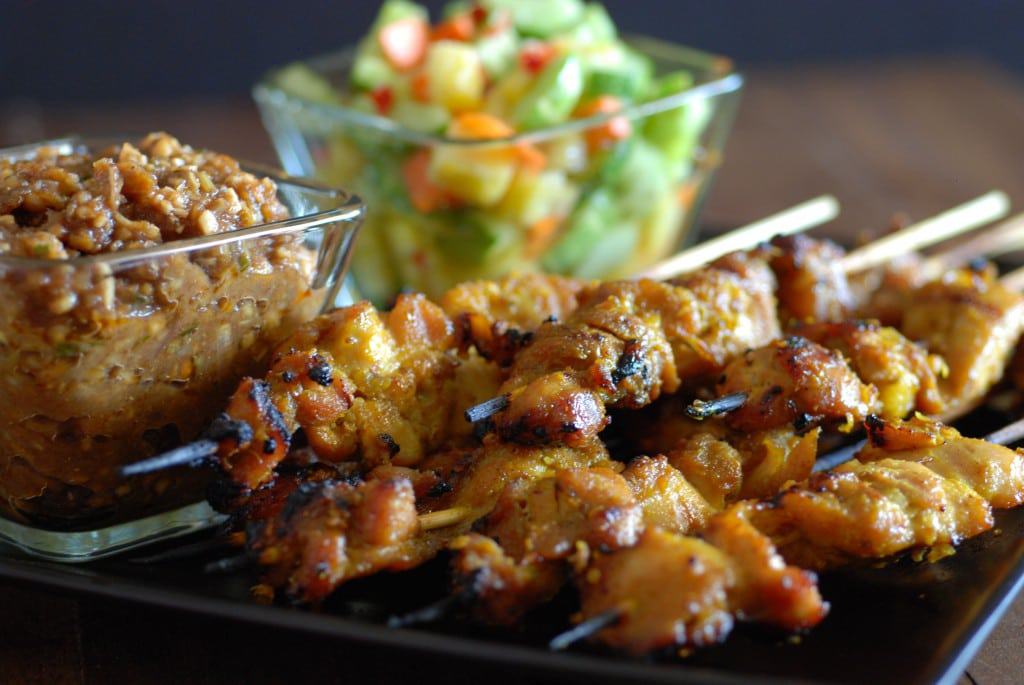 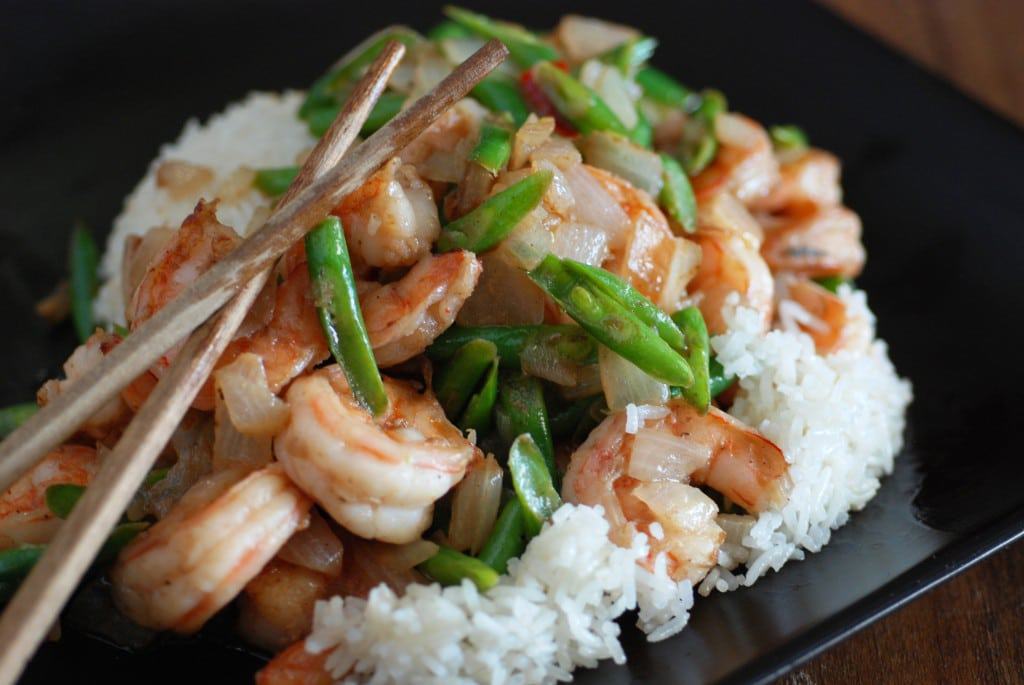 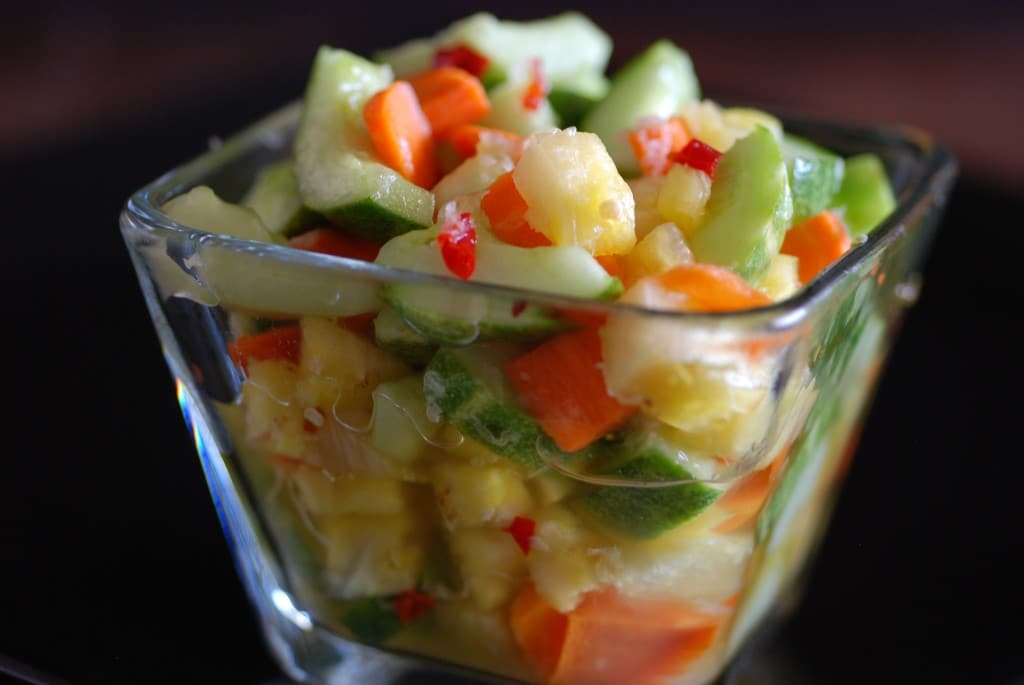 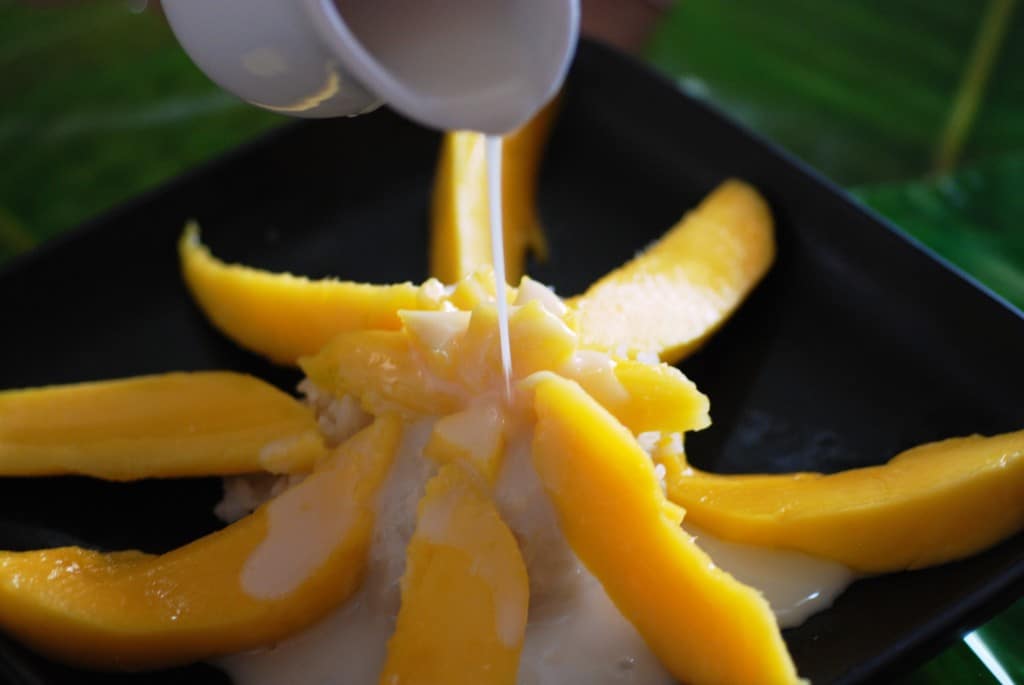 We set the table with the Bruneian colors; yellow, black, white and red. We used chopsticks for utensils, after all this is Southeast Asia. Since alcohol is forbidden in Brunei, the meal was served with a pineapple and mango tropical fruit juice.

We began with our appetizer, the chicken satay and peanut sauce. Although Brunei cannot claim satay as their own, it is loved all over the country. The chicken thighs were marinated in a complex mix of exotic ingredients overnight. The result, after grilling, was absolute heaven on earth. The warm and tender, moist chicken, dipped in peanut sauce, was beyond belief.

The hot, sweet and sour pickles were made of pineapple, cucumber and carrots. The dressing was an awesome combination of robust flavors. This dish is commonly found on tables as a condiment or side dish. We ate it with both the satay and the main dish and savored every bite.

The main dish was shrimp and green beans. In Brunei, it is made with a green bean called petai, which is a large bean and only the seed of the bean is used after the pod is removed. However, I could not find this exotic bean. So I made our dish with fresh, organic green beans from our garden and cut them on the diagonal. This dish was simple to make, cooked up quickly and was delectable. The shrimp were cooked perfectly and served over delicious coconut rice. The tamarind paste added an awesome sourness to the dish and the sugar and sesame oil provided a lovely rich and complex sweetness.

For dessert we laid fresh mango slices over coconut rice and smothered this with an amazing warm, coconut cream; a perfect ending to our amazing journey to Brunei.

As we say goodbye, here are a few points of etiquette to be aware of, should you visit this rich, little country. Public displays of affection are considered rude and if it is with someone of the opposite sex and they happen to be Muslim, it could land you in jail to be prosecuted by an Islamic court. If someone offers you food, be polite and always accept it with your right hand (the left is considered unclean.) Take small bites and never eat while walking. Do not sit with your legs stretched out in front of you, don’t lean on a table and don’t pat or touch anyone on the head that is a sign of disrespect. If you want to get someone’s attention, use all four fingers of the right hand, palm facing downward, never use your forefinger. People there are considered friendly however with rare exception, are not likely to invite you into their home. Dress conservatively, be discreet and polite.

Although I find the Sharia law that the Sultan recently enacted, to be a huge step backwards for this country (even creating protests in front of the Beverly Hills Hotel, owned by the Sultan), I must say their complex cuisine and rich flavors are a counterpoint to be commended. With that, I will say “Makan Makan!” in Malay, meaning “Eat Eat.” The food of Brunei is truly divine!