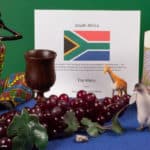 How did South Africa get its name?

South Africa was simply named for its geographical location on the southern tip of Africa.  Officially it is known as the Republic of South Africa.  It is also known as the Rainbow Nation, a name given by Archbishop Desmond Tutu, after its first democratic election in 1994, once apartheid ended.  It’s a metaphor for the coming together of all the different ethnic groups who live in South Africa.  There are officially 11 recognized languages in South Africa, each having a unique name for South Africa in their own language.

Where is South Africa located?

It is located on the southernmost tip of the continent of Africa. It has a large, 1759-mile coastline along the South Atlantic and Indian Oceans.  To the north it has several neighbors; Namibia, Botswana and Zimbabwe.  Mozambique and Estwatini (Swaziland) are to the northeast.  South Africa also completely surrounds the little country of Lesotho.  Madagascar is just off the east coast.

South Africa is blessed with diverse topography.  The great Escarpment forms the longest continuous topographical feature and provides spectacular scenery.  Table Mountain is a flat topped mountain overlooking Cape Town and is one of its most recognized landmarks.  It is a popular tourist attraction with about 900 routes to climb or hike.  It is one of the oldest mountains on the planet, estimated to be over 260 million years old.

South Africa has beautiful beaches with epic marine life, desolate deserts, massive nature preserves, bush, grasslands, mountains and subtropical forests and even a floral kingdom.  South Africa is home to magnificent Safari parks, like Kruger National Park, which is one of the largest game reserves in all of Africa and also an UNESCO site.  There you can find the notorious big five: lion, leopard, elephant, black rhinoceros and African buffalo.  There are also over 500 bird species, 100 reptile species and 150 species of mammals.

A Brief history of South Africa

Somewhere around 250 CE the Bantu people began to migrate into South Africa from the north bringing with them iron tools and knowledge of farming.  Many of the people that live in South Africa today speak some form of a Bantu language. The oldest human remains, believed to be 160,000 years old, were discovered in South Africa.

The first Europeans to come to South Africa were the Portuguese in 1488.  Bartolomeu Dias sails around the southern tip of Africa and names it the Cape of Storms.  John II of Portugal changed the name to the Cape of Good Hope as he felt its discovery that India could be reached by sea from Europe was a good omen.

It wasn’t until 1652 when the Dutch East India Company established the Dutch Cape Colony.  It was meant initially to just be a small port town for ships traveling to India, but eventually became a full settlement.

The British arrived in the late 1700s and many battles for control happened between the Dutch and the British.  In 1814, the Dutch formally agreed that the colony was part of the British Empire.  In 1833 slavery was abolished by the British. The Great Trek was begun by the Dutch settlers called Boers, as they moved inland and formed their own Boer Republics, called the Orange Free State and Transvaal.  Labor was brought in from Asia and India.

In 1866, diamonds were discovered at Kimberley and in 1886 gold was discovered.  The city of Johannesburg grew rapidly due to the gold rush.  Today, Johannesburg is the largest city in South Africa.  During this time there were two Boer wars.  The second war in 1889 was won by the British and they took over the two Boer republics.  Also during this time many more Europeans moved in, including Germans, French and English settlers who became known as the Afrikaners.  About 1/5 of the world’s gold comes from the mines of South Africa.

In 1934, the Status of the Union Act declared South Africa’s Independence from the United Kingdom.  In 1939, when World War II began, South Africa served as a valuable sea port for the Allies.

In 1948, the National Party was voted into power.  They started a policy called apartheid.  This is where people were separated based on their race, particularly whites and blacks.  The white people ruled the land, even though they were only about 20 percent of the population.  In the 1950s, the African National Congress, (ANC) and other groups protested against apartheid.  These protests almost always ended with brutality and widespread massacre by police.

Despite improvement since the end of apartheid, poverty and unemployment still remained high.  South Africa is just now considered to be a middle-income, emerging market with an abundant supply of natural resources.  Their stock exchange is Africa’s largest and among the top 20 in the world.

South African culture is complicated, dubbed the Rainbow nation, due to so many diverse cultures coming together.  It is the unification of these cultures that contributes to its uniqueness.  As South Africans have become increasingly urbanized and westernized, aspects of traditional culture have diminished.  However, the South African majority still has a substantial number of rural inhabitants and this is where the cultural traditions thrive most strongly.

South Africa has a population of about 57 million.  Eighty percent are black African, about nine percent colored, (a term used in South Africa for persons of mixed race, ancestry who developed a distinct cultural identity over several hundred years) eight percent are white and the balance are Indian or Asian.  HIV/AIDS hit South Africa extremely hard, affecting about 20 percent of the black population.  Life expectancy plunged to less than 43 years in 2008 but has since recovered to almost 63 years, and continues to improve.

Christianity is the main religion in South Africa, with 86 percent of the population devoted to it.  Ancestral, animist and tribal African religions make up about six percent, with the balance being Muslim, Hindu or atheist.

There is a great diversity in music that stems from South Africa.  Many black musicians developed a unique style called Kwaito.  This grew in popularity after apartheid died and when musicians began to sing in traditional African languages.  South Africa has also produced world-famous Jazz musicians.

South African cuisine is heavily influenced by the Dutch, British, Indian and Cape Malay immigrants.  The famous South African Braai is what we know as barbecue throughout the rest of the world.  Meat is common and popular; sheep and goat are loved but beef is the most prized.   Ostrich is a consumed meat, as is Springbok; both low in fat and high in protein.  However, you usually won’t find a braai without their famous boerewors (coiled shaped sausage) sizzling on it.  Biltong, a dried meat snack, similar to a beef jerky, is beloved.  Seafood and fish are also main ingredients in dishes along the coastal cities and rivers.

Other famous South African dishes are Bobotie; a curried meat dish with a custard topping and considered to be the National dish.  It is always served with yellow rice, called geelrys.  Stews are also very popular, called potjiekos, literally translated this means “small pot food.”  This stew is often cooked in a three legged, cast iron pot, outdoors.  Bunny chow, of Indian origin, is another unusual dish.  It is a quarter of a loaf of bread, stuffed with curried meat and cheese, and is popular throughout the country.

More traditional cuisine includes pap, a porridge somewhat similar to grits, along with chakalaka, a vegetable dish.  Many stews and desserts are made from vegetables like pumpkin and squash as they are easily grown in local gardens.  The mopane worm, which is actually a caterpillar, is a unique treat that is either dried or fried and considered a delicacy.

The French brought their wine techniques to South Africa and now they have become a leader as wine producers.  In fact, they have the longest wine route in the world, which stretches over a span of 620 miles.  A major tourist draw for South Africa is their variety of wines.

South Africa also grows a surprising amount of fruit, especially exotic fruits, in the sub-tropical region of the country.  Desserts are also loved, with malva pudding and melktert and koeksister (fried dough) being just a few of the most popular. 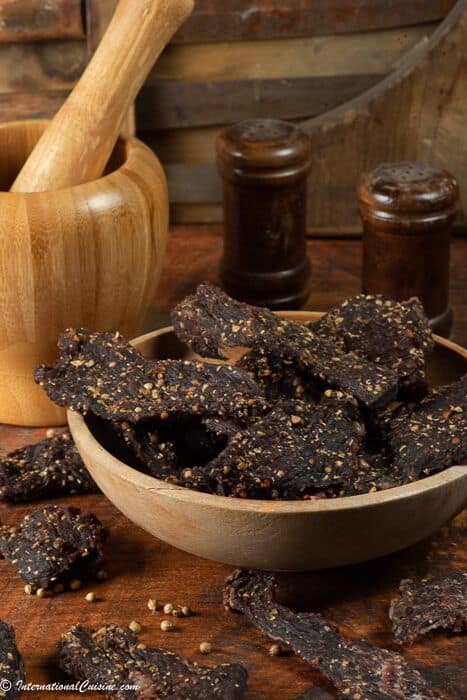 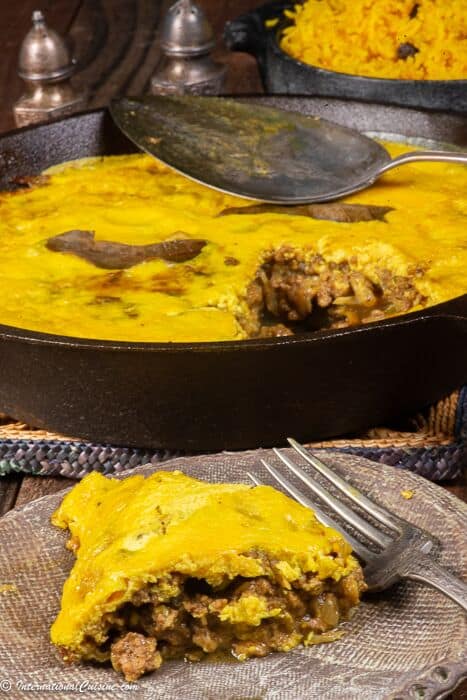 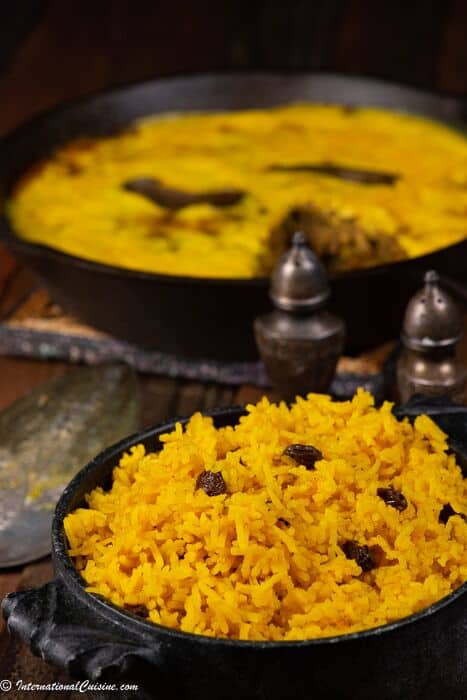 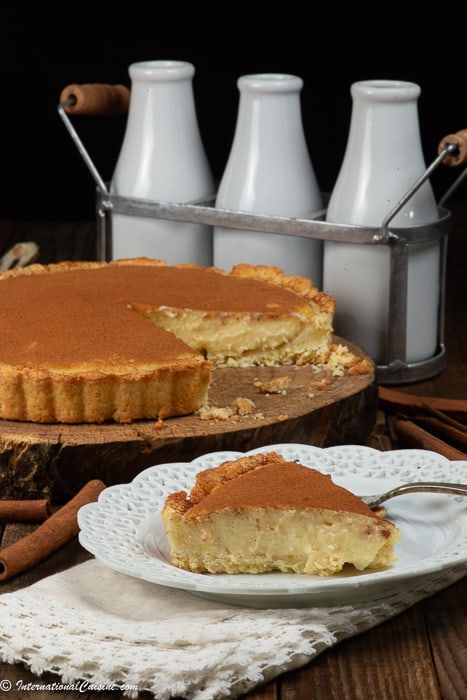 We set the scene with a photo candle featuring the national flower, the King Protea, then added a few statues of safari animals as well as a penguin. Yes, they have penguins in South Africa and you can even swim with them near Cape Town.  A gold and diamond ring were added to represent South Africa’s robust mining. Grapes were placed to represent their wine industry.

Our first course was the famous biltong, a dried cured beef that was flavored with coriander, sugar and vinegar.  It was quickly devoured and it is clear to see how you can never get enough biltong.

For the main course, we savored the national dish called Bobotie; a flavorful, curried, minced meat casserole with an egg topping.  It is a true comfort food that is always served with a yellow rice called geelrys, that gets its color and flavor from turmeric and curry.  It was a wonderful combination.

For dessert, we enjoyed the famous melktert.  The milk tart was light and not too sweet.  We loved it!

After our delicious South African meal, we watched the documentary film called, Mandela: Son of Africa, Father of a Nation.  Nelson Mandela has been a true inspiration.  I leave you with just a few of my favorite Mandela quotes:

“A winner is a dreamer who never gives up.”

“There is no passion to be found playing small – in settling for a life that is less than the one you are capable of living.”

“What counts in life is not the mere fact that we have lived. It is what difference we have made to the lives of others that will determine the significance of the life we lead.”

“When people are determined they can overcome anything.”