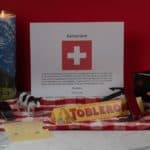 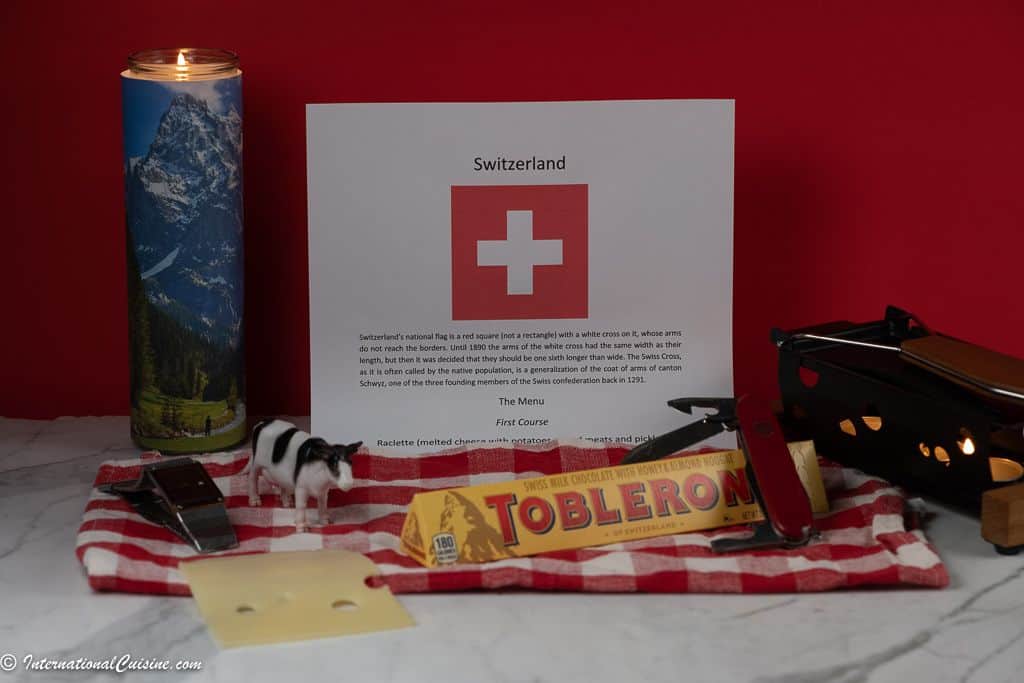 How did Switzerland get its name?

The name Switzerland comes from one of its original provinces (known as cantons) called Schwyz.  The etymology of Schwyz is uncertain, but believed to be derived from a Germanic name.  The English adjective, Swiss, is derived from the French, Suisse, which has been used since the 16th century. The Swiss call their country Schweizerisch.

Where is Switzerland located?

This small, mountainous country famous for the Alps, is located in Central Europe.  It is a landlocked country that lies between France and Italy and is also bordered by Austria, Germany and Liechtenstein.  The majority of the population lives in the plateau, between the high Alps, which includes the famous Matterhorn in the south, and the Jura mountains, in the north.  It is beautiful; a home to some 7000 lakes that are so clear, you can see all the way to the bottom.  The largest is Lake Geneva, which is shared with France, where it is known as Lac Leman.

A Brief History of Switzerland

Switzerland originally was inhabited by Celtic tribes.  In the first century BC, Rome conquered the land, and it was a Roman province for 500 years.  In 1291, the families of Unterwalden, Uri and Schwyz formed a union of the three cantons and became an independent country.  It is one of the oldest nations in Europe.  It became formally independent of the Holy Roman Empire in 1499. Napoleon invaded the country in 1797, however he was defeated.  The Congress of Vienna gave Switzerland the status of permanent armed, neutrality in 1815.

The constitution was adopted in 1848 and took many of its principles from the US Constitution.  It does not allow for troops to be sent to serve in foreign wars. They have remained neutral in conflicts around the world, including both major world wars.  Military service is compulsory for Swiss men, aged 18 and over.  Switzerland is one of the most armed civilian nations but has one of the lowest crime rates.  Once they finish their service, all of them are supposed to take their assault rifles or pistols home, however without any ammunition.  The country is made up of 26 cantons, which form the confederation.  Independence Day is celebrated on August 1st, when the Swiss Confederation was founded back in 1291.

Switzerland has not fought an international war since 1815.  They joined the United Nations in 2002 and has its second largest headquarters is in Geneva. They pursue an active foreign policy and are frequently involved in peace-building missions around the world.  Switzerland is also the birthplace of the Red Cross; one of the world’s oldest and best known humanitarian organizations.

They are not part of the European Union, maintaining their own currency, the Swiss franc.  They are part of the Schengen Area, as one of the 26 participating countries.  Switzerland has the highest nominal wealth per adult, ranks eighth highest for GDP, and has been considered a tax haven.

Switzerland is home to about 8-½ million people. They are highly educated and considered very smart.  They have a large immigrant population.  It is a diverse and multilingual country with four national languages including German, French, Italian and Romansh.  Each canton has its unique cultural features and many dialects.

The Swiss Alps have played a major role in creating the history and cultural diversity of Switzerland. Nowadays, all mountain areas have a strong skiing and mountaineering culture and are associated with folk arts like the alphorn and yodeling.  Embroidery and wood carving are also important traditions.  The Swiss chalet is also an important architectural heritage.

Switzerland ranks second highest in the world after Japan for life expectancy.  Perhaps it is the clean, mountain air and a society that loves nature and enjoys high quality health care.  Switzerland ranks top in the world in many categories, like having the highest salary and job security, low unemployment rate, and two of the most livable cities, being Zurich and Geneva.  It is not cheap to live in Switzerland.  In fact, Zurich is listed as the world’s third most expensive city to live in.  They are considered one of the smartest countries, especially in math and science, and it is where Albert Einstein developed his famous formula, e=mc2.  They also have produced numerous Nobel Laureates, most coming from science.  Switzerland is probably most renowned for its banks and watches.

Switzerland was historically a country of farmers, so traditional dishes tend to be plain and made from simple ingredients.  Many Swiss favorites are variations and combinations of potatoes, meat and cheese with different types of sauces.

One of the most well-known dishes is, cheese fondue.  Especially when made with melted cheese, like gruyere and emmentaler.  Along with a touch of wine and dried bread cubes served in a traditional pot called a caquelon, it is beloved.  Another favorite is the cow’s milk cheese, called raclette.  It is cooked by heating the cheese and scraping off the melted part and serving with potatoes, onions, gherkins and cured meats.  The national dish is considered to be rosti.  It was originally served for breakfast in the canton of Bern.  It is made from grated and cooked potatoes, similar to hash browns, or on a fritter but today, is served plain or with add-ons.

Muesli, is a Swiss invention from the early 1900s. It is a breakfast dish of rolled oats with dried or fresh fruits, nuts and seeds.  It is typically served with milk or yogurt and is now found all over the world.

Of course, the Swiss are also known for chocolate and are likely the best chocolate experts in the world.  Lindt and Cailler are world-famous.  The Swiss make about 180,000 tons of chocolate each year, and about 11 kilos are consumed per person, each year.  Despite this, they have the lowest obesity rate in all of Europe.

Switzerland has a unique position to incorporate the best culinary traditions of its neighbors; namely: France, Italy and Germany, as well its own national and regional specialties, making it a culinary delight.

So let’s enjoy a Swiss meal: 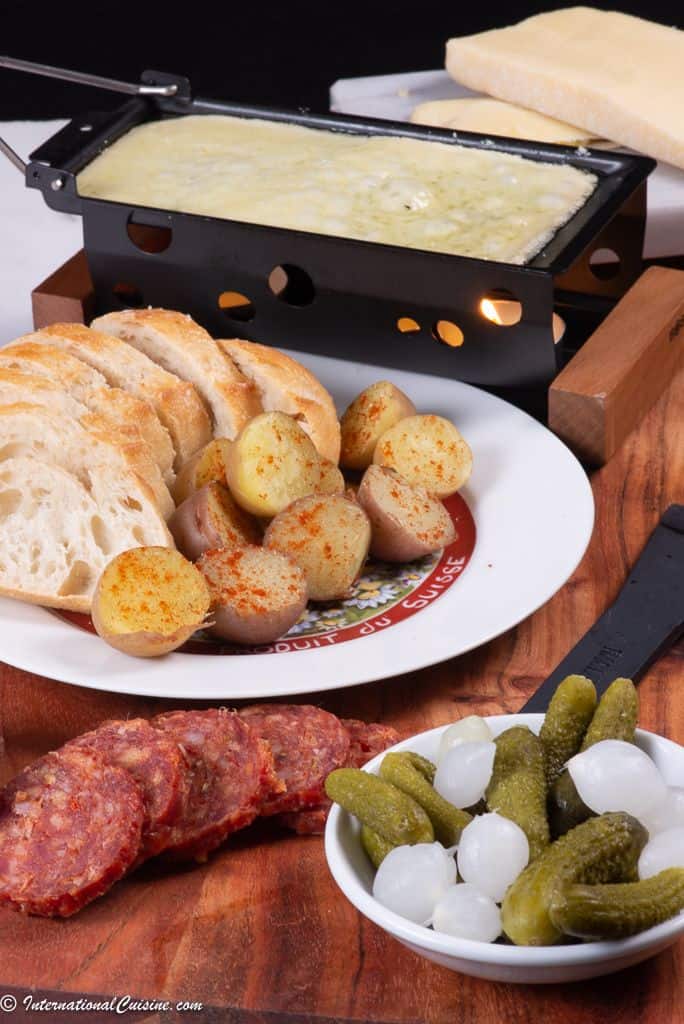 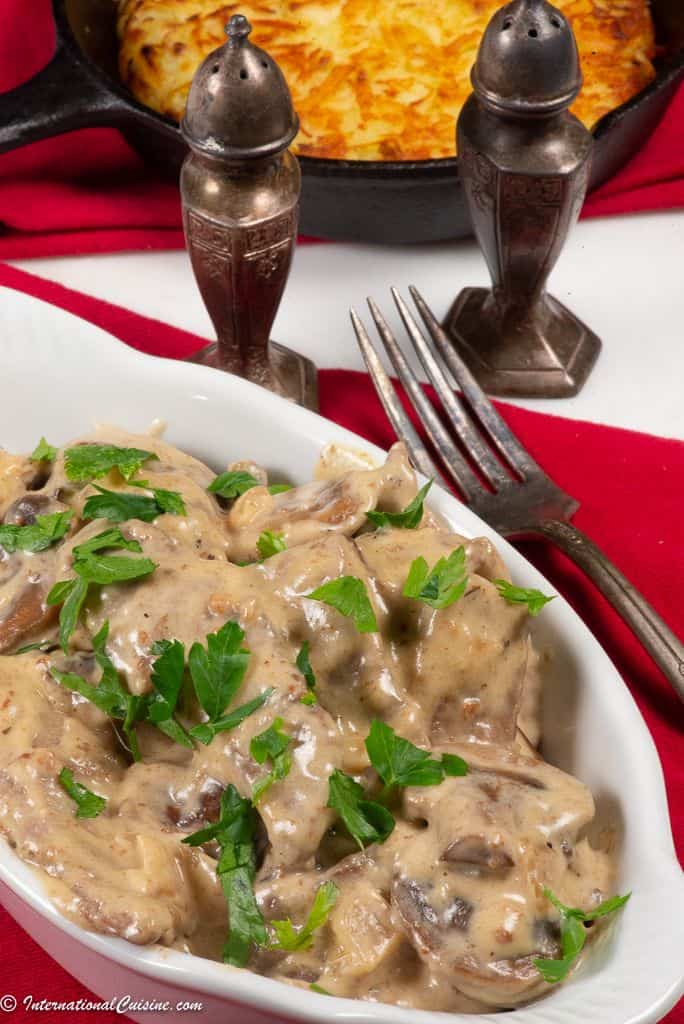 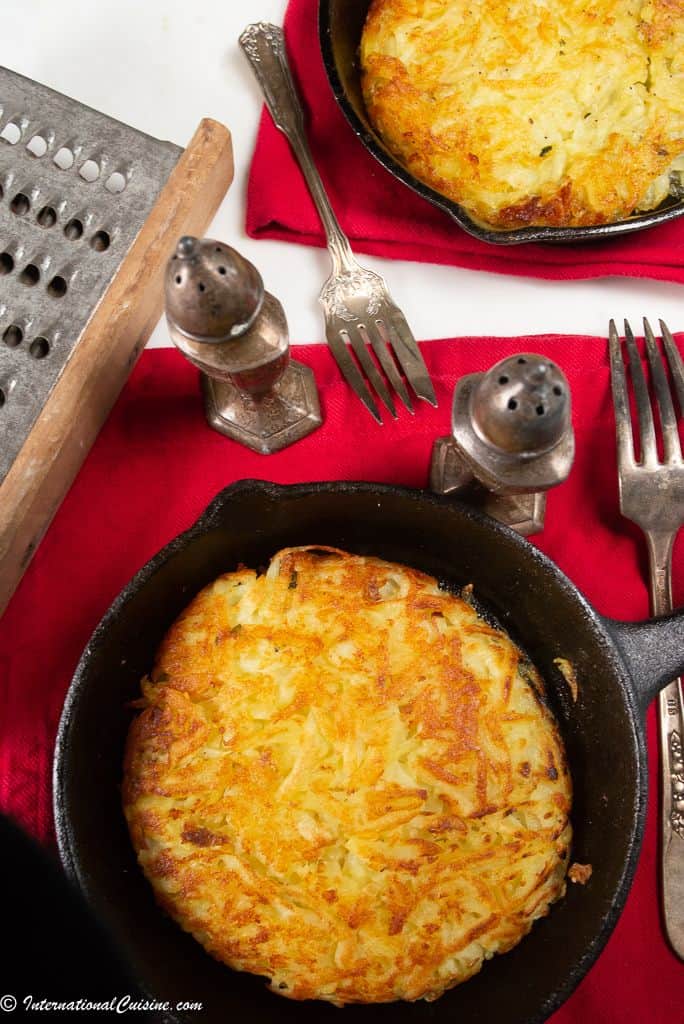 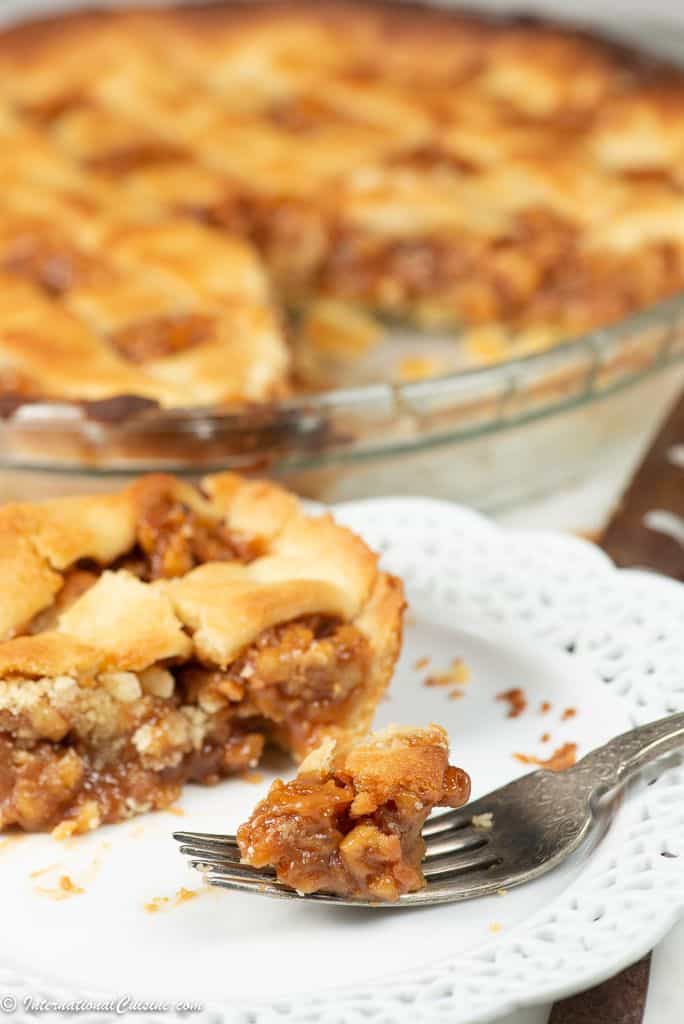 We set the scene with the colors of the flag; red and white.  We decorated with a raclette grill, a picture of the famous Matterhorn, a Swiss army knife, a Swiss radio watch, a tube of Toblerone chocolate, a cow figurine and some Swiss cheese.

Our first course was the delicious raclette; melted cheese.  I bought a raclette grill, and I am in love.  Who wouldn’t be, with things covered in melted, delicious cheese?  It is a popular way to throw a dinner party these days and there are all sorts of fun raclette grills you can buy to cook for a crowd.  If you haven’t ever tried this, I would highly recommend it.

Our main course was a typical Swiss dish; the Zurich style, veal in cream sauce.  It was divine!  Tender pieces of veal were smothered in a hearty, cream sauce.  It was served with what is considered to be the national dish of Switzerland, rosti!  This is a crispy and delicious potato fritter which added a lovely texture to the meal.  Rosti could be enjoyed with any meal of the day.

For dessert, the walnut pie called, Engadiner Nusstorte, was the epitome of a pie.  Although the crust was a bit tricky to work with, it is a simple recipe that is well worth the effort.

We enjoyed our meal with a bottle of Swiss wine; one of Switzerland’s best-kept secrets.  They have been growing grapes in the region since Roman times.  The Swiss love their wine and actually don’t export too much of it.  One of their most famous wine growing areas is actually a UNESCO World Heritage Site which dates back to the 12th century, when monks planted the Dezaley vineyard in terraces on the slopes next to Lake Geneva.  When you enjoy your Swiss wine, you can say “Cheers” with “Sante’, Proscht” or “Salute,” depending on the language of the area.  Just make sure you look the person in the eye when you clink your glasses.

After dinner, we sat down to enjoy the movie Heidi, based on the famous children’s book’s written by Swiss author, Johanna Spyri, back in 1881. Heidi is a lovely story, sure to warm the heart.