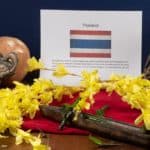 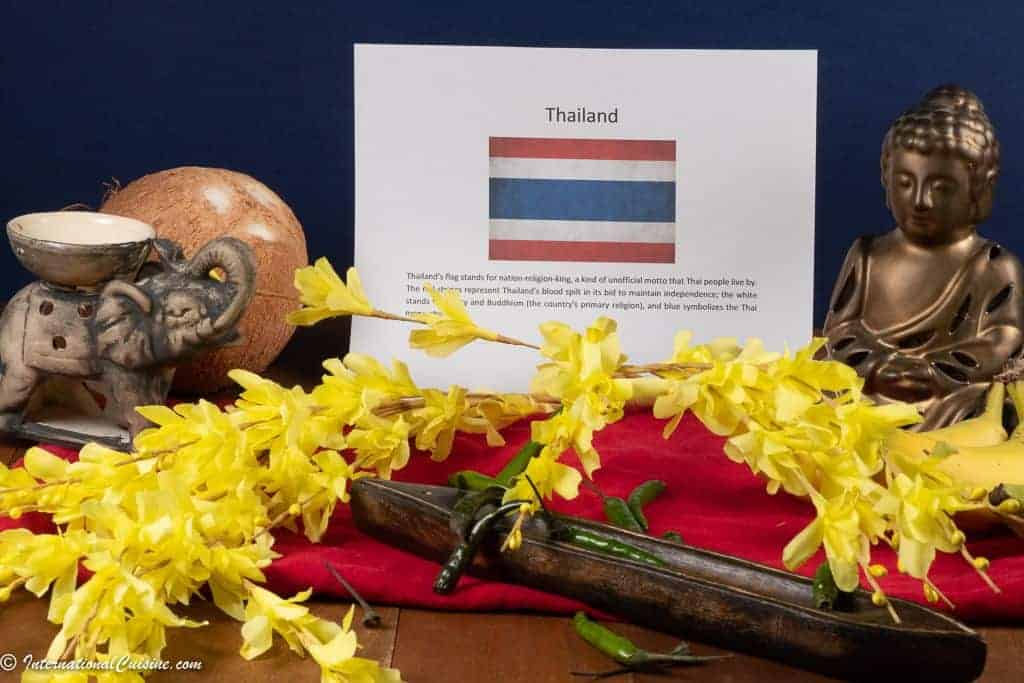 How did Thailand get its name?

Prior to the country being named Thailand in 1939, it was called Siam.  Siam comes from a Sanskrit word meaning “dark or brown,” referencing the color of the natives’ skin.  The country was called Siam once again for a brief period between 1946 and 1948 and has been called Thailand ever since.

Formally, the Thai people call their country prathet Thai but informally they call it mueang Thai. This is a way to differentiate the place from the people and the language.

Where is Thailand located?

Thailand is in the heart of Southeast Asia.  Its neighbors are Myanmar, to the west, Laos, to the north and east, Cambodia, to the southeast, the Gulf of Thailand, to the south, Malaysia, also to the south on the peninsula and the Andaman Sea, to the west.  If you look at the shape of the country on a map, many say it resembles an elephant’s head.  The elephant is the national animal of Thailand.

The country has forested mountains, hidden waterfalls in lush jungles, rich, fertile rice fields, plains, and a long-rugged coastline along the Gulf of Thailand and the Andaman Sea. It is also home to 400 Islands with glorious beaches, most of them in the Andaman Sea.

Generally speaking, Thailand has a tropical climate.  It is hot and humid.  The best time to visit is from November to March.  March through May has the hottest weather and June through October is the monsoon season.

A Brief History of Thailand

It is believed the ancestors of today’s Thai people began migrating from southern China about 5000 years ago. They worked their way south into Thailand, Burma and Laos. It was these migrants that formed the first city states in present day Thailand.

Multiple Kingdoms were established and abolished throughout the centuries.  It was the Chakri dynasty that ascended to the throne on April 6, 1782 and has remained in power ever since. King Rama, moved the capital to the east bank of the river and it became known internationally as Bangkok (The City of Angels.)

In 1932, King Rama VII approved the constitutional change from an absolute monarchy to a constitutional monarchy.  This marked the beginning of a democratic form of government in Thailand.

Democracy is never easy and since that time there have been several coup d’état attempts and martial law has had to be evoked on more than a few occasions.  Today the government focuses on economic development, and international relations.

The people of Thailand still revere the monarchy and the king.  The motto is “Chat, Satsana, Phra Maha Kasat,” which means “the king serves as the traditional knot,” that binds the whole nation.

Thailand is also referred to as “The Land of Smiles.”  The people are very friendly, hospitable, and kind. It is something you will notice right away.  But don’t be fooled by every smile.  Each smile has a different meaning as the Thai people literally smile through virtually every situation. There are at least 13 identified, distinct smiles with different meanings, in Thai culture.

The official language of Thailand is Thai, which is taught in schools, along with English.  There are a few different dialects of Thai, especially in the very southern and northern parts of the country.

About 95 percent of the country is Buddhist.  Although Thai people have freedom of religion written into the constitution, the King is required by law to be a Theravada Buddhist.  It is no surprise that there are about 40,000 Buddhist temples throughout the country. Historically, nearly all males have been a monk at one time in their life, usually before the age of 20. 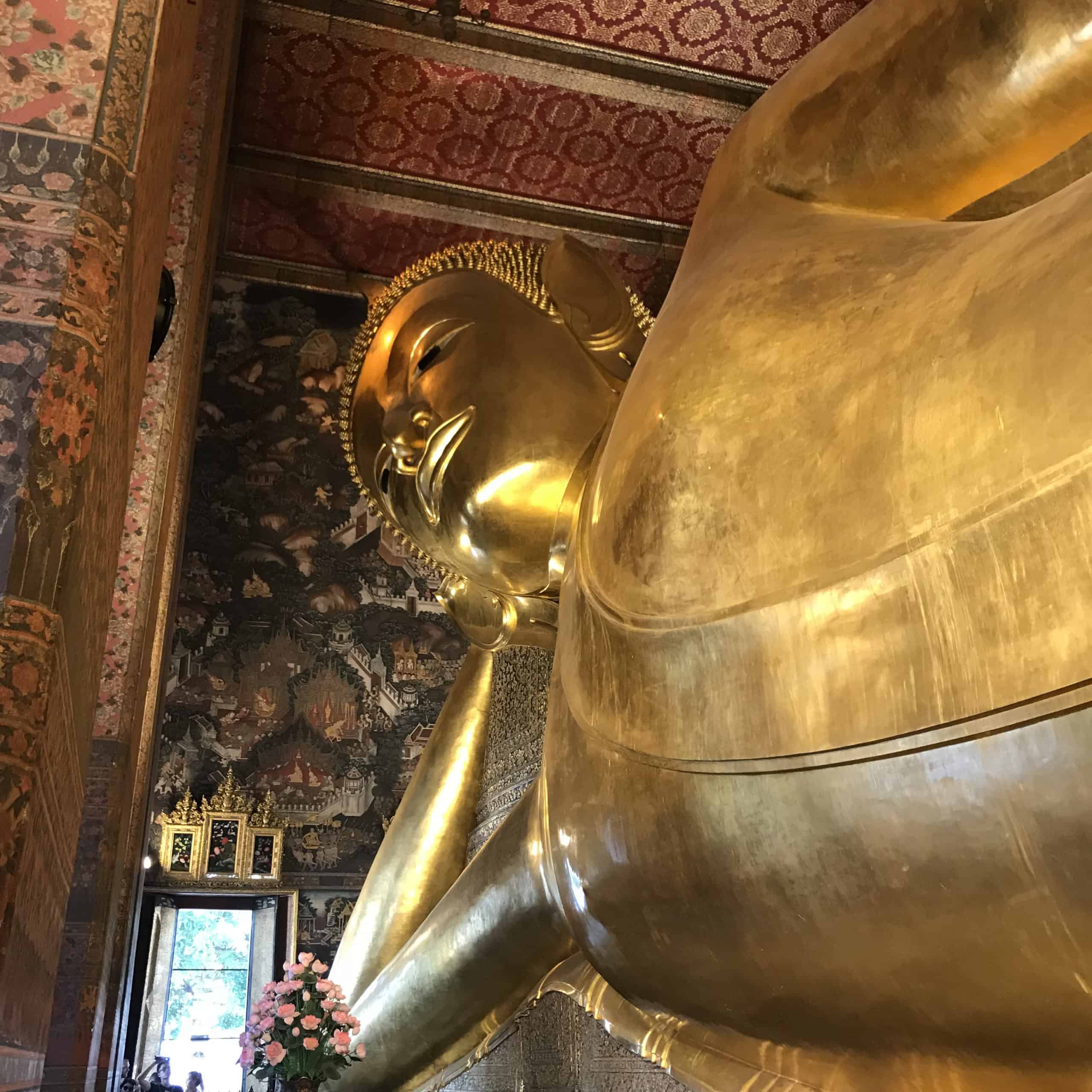 The very small remainder of the population are Muslim, especially in the southern region of Thailand near the Malaysian border and there are a few Christians scattered throughout the country.

When you are greeted by a Thai person, you will likely encounter a gesture called wai . It is a beautiful and welcoming greeting where they put their hands in a prayer position with a slight bow of the head.  The lower they bow their head and the higher they raise their prayer hands indicates their level of respect for you.

The elderly are revered in Thai culture, as is family. Cousins are often referred to as brothers and sisters and extended family often live together or very near each other.

Prior to Buddhism in Thailand, many centuries ago, Spirit worship or animism was practiced.

Thai households still have what is known as a spirit house called san phra phum or phi houses.   Typically, they are little colorful, intricate, shrines dedicated to the guardian spirits of the land and are in the front of homes, businesses, parks, and highways.  Daily offerings are made in the form of incense, candles, flowers and even food and drinks.

Although Thailand is developing and becoming more modern, one of its most charming features is how rituals and traditions are passed down from their ancestors.  Thais learn from a very young age to worship and respect the spirits around them.  They believe that by honoring the spirits, it will bring peace and prosperity to them and to their loved ones.

Thailand is also known for several celebrations and festivals.  Some of the most popular are Songkran aka the “Water festival,” Loy Krathongor “the Festival of lights,” Visakha Bucha which is “Buddha’s Birthday,” and they celebrate the King and Queen’s Birthdays as well.  There is also a “Monkey banquet festival,” where they literally have a feast for the resident monkeys to thank them for bringing in tourism.  Chinese New Year is also celebrated in Thailand.

Thai cuisine is famous throughout the world.  It is not by accident, as the government of Thailand has wisely subsidized numerous Thai restaurants in other countries as an introduction to their delicious food.  It is no wonder that many people travel to Thailand simply for the food.

Thai food is known to have a wonderful balance of flavor with a combination of five tastes: sweet, sour, salty, bitter and spicy.  Like most countries, Thai food is different depending on where you are, having its regional specialties.  It also has many influences from southern Chinese and Indian cuisines as well as from its other neighbors.

They are also famous for exotic fruits like mangosteen, which is considered the national fruit and the stinky durian fruit, which is something you will love or hate, as well as dragon fruits, coconuts, passion fruit, bananas, lychee etc.  While traveling through Thailand you will see “NO Durian” signs in hotels, on elevators and in public transportation.

Thais use a mortar and pestle for many dishes and if you don’t have one you must get one.  You simply can’t get the proper result without one, especially when making curry paste.  The pounding of the ingredients in the mortar, releases oils from the chilies and herbs and spices that simply are not there when you use a processor or blender. I personally find the process therapeutic, as well. 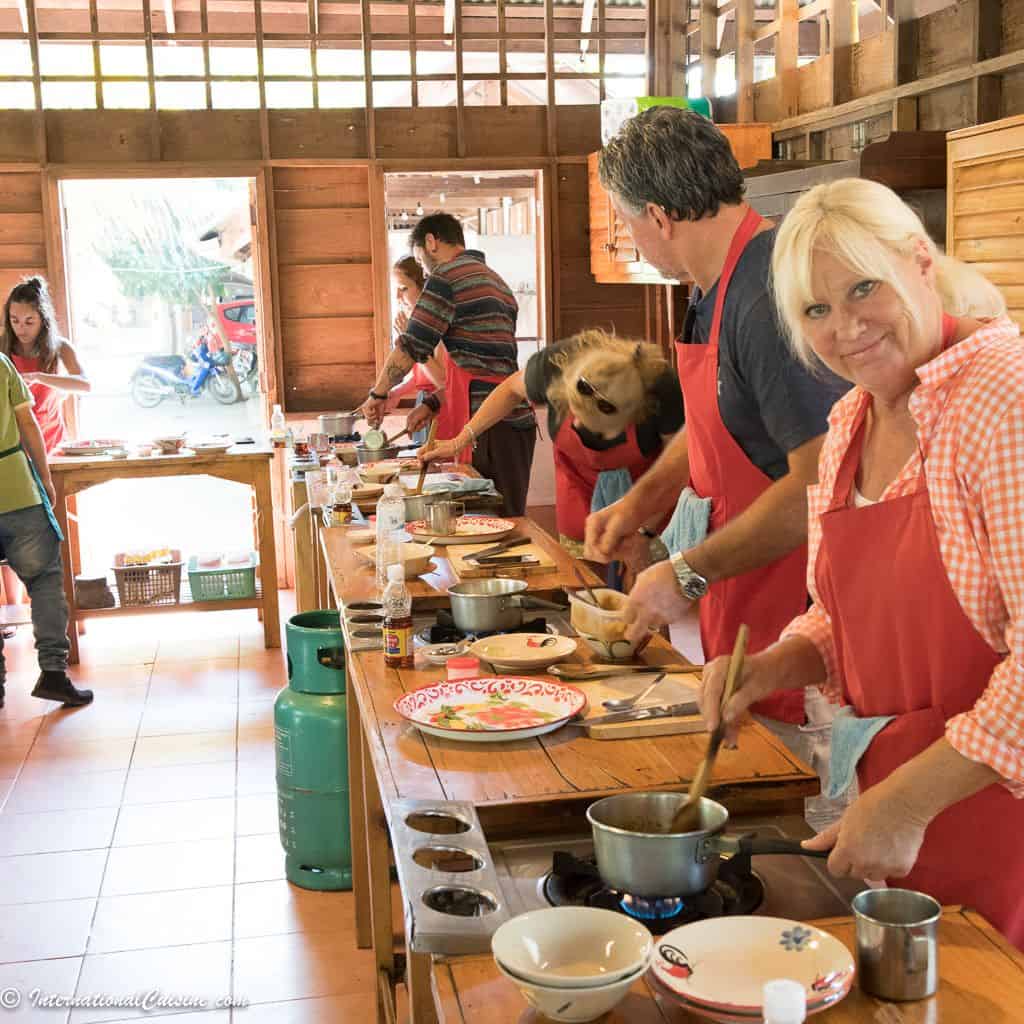 Street food is ubiquitous in Thailand.  It is cheap and simply delicious.  Whether you go into an establishment or eat on the street, there are several Thai dishes one must try.  The beauty of street food is that each stall has a specialty and if there is a line, well you can be sure their food is amazing.

We went to a night market in Chiang Mai and saw the woman that was featured on an episode on Anthony Bourdain’s “Parts Unknown.”  She was very popular before the show but is now famous in the market.  Her signature style is the cowboy hat she wears.  Expect to wait a long time for her famous pork knuckle, served over rice with a sauce, pickled mustard greens, and one half of a hard-boiled egg,  It is absolutely worth the wait! 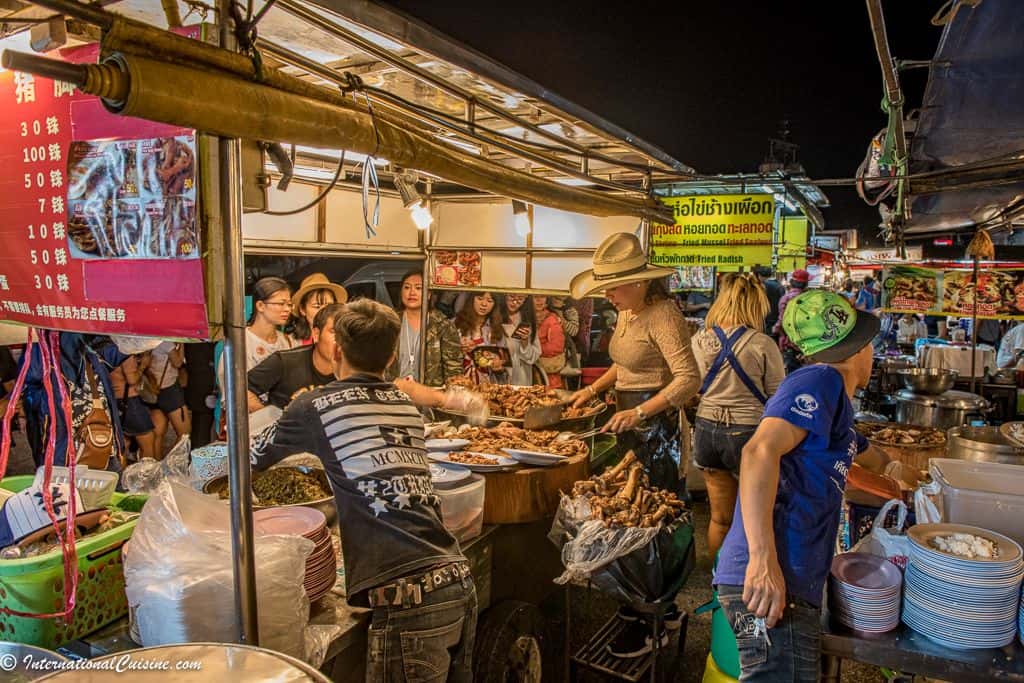 So, let’s enjoy a Thai meal: 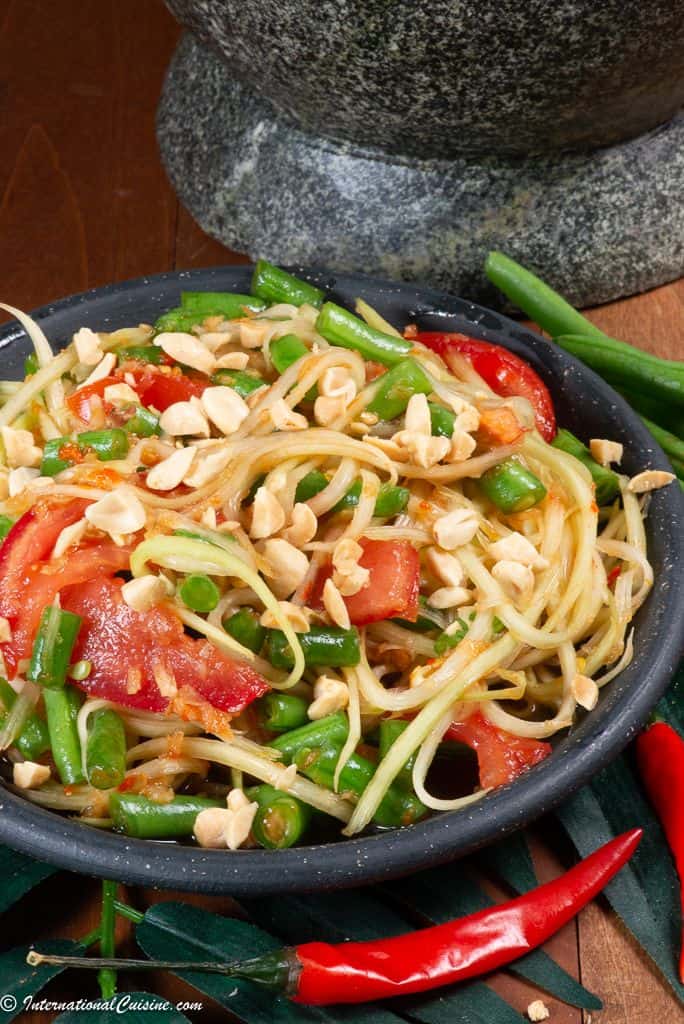 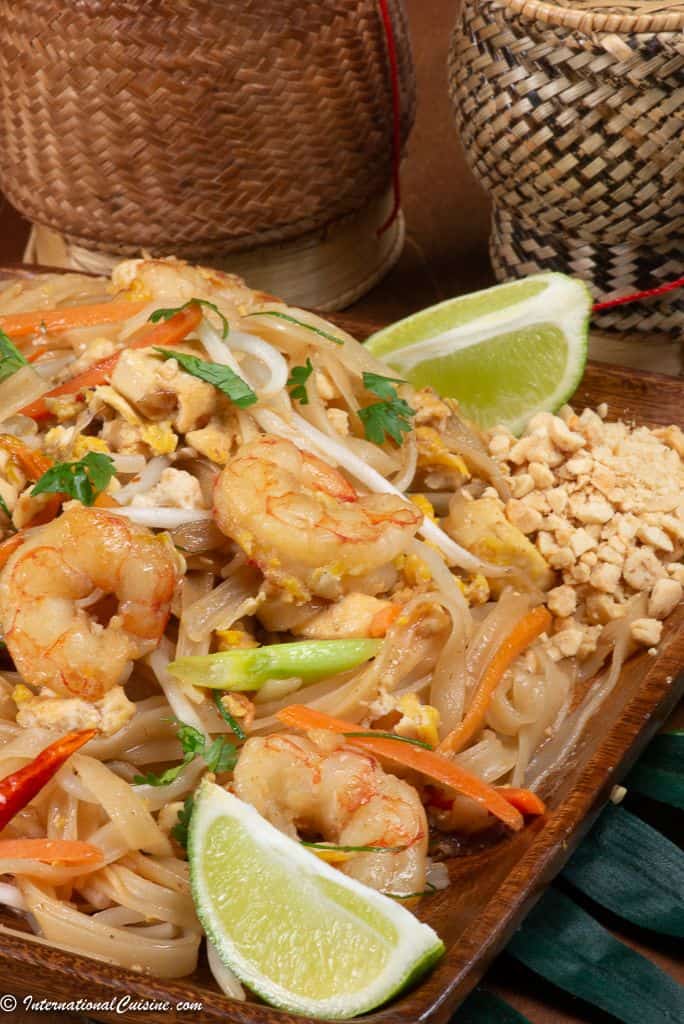 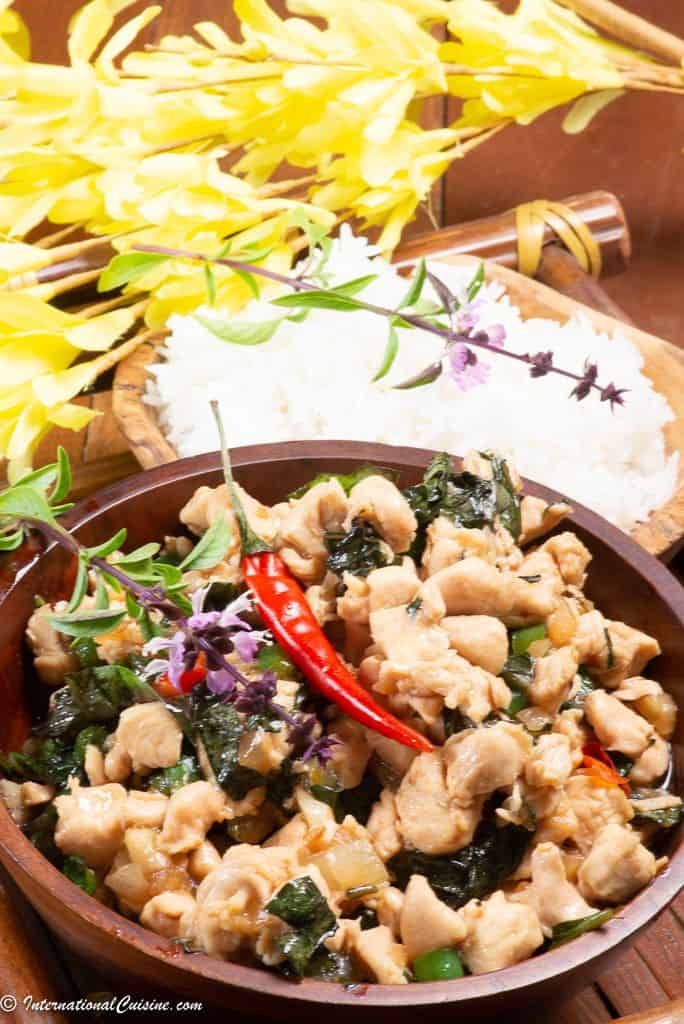 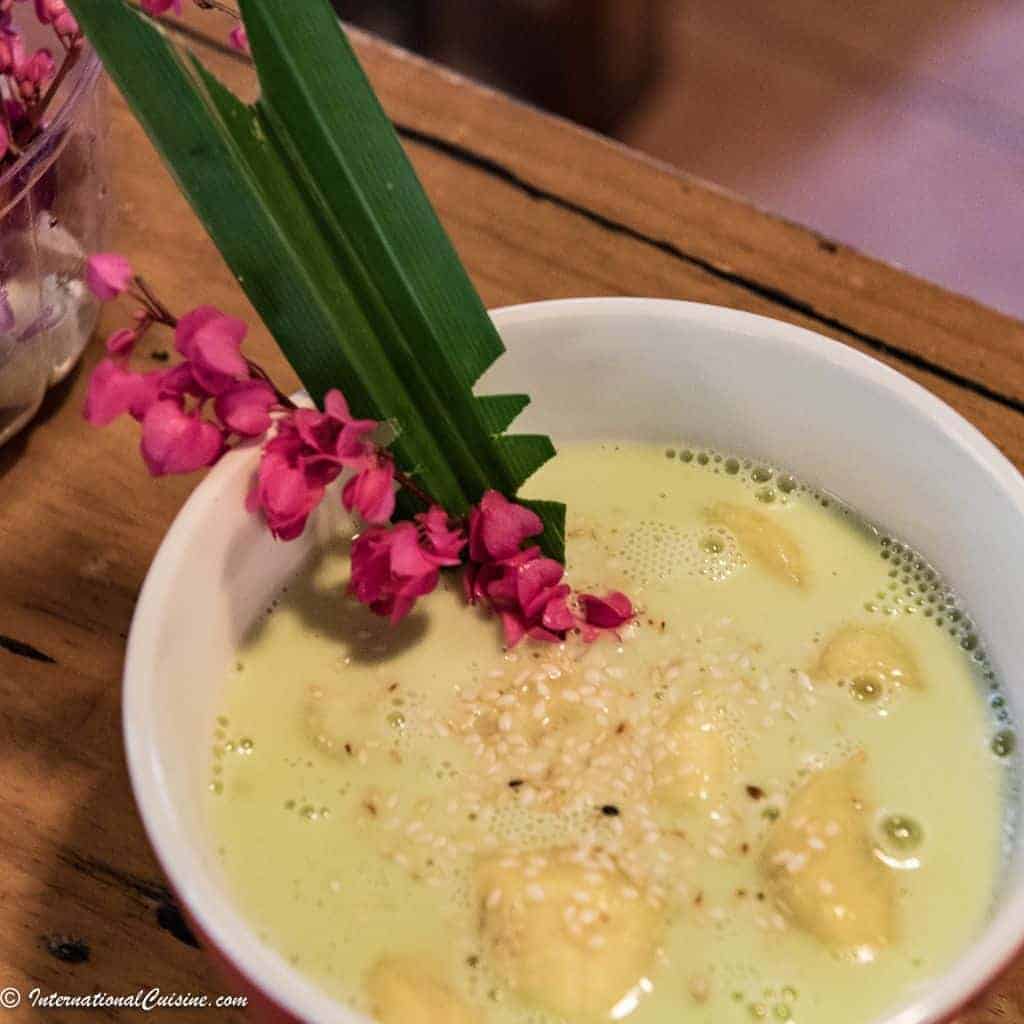 We set the scene in the colors of the Thai flag; red, white and blue.  Red, represents the blood spilled for their independence, white is for purity and Buddhism, and blue is for the monarchy.

We placed a Buddha statue, an elephant candle holder, (as the elephant is their national animal) and the national flower, which grows on a tree that is called the golden shower or dok koon.  We also placed a wooden long boat to represent the main mode of transportation.  Thai chilies, and a fresh coconut completed the setting, representing two prevalent ingredients in their cuisine.

We began by first learning Thai dining etiquette, which is a little different.  We sat on a bamboo mat with our feet tucked under our body. It is considered rude to have your feet pointing at a person or even a statue while dining.

Generally, Thai people eat with a spoon in the right hand and a fork in the left. The spoon is the main utensil, with the fork assisting in getting items onto the spoon.  A knife should never be necessary as Thai food is served in bite size pieces and can easily be cut with the side of the spoon or fork.  Chopsticks are sometimes used for noodle dishes.

We served the som tam green papaya salad as the starter.  It is one of my all-time favorite salads.  Much of the world agrees and  it has been listed on CNN’s poll of the top 50 dishes of the world.  It perfectly strikes the balance of flavors for which  Thai cuisine is famous.  The Thai chilies can be quite spicy, so when you make it, be sure to add them based on your heat tolerance.  This is a wonderful, refreshing salad that you will love.

The other dishes were served family style (all at once,) which is customary in Thai cuisine.  Rice is always served, whether it be sticky or Jasmine. Rice is extremely popular and is Thailand’s biggest export.  When you ask someone “Have you eaten yet?” you would say ,”Heaw Kaow,” which translates to “Would you like rice?”

Pad Thai is the national dish of Thailand. It can be found all over the world.  It is one of my favorite dishes especially when served with shrimp, but it is sometimes made with chicken, pork or just tofu.  You will be surprised how quick and easy it is to make this at home.  I love the accompaniments of lime, and peanuts.

The other dish was had was chicken with Thai basil and both of which we loved served with rice.

For dessert, we enjoyed bananas in coconut milk, simply flavored with a pandan leaf, and a touch of palm sugar.  It was a wonderful ending to our scrumptious Thai meal.

As we say goodbye to this magical country, I leave you with a brief photographic journey of our time there.  From Bangkok to Chiang Mai, we loved every minute of it.  We plan to return, not just for the extraordinary food but we want to experience the islands and more of their amazing Thai hospitality.