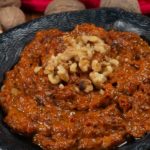 Muhammara is a hot pepper dip from Syria.  It is absolutely delicious and my new favorite little spread.  I served it with some Syrian pita bread for our appetizer, and it was a big hit.  Honestly, I think I am in love with just about anything that calls for pomegranate molasses.  This dip has such complex flavors and a wonderful texture that comes from the walnuts.  This one is a keeper! 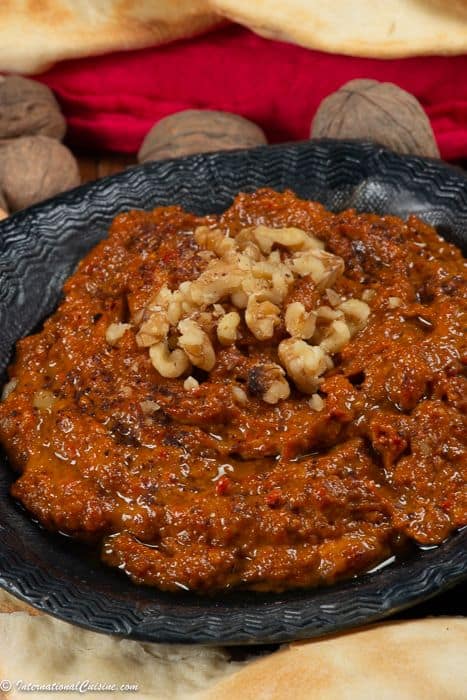 This recipe calls for a few unusual ingredients that you may not have in your panty, but you should get to know them.  Syria is famous for Aleppo pepper, and it is what gives this dish its kick.  I had already mentioned my fetish for pomegranate molasses, which I fell in love with when I cooked Iran. Lastly, sumac which is not a common spice, it is lovely, it has a hint of citrus to it and is often served on salads and this recipe calls for it as well.

This muhamarra is not a quick recipe to make, as you need to roast the peppers, but I really think you will love it, so I hope you do.

Did you know that the name Aleppo pepper comes from the area in Northern Syria where they are found?   The name of the actual pepper is the Halaby pepper.  It comes in at 10,000 on the Scoville scale which is about double a jalapeno.  The ground version however is made after the pepper is de-seeded, so it really is just a nice hint of heat. Once you try Aleppo pepper you will want to put it on everything you normally would put red pepper flakes on.  It is sort of like a combination of cayenne and sweet paprika but with a citrus note as well.

If you would like to learn more about this Middle Eastern country be sure to check out "Our Journey to Syria".  There you will also find some more delicious and authentic Syrian recipes like Baked Lamb Kibbeh and a semolina nut cake called h'risseh.