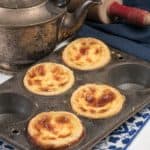 Pais de nata are ubiquitous in Portugal. You will find them in every pasteleria which are abundant on the streets of Portugal.   These cute little delicious bites are not at all easy to make but well worth the effort. You need to have a oven that can get up to 550 degrees F.

These pais de nata were invented by nuns as they used egg whites as starch for their habits as well as preserving wine. Therefore they came up with ingenious recipes to use the yolks, so lots of of their pastries include a custard.  These actually ended up being very close to the Pais de nata that you will find where they originated at the Antiga Confeitaria de Belem where they make some 22,000 per day!  There oven is a whopping 800 degrees, each worker has a task and has mastered it whether it be the dough, the filling and of course guarding the top secret recipe.  You should definitely use a thermometer when making the custard to get it just right.  You can pick one up here.

These pais de natat are delightful and well worth the effort, just take it one step at a time and you will be just fine. They are best enjoyed with a little shot of strong coffee that they call um bica.  These little espresso’s are only about 2-3 oz’s and perfect as a little pick-me-up.

Did you know that half of the “New World” belonged to Portugal?  Way back in 1494, the Treay of Tordesillas was signed and gave Portugal the eastern half of the New World.  It included Brazil, Africa and Asia.  This ended up making them the first global empire in history.  They were also one of the longest lived colonial powers.  It lasted for almost six centuries when Macau was just given back to China in 1999.  If you would like to learn more about this amazing European country be sure to check out “Our Journey to Portugal”.  Plus, there you can get more delicious and authentic Portuguese recipes.

Be sure to take note of the chill time a minimum of 2 hours is required and better if you can leave it overnight.  Try to remove as much flour as possible when working with the dough. The tart will get a bit tough otherwise. Make certain to preheat your oven for at least one hour before baking.