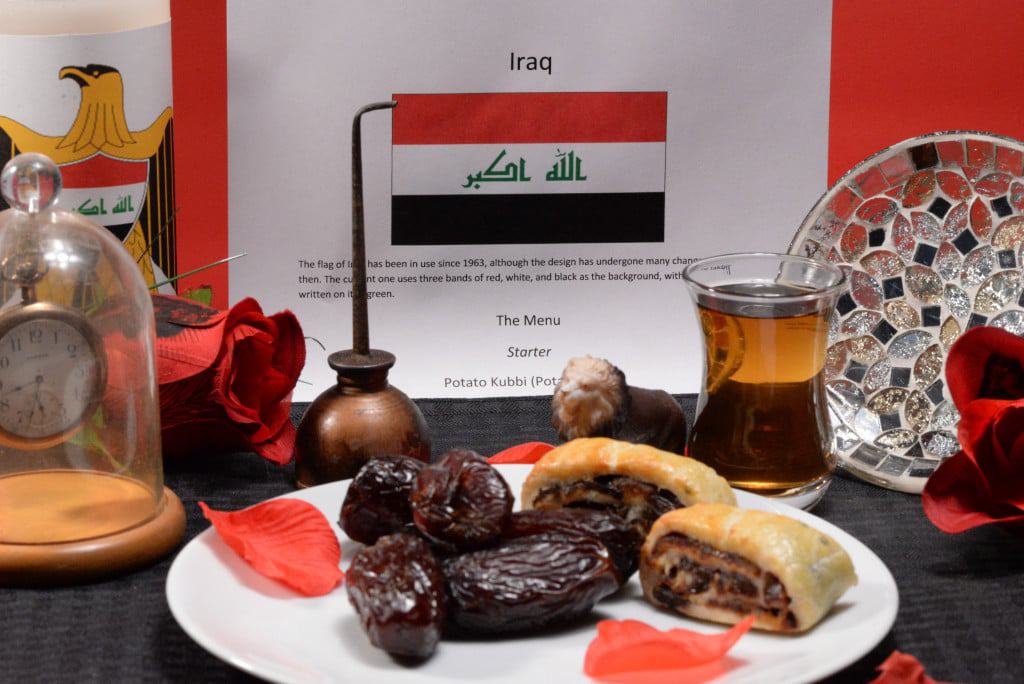 The “Cradle of Civilization” is how the country of Iraq is referred. The area between the two ancient rivers, the Tigris and the Euphrates, which meander through the country, have nurtured its people for ages. The name given this area for centuries was Mesopotamia. The word means, “between the two rivers.” Iraq, in Arabic means, “deep rooted or “the fertile.” There are many theories on how the country came to be named Iraq, but it is not known for certain.

Iraq shares borders with many countries: Kuwait and Saudi Arabia to the south, Jordan to the west, Syria to the northwest, Turkey to the north and Iran to the east. It also has a very small, yet important, coastline along the Persian Gulf. The capital city, is the ancient city of Baghdad that dates back to the Mesopotamian era.

The area called Sumer, situated in the south of Mesopotamia, was one of the earliest known civilizations in the world, dating back to 5000 BC. Tablets found in ruins left by these ancient people show recipes prepared in the temples during religious festivals. In reality, these are believed to be the first ever cookbooks in the world. Iraq is known as the birthplace of writing.

Iraq also gets credit for developing the wheel, the 360 degree circle, the 60-second minute, the 60-minute hour and the first accurate calendar. Baghdad became the capital of the great Islamic empire in 762 AD. Ruled by the Abbasid Dynasty, the kingdom was built in a perfect circle on the Babylonian ruins. Jabir Ibn Haiyan, a doctor and alchemist in Iraq during the Middle Ages, is considered to be the founder of chemistry. It is also believed that Noah’s ark was built in Iraq and Iraq was also the home of the Garden of Eden.

The main ethnic groups in Iraq are Arabs, Kurds, Turkomans and Assyrians. The official language is Arabic and Kurdish however languages such as Assyrian, Armenian, Neo-Aramaic and Azeri are spoken by the minorities. The majority of the population is Shiite Muslim, followed by Sunnis and Christians.

Iraq was part of many empires over its long history, the most recent being the Ottoman Empire. All of this history has contributed to the culture of the country. At the end of World War I and the collapse of the empire, the British took over as part of the League of Nations mandate. It is most unfortunate that more care was not taken by the Europeans to draw the lines in the Middle East regarding ethnicity and religion. The result of which has been much the same as in Africa; way too much bloodshed! Iraq gained independence in 1932 and became the Kingdom of Iraq in 1933. A republic was established in 1958 following a coup d’état. It was 1979 when Iraq was controlled by Saddam Hussein, a member of the Ba’ath Party, who may be considered the most ruthless dictator of the century. Saddam was responsible for gassing his own people, during the Iran-Iraq war, invading Kuwait, which resulted in the Gulf war, and was later accused of having weapons of mass destruction. This accusation ended up being false, but it did end his brutal dictatorship shortly after the American and British invasion. The USA’s and Britain’s decision to invade Iraq and remove Saddam from power was not supported by much of the rest of the world. The result has been costly, not only for the US and Britain in lost lives and billions of dollars, but especially for the people of Iraq. Today Iraq is in civil war, a crossroads perhaps like it has never seen before. Much of the country’s infrastructure has been destroyed due to countless years of war.

Iraq has the second largest oil reserves, after Saudi Arabia. This makes Iraq a very desirable area. The Kurds who may be the ones that suffered the most from the brutality of the Saddam regime were given an autonomous area in Northern Iraq called Kurdistan, as part of the new Iraqi constitution in 2005. They control some oil, and have been responsible most recently for fighting the terrorist organization ISIS/ISIL, who has claimed a rather large chunk of the country as their Islamic State. It is the Kurds’ hope to become an independent state however, it is complicated, as they also occupy land in Iran, Syria and Turkey.

As we look into the cuisine of this country, one can only imagine the importance of a family meal in times of war and occupation. Many Iraqis have fled, yet many remain. Their cuisine has been influenced by all the empires that came before and yet has maintained some ancient recipes found in those first known cookbooks. The cuisine is a fusion of Middle Eastern cuisine and Persian cuisine.

So let’s enjoy an Iraqi meal: 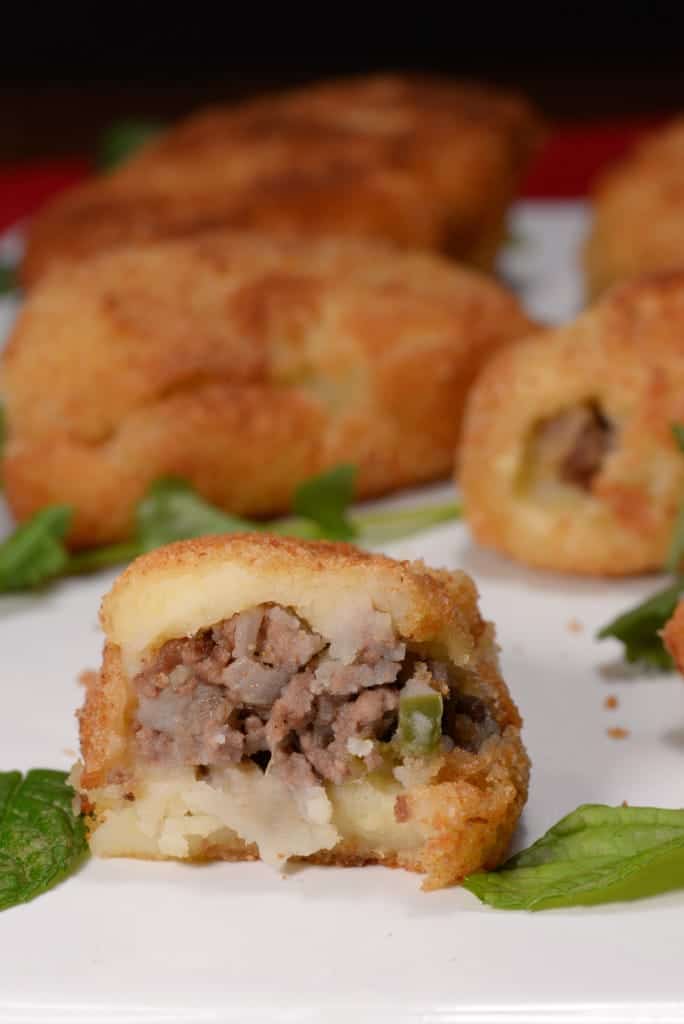 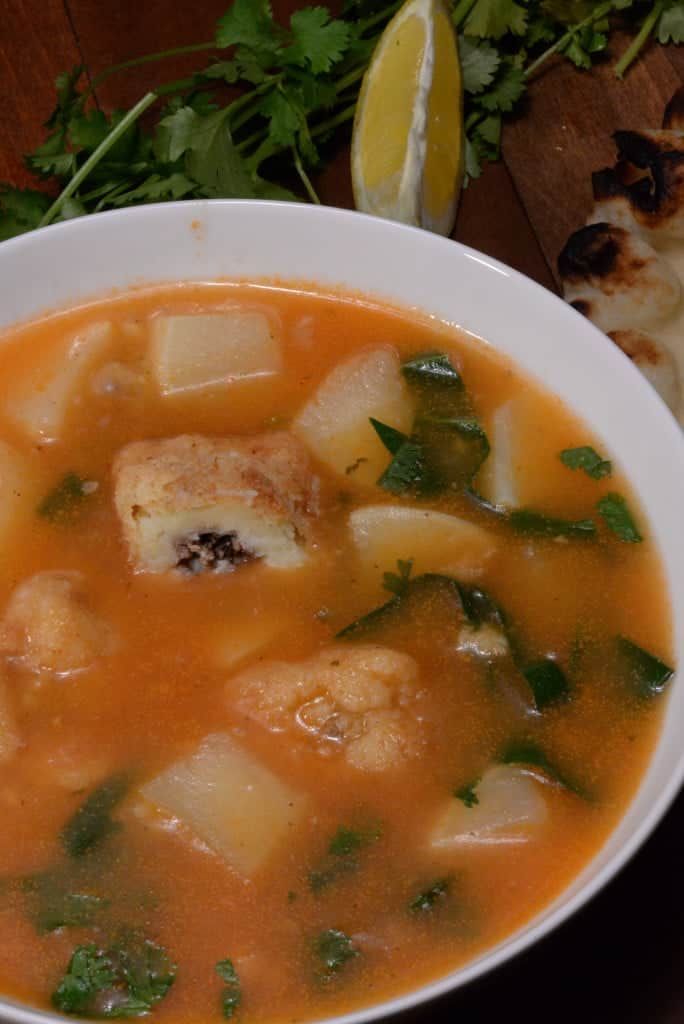 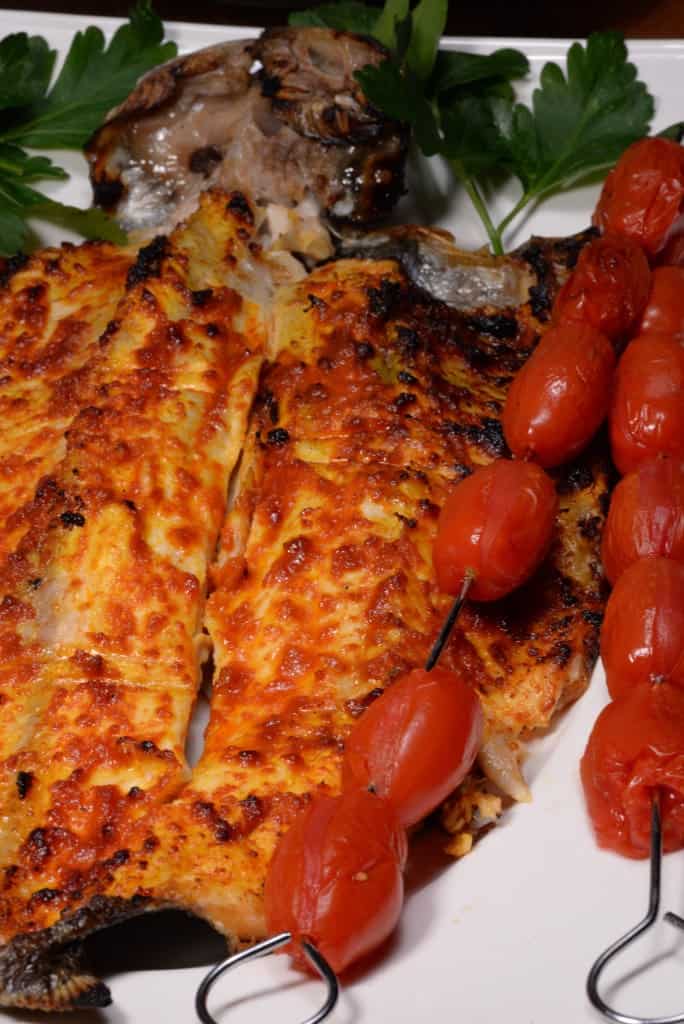 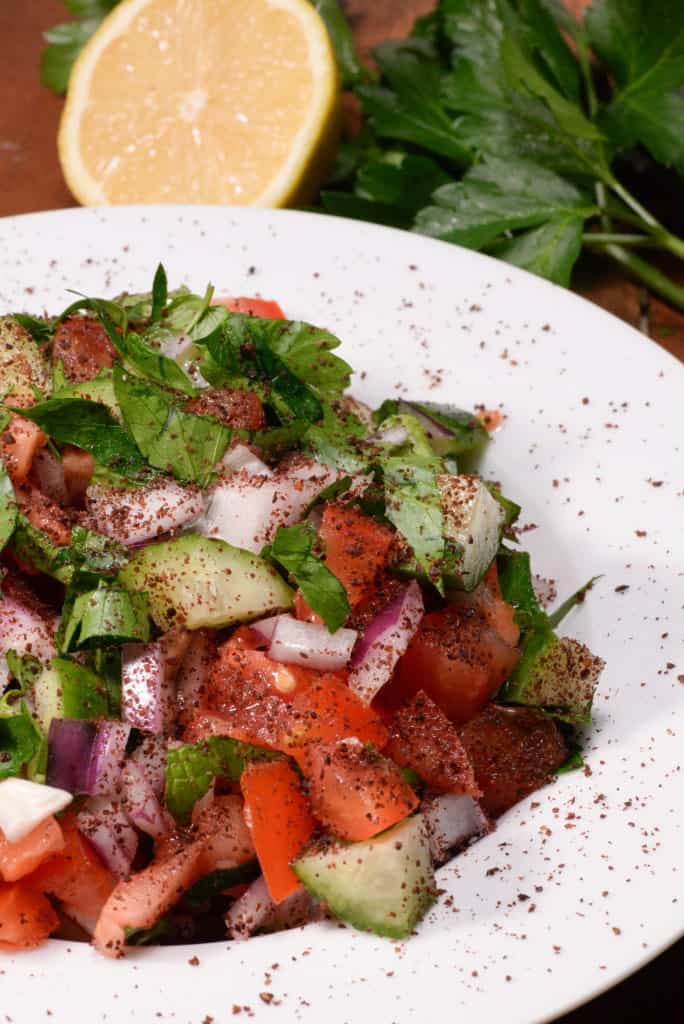 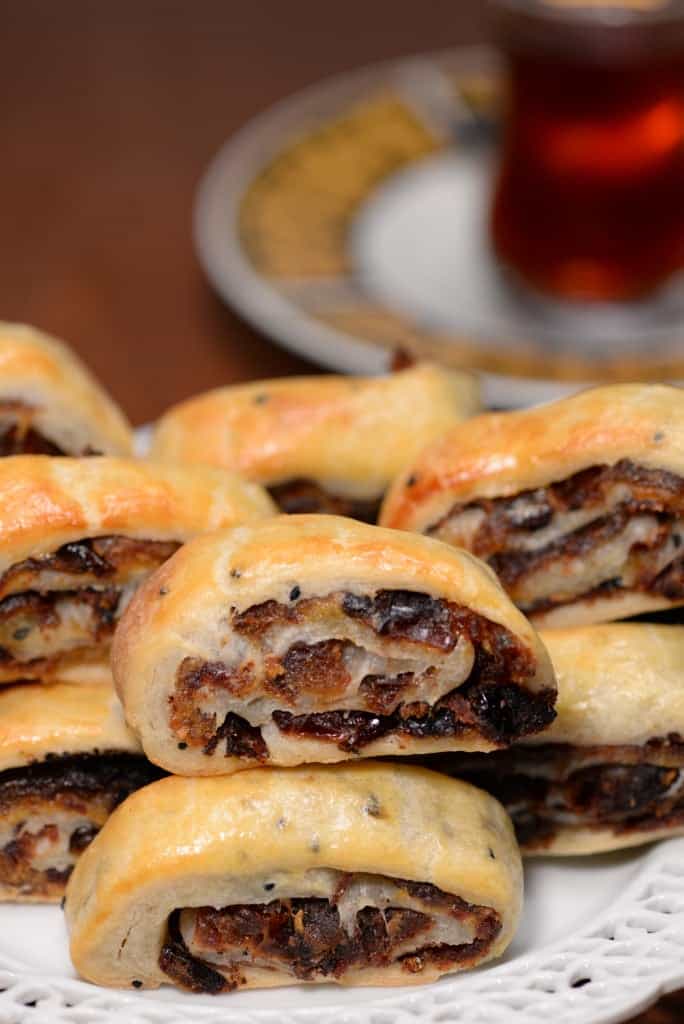 As we sit down to enjoy our Iraqi meal, we begin with “Bel Hana Wel Shefa” which means, “Bon Appétit” in Arabic. We decorated with roses, which are the national flower and dates, as Iraq is one of the top three date producers in the world. A lion represents their national animal and their coat of arms, a golden eagle, decorated the candle. In Iraq, many families have dining tables, however the floor is also used. If invited to an Iraqi home for a meal, you should arrive on time and bring a small gift of chocolates or sweets. You will enjoy your meal with members of the same sex, although women will be with the children of both sexes. If eating with utensils, eat continental style or if no utensils are offered, use only your right hand.

We begin the meal with the potato chap called kibbi. These are lovely little morsels that are made with mashed potato and filled with seasoned minced meat, either beef or lamb. They are then dipped in bread crumbs and fried; a meat and potato lover’s dream! This recipe can also be made for a main course as a casserole that is baked instead of fried, for a healthier version. We loved the fried kibbi to begin our Iraqi meal.

A few of these treats were kept aside for use in the next course which was a turnip soup. I don’t think I have ever knowingly eaten a turnip before. It is much like a potato with a kick of a horseradish flavor. Many recipes call for a kibbe or kibbi, made from semolina and rice. However, the ones we made with potato worked out perfectly and were a great addition to the soup course. The soup is very tangy thanks to the lemon. Soups and stews of all types are loved throughout the country and considered comfort foods.

For the main course we enjoyed the national dish, called Masgouf. It is a whole, grilled fish that typically would be carp or bream in Iraq. I used trout as a substitute and it was fantastic. The rivers there provide the fish used for this lovely meal. The recipe is so simple, yet so flavorful; just a marinade of turmeric, tomato and salt.

The main course was served with a typical Arabic salad, consisting of tomatoes, cucumber and red onion with parsley and mint. However sumac is added to make this a little different. Sumac is indigenous to the Middle East and different from the berry you may find in your backyard in North America. Some types are poisonous, so obviously use caution and buy from a reputable source. This little, dark reddish/purple berry is dried and ground. The flavor provides a lemony tang to meats, vegetables and to this wonderful salad. Its deep color also provides a beautiful garnish. Aside from its unique flavor, it is very healthful; as an antioxidant, as a “bad” cholesterol fighter, as a “good” cholesterol enhancer and is also known for lowering glucose levels.

For dessert we had the national cookie, called Kleicha. These cookies/pastries were served with a cup of hot, black tea (chai) and wow, what an ending to our Iraqi meal. These delicious treats are sort of like a buttery, puff pastry, stuffed with a sweet date filling and lightly seasoned with cardamom and fennel seeds. They reminded me of the Armenian dessert called nazook, which was certainly one of my all-time favorites. Needless to say, these were winners!

As we end our Iraqi meal we say, “Aa Kaina Jayedan” which means “We ate well!”

We hope that somehow Iraq can be freed from the radical Islamic group (ISIS) causing death and destruction, that the civil war will end, and a unified people can call Iraq home again and finally live in peace.