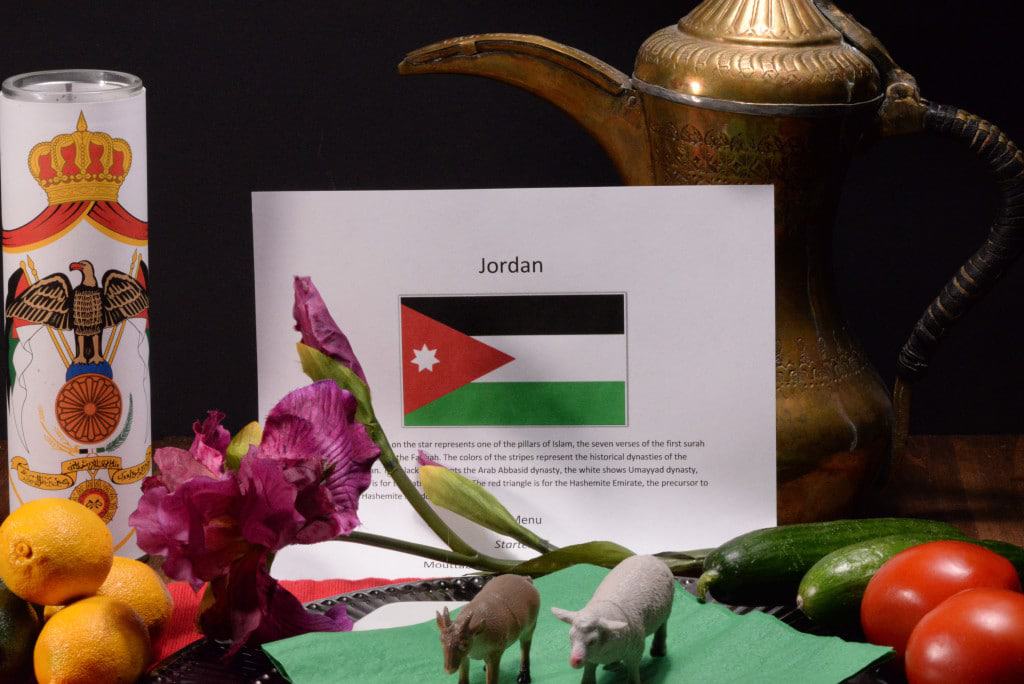 Jordan is officially known as “The Hashemite Kingdom of Jordan.” Hashemite is a member of an Arab princely family claiming descent from Hashim, the great-grandfather of Muhammad. Yarden is the Hebrew name of the river that flows between the countries of Jordan and Israel. The name stems from the root word “yarad”, which means “to descend” or “flow down.” Known today as the Jordan River, it is a significant, fresh water source for the people of Jordan. The river also has major significance in Judaism, Christianity and Islam. This is the site where the Israelites crossed into the Promised Land and where Jesus of Nazareth was baptized by his cousin, John the Baptist. The name Jordan was adopted as a common name in Europe when crusaders returned with water from the river to baptize their own children.

Jordan is located in the Middle East, in western Asia, on the east bank of the river Jordan. Jordan is bordered by Saudi Arabia to the east and south, Iraq to the northeast, Syria to the north and Israel and Palestine to the west. Jordan’s location, at the crossroads of the Middle East, has been an important location since the dawn of civilization, connecting Asia, Africa and Europe. Today Jordan is considered the safest Arab country. However, it is right in the crosshairs of surrounding turmoil and has been extremely gracious in accepting refugees from conflicts dating back to 1948. Many Palestinians and Syrians now reside in Jordan. Jordan is the only country where a Palestinian can become a citizen.

Jordan was part of many kingdoms throughout history, including the Ottoman Empire, from 1516 until 1918. It was previously known as Transjordan. The Turkish rule came to an end during World War I when the Hashemite Army, in alliance with the British, took over and secured present day Jordan. Jordan became independent from Britain on May 26, 1946 and is run as a constitutional monarchy today. King Abdullah II is the current King who succeeded his father King Hussein after his death. King Abdullah II reaffirmed Jordan’s commitment to the peace treaty with Israel and its relations with the United States (US). Jordan is a key ally of the US and United Kingdom and together with Egypt, is one of only two Arab nations to have signed peace treaties with Israel. King Hussein was loved in the country and was distinguished by marrying an American woman who became known as Queen Noor or Noor Al-Hussein, which means “Light of Hussein.” She is credited for her work with refugees, as an advisor to Trust Women, (an organization aiming to put the rule of law behind woman’s rights) and as an advocate to ban landmines and eliminate nuclear weapons. Although she is no longer the sitting queen, she remains in Jordan to continue her work.

The country of Jordan is ethnically made up of 98 percent Arabs. Arabic is the official language and English is widely understood and spoken among the upper and middle classes. The majority of the population is Sunni Muslim, with a very small number of Christians, mainly Greek Orthodox. Jordan’s economy is among the smallest in the Middle East. Jordan does not have the natural resources on which many of her neighbors rely. King Abdullah has tried to implement economic reforms such as opening up foreign trade and privatizing state owned companies but it is tourism that is most lucrative. However, tourism has been hurt recently by the surrounding areas of conflict. Additionally, the large influx of refugees has caused massive unemployment and strains on their government. Their main industries, aside from tourism, are information technology, clothing, fertilizers, potash and pharmaceuticals. Their main crops are citrus, tomatoes, cucumbers, olives, strawberries. They also raise sheep and cows and dairy products are widespread.

The capital city, Amman, is unique, in that it was originally constructed across seven hills, known as “jabals.” The city today spans over nineteen hills and directions are given based on “jabals.” It is the most populated city in Jordan, home to more than four million. Many of the buildings there look alike, as they are made from the same light-colored limestone.

Their main tourist site is the city of Petra, which is a UNESCO site and listed as one of the seven new wonders of the world. Also known as the “Rose City” for the color of the stone from which it was carved, it dates back some 2000 years. (It was featured in the Indiana Jones film, “The Last Crusade.”) The city, which has to be entered through a gorge only about a mile wide, is stunning with its rock cut architecture and water conduit system. Other historical sites in Jordan include Mount Nebo, which it is believed to be the burial site of Moses, Madaba which dates back at least 3500 years and is mentioned in the Old Testament numerous times and Pella. Madaba it is most famous for its intricate fifth and sixth century mosaics, prolifically laid throughout the town. Pella is a sleepy, small rural village, where there is evidence of humans dating as far back as the Paleolithic era, some 100,000 years ago. However, one of the most popular tourist destinations and also the lowest place on earth, is the Dead Sea. It is well known for its spiritual and healing spas.

The most notable aspect of Jordan, has to be the hospitality of the Jordanian people. They are known to be decent, honest, respectful and courteous. Generally speaking Jordan is a liberal society. They will smile and say “Welcome to Jordan.” The only thing they ask is in return is that foreign tourists make an attempt to honor their culture. When visiting there you should dress modestly and not show any public displays of affection to the opposite sex. It is very likely that you will be asked to drink some tea, or even be invited for a full meal at someone’s home. They will have a sincere interest in getting to know you. If for any reason you choose not to accept the invitation, you should say “Shukran shukran” (Thank you, thank you) and then you follow it up with, “Marra okhra insha’Allah (Another time, if God wills it”), which softens the no, yet indicates you won’t forget their kind offer. Also, never photograph a woman without permission, it is considered highly offensive.

As we look into the cuisine of the Jordanian people, it is mainly Middle Eastern, Arab and Greek, with some Turkish influences as well. Dishes include meze (small starter dishes) such as hummus, tabbouleh, and mouttabal. Kebabs are found all over and usually made with lamb. Rice is served at most meals along with an array of dried fruits and fresh vegetables. Grains, cheese and yogurts are also important ingredients in their cooking. Sweets, such as Baklava, are widely loved and sesame seeds, thyme, sage and mint are all quintessential flavors of Jordan.

So let’s eat a Jordanian feast: 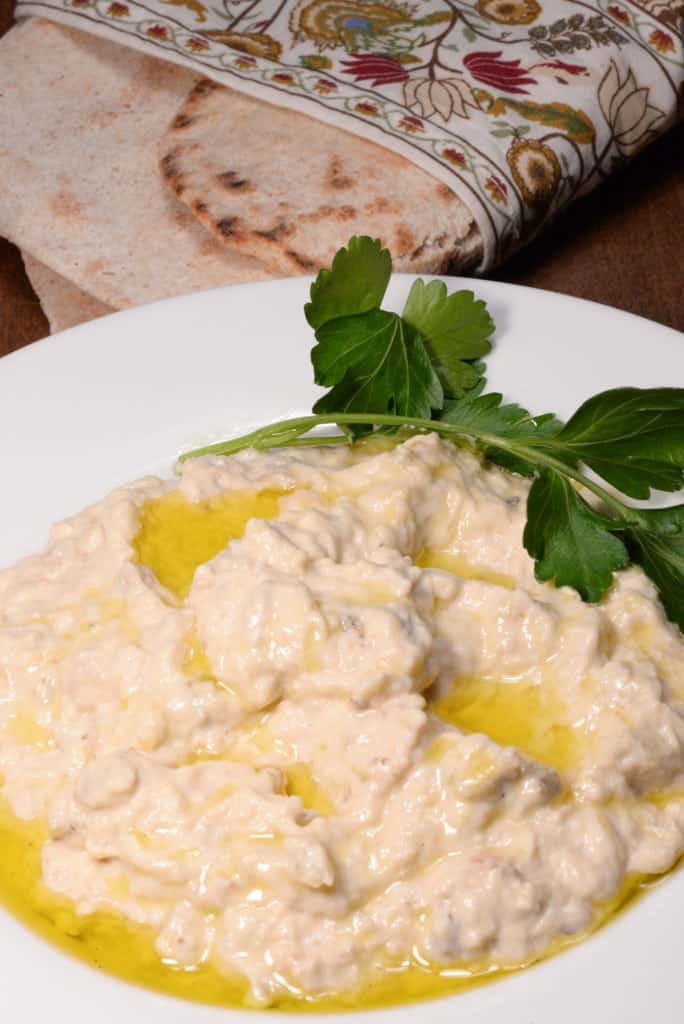 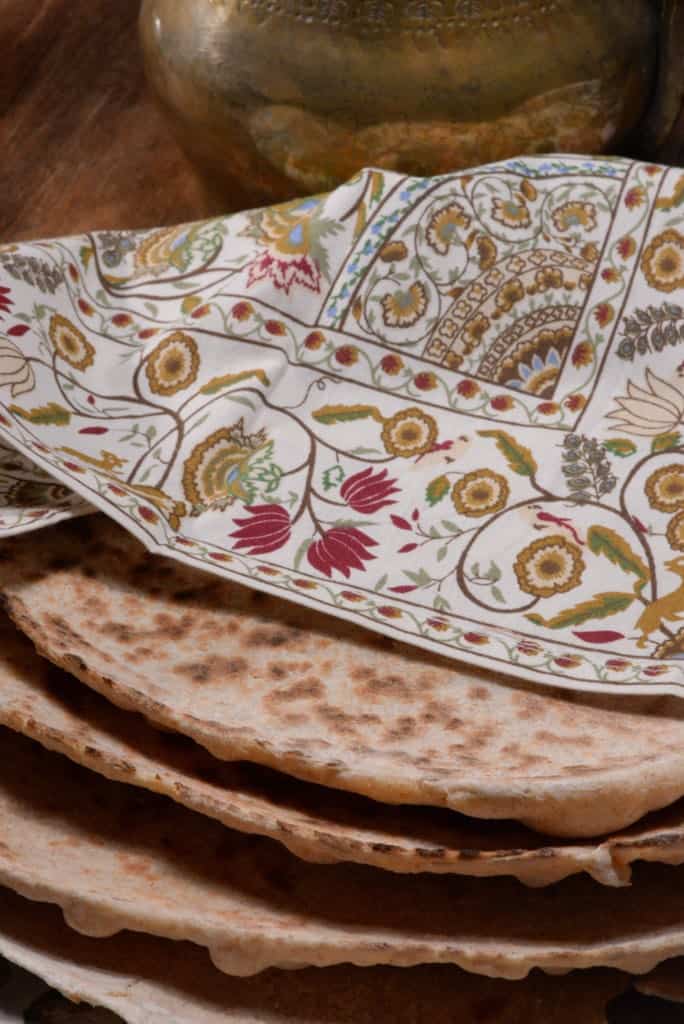 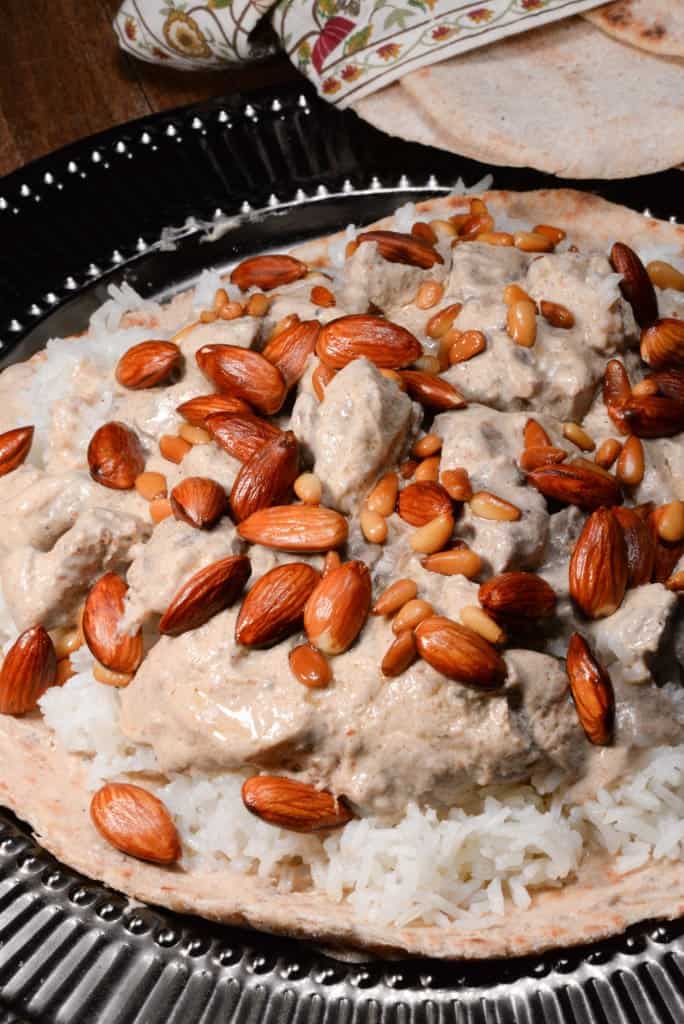 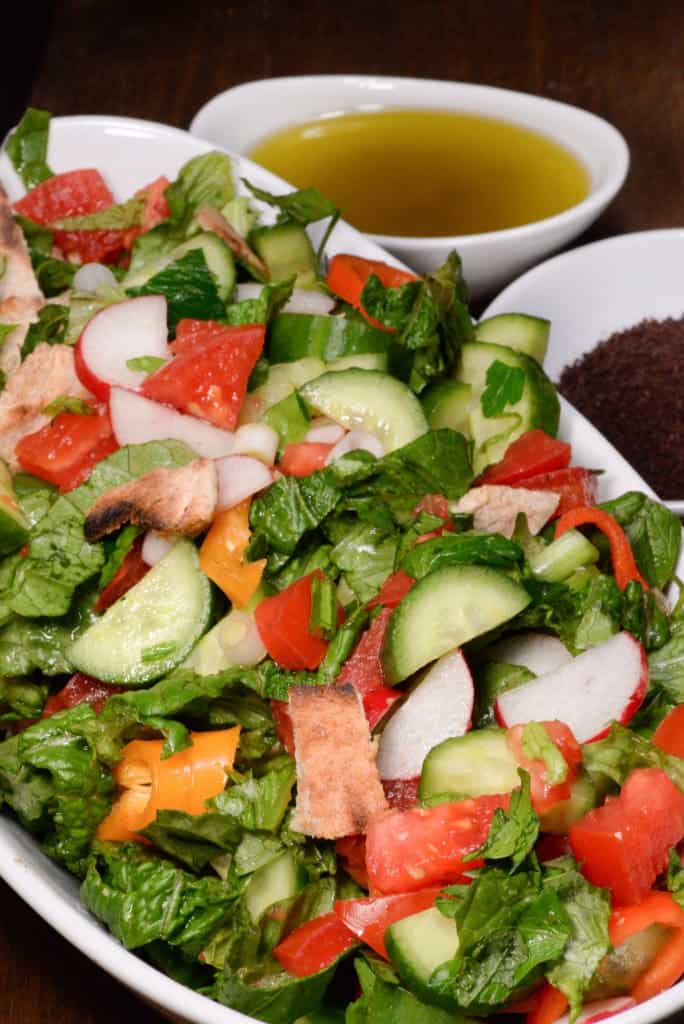 Dessert
Kunafa (A sweet pastry with a cheese filling) 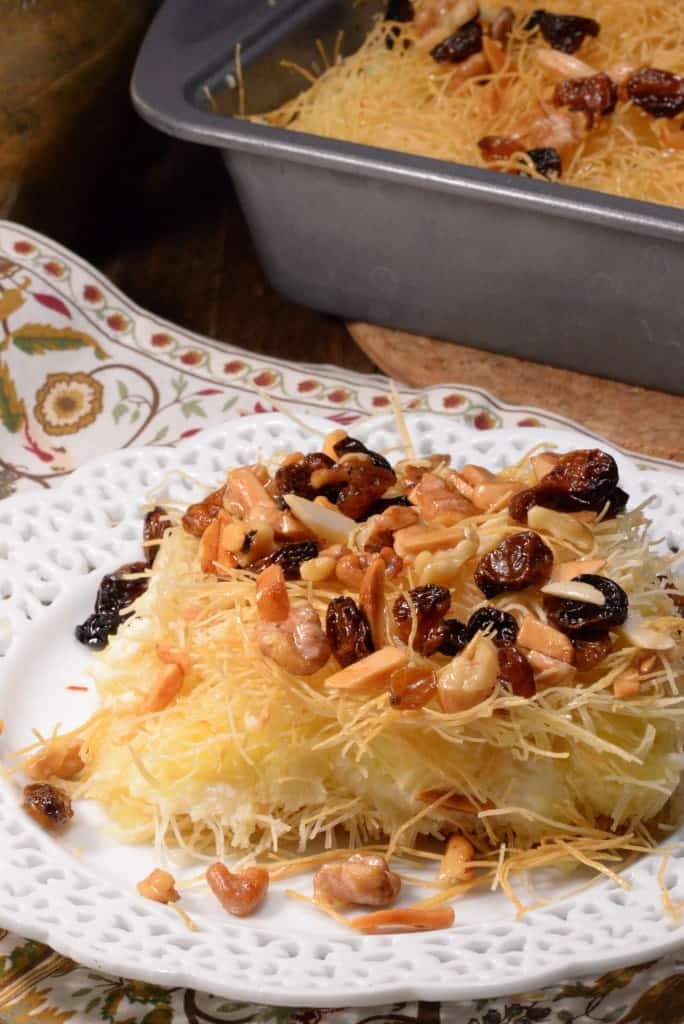 We decorated with the colors of the Jordanian flag; black, white, green and red. The colors represent the historical dynasties. We also used the black iris, which is the national flower along with citrus fruits, tomatoes and cucumbers. A sheep and a goat represented the nomadic lifestyle of the Bedouins, who are considered to be native Jordanians.

We began with a thimble of bitter, Arabic coffee, which is a welcoming gesture in Jordan. We downed it and then shook the cup back and forth indicating we don’t want anymore. If you were to hold the cup out straight, that indicates you want a refill.

We brought out the food and said “Sahtayn” (May you eat.) We began with the Jordanian flat bread, called shrak that was used to enjoy the dip, called mouttabal. (Of course we only used the right hand to eat.) The dip is very similar to baba ganoush which we made for Bahrain, except it has a beautiful smoky flavor due to the way the eggplant is cooked.

For the main course, we enjoyed the unique dish called mansaf, which also happens to be the national dish of Jordan. Mansaf is lamb, mixed with aromatic herbs and spices then cooked in yoghurt and served with lots of rice. The lamb is cooked in jameed (an Arabic word for dried yoghurt). The jameed is made from goat’s milk then mixed with water to produce a creamy sauce. The lamb is stewed in this sauce until perfectly tender. A large tray is first covered with the doughy, flat bread, (shrak) then dampened with yoghurt. On top of this, a layer of rice is heaped. The meat is then piled over the rice and covered with the sauce. (Pine nuts and almonds are used for garnish.) This dish is served for every special occasion and we can see why; it is truly a feast. The jameed adds both a salty and sour taste to the dish that is most distinctive. Jordanian etiquette dictates that one should only eat the portion of food on the platter that is directly in front of them. Often the host will add special pieces of meat to your section for added enjoyment.

We served the mansaf with a side salad, called fattoush. This is your basic Arabic vegetable salad with the addition of toasted shrak which absorbs the dressing perfectly, like a crouton. We loved the simple lemon and olive oil dressing with just a touch of salt and pepper. It was garnished with sumac, which is quite popular in that region.

For dessert, we had an interesting sweet pastry, made with very fine strands of dough called kataifi. This dough is lightly coated with ghee and when baked makes for a lovely, crunchy pastry. The kunafa has a delicious cheese filling tucked in-between the layers of the pastry. The whole thing is coated with a sweet syrup, lightly flavored with citrus and rose water. The kunafa was garnished with dried fruit and nuts; a superb ending to our Jordanian feast.

We finished our meal and placed our right hand over our heart and said, “Al-Hamdulillah” which means (Thank God), which expressed our enormous appreciation for this lovely feast.