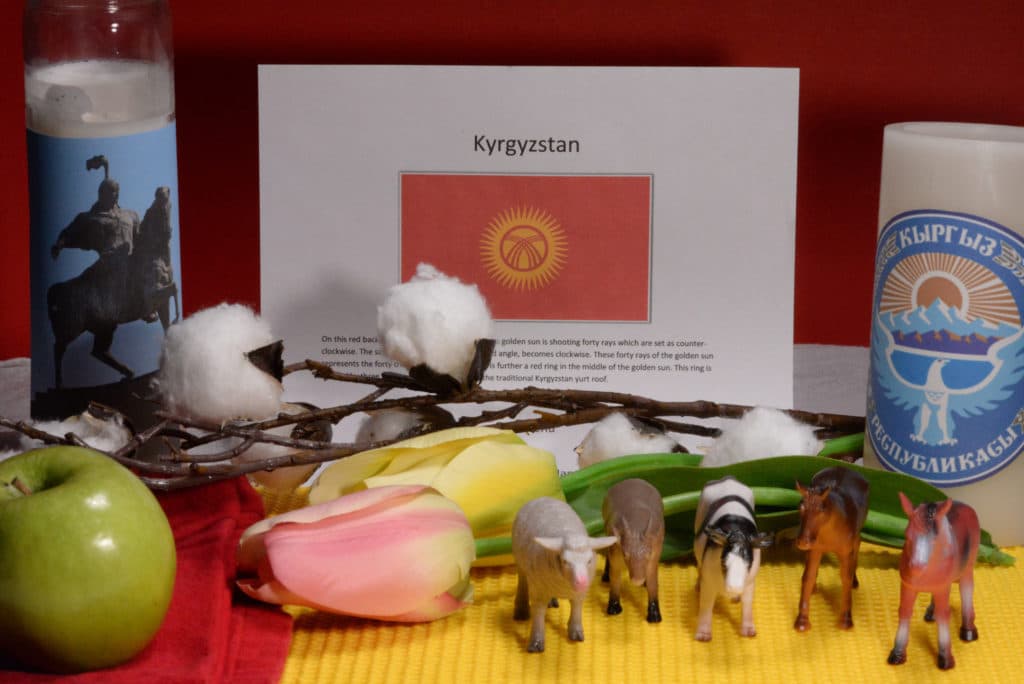 The name Kyrgyz (pronounced KIR-ghiz) is derived from a Turkic word meaning “Forty”, in reference to the forty clans of Manas; a legendary hero who united the clans against the Uyghurs.  Kyrgyz literally means, “We are forty.”  The Uyghurs dominated much of central Asia in the early ninth century.   Although each tribe was separate, they were closely affiliated and considered to be part of greater family.

Kyrgyzstan is a beautiful, mountainous, landlocked country, located in central Asia.  She is bordered by Kazakhstan to the north, Uzbekistan to the west, Tajikistan to the southwest and China to the east.  Much of Kyrgyzstan’s rich, 2000 year history has been preserved, mainly because of its high mountainous terrain.  In fact, 80 percent of the country is mountainous and is often referred to as, “The Switzerland of central Asia.” It is replete with snowy peaks and pristine lakes.  It has historically been at the crossroads of great civilizations and commercial routes, notably the Silk Road.

Kyrgyzstan was ceded to Russia through two treaties between China and Russia, back in 1876.  They gained independence in 1991, after the breakup of the Soviet Union.  The country has seen many uprisings and had much turmoil due to border disputes and ethnic tensions.  Kyrgyzstan has officially been a unitary, parliamentary republic but it remains conflicted today with revolts, economic troubles and political conflicts.

Ethnic Kyrgyz make up the majority of the population (5.7 million), with Uzbeks and Russians as large minorities.  The official language is Kyrgyz, although Russian is also widely spoken.  The main religion in Kyrgyzstan is Muslim, along with Russian Orthodox.  The largest city, is also the capital city, called “Bishkek” in the north.  The second largest city lies on the border with Uzbekistan; the ancient town of Osh.

Kyrgyzstan was the second poorest country in the former Soviet Union and remains the second poorest in central Asia today.  Over 30 percent of the population lives below the poverty line. The economy was significantly affected by the breakup of the Soviet Union and today struggles to become a market based system.  Although rich in gold and other mineral resources, they have yet to attract foreign investment or tourism, due to the political instability of the country.  Agriculture is an important sector of the economy, including the raising of livestock.  Wool, meat and dairy products are the major commodities.  Their crops include wheat, beets, potatoes, cotton, tobacco and some fruits and vegetables.

Like its neighbor Kazakhstan, many people live rurally and semi-nomadically.  Most are self-sufficient with respect to food production for their families.  Some still live in round, tent-like structures called yurts, tending to their sheep, horses and yak.  Koumys or fermented mare’s milk is a specialty in the countryside and considered to be the national drink.

Horses are very important to the Kyrgyzstani people, holding true to ancient traditions.  The horse was believed to carry the spirit of the deceased into a higher world.  They also are master horseman, as equestrian sports are extremely popular.  Racing and wrestling on horseback are especially well-liked.  A game played called Ulak Tartysh or kok boru, is common.  This is where they wrestle on horseback for a goat’s carcass.  These games stem from their ancient tradition, where the kok boru (the gray wolf), would attack the herds of cattle grazing in the steppes.  The shepherds would chase after the wolf.  Once caught and killed, they would try to snatch the carcass away from each other for fun.  Falconry, while on horseback, is yet another skill that has been practiced in the Kyrgyz culture for centuries.  In addition to falcons, golden eagles are also trained for the sport.

Another tradition, to keep the folklore alive, is the telling of epic tales, some that date back 1000 years.  The most famous epic tale, tells the saga of Manas, the father and hero of the Kyrgyz people.  The entire poem is incredibly long.  It takes up to three weeks to recite it and was not written down until the 1920s.  A special performer, called a Manaschi, performs the famous saga of Manas, and is held in the highest regard.

As we look into the cuisine of Kyrgyzstan, it is almost indistinguishable from its neighbor, Kazakhstan.  They both share Beshbarmak as the national dish, with the same tradition of eating it with pieces of the meat, passed out based on their social position.  The cuisine is meat based, with simple cooking techniques, such as letting the flavors of the meat and vegetables blend together. (Yes, they also eat horse meat in Kyrgyzstan.)  Shorpo, a soup dish, along with plov (rice with meat carrots, garlic and onions), are also very popular mainstays.  Giant, steamed pasta dumplings called manty, filled with onions and mutton, are also loved.  Boorsuk, the conventional bread, served with green or black, (chai) tea and dairy products, are often served before the main meal.

So let’s eat a Kyrgyzstan meal: 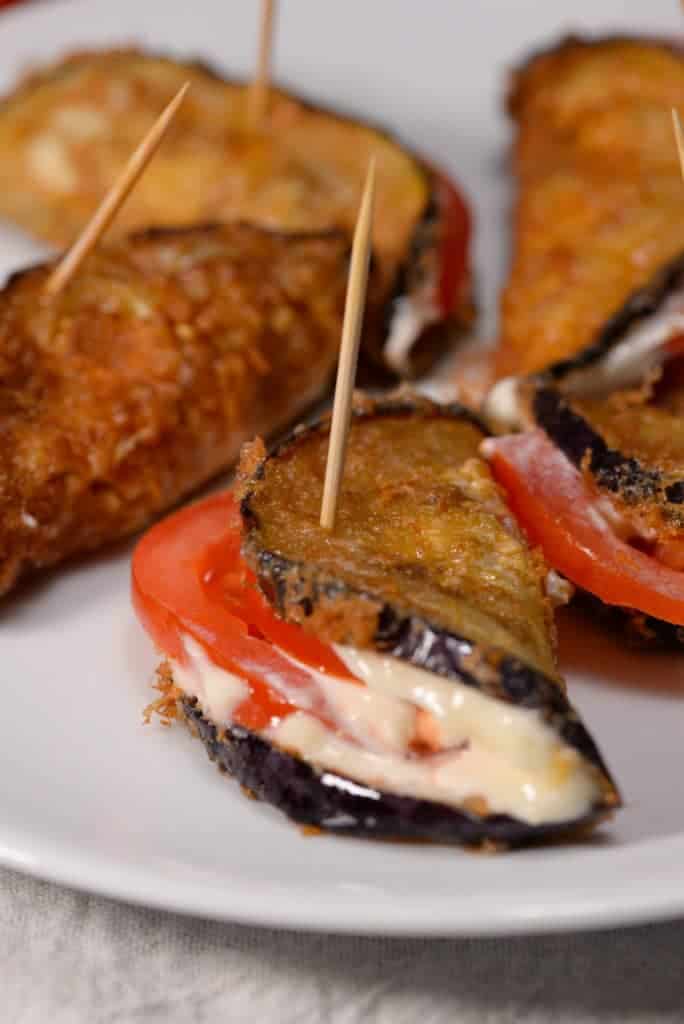 Laghman (A one pot meal of noodles, meat and vegetables) 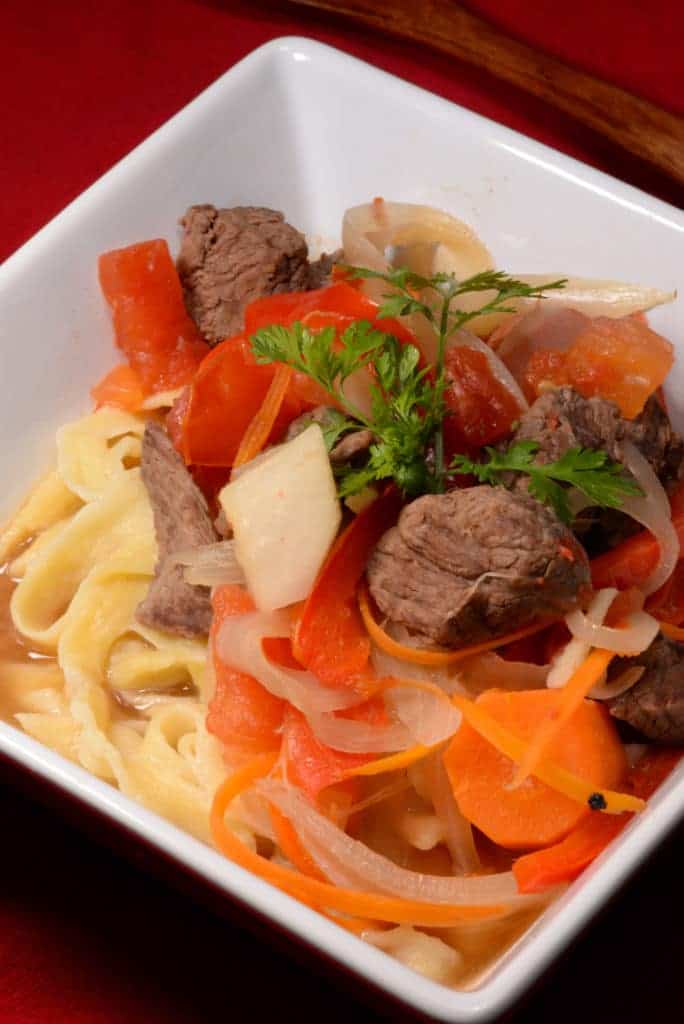 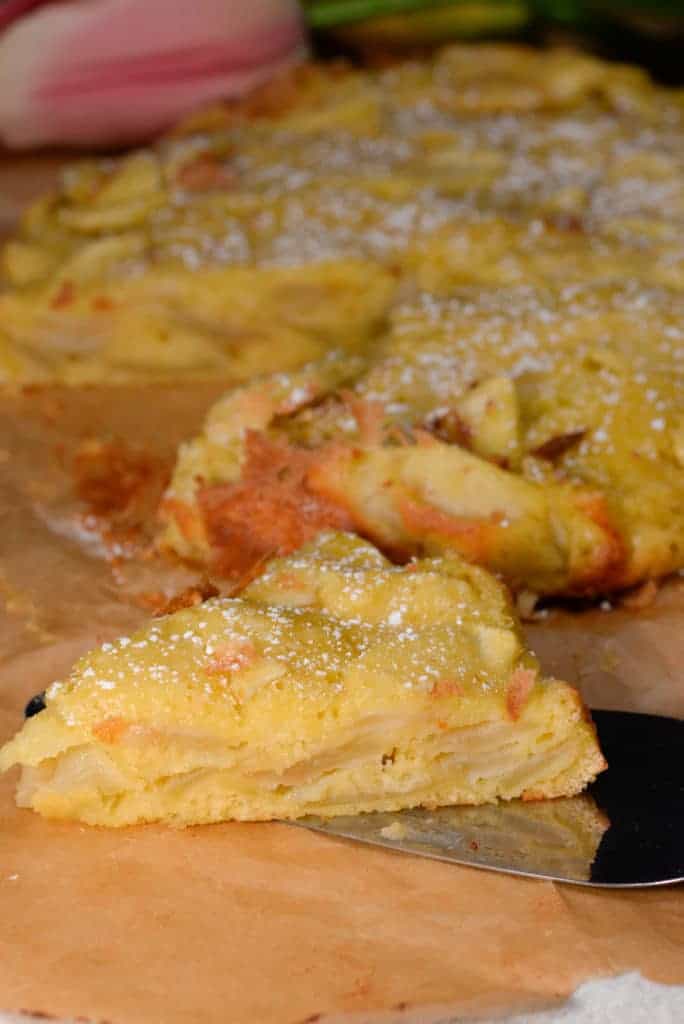 We set a white cloth, called a dostokhwon, over the table and decorated it with tulips, (the national flower), as well as cotton and livestock, to represent their economy.  An apple completed the setting, representing the region where they originated. (Apples are believed to have originated in the area of central Asia.)

We began with a toast of vodka; a clear Russian influence.  We said, “Den soolugubuz uchun”, which means “cheers”, in Kyrgyz.  Our first course was a simple eggplant salad that was more like an appetizer than a salad.  The eggplant was fried in slices and then paired with tomatoes and a topped with a garlic flavored mayonnaise.  They were secured, like little finger sandwiches, with toothpicks, which made them easy to pick up and eat (with only your right hand, which is customary there.)  They were yummy, little bites.

Our main course was as much fun to make as it was to eat.  Laghman is a dish of handmade, pulled noodles that originated from their neighbor, China.  The delicious, long noodles are served in a broth, with tender pieces of lamb or beef, along with root vegetables.  There is very little seasoning used and the end result is simply delicious by letting the flavors of the ingredients permeate the dish.  I really had a great time pulling the noodles.  There is just something so rewarding when the dough turns out perfectly.  I had never before attempted this but now, I will make this dish often.  Homemade noodles are incredible!

For dessert, we had a very simple, apple cake, made with just a few ingredients.  We enjoyed it with chai, for a lovely ending to our Kyrgyzstan meal.

When we finished our meal, we declared a loud, “Omin”, (Thanksgiving to God.)

I leave you with a few Kyrgyz proverbs:

“The earth is a small place for fugitives.”

“If your right hand is angry, hold it back with your left.”

Korushkoncho (See you later in Kyrgyz.)

P.S. Have you ever attempted homemade noodles?