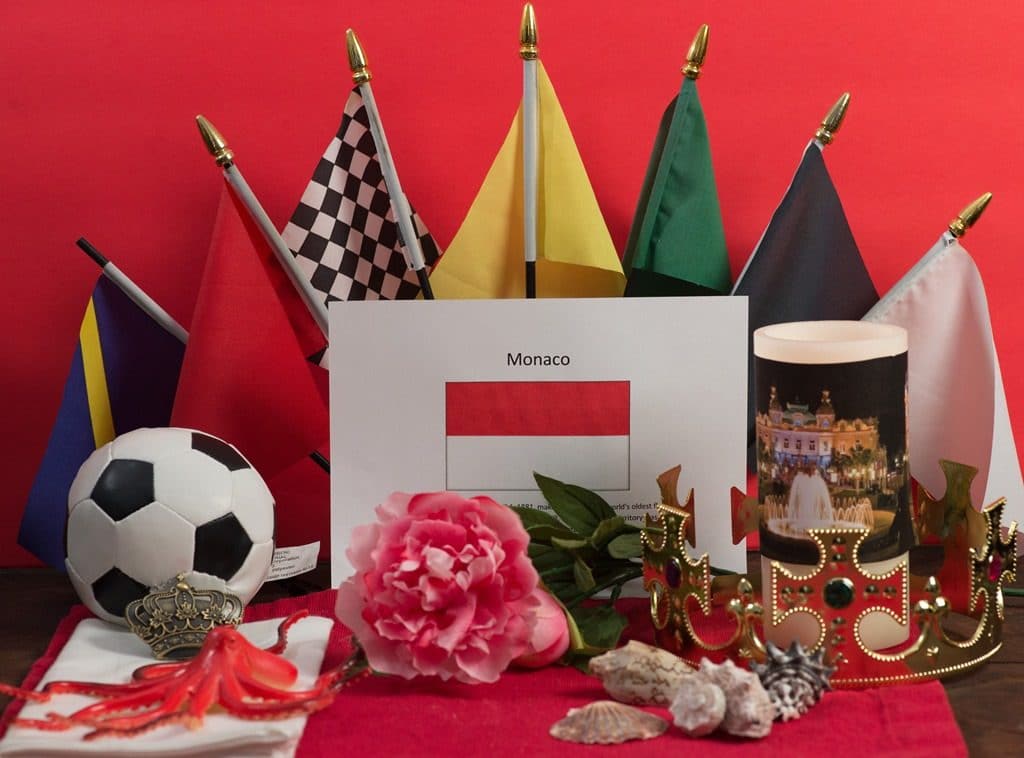 The name Monaco comes from the Phocaean Greek colony, back in the sixth century B.C.  The Ligurians called it Monoikos which means “single house.”  It may stem from an ancient Greek myth, whereby Hercules passed through the area and turned the other gods away.  As a result, the temple of Hercules was constructed there.  Because it was the only temple in the land, the city was called Monoikos.

Monaco today is the most densely populated principality in the world, with about 19,000 people per kilometer.   Monaco is the second smallest country in the world, (Vatican City is the smallest.)  It is so small you can walk across the entire country in less than one hour.  Its total area is just a bit over one square mile.   It is surrounded on three sides by France, Italy is just a few kilometers away and on its southern border is the stunningly beautiful, Mediterranean Sea.  Just the name, Monaco, conjures up the images of royalty, a place for the rich and famous, yacht lined harbors and fast sport cars.

Monaco has the oldest ruling family in Europe.  It has been ruled by the Grimaldi family since gaining independence from the Republic of Genoa, in 1297.  It is run as a constitutional monarchy.  As recently as 2002, a treaty was signed with France allowing Monaco to remain an independent nation, even if the family stops producing heirs.

During a difficult monetary time in Monaco’s past, Princess Caroline established gambling casinos to prevent the ruling family from falling into bankruptcy.  The famous Casino de Monte-Carlo was opened in 1863.  The revenue from the casino brought in so much money that they quit charging their citizens income tax in 1869.  The casino has been featured in three James Bond films.  Interestingly, the citizens of Monaco are not allowed to gamble or visit the casino.  The government put the law in place so they do not gamble away their riches.  Monaco today remains a tax haven.  It is true there is no income tax but there is a nearly 20 percent value added tax on goods and services.  Corporations pay about 1/3 of their profits in tax.  The country still generates plenty of revenue from the casino as well as tourism, banking and financial industries.  Hollywood also has a love affair with Monaco, as over 50 films have been based there.  Film, radio and television are also important revenue generators for the country.

Monaco gets the prize for the most police per capita, which explains the very low crime rate. They also have the highest life expectancy in the world, at 90 years of age.  Not surprisingly, it has the most millionaires and billionaires per capita, as well.  Monaco really doesn’t have much in the way of natural resources, other than its oceans, but Monaco’s GDP is a staggering $153,115, one of the highest in world.

The population of Monaco is just over 38,000, however only about one-fifth of the population are natives.  The largest ethnicity is French, followed by Italians and a mix of others after that.  The natives are called Monegasque and the other residents are called Monacoian.  One problem they have stems from a growing population and limited space, so they have actually grown Monaco some 20 percent by reclaiming land from the sea.  There is no unemployment in Monaco, in fact during the busy season, they bring in workers from nearby France and Italy to accommodate the crowds.  Societe des Badins de Mer (SBM) is the country’s biggest employer.  It runs the majority of Monaco’s tourism activities.

The official language is French, but Italian, English and Monegasque are also spoken.  The sole currency is the euro, due to its relationship with France.  Although Monaco is not formally part of the European Union, it does participate in some of the policies.  France is also responsible for Monaco’s military defense.

Monaco was really put into the world spotlight when the American actress, Grace Kelly, married Prince Rainier, in 1956.  It is estimated that 30 million watched the occasion on television.  The actress met the Prince at a photo shoot, during the 1955 Cannes Film Festival.  Despite marrying a prince, in keeping with tradition, Kelly’s family had to pay the royal family a two million dollar dowry.  The couple had three children, two girls and one boy and the boy is now the current ruler of the land.  When Prince Albert II was born, the country celebrated with a 21 gun salute and the day after was declared a national holiday.  Everyone was treated to free champagne, which is the national drink of Monaco.

Monaco is well known for the most prestigious Formula One race, with its narrow streets, tight corners, elevation changes and the famous tunnel.  The Monaco Grand Prix is one of the oldest in the circuit, holding races since 1929.  The famous Brazilian racer, Ayrton Senna, won six times in his short career (more than any other driver in history.)  Whenever the Grand Prix is in town, the Hotel de Paris sells close to 2000 bottles of champagne.  The hotel’s wine cellar, dating back to 1874, is one of the most legendary cellars in the world, with over 450,000 bottles and 55 different types of bubbly.

Although you might think that Monaco is set up for jet setters, the truth is, they don’t even have an airport, only heliports. The closest airport is in Nice, France.  You can, of course, also get there by car, rail or yacht.  Each year, in September, they host the Monaco Yacht Show, where companies exhibit the best of the best of the super yachts.   Last year, the average length of these super yachts was 154 feet.

The Musee Oceanographique is one of the largest and most prestigious oceanographic museums in the world.  Its aquarium contains nearly 6000 specimens.  Aside from what the museum holds, the building itself is a masterpiece and one of the main focal points of Monaco. It is perched on the side of the cliffs of the Rock of Monaco and rises up from the sea, 85 meters high.  The architecture was inspired by the marine world.  It is a “must-see” tourist attraction while in Monaco.  Of course, you will also want to visit the Prince’s Palace.  The original fortress was built in 1215 and throughout the centuries it has been transformed into one of the most luxurious residences in the world, in the Louis XIV style.  The palace has galleries, an impressive car collection and everything else you might imagine a house of royalty would have.

As we look into the cuisine of this tiny nation, the heavy influences are clearly French and Italian.  Generally speaking, it is a Mediterranean diet consisting mainly of seafood, fresh vegetables and olive oil, as the most common ingredients.  Despite their small size, there are a few dishes that are considered to be Monegasque.  It is a toss-up for the national dish, between  a  street food called socca, which is a chickpea crepe, and barbagiuans, which are deep fried savory pastries, stuffed with chard, spinach, ricotta, onion and sometimes pumpkin.  The word barbagiuan means “Uncle John” and is always eaten on November 19, Monaco’s National Day.   Stocafi also pops up as a national dish and is a dish made with cod, as the main ingredient; simmered in a spicy tomato and herb sauce.  There is also a drink called a “Monaco,” which is a beer with seven-up and a splash of grenadine poured over ice;  a sweet refreshing drink on a warm summer day.

So let’s enjoy a Monegasque Meal 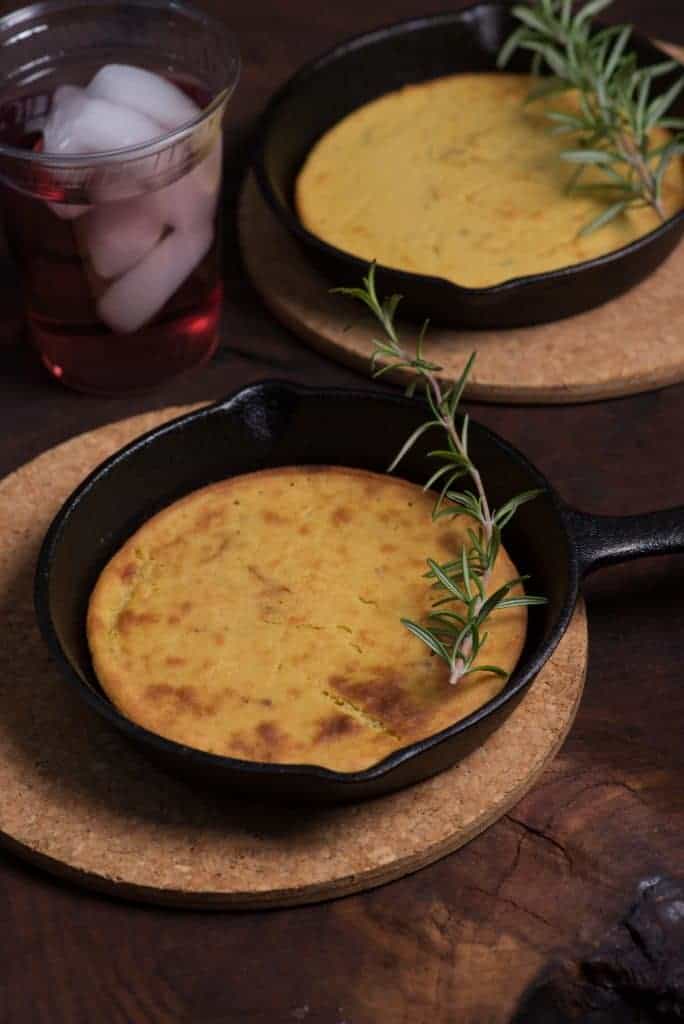 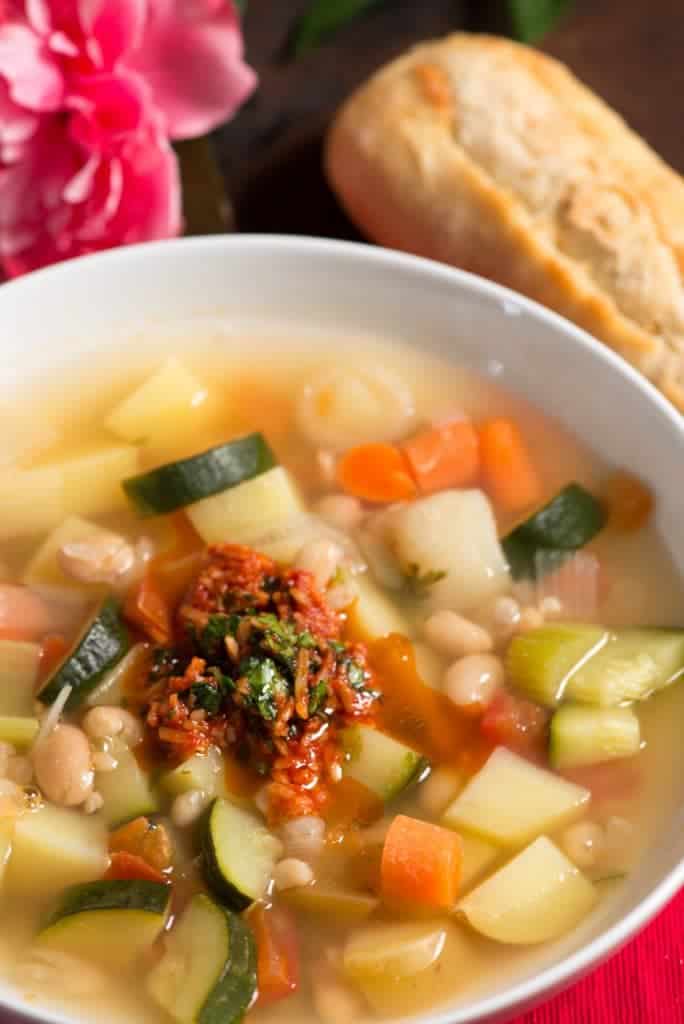 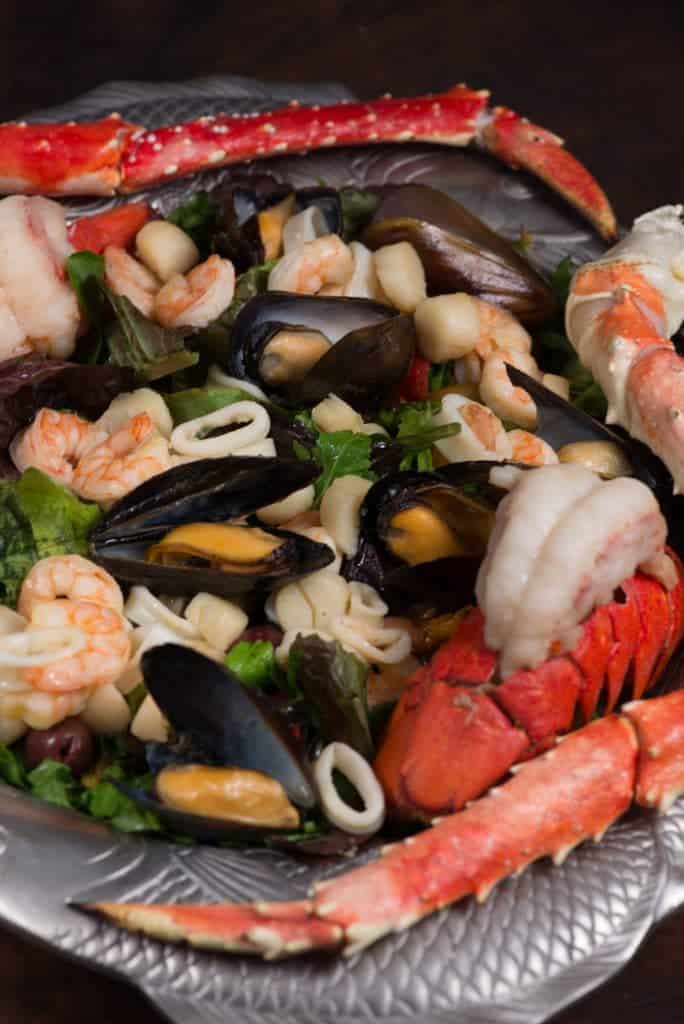 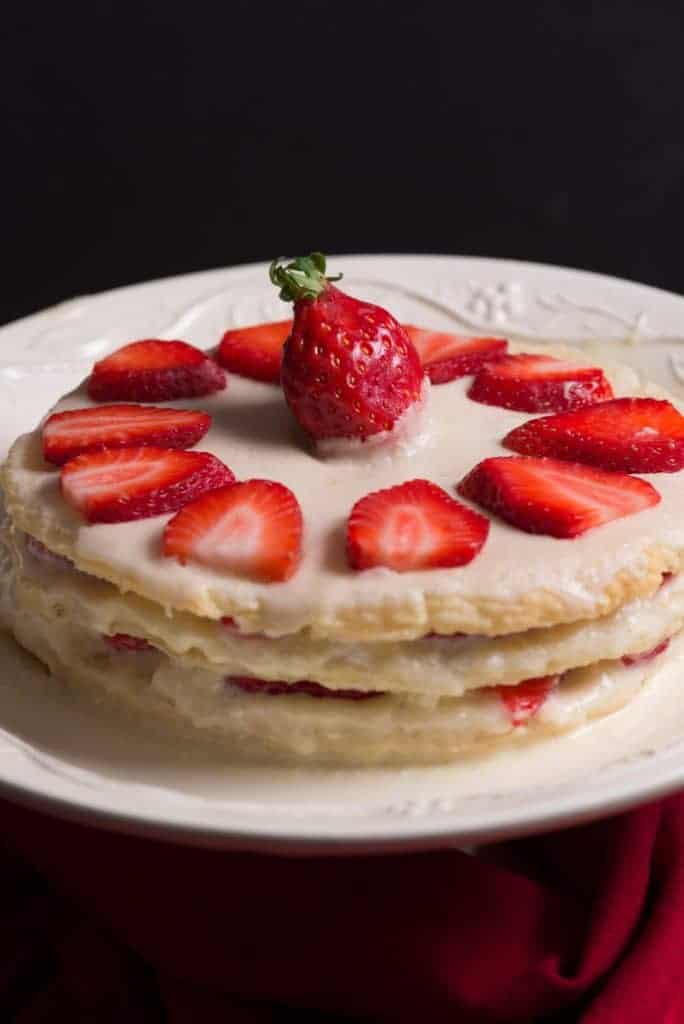 We set the scene at our table in red and white décor, as those are the colors of Monaco. There much beloved soccer team, AS Monaco, wears red and white uniforms and are referred to as Les Rouge et Blanc (the red and whites.) The flag is also red and white, exactly the same as Indonesia’s flag, except Indonesia’s flag is a bit wider.  Carnations adorned the table as well, as it is the national flower of Monaco.  Of course we added in our racing flags, since we absolutely love Formula One and hope to make it to the Grand Prix of Monaco one of these years.

We began with “a la votre” which means “to your health” and we clinked our plastic cups filled with ice and a light rose’ wine. We each had a hot serving of socca, a delicious chickpea crepe, flavored with a touch of rosemary.   It was wonderful on its own, but we imagined it could be flavored with all sorts of different herbs and would also make a lovely pizza base as well.  The plastic cups of wine is how socca is served on the streets of Monaco.

Next was a hearty and savory vegetable soup, called soupe au pistou.   It was topped with a delicious garnish, made of tomato, herbs, parmesan cheese, garlic and olive oil.  The garnish made this pretty ordinary vegetable soup into and extraordinary one.  We loved it served with a nice warm baguette.

For the main course we reveled in the most extravagant seafood salad; lobster, crab, mussels, scallops, shrimp and calamari, served on a bed of fresh baby greens.  The salad had a light balsamic dressing and was served with lemon.  The salad was also garnished with a few kalamata olives, the perfect addition of a salty finish. We enjoyed this amazing salad with a little bubbly.  Did I mention champagne is the national drink of Monaco?

For dessert we had the light and delicious fraise millefeuille, named after Prince Albert, as it is said to be his favorite.  He is onto something.  It is a light pastry topped with cream and strawberries and pairs perfectly with champagne.

After our feast, we sat down and watched an old classic racing movie, Gran Prix, starring James Garner that was filmed in Monaco.  The race is held at the end of May, which is right around the corner.  Could this be our year?  At the very least, we will have a wonderful meal to enjoy while watching it.

I leave you with a quote from the late Grace Kelly.

“I would like to be remembered as someone who accomplished useful deeds, and who was a kind and loving person.  I would like to leave the memory of a human being with a correct attitude and who did her best to help others.”