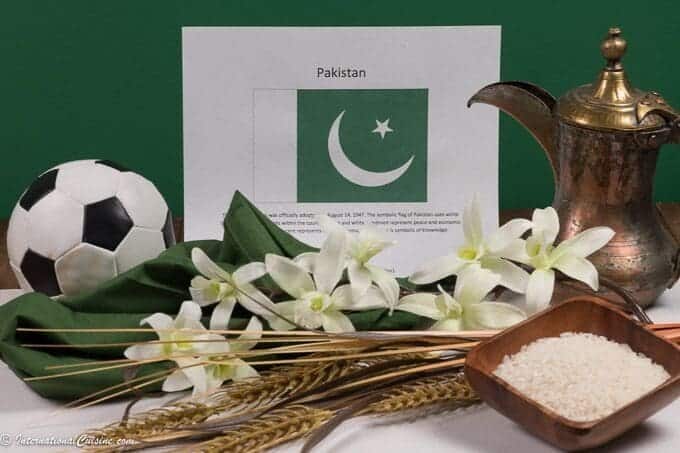 Pakistan is officially called the Islamic Republic of Pakistan.  Pakistan means “Land of the Pure,” in both Urdu and Pashto.  It is believed it was named by Chaudry Rahmat Ali, by using the first letters of the five provinces that make up Pakistan: P for Punjab, A for Afghania, K for Kashmir, S for Sindh and TAN for the Balochistan province.  Chaudry was the author of a famous 1933 pamphlet titled, “Now or Never; Are We to Live or Perish Forever”, which is where the acronym first appeared.

Pakistan, located in south Asia, is bordered by India to the east, Afghanistan to the west, Iran to the southwest, China to the northeast and the Arabian Sea to the south.  Pakistan is blessed with an array of different landscapes; deserts, plains, forests, hills and coastal areas.  Pakistan has the only fertile desert and the largest glacier outside of the polar regions. The northern area has five of the seventeen highest peaks and in the world.  K2 is the second tallest mountain, after Mt. Everest and rises to an imposing 28,251 feet above sea level.  Its name comes from the mountain range, Karakoram.  Its nickname is “Savage Mountain,” due to the extreme difficulty of ascent.  Pakistan has many beautiful natural sights and historic landmarks.  Lonely Planet says "Pakistan may become the next big thing in travel".

The area of Pakistan was home to the Indus Valley civilization, one of the oldest in the world.  The city of Harappa flourished along the Riva River between 3000-1500 BC.  It has a rich history of invaders including the Aryans, the Persians, Alexander the Great, the Greeks, the Parthians and the Turks.  Babar, a Muslim ruler from Afghanistan, established the Mogul Empire.  In the 1700s, the British took over control of the East India Company.  In the 1940s, the Muslim League demanded partition from the British, of a separate nation for India’s Muslims.

Pakistan gained independence from the British on August 14, 1947.  Pakistan is the only country to have been created in the name of Islam.  It was the result of the Pakistan movement, led by Muhammad Ali Jinnah, who is considered the founding father of Pakistan.  He died of tuberculosis very shortly after Independence, when he was named Governor-General.  Had the man who was asked to make the partition (Cyril Radcliffe) known how sick Jinnah was, it is very likely the lines would not have been drawn at all.  Those lines resulted in 12 million people becoming refugees and between a half a million and a million people being killed in religious violence.  Unfortunately, the lines drawn to establish Pakistan, remain some of the most hotly contested land borders in the world.  India and Pakistan, to this day, are bitter enemies over them.

In 1948, war broke out with India over the disputed territory of Kashmir, which still remains in turmoil.  Bangladesh, formerly known as East Pakistan, declared Independence on March 25, 1971.  This precipitated a horrible. nine month liberation war between the two countries, which killed millions more innocent people. There has been way too much bloodshed over these borders.

There is also a dangerous border area with Afghanistan where it is believed terrorists are harbored and operate on both sides of the border.  The Taliban (one of the terrorist groups) is present in both Pakistan and Afghanistan.  Pakistan is accused of not doing enough to act against extremist groups; an issue which just caused the USA to put Pakistan back on the “gray list,” a global-terrorism, financing watchlist.  They have a year to prove they are doing the right things to prosecute extremist leaders, and shut down their financing streams.  Pakistan is also the place where Osama bin Laden, the mastermind of the 911 terror attacks in the USA, was hiding out. That is until he was killed in an undercover mission by the US special forces.

Today, Pakistan is a nuclear power, ranked ninth in the world as a super power, because of this arsenal.  They have the sixth largest army in the world and have some of the top, air force pilots. They also are known for manufacturing fighter jets, which they now are exporting and they have some of the best missile technology in the world.  Pakistan is also the world’s fifth most populous country and has a growing economy.  The official languages are Urdu and English, although, some 60 languages are spoken there.  The literacy rate has been poor in Pakistan, however they have been making great strides in recent years with a 250 percent increase in their literacy rate through education.  Education is important in Pakistan and they are listed as having the seventh largest pool of engineers and scientists.  The Lahore University of Management Sciences attracts thousands of international students. It is considered to be the best university in the country.

As we look into the cuisine of Pakistan, we see it is heavily influenced by its past, when it was part of India.  It has influences from Central Asia, as well as their rich Mughal legacy.  As with most countries, the cuisine of Pakistan is regional and largely based on the ethnicity and diversity of its people.  Generally speaking, the eastern region is known for its highly seasoned and spicy cuisine, reminiscent of the Indian subcontinent.  Cuisine from the western and northern provinces are characterized by milder dishes, with more influence coming from Central Asia.  It has Middle Eastern flavors, as well.  Pork and alcohol are forbidden, as 97% of the population is Muslim.  Mutton, beef and chicken, as well as seafood from along the coast, are the proteins of choice for the wealthy.  Lentils (or dahls) supply protein for the rest of the population. Nearly 2/3rds of the population lives on $2 a day.

The main spices used in Pakistani cuisine are: chili powder, curry, ginger, garlic, coriander, cumin, cinnamon, saffron and turmeric.  Sabzi (fresh herbs and vegetables) or kachumber salad are typically served with the main meal.  Flat breads like naan and roti, are also served with the meals and rice is ubiquitous as well.  Pakistan is the one of the largest producers and exporters of both rice and wheat in the world.  They also have one of the largest irrigation systems in the world. The spicy, main dishes are often accompanied by dishes that soothe the spicy flavors.  These come in the form of chutneys, made with coriander and mint, raita (a yogurt dish) and lassi, (a delicious drink made with yogurt) which is often flavored with mangoes, for which Pakistan is also famous, and is the national fruit.   A sugarcane drink called roh is the national drink.

So let’s enjoy a Pakistani meal: 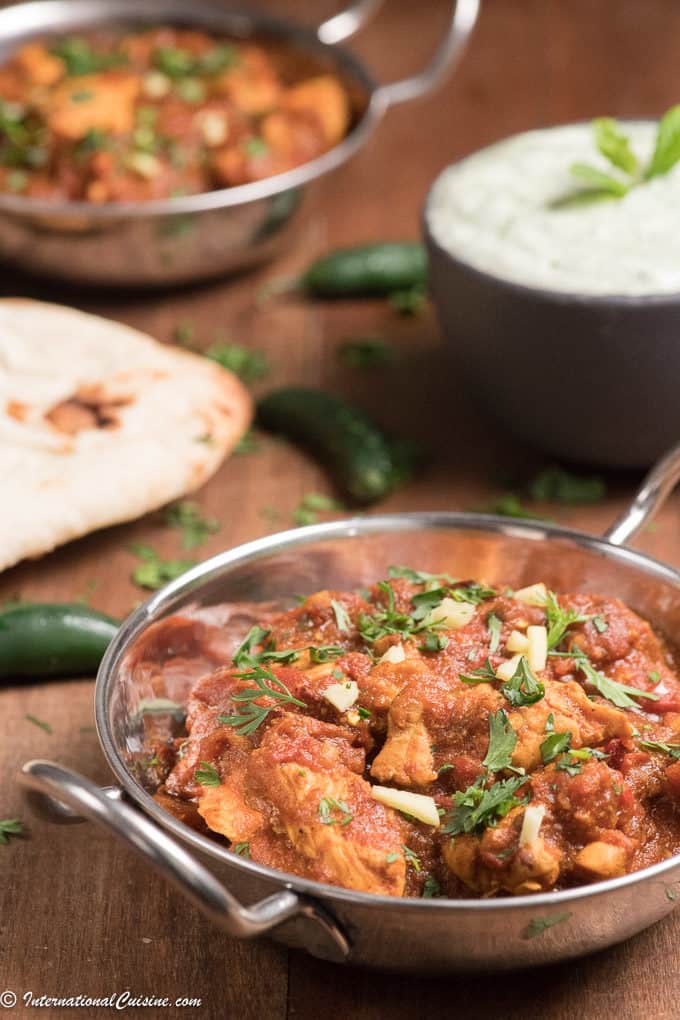 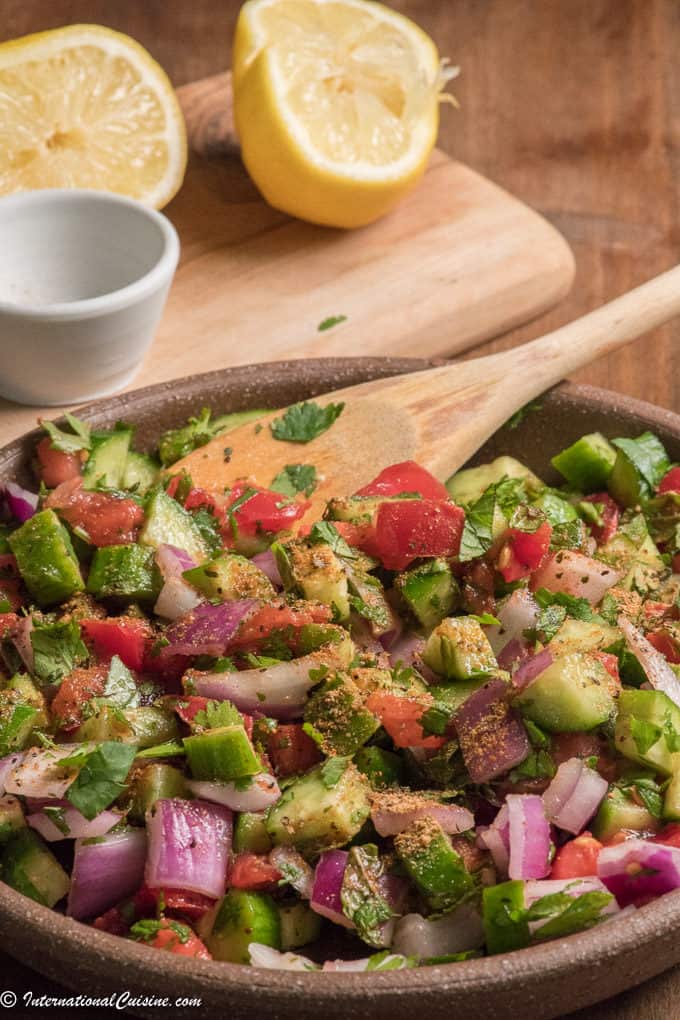 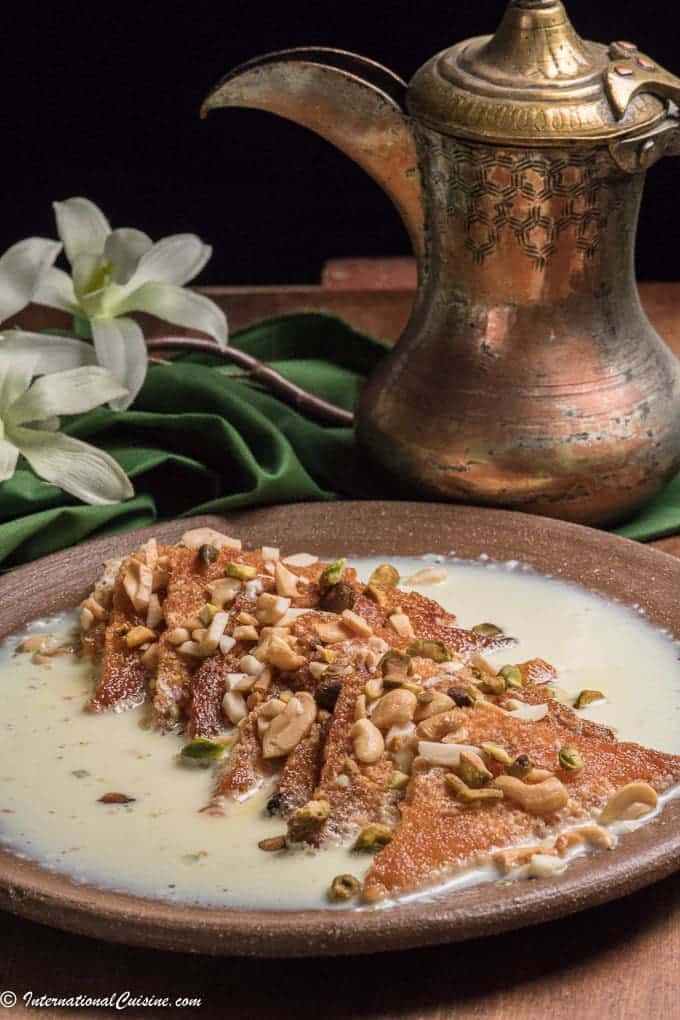 We sat down on the floor on our dastarkhan (a floor covering) and surrounded it with cushions.  We began with handwashing, as we would eat the meal with only our right hand, which is customary there.  We decorated with the colors of Pakistan; green and white.  We also breathed in the fragrance of jasmine, which is the national flower of Pakistan.  A soccer ball was also part of the décor, not because it is the national sport (which is cricket), but because Pakistan makes them for the rest of the world.

Our first course was shami kababs, a delicious patty style, kebab made of chicken and yellow split peas.  They were soft and flavorful and perfect when dipped into the green coriander chutney, served as an accompaniment.

The main course, chicken karahi  (chicken curry), was served with raita, a creamy yogurt mixture.  It is a cooing agent for the spicy curry.  A kachumber salad made with cucumbers, tomato, onion and fresh herbs was also part of the main meal.  It was dressed simply, with lemon juice, making it extremely healthful.  It was sprinkled with a spice mixture called chaat masala, that was tangy and spicy, at the same time.  Aside from being used on this salad, chaat masala is also loved on hard-boiled eggs and fruit.  We had fresh, naan bread, which makes just the right scoop to enjoy the salad and the spicy goodness of the chicken karahi.  You can get the naan recipe here.

For dessert we had a dish made for royalty, called shahi tukra.  It was a scrumptious, bread pudding, made from crispy pieces of bread that were fried in ghee (clarified butter) and then smothered in a rabadi or milk sauce, flavored with saffron and cardamom.  The whole dish was garnished with three different types of nuts.

After our meal, we sat back on our soft cushions and contemplated how different things would have been had the British chosen not to make a partition, leaving India whole, as it was in the past.

We then watched the documentary, He Named Me Malala.  This film is about the young Pakistani girl, Malala Yousafzai, who was shot in the head and nearly killed by the Taliban for going to school.  She is the youngest ever Nobel Peace Prize Laureate and a superstar advocate for girls education and children’s rights.  I leave you with a few of her famous quotes.

“We realize the importance of our voices only when we are silenced.”

“When the whole world is silent, even one voice becomes powerful.”

“One child, one teacher, one book, one pen, can change the world.”