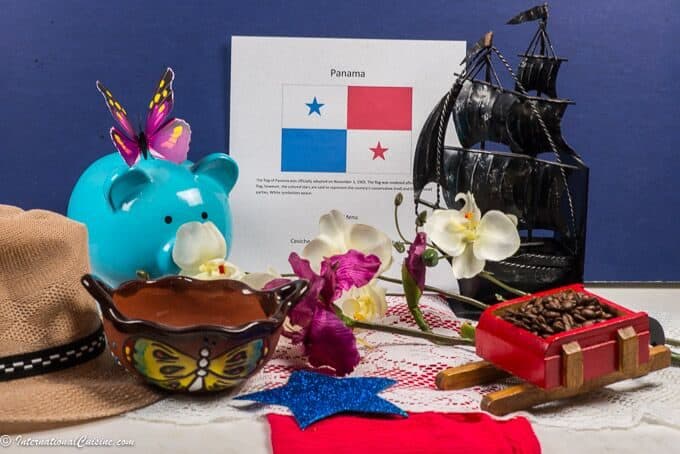 How did Panama get its name?

Theories abound about how Panama got its name.  Some believe that it was named after a tree known as the Panama tree (Sterculia apetala).  Another theory is that the first settlers arrived in August, when butterflies are abundant and that the name means “many butterflies” in an indigenous language.  The most believed version is that a fishing village and beach were called Panama, which meant “an abundance of fish,”  It was discovered by the Spanish, while they explored the area in 1515, and stopped in this small fishing village.  The official definition, approved by the Ministry of Education, is that Panama means “abundance of fish, trees and butterflies.”  However, there are some that believe the name means “distant or far away” which stems from the word “bannaba” in the Kuna Language.  Today it is officially known as the Republic of Panama.

Where is Panama located?

Panama is located in Central America.  It is an “S” shaped isthmus that connects north and south America and separates the Atlantic Ocean (Caribbean Sea) from the Pacific Ocean (Gulf of Panama).  Its unique coastlines run east and west, rather than north and south.  Panama is the only place on earth where you can see the sun rise over the Pacific and set on the Atlantic.  It is also a place where, if you hike up to the highest peak, you can see both coasts on a clear day.  Panama is also blessed with no hurricanes or earthquakes, a rarity in this area.  Panama lies in between Costa Rica and Colombia.  It has a year round tropical climate, with high humidity.  This tropical environment supports an abundance of plants and jungles.  About 40 percent of Panama is wooded.  Subsistence farming is the way of life of Panamanians, from the northeastern jungles to the southwestern grasslands.   They grow mainly corn, beans, sugarcane, coffee and tubers.  There are also large banana plantations, in the swamp areas near Costa Rica.

A Brief History of Panama

The first humans that lived in Panama are believed to have arrived there around 11,000 B.C. By 2,500 B.C., the indigenous people were making pottery, and trading with others as far north as Mexico, and as far south as Peru.  The original native American tribes were, the Cocle and Cuevas people.  The Spanish were the first Europeans to arrive, in 1501.  As is typical after colonization, most of the native people died from diseases brought in by the Europeans, for which they had no immunity.  The Spanish also enslaved the native people and when they did not have enough people left, they started importing slaves from Africa.

In 1513, Vasca de Balboa made his famous trek from the Atlantic Ocean to the Pacific, across the isthmus of Panama.  This trip was a critical turning point for Panama, in becoming a major trading center.  This was a short cut, saving ships from having to travel all the way around the cape.  For years, goods brought to the shores of Panama, trekked across the land and were put on ships bound for Spain.  It was, however, a dangerous road, nicknamed the “Camino de Cruces” or “Road of the Crosses”, due to all the people who died along the way.  Spain ruled over Panama for nearly 300 years, until Panama left the Spanish Empire and became part of Columbia.

In 1903 Colombia and Panama had a disagreement about the United States building a canal across Panama.  With the support of the USA, Panama broke away from Columbia and declared their independence on Nov 3, 1903.  There are three days celebrated each year in Panama:  November 3-5.  It begins with Separation Day, then Flag Day and ending with Colon’ Day, celebrated for when the citizens of Colon’ averted a march on Panama City by the Colombian Army.  They also celebrate their independence from Spain on November 28, each year.

The famous Panama Canal was completed in 1914 and Panama remained a US territory until 1979, when they took total control over the canal on December 31, 1999.  The canal is an artificial waterway that connects two oceans.  It was widened to allow the larger ships to pass.  The widening project was completed in June of 2016.  The canal accounts for 1/3rd of Panamas GDP, as tolls are paid for the ships to cross.  The lowest toll was $.36  and was paid by Richard Halliburton who swam through the canal in 1928.  Today, the average fee is $54,000 for shipping vessels.  The canal has been named one of the seven wonders of the modern world.

Panama has suffered, like many countries, with dictators that did not have the people’s best interest at heart.  One such dictator was Manuel Noriega, who spent many years in US custody on drug trafficking charges.  He was then extradited to France where he spent a seven year imprisonment for money laundering.  In 2011, France extradited him back to Panama where he was incarcerated for crimes committed during his rule and where he ultimately died.  Panama has since had fair elections and even elected their first woman president in 1999.

Today Panama is on a great path of prosperity with tourism, and banking. They have excellent tax incentives for foreign investment and for Americans who want to call Panama their home.

The population of Panama is a mix of creoles, mestizos, European immigrants, Africans and indigenous Indians.  It is a popular place for Americans to retire. There is also a small Chinese population.  The total population is nearly 4,000,000.  About 85 percent of the population is Roman Catholic, while traditional beliefs have been maintained among the native Americans.  The most important ritual celebrated is Carnaval, for which the capital closes down for five days, before Ash Wednesday.

The currency is the US dollar and the official language is Spanish, although many speak English and indigenous languages as well.  Panama is also famous for its traditional dress. Women wear the pollera, which is a blouse and long skirt.  It is formed by multicolored cloth and intricate embroidery.  Panama celebrates Pollera Day each July 22.   The men wear a white long sleeved shirt called a camisilla, black long pants and a straw hat with black lines.  A small bag hangs on the left side of the body and black and white shoes are worn to complete the outfit.  These costumes are worn during Carnaval, folklore events and town festivities.  Their costumes have received international praise, mainly due to the pollera’s complex design.

Panama City is the capital city and where most of the population resides.  It is famous for its ultra-modern skyline.  Panama has become important for banking and insurance.  It is known as the financial hub of Latin America.  Aside from the tall modern buildings, Panama City also has a historic old quarter that is four avenues wide and completely filled with charm.   It is called Casca Veijo and is protected by UNESCO.  The old Quarter has narrow brick roads and grand old colonial houses with stunning pastel facades.  It is a wonderful place to enjoy dinner and drinks.  Panama City is also the only metropolis that boasts a tropical rainforest within the city limits.  The Natural Metropolitan Park is a draw for nature lovers.

Panama, having two coasts and 500 rivers, along with jungles and rain forests, makes the country an adventure traveler’s dream.  Water sports of every imaginable type are found here.  Turquoise water and golden beaches are also a huge draw, as is the canal  itself.  Home to all sorts of wildlife, there are 125 animal species found there that are found nowhere else in the world.  Panama is also a birdwatcher’s paradise, with over 900 species.  One of the most sought after birds, the harpy eagle, can weigh up to 20 lbs. and is the national bird of Panama.

Panamanian cuisine is as diverse as its population.  Each ethnic group brings its own blend of spices, recipes, ingredients and cooking methods.  The cuisine is generally a fusion of Latin, Afro-Caribbean, Asian and indigenous cultures.  Along both coasts, the diet consists mainly of coconut, seafood, root vegetables and tropical fruits.  Inland, the communities are based on agriculture, so they enjoy mainly root vegetables, plus, beans and rice and fruits.  Livestock, such as cows, chickens and pigs are also commonly eaten.  Corn is a staple ingredient but not too many greens are consumed.  However, they do use a cousin to cilantro, in their national dish called, sancocho.  Beer is popular all over the country.  Generally speaking, the cuisine is somewhat mild, except for a few spicy dishes on the Caribbean side.

So let’s enjoy a Panamanian meal: 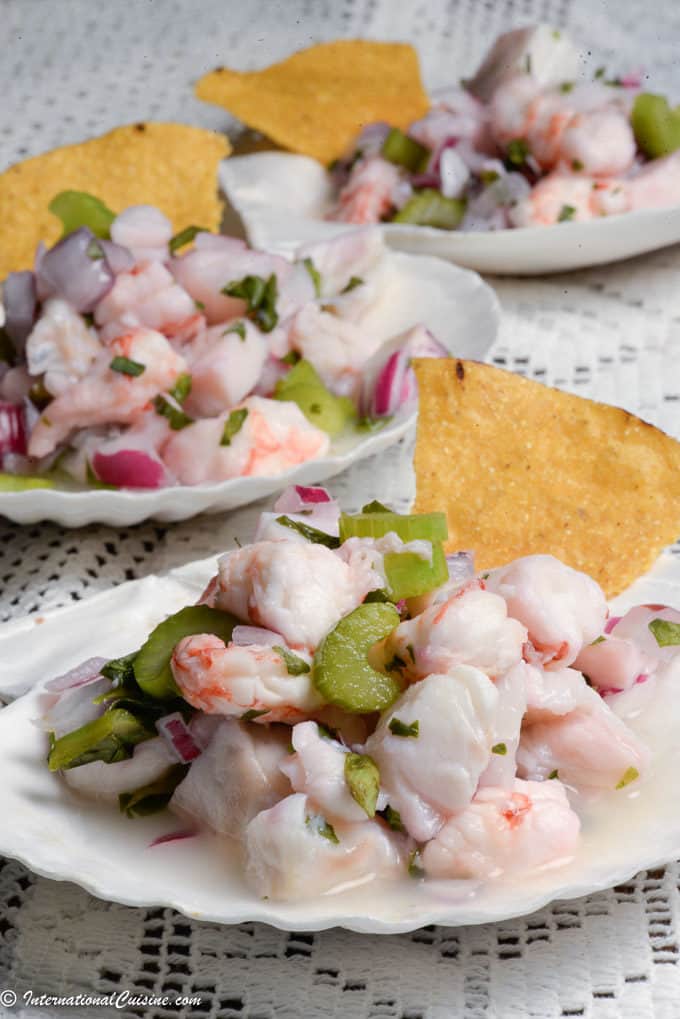 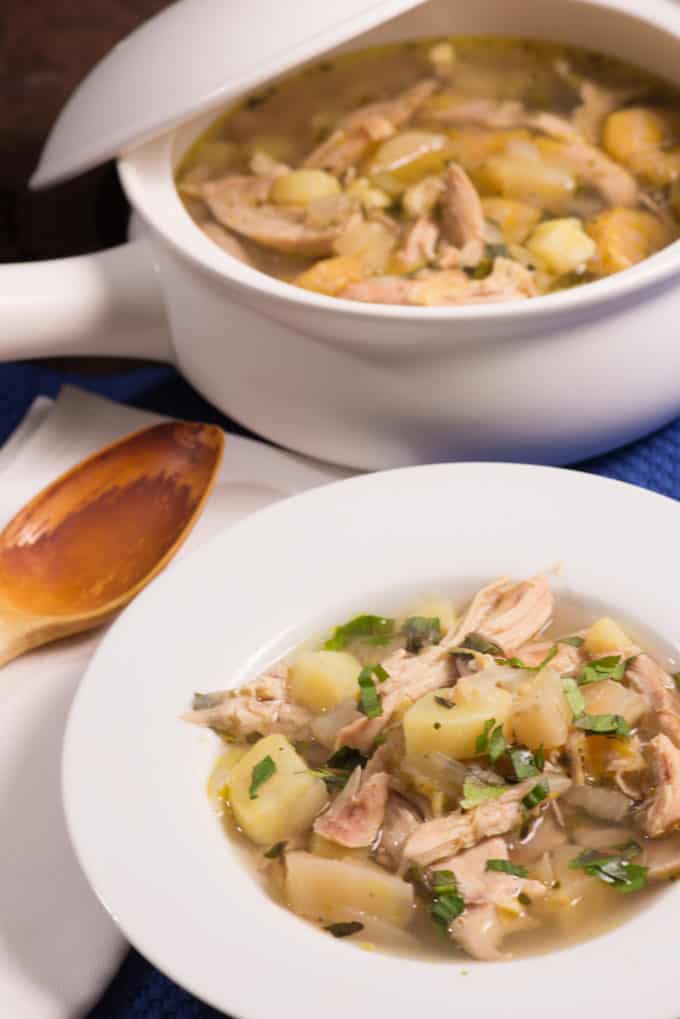 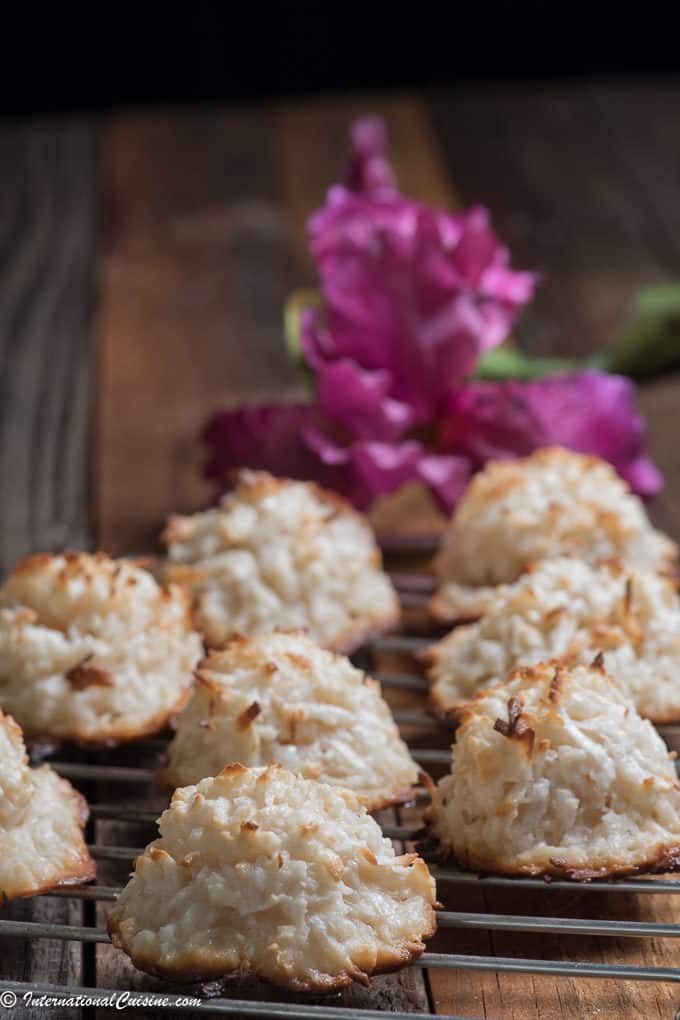 We set the scene with the colors of the flag; red white and blue.  We placed orchids of purple and white, as that is the national flower of Panama, with over 1200 varieties.  A ship was added to represent the very important Panama Canal and a piggy bank to represent the financial haven Panama has become.  A butterfly represented the land of butterflies.  We included a cart of coffee, as it is an important crop and also a Panama hat (that are actually made in Ecuador) but made famous in Panama.

We began our meal with buen provencho, which means bon-appetit in Spanish.  Our starter course was an amazing white sea bass ceviche.  The dish was made with fresh white sea bass and shrimp. It also had celery, which added a wonderful texture. The fish was “cooked” in lemon juice.  It was served with chips and saltine crackers and was an immediate hit.

The main course was sancocho which in Spanish means, “to parboil.”  It is a popular dish in many Latin countries, although each country adds its own interpretation.  This sancocho is made with chicken and root vegetables, such as yam or yucca.  It is the flavoring of culantro that makes this Panamanian dish unique.  Culantro,tastes similar to cilantro, but is a bit stronger.  Ultimately, this is a hearty chicken soup that is known to cure whatever ails you, (especially a hangover.)  We loved it!

For dessert, we had delicious coconut cookies, called cocades.  They are similar to a macaroon, except they are made with sweetened, condensed milk, instead of eggs.  They were perfect with a cup of Panamanian coffee, for which they are now famous.  They grow a particular type, called Geisha that originally came from Ethiopia but has been growing very well in Panama.  This coffee lacks the bitter or sour notes and sells for about $40/lb.  You can pick some up here if you would like to try it.

After dinner, we decided to go for a dance lesson.  Panamanians love to gather together and dance.  Punto panmeño is considered to be the most elegant and beautiful of dances.