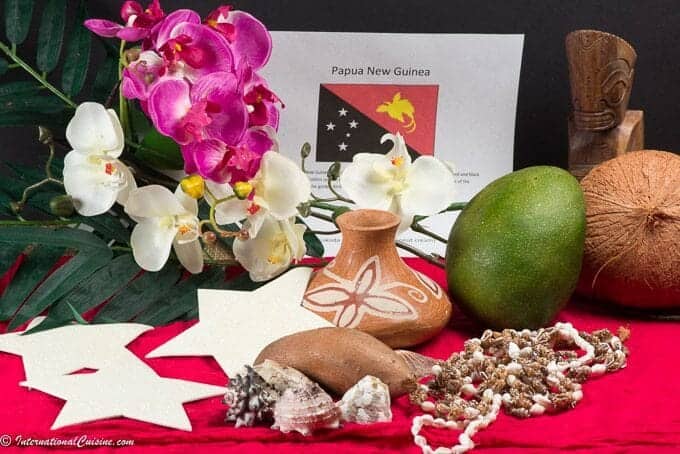 How did Papua New Guinea get its Name?

Papua is the original name of the island, which is the second largest island in the world, after Greenland.  It is believed that the word Papua means “frizzy hair,” which was used to describe the Melanesians that resided there. Later, when the Spanish arrived, it was called New Guinea because of the similarity in the look of the local population, with those the explorer had encountered off the coast of Guinea in Africa; Hence the name, Papua New Guinea.

Where is Papua New Guinea Located?

Prehistory of Papua New Guinea dates back some 60,000 years when descendants from Africa first migrated toward the Australian continent.  The first known Europeans to sight New Guinea, were most likely Portuguese and Spanish sailors in the early part of the 16th century.  Europeans explored the coastlines and found artifacts that included: bone, wood and stone tools, as well as a productive agricultural system.  It was 1870, when the Russian anthropologist, Nicholai Miklukho-Makai, made a number of expeditions to New Guinea and documented his several years of living among native tribes.

The British and Germans held parts of the island until 1902, when it was placed under the authority of the Commonwealth of Australia.  Shortly after the Pacific War began, in 1941, the island was invaded by the Japanese.  Brutal attacks occurred.  It was an area of a major military campaign, where 200,000 Japanese military men lost their lives along with 14,000 Australian and American service personnel.  Following the war, Papua New Guinea was placed under the International Trusteeship System.  They gained their independence on September 16, 1975 and shortly thereafter, joined the United Nations.

Home to nearly 7 million people, more than 1/3 of the population, lives in the rugged Highlands.  Papua New Guinea is one of the last places on earth where tribes live and where traditional subsistence cultures thrive.  The island is filled with an estimated, 7000 different cultural groups.  Some also exist, that may have never been identified.  They practice elaborate rituals of death, marriage, feasts and complex initiation rites.  It is also estimated that there are more than  800 local languages.  Pidgin (Tok Pisin,) along with English, Hiri Motu and Papua New Guinean sign language, are the official languages.  It is said to be the most linguistically diverse place on earth.  A large majority (96%) of Papua New Guineans, identify as being members of the Christian faith. The remainder are traditional animist, follow indigenous beliefs or have other practices.

Until quite recently, Papua New Guinea was well known for its practice of cannibalism.  The Korowai tribe is one of the last known tribes to practice cannibalism.  The first recorded case of Westerners meeting this tribe was in 1974. The tribe never even realized that anyone else existed outside their village.  Their belief in evil spirits made it necessary to kill and eat a person that they thought had been taken over by the demon, Khakua.

Let’s just say it is not for the everyday tourist.  The Australian government warns of an array of problems: landslides, car-jackings, gang-violence, venomous snakes, and civil unrest, to name a few.  It has a very little infrastructure.  Perhaps its remoteness and the fact that is generally not a tourist destination, is why you may just choose to visit there.  It is one of the few places left where you can see how tribes live a traditional life style.

The pristine rainforests are home to many rare species of birds and insects.  The beautiful Bird of Paradise is the national bird and 38, of the known 43 species of this bird, are found there.  The Bird of paradise creates stunningly colorful courtship dances with the microscopic mirrors in their feathers.  The sighting of the rare blue and Raggiana varieties, entice birdwatchers from around the world.  Orchids abound, with more than 3000 species that are unique to the country. The national botanical garden, in the capital city of Port Moresby, has the largest collection of orchids in the southern hemisphere.  Papua New Guinea is home to the largest pigeon, the smallest parrot, the longest lizard, the largest butterfly and the tallest Araucaria tree, (which grows up to 70 meters in height,) along with the tallest tropical trees, on the planet.  It is truly one of the most biodiverse countries in the world.  It is renown for its incredibly pristine diving opportunities.  If you were to visit, you definitely should use a well-known tour operator.  It is not a place that you would just show up and try to find a hotel.  Most of the travel to Papua New Guinea is via Australia.

As we look into the food of Papua New Guinea, it is based on subsistence farming.  Root vegetables are king.  Sweet potatoes, called kaukau, were introduced about 300 years ago and are a staple ingredient, as is: cassava, yams and taro root.  Sago is also very popular, along with several greens, many of which are the leaves of the root vegetables.   Pork is the meat of choice and often cooked for feasts.  Seafood is available from the rivers and coastal areas.  Chickens are raised in villages and provide them with protein and rice is also a strong part of their diet.  Local fruits are plentiful, such as: pineapples, pawpaws, mangoes, bananas and passion fruit.  Coconut in all forms is ubiquitous there.

Interestingly, there is a tribe in Papua New Guinea that was talked about quite extensively in a new diet and healthy living book called, The Plant Paradox, by Dr. Steven Gundry.  The tribe, called the Kitavans, who live on a remote island in Papua New Guinea, are one of the longest living people on the planet and seem to never suffer from heart attacks or strokes, despite their heavy smoking and other indulgences.

I highly recommend the book.  As it turns out, what we believe to be healthy eating, isn’t what we think it is.  Foods have been genetically modified and our intestinal flora compromised by them.  I found this book so compelling when I read it, that I have embarked on this diet myself and will note for you, The Plant Paradox, friendly recipes, as we continue on our Journey. If you are interested in the book you can pick up a copy here. 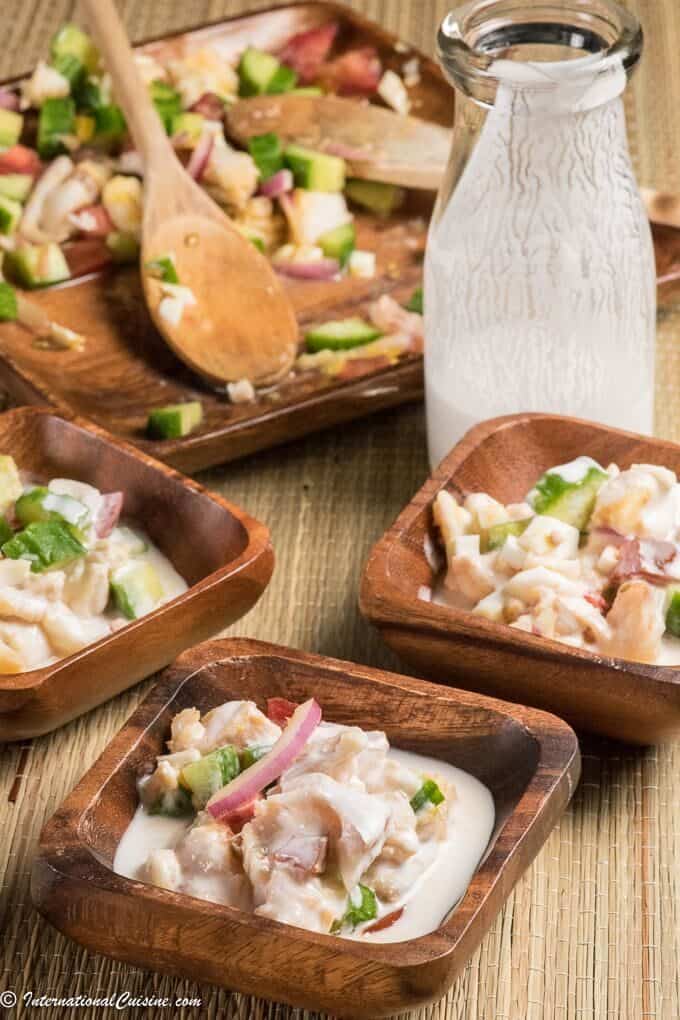 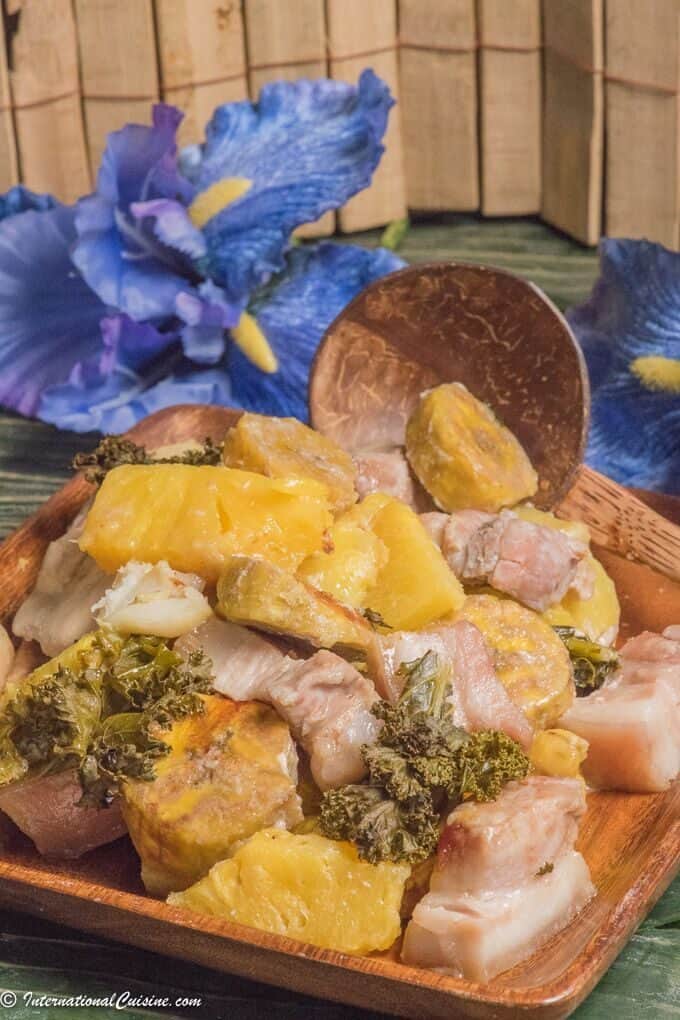 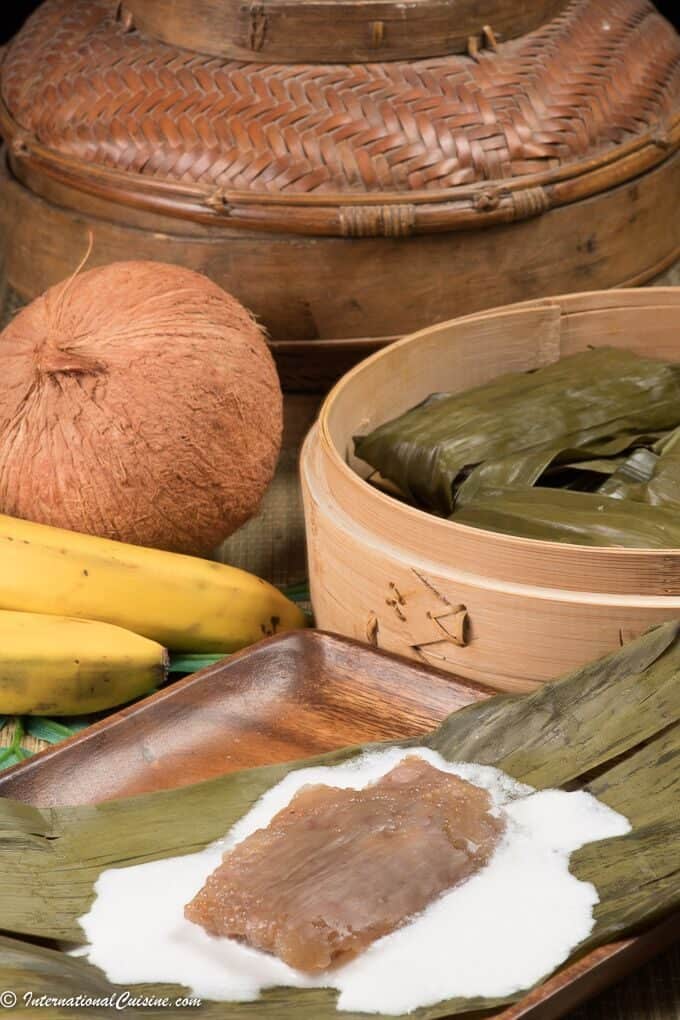 We set the table with a straw mat and decorated with orchids, (which, by the way, the Sepik Blue Orchid, is their national flower.)  We placed a sweet potato, mango and coconut, to represent the typical, tropical cuisine.  We also added a wood carving, as many tribes are famous for this craft.  Pottery and shells completed the décor.  They have been traded, throughout their history, for goods, in return.

We began by saying, Hamamas, which means, Bon Appetit, in Tok Pisin.  Our first course was called Kokoda fish and it was outstanding.  Ceviche style fish is one of my favorite foods and this recipe was quick and easy to make.  The fish first needs to “cook” in the lemon juice.  It is then combined with tomatoes, cucumbers and hard-boiled egg.  It is topped with coconut cream and garlic.  Delicious!

Our main course, considered to be the national dish of Papua New Guinea, is called, mumu. It is typically cooked in a pit, steamed in banana leaves and is really a “one pot” meal.  It is made with greens, pork, chicken, taro, cassava and sweet potatoes, plus pineapple and coconut milk.  It was a lovely dish.  The combination of pork and pineapple and coupled with the creaminess of the coconut milk, was excellent.

For dessert, we had a sago pearl and banana, jelly-like, sweet dumpling, called, saksak.  It was similar in texture to  tapioca pudding.  This dessert, steamed in a banana leaf, was served drenched in warm coconut milk.  It was a perfect tropical dessert to complete our Papua New Guinea meal.

After dinner, we watched a documentary on Papua New Guinea by National Geographic.  It is such a remote island and an intriguing place, with stunning ocean waters, landscapes and intriguing people.  We would love to put Papua New Guinea on our future travel itinerary, despite the travel warnings.  How about you?