How did Slovakia get its name?

The native name, Slovensko, is derived from the older name of the Slovak people.  Sloven was what they were called in 1791.  The name Slovaks stems from the Czech word, Slovaky.  The Germans called it Windischen landen and Windenland, back in the 15th century.  Today the official name is the Slovak Republic, although it is generally referred to as Slovakia.  The Slovakians still call their country Slovensko, in their Slovak language.

Where is Slovakia located?

Slovakia is a landlocked country located literally, in the center of Europe.  It has many neighbors, the Czech Republic on the northwest, Poland to the north, Ukraine and Hungary to the east and Austria to the southwest.  The capital city is Bratislava, which lies in the extreme southwestern corner, close to the border with Austria.

This small country boasts an astounding variety of scenery, from mountains, canyons, and caves (about 6000 of them), to lakes, forests and lowland meadows.  Slovakia’s natural beauty makes it an ideal year-round destination, for outdoor enthusiasts.  The country enjoys four seasons and belongs to the northern, moderate climatic zone.

A brief history of Slovakia

Slavs settled in what is now Slovakia, back in the sixth century AD.  They were taken over by the Avars, until they drove them out at the end of the eighth century.  In the ninth century, they became part of what was known as Great Moravia.  During this time, St. Cyril and St Methodius converted Slovakia to Christianity.  However in the 10th century, a people called the Magyars destroyed the Moravian empire.  They settled down and formed the state of Hungary but they still ruled Slovakia.  Hungary would rule Slovakia for the next 1000 years!

Sometime after 1526, Hungary was dismembered and Slovakia became part of the Austro-Hungarian Empire.  In the late 19th century, the Hungarians tried to “Hungarianize” Slovakia.  To escape oppression may Slovaks emigrated to the USA.  In 1918 Austria collapsed and the new Czech, Slovak, state was born.  It was called Czechoslovakia.  Many Germans lived in the border region of Czechoslovakia, called Sudetenland.  On March 15, 1939, the German army occupied the rest of what is now known as the Czech Republic.  Slovakia became nominally independent.  The new Slovak government was led by Jozef Tiso who introduced a repressive regime.  During World War II about 73,000 Slovak Jews along, with Romas, were deported to be murdered.  In 1946 the communists emerged as the largest party in the region.

In 1993 Slovakia and the Czech Republic separated and became independent.  Slovakia performed poorly at first, suffering from high unemployment in the beginning of the 21st century, but she has recently made good strides.  They became part of the EU in 2004, and joined NATO in 2009.  Zuzana Caputova was elected the first woman president of Slovakia in 2019, and serves a population of 5.4 million Slovakians. Today Slovakia is run as a parliamentary democracy.

Slovakia has a rich, folklore tradition with nearly every region, city and municipality, having their own unique character.  Costumes, music, songs, architecture, customs and dances are preserved in festivals that are held all over the country.  They even have the first architectural village in the world, featuring all original gingerbread houses.  The first mention of this village dates back to 1272.  Many Slovak folklore traditions relate to birth and dying, and several in the fear of the unknown and an inability to explain natural events.  With the arrival of Christianity, new customs and traditions took hold, with Christmas and Easter being two of the most important holidays.  Christianity is the predominant religion in Slovakia with 66 percent being Catholic and about 10 percent being part of the Protestant religion.  There are a total of 18 religions and churches registered there.

Namedays are another important part of Slovak heritage, with each day of the year representing one or two names.  When your name comes up on the calendar it is a party just like a birthday would be.

The official language is Slovak and it is a Slavic language like Russian, Polish and many other East European languages.  It is very similar to Czech and they can readily understand each other.  Slovak is said to be one of the most difficult languages to learn.

Slovakia is home to the largest number of castles and chateaus per capita in the world.  They are also famous for their many natural, thermal spas.  The healing water is said to be very therapeutic.  Kings, politicians and famous people, swear by it.  The water is said to treat the sick, regenerate the tired and bring out a person’s natural beauty.

Slovakia takes its cuisine’s cues from its neighbors.  It features a hearty cuisine, similar to many Eastern European nations.  Their most famous dish is called halusky, which is a potato type, dumpling that is smothered in cheese, but not just any cheese.  It is a sheep’s cheese called bryndza.  This decadent dish is topped off with bits of bacon and is the ultimate example of a true, comfort food.

Nearly every meal in Slovakia will begin with a soup as a starter.  They enjoy soups made from beans, tripe, chicken and noodles.  Their most famous, sauerkraut soup is often served in a bread bowl, called kapustinica.  Goulash is another staple made from various vegetables, potatoes and meat.

Pork, beef and poultry are the main meats in Slovakia, with pork being the most popular.  Every part of the pig is used and made into dried meats as well as delicious sausages, some made with pork blood and rice.  Chicken Paprikash is another very popular dish.  Most meat dishes are either breaded or fried in oil, like a schnitzel.

The traditional food of Slovakia can be traced back to times when the population lived self-sufficiently in villages with very limited imports.  This gave rise to a cuisine dependent on staple foods like wheat, potatoes, milk and milk products, pork, sauerkraut, onions and wild mushrooms.  Spices are not widely used in their cuisine.

The main meal of the day is typically lunch and consists of a soup, main dish and dessert.  Beer is their most popular drink.

So let’s enjoy a Slovakian meal: 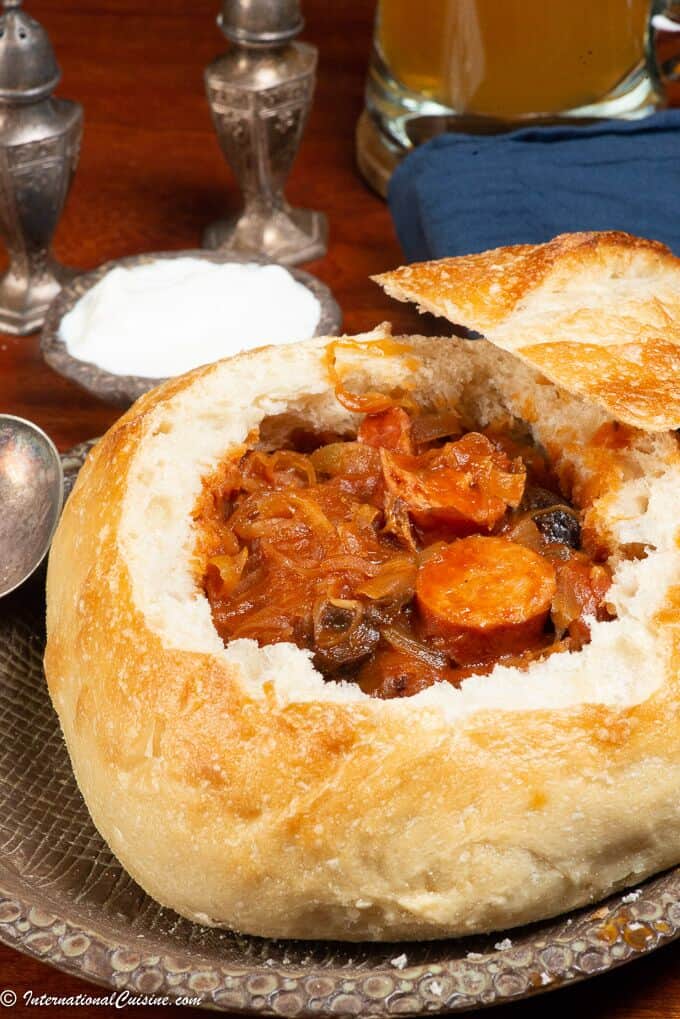 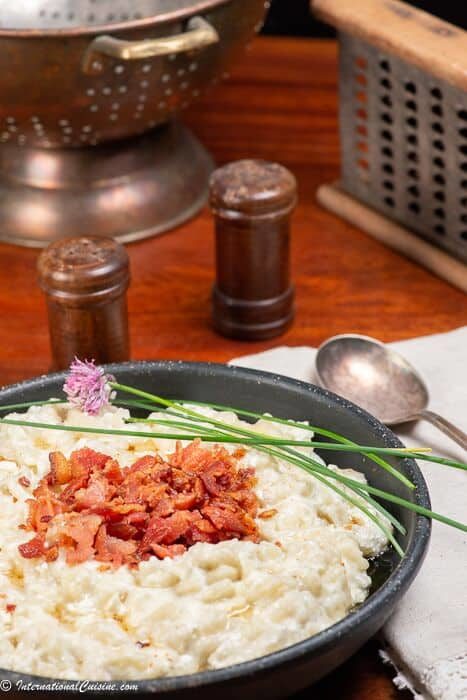 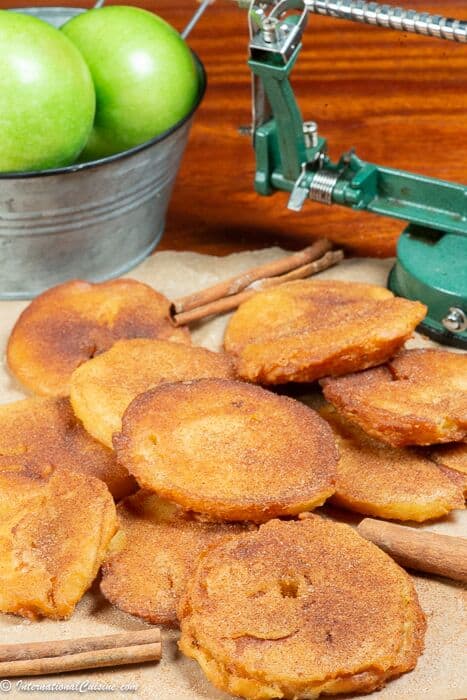 We set the scene with colors of the Slovakian flag; red white and blue.  We placed a few potatoes in the décor, as it is a true staple ingredient, along with a cross to represent Christianity and a hockey stick to represent one of their most beloved sports.  A candle with a picture of their famous Orava castle on it, dating back to 1267, completed the setting.

We began the meal by saying, “Do brou chut” which is the cue to begin eating.  We then toasted with a beer and said “Naz dravie” which means “To your health.”  We ate continental style, which is customary there.  We also left our napkins next to the plate as we ate, as opposed to putting them on our lap.

Our first course was the famous sauerkraut soup, Kapustinca, served in a bread bowl.  This is a hearty soup dish that could easily be a meal unto itself.  It was superb with pieces of sausage in the mix.  We savored every bite and loved the pieces of bread that naturally ended up in the soup from the bread bowl.  Kapustinca is a perfect dish on a cold, winter day.

For the main course we served the hearty, Bryndzove Halusky.  This dish is made of little potato dumplings that reminded us a little of gnocchi.  It is drenched in a sheep’s cheese for which Slovakia is famous.  It was topped with bacon drippings and bits, which made this a truly decadent bite.

For dessert, we had apple slices that were first covered in a batter of egg and flour, fried in oil and then dipped in cinnamon and sugar.  I guess it is the batter covering the apples that gives it the name, “Apples in a Bathrobe.”  They were a true delight.  We enjoyed the apples slices with a cup of robust coffee, which is another beloved drink in Slovakia.  This was another perfect ending to our International Cuisine meal.

As we say goodbye to this intriguing little country in the middle of Europe, I leave you with a few Slovakian proverbs:

Consider each day as your best day.

Not he who begins, but he who finishes is the master.

Don’t praise what is yours; don’t belittle what is another’s.

The truth rises to the surface like oil on water.