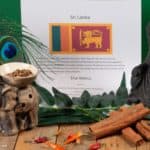 How did Sri Lanka get its name?

“Lanka” is thought to be the first documented name for the island, in Sanskrit, dating back to 5114 BCE. ”Lanka” simply means “Island.”  Another theory is that the name was derived from the Tamil word “Ilanku” meaning “to shine,” or “to glitter.”  This name makes sense due to the glittering of gold and gems found on the island’s surface.

To be honest this island nation has more previous names than can be counted.  I think it must be a record.  In 622 BCE, Arabian Persian Traders called it “Serendib” or “Serendivi” (in Arabic).  The name is believed to have led Horace Walpole to create the word “serendipity” for the English language.

Back in 960 A.D. an Arab author referred to Sri Lanka as “Saheelan.”  When the Portuguese and Dutch arrived the name remained similar until the British called it “Ceylon” in 1796 which remained until 1978 when it was changed officially changed to the “Democratic Socialist Republic of Sri Lanka.” “Sri” means “Resplendent.”  So, today Sri Lanka is known as the ”Land of Serendipity” or “Resplendent Island.”

Where is Sri Lanka located?

Another nickname of Sri Lanka is the “Teardrop of India,” which gives you an idea of the shape of the island, which is located just 21 miles at its closest point from the southeastern tip of India, in the Indian Ocean.  Sri Lanka is considered to be part of Asia. The Maldives lie to the southwest.  Sri Lanka is just slightly above the equator in the northern hemisphere and has a tropical climate.  It has two distinct monsoon seasons.  The capital city, Colombo, is known to be hot and humid.

A brief history of Sri Lanka

It is believed that Sri Lanka has been continuously inhabited for more than two million years.  The original inhabitants were hunters and gatherers from the Stone Age.  Somewhere around the fifth century BCE, immigrants from northern India arrived, forming the modern Sinhalese population.  The Sinhalese population was largely Buddhist and set up the first kingdom around Anuradhapura.  Early Buddhist emissaries brought a cutting from the Bodhi tree, under which Lord Buddha attained enlightenment.  This tree is still standing and is believed to be the oldest tree planted by human beings.  The tree remains an important pilgrimage site.

Tamils, from the south of India, arrived about two centuries after the Sinhalese.  Most Tamils are Hindu or Christian and are a minority in Sri Lanka.

The Portuguese arrived in 1505 and by 1518, having established good relations with the king, were allowed to build a fort at Colombo (the capital city today) for trade concessions, in exchange for the king’s protection.

Meanwhile, the Dutch established a trading fort in Galle, destroying the earlier Portuguese outpost.  Soon the Dutch East India Company controlled most of Ceylon.  However, after 300 years of colonial rule by the treaty of Amiens, Britain gave up control of Ceylon, just after the Napoleonic Wars.

Due to unrest during Colonial rule, the Ceylon National Congress was formed in 1919, uniting Sinhalese and Tamils.  Although some concessions were made, Ceylon did not gain independence until 1948.  Ceylon became the “Republic of Sri Lanka” in 1972.

Unfortunately, tensions between the Sinhalese and Tamils erupted into a bloody civil war, lasting from 1983 to 2009.  It is estimated that the 26 year civil war resulted in tens of thousands of deaths.  After the fighting ended, a Tamil-nationalist, Catholic bishop claimed that 147,000 people, civilians and fighters, remained missing.  The war ended when the leader of the Tamils was killed.  Sri Lanka has been under scrutiny for war crimes against the Tamil.

Sri Lanka is a much different place today, as it has made huge strides in rebuilding their nation. The remaining Tamils and Sinhalese live relatively peacefully together.  Although Sri Lanka still has plenty of work to do, it is often on the list of the one of the best places to visit, due to the warmth of the Sri Lankan people and its beauty as a tropical paradise destination.  Unfortunately, there was a terrorist attack on Easter in 2019 that left 259 people dead and created travel warnings.  Most recently, the covid crisis will cause even more hardship in the rebuilding of the island.

Sri Lanka was colonized by three different cultures all of which clearly left their influences.  The descendants of the Dutch settlers are called Burghers and they are still a considerably influential group.  The British brought over the ritual of high tea, which is still a custom in Sri Lanka today.  Tea plantations were established by the British as the interior mountainous region provided the perfect environment and climate.  Some of the world’s most famous teas still come from Sri Lanka; brands like Ceylon and Lipton.  Visiting tea plantations is a tourist highlight, as they are located in lush, green, picturesque locations.

The largest religious group remains the Buddhists.  The others are Hindus, Muslims and some Christians as well.  Visitors will find Buddhist temples, Hindu kovils, Muslim mosques and Christian churches, throughout the island.

There are three official languages in Sri Lanka: Sinhalese, Tamil and English.  The street signs are typically in all three languages but sometimes, only in English.

There are many UNESCO world heritage sites in Sri Lanka.  Some of the most prominent ones include: Sigiriya, an ancient fortress built atop a huge granite monolith, Polonnaruwa, Sri Lanka’s medieval capital, the Sacred City of Kandy, which has the highly revered Temple of the Tooth, along with the Golden Temple of Dambulla and the old Town of Galle.

Sri Lanka celebrates some 30 holidays per year.  Many are religious holidays that are public holidays for all to celebrate.  One holiday that is celebrated each month is called Poya; an island wide celebration of the full moon.

The official meal of Sri Lanka is rice and curry, a complete meal of steamed heirloom basmati rice surrounded by all sorts of different curries.  Curry comes in many forms in Sri Lanka: meats, poultry, fish and seafood, vegetables and even fruit.  Jack fruit curry is a specialty curry.

As a tropical island with an abundance of vegetation, the cuisine uses all sorts of herbs, spices, fruits and vegetables and especially coconuts, which are ubiquitous throughout the country.  As a country that was a hub in the historic oceanic Silk Road, Sri Lanka traders brought in many new food items and inparted cultural influences which all helped to shape Sri Lankan cuisine.  Some say it is similar to South East Asian cuisine as well as the cuisine of the state of Kerala, in southern India.  Sri Lankan cuisine is spicy and hot, with the heat coming from an array of chilies.

Sri Lanka is famous for its cinnamon, which originated there.  It is often blended with black pepper, which is also indigenous.  Sri Lanka is most famous for its unique spice blends which include:  roasted and then ground coriander seed, cumin, fennel, clove, fenugreek and cinnamon, to name a few.  No doubt every cook in Sri Lanka has their own curry spice blend secrets.  Curry leaves are often used fresh, as are pandan leaves.

Sambols, especially coconut sambal, are served alongside just about everything, as are achars or pickled relishes.  It is not unusual to have multiple curries, sambols and achars served at one time.  Often a dhal (lentil) curry, is served as well.

Another famous Sri Lankan dish is the hopper.  It is a bowl made from a fermented batter of rice flour and coconut milk.  There are special hopper pots that they are steamed or fried to make the bowl shape and then are often served with an egg, and sambols.

Obviously as an island nation, fish and seafood play an important role in the cuisine.  One ubiquitous ingredient is called Maldive fish, which is a cured skip jack tuna that imparts a wonderful umami flavor to their dishes. 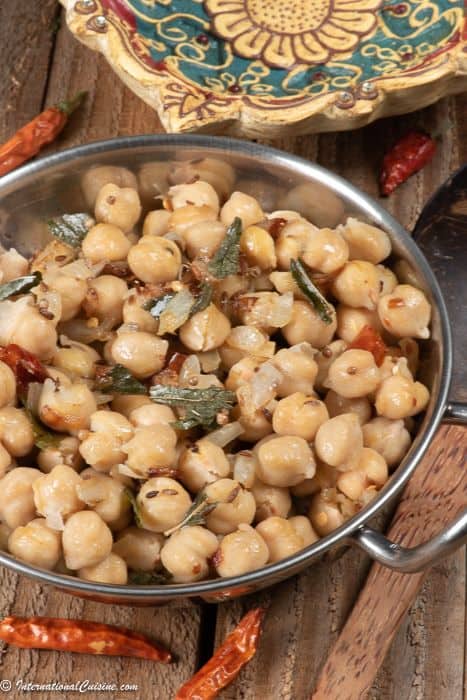 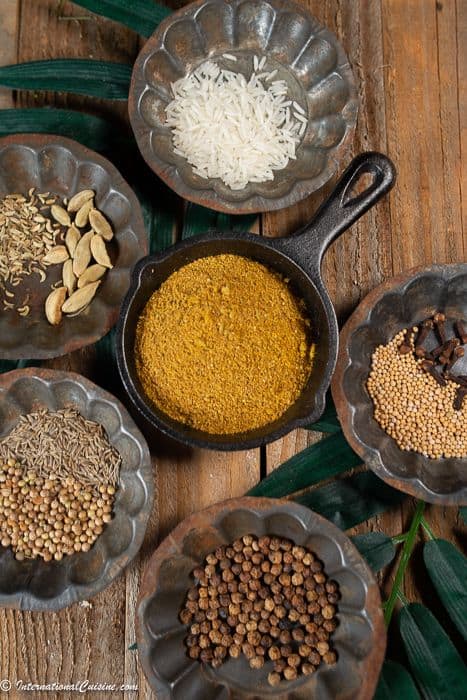 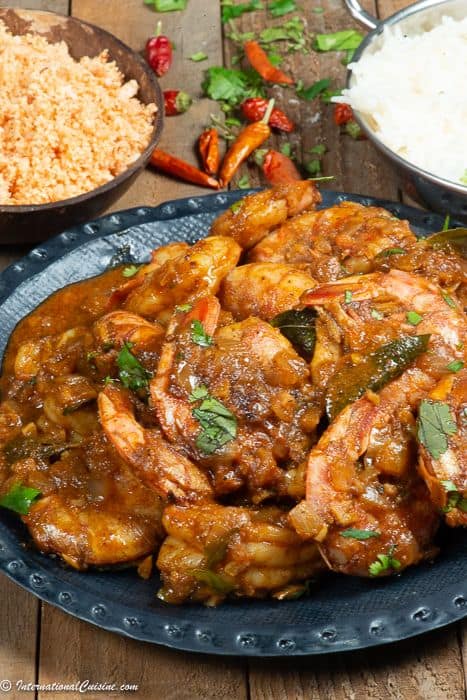 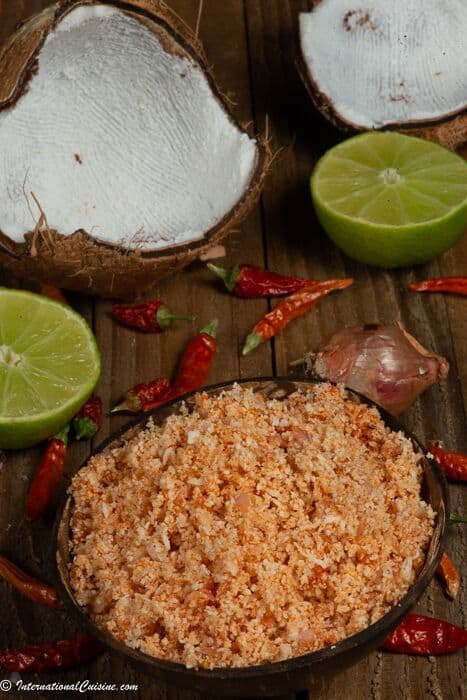 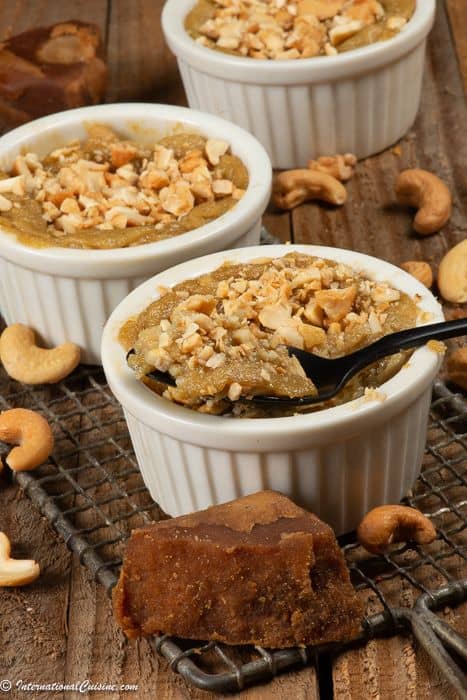 We set the scene with elephant statues, the national animal of Sri Lanka (and which happens to be my spirit animal.)  Sri Lanka has numerous national parks and is famous for the amount of wild elephants that gather in groups in the parks.  The island is also well known for leopards, monkeys, peacocks, and a whole array of birds.  Sea life is also a draw, and it is said you can see the largest land mammal, the elephant and the largest marine mammal, the blue whale, in a single day.  Tea was  placed in the décor, as it is Sri Lanka’s biggest export.  Cinnamon and black pepper were added as well as a coconut.  A Buddha statue was staged to represent the largest religion and a photo of a water lily, the national flower, of Sri Lanka completed the scene.

We began with spiced up chickpeas, which would also be considered a short eat (or snack) in Sri Lanka.  They were spicy with flavors of mustard seeds, cumin and curry leaves and spicy hot from the red chilies.  We loved them.

For the main course, we enjoyed the spicy prawn curry with steamed Basmati rice and the amazing pol sambal.  The prawn curry was full of flavor and  spicy hot too.  We scooped up the curry and rice using our right hand.  They eat with only the right hand in Sri Lanka.

The curry and rice were served with the coconut sambol, a perfectly balanced condiment with which I have fallen completely in love.  On its own, it is perfectly balanced, with sweetness from the grated fresh coconut, sour from lime, spice from chilies and umami from shallots and maldive fish.  A heavenly dish indeed!

For dessert, watalappan was served.  This is has a coconut custard flavor with a kitul jaggery, which comes from the fishtail palm and has a lovely caramel flavor.  It was topped with cashews.  We savored it with a hot cup of Ceylon black tea.

After dinner we sat down to read “The Legend of The Ramayana,” an epic tale of Rama, who traveled to the teardrop island to save his princess bride, Sita.  It is a purely magical story that is part of the culture, the history and souls of the Sri Lankan people.

Be safe and well,