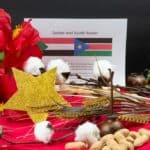 How did Sudan and South Sudan get their names?

The name Sudan comes from Arabic, “Bilad as Sudan” or “Land of the Blacks.”  This name refers to the area south of the Sahara.  South Sudan was named when it became independent of Sudan on July 9, 2011.  It is officially the Republic of South Sudan.  South Sudan is the most newly recognized nation in the world, and joined the United Nations just a few days after Independence, on July 14, 2011.

Where are Sudan and South Sudan located?

South Sudan is a landlocked country, also with many neighbors:  Sudan to the north, Ethiopia to the east, Central African Republic to the south, Democratic Republic of the Congo to the southwest, Uganda to the south and Kenya to the southeast.

Prior to the split of the two countries, Sudan was the largest country in Africa and in the Arab world.

A Brief History of Sudan and South Sudan

The earliest civilizations began in Sudan along the Nile, which grew into the Kingdom of Kush during the eighth century B.C..  Kush conquered Egypt and adopted many facets of Egyptian culture.  Sudan actually has more pyramids than Egypt in the area of Meroe.  The area is a UNESCO World Heritage Site.  The region converted to Christianity in the sixth century A.D., and then to Islam in the 14th century.  Egypt conquered Sudan in the 1820s, turning the country into a slave market.  It administered Sudan jointly with Britain who was keen to control the area around the newly built Suez Canal.

For a time the Sudanese Mahdist armies managed to kick out Egyptian and British forces holding the capital city of Khartoum, until the British re-conquered the territory in 1898.  By the mid-20th century, the Sudanese wanted independence, which was granted in 1956.

Resenting the political domination of the north, the mostly Christian and animist southerners launched a fight against the Khartoum government.  This was the trigger for a civil war conflict that raged on and off for more than 50 years and claimed an estimated two million Sudanese lives.

President Nimeiri ended the first civil war in 1972, granting the south considerable autonomy.  His plans to bring back the economy went bad and after pressure from the north, they rescinded the autonomy agreement with the south.  Civil war returned, along with an army coup.  These cycles of wars and coups have shaped much of Sudan’s post-independence history.

In 1989, General Omar al-Bashir seized power.  He introduced hard line Islamic views, although Sharia (Islamic canonical law) was already instituted in 1980.  It wasn’t until the change of geopolitics, brought about by 911, that Sudan started to shift from its Islamist position.  Sudan saw prosperity from its new oilfields and sought peace with the south, which became independent in July 2011, although clashes continue.  The South fared far worse since Independence, as there has been a constant battle for power between the tribes of this new nation.

As if this were not enough pain for both of these countries, a struggle for resources in Darfur sprang into a full rebellion.  The repression from Bashir led the president to become the first head of state to be indicted by the International Criminal Court for crimes against humanity.  He was finally overthrown in April 2019 by a military coup.  Although there is now some hope for a new leader in a pro-democracy movement, it remains to be seen how it will shake out.  The military are currently running the country, and there will, no doubt, be a new power struggle in their future.

Sudan has a population of about 45 million people.  About 70 percent of the population is Sudanese Arab, with the balance being black ethnic groups like: Fur, Beja, Nuba and Fallata, to name a few.

The population of South Sudan is about 11 million and home to about 60 indigenous ethnic groups. The largest is the Dinka people, followed by the Neur and the Shiluk.

In Sudan, Sunni Muslim is the main religion in the country. The country goes by Sharia law.  There are still indigenous tribes who practice animism, (a belief that all objects, such as trees and rivers, have a spirit.)  There is also a very small Christian minority left in Sudan.  Most Christians have since fled to the south.  The religious makeup in South Sudan is 60 percent Christian, 33 percent African religion (animism) and seven percent Islam.

In Sudan only about 30 percent of the population live in the urban areas; most are nomadic or live rural.  South Sudan is even less urban, at about 20 percent.  In Sudan, some 80 percent of the labor force works in agriculture.  Cotton is Sudan’s primary export, although the crop is vulnerable to drought.  Livestock, sesame, groundnuts, oil and gum Arabic are other important exports.  The country is poor and half of the population lives in poverty.

In South Sudan the main export is petroleum followed by foraged corps and raw cotton, gold and dried legumes.  South Sudan is even poorer than its northern counterpart, with 80 percent living on less than $1 a day.  It is one of the most impoverished countries in the world.  Constant war has taken its toll on both of these nations.

Sudan and South Sudan share many common dishes.  Sudanese food is inspired by colonial rule.  The most important ingredient in the cuisine is porridge, called dura, a starch, typically made from millet, wheat or corn.  The cuisine is also regional with fish being popular along the Nile.  In Sudan, lamb, chicken and beef are the most prevalent meats.  Being a strict Islamic state, pork and alcohol are strictly forbidden.

Typically, Sudanese food is meat heavy, interspersed with vegetables.  Stews, called mullah, are very popular.  Peanuts or ground nuts are also prevalent in Sudanese dishes. Ful Medames is a popular dish made of beans, usually fava beans and some consider it to be the national dish.  On a very sad note, there is a dish called Bush, a poor man’s ful, which is served using the bean water left in the gidra (the pot the beans are cooked in) and sopped up with onions and bread.  It gets its name from the first Bush president who cut aid to Sudan in the early 1990s in response to the Sudanese government’s support of Saddam Hussein in the first Gulf War.  Falafels, made from chickpeas are a popular street snack but not served with the normal accompaniments that you might expect.  Generally speaking, the dishes do not use too many spices or seasonings, but they do like to add dried fruits, especially apricots.

So let’s enjoy a Sudanese Meal: 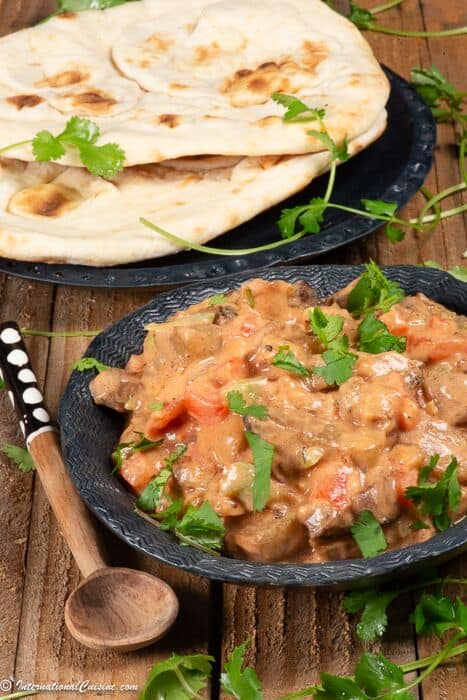 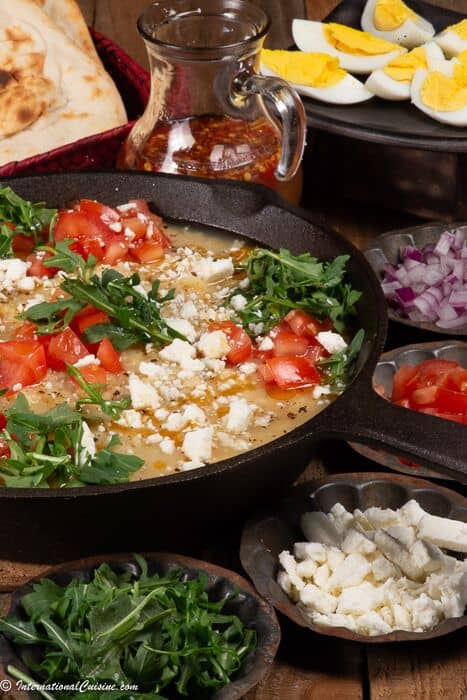 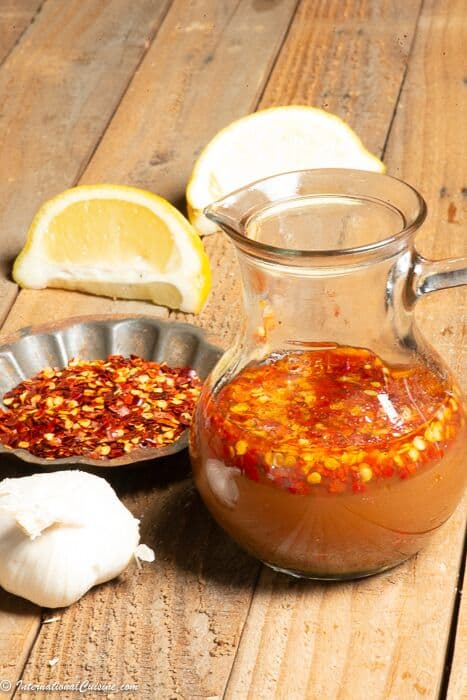 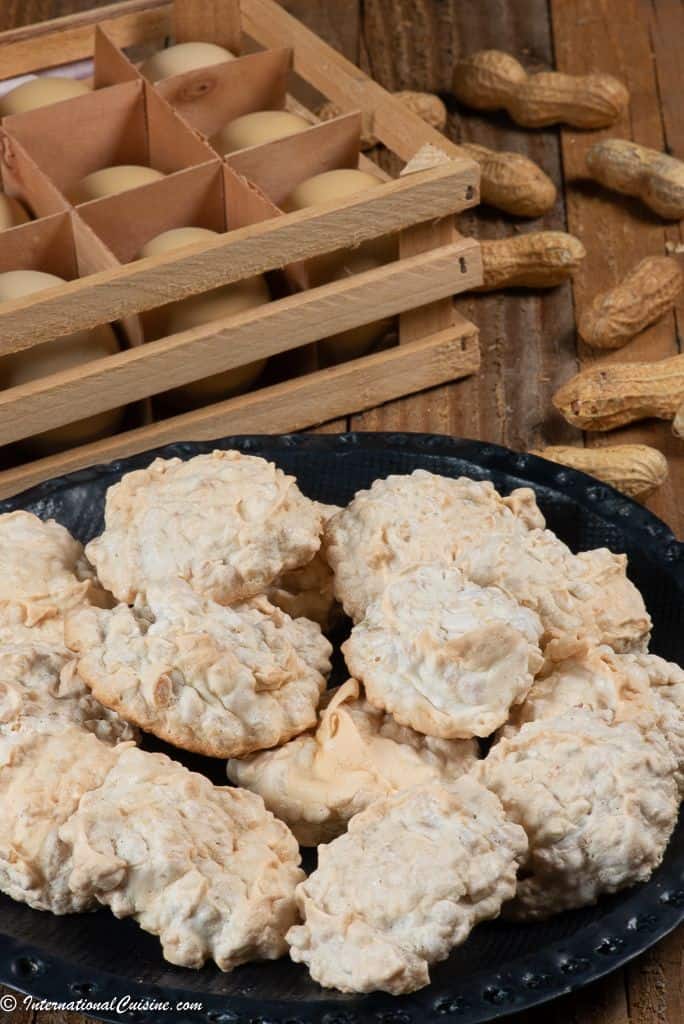 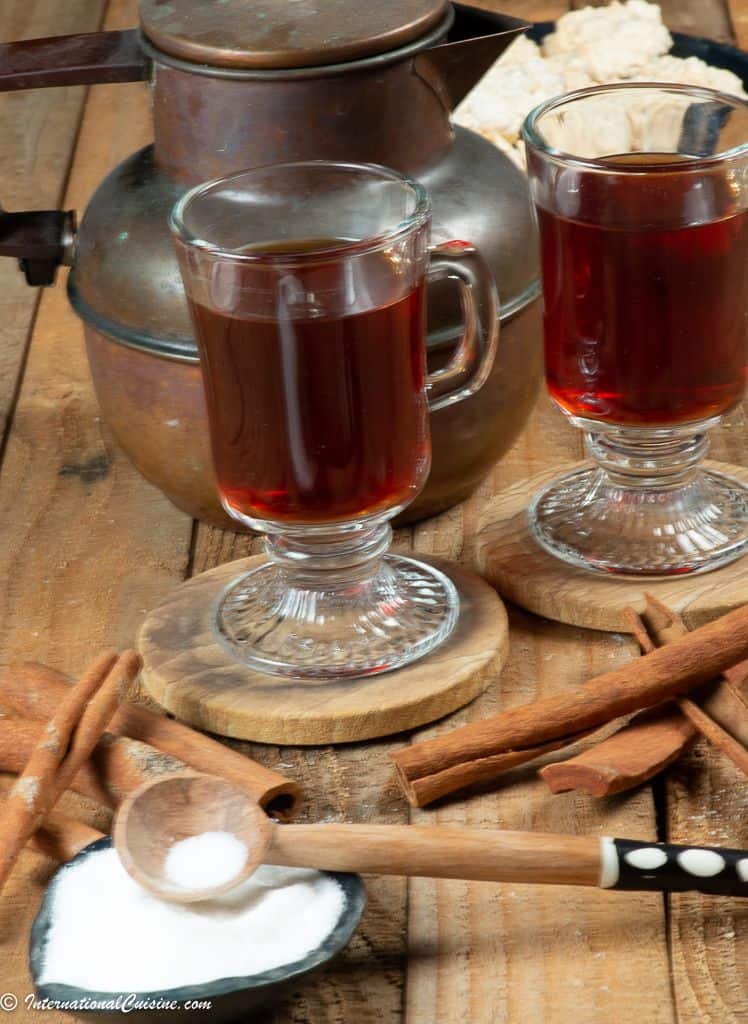 For our Sudanese meal we began with a handwashing.  We would eat sitting on the floor with a communal dish and use only our right hand, as would be customary in both Sudan countries.  Flat bread was a big help in scooping up the food.

Our first dish was a delicious, fried eggplant dip, made with yogurt and peanut butter and tomatoes.  We absolutely loved the combination of flavors.  Typically, this would be served with fermented sorghum flat bread called, kisra.  I tried to make it but it was a failure, so naan would have to be my substitute.

For the main course, we thoroughly enjoyed the national dish called, Ful Medames.  This dish is very popular in many other countries as well.  It is a vegetarian, protein rich, dish that is garnished with onions, tomatoes, arugula, feta cheese, boiled eggs and sesame oil.  Honestly, this dish was perfectly delicious and filling.  It was served with a spicy hot sauce called shata, which is also very popular.

For dessert, little peanut meringue cookies were served that went perfectly with a cup of black tea, spiced up with cinnamon.  In Sudan, they love to enjoy their tea with lots of sugar.

As we say goodbye to the Sudans', I must be honest and say that although we thoroughly enjoyed our International Cuisine meal, we did so with a heavy heart.  Both of these countries are in awful shape, with way too many of their people living in extreme poverty and war.  We ended our meal with a simple prayer for those people.

I leave you with a couple Sudanese proverbs:

"Empty stomachs have no ears."