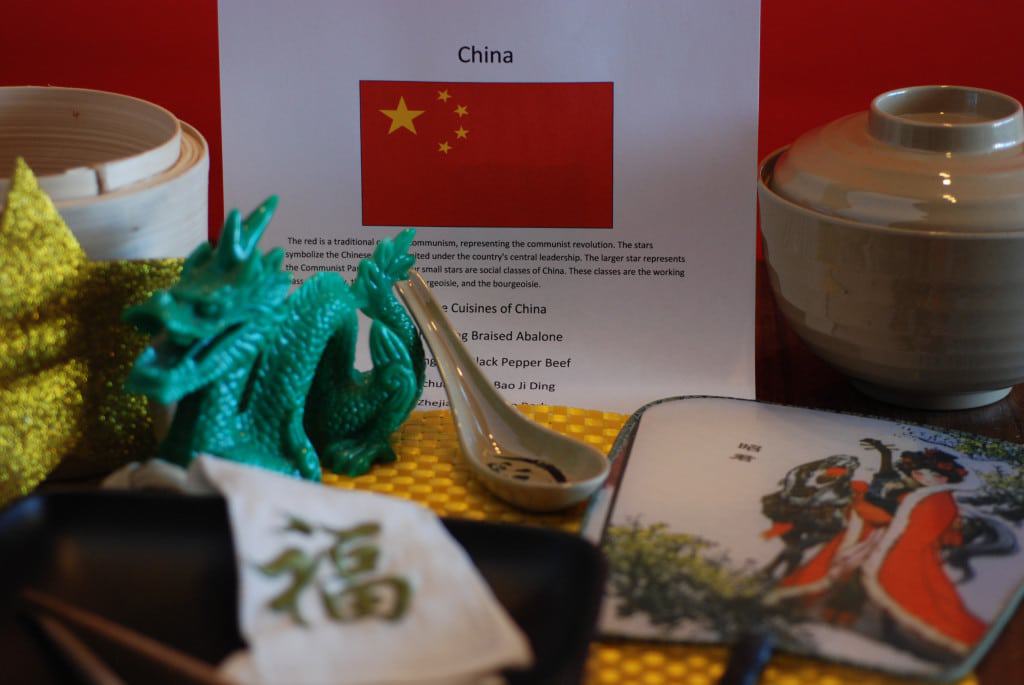 The Chinese people call their country Zhoung Guo, which means the “Middle Kingdom”. Way back when, the Chinese believed the earth was flat and that their country was in the middle of it and so the name stuck. The name China however, came from the early days of Chinese trade, when Persia was the country that sold and traded silks, spices and goods to the rest of the world. It was the King of Qin that united six nations to become one and “Qin” in Chinese is pronounced “Chin.” “Na”, comes from the Persian word “nation.” When asked where the goods came from, the reply was “Nation of Qin”, which created the word China to Westerners.

China is huge in size, coming in second, third or fourth in the world depending on how it is measured. Located in Asia, she has many neighbors, fourteen to be exact. They are: Afghanistan, Bhutan, India, Kazakhstan, Kyrgyzstan, Laos, Mongolia, Myanmar, Nepal, North Korea, Pakistan, Russia, Tajikistan and Vietnam. (Phew!) She is uncontested as number one in the world for being the most populated. The current 2014 estimate is 1,393,783,835, we will just call it 1.4 billion in round numbers and that does not include Taiwan, Hong Kong or Macau. The population has been a hot political issue in China. After rapid growth in the middle of the 20th century, the Chinese government instituted the renowned, ‘one child policy’. They rewarded couples that agreed to have just one child, with cash and better access to housing. The policy has been so successful that the birthrate is down to 1.4 children per woman. Now the experts worry about the imbalances that policy may cause, especially regarding the much larger number of males over females and whether there will be enough young people to provide needed services to the elders.

China’s fascinating history is one of four ancient civilizations dating back more than six millennia, and one of the oldest in the world. Today China is run as a communist state. The Chinese celebrate their Independence Day on October 1st, which marks the foundation of the People’s Republic of China in 1949. China is a unified, multinational country comprising 56 nationalities. The Han make up the majority, at 91 percent of the population. The national religion is officially atheist. They do not keep figures on religion, however, their constitution guarantees freedom of religion. The culture and people have been influenced by many religious movements over the past thousand years. Taoism, Buddhism and Confucianism are considered the country’s “Three Religions”. Islam and Christianity are also practiced by a smaller percentage of the population.

The national language is Putonghua or Mandarin. Many other dialects are spoken and the minority groups have their own cultures and language. The writing system however has not changed for thousands of years, having over six thousand characters. It is extremely complex and difficult to learn unless taught at an early age. The language is written in symbols that represent concepts instead of sounds. There is now a simplified writing system called pinyin, which is the writing of Chinese words in Roman characters.

China has an impressive list of inventions; the compass, paper, gun-powder and printing, to name a few. There are also many symbols of China, but one cannot talk about China without talking about the Great Wall. Like a giant dragon, it wanders up and down across desserts, grasslands and mountains from east to west. At a length of 5500 miles, it is the only man-made object visible from the moon. Work began on the wall in the third century B.C.E. and was continued into the 15th century, during the Ming Dynasty. Many died while building the wall and were buried in it. The Great Wall is a reminder of the suffering the Chinese have endured contrasted by the incredible accomplishments of their civilization. The Great Wall is also one of the ancient Seven Wonders of the World. It is fascinating to think of this and two other engineering projects that were built over 2000 years ago; the Grand Canal (the longest canal in the world at 1115 miles) and the Karez irrigation system, an ingenious series of wells and channels that capture snow melt and transport the water by gravity for irrigation. Aside from these ancient projects, China has numerous other wonders like the 8000 Terra Cotta Warriors that were discovered in 1974 who are said to guard Emperor Qin’s tomb and created around 221 B.C; or the Leshan Buddha which stands over 233 feet high and 90 feet wide; and how about the Forbidden City in Beijing the largest ancient palace in the world to name a few.

China’s topography and climate are quite diverse due to her sheer size, ranging from tropical and sub-tropical valleys in the south to the frigid mountains of the north. Their chief crops are rice, wheat, potatoes, sorghum, tea, millet, barley, cotton and tobacco. She is considered to be the world’s top supplier of teas and grains.
China has huge reserves of coal, iron ore, petroleum, tin and has harnessed hydroelectric power to provide electricity. China has become a major force in the world’s economy with electronics, machinery and apparel as important exports. As China has grown in economic wealth and power, so has her appetite for imports, having many trade partners around the globe. The Peoples currency is called the Renminbi and its unit, the Yuan.

The Panda is an epic, national symbol of China. The panda bear is native to central and southwestern China but is facing extinction due to its loss of habitat. To make things worse, pandas have only a two to three day fertility window, which makes it very difficult to add panda cubs to their sub-critical population. There are several pandas in captivity and on loan to other nations to help with this issue and scientific intervention is becoming increasingly successful in boosting procreation rates. You will find these bamboo eating, adorable creatures proudly displayed on Chinese currency. Gold and silver coins sport the panda’s importance as the national animal.

As I looked into the cuisine of this massive, diverse country, I decided to take a different approach. Instead of coming up with just one meal, I made a dish from each of the eight recognized cuisines in China. Please note that all of these dishes were excellent however, some of them took a few days to make, so be sure to read the directions carefully. With each recipe you will get a little background on that particular Chinese cuisine. The main cuisines reflect the area, local ingredients and distinct method of cooking. Of course, the wok is the first thing that comes to mind when we think of Chinese cuisine. However, it was amazing to learn of all the different techniques that are used there. It was challenging and fun to experience these different cuisines. I hope you will enjoy it as much as we did!

Perhaps you might want to host a Chinese New Year party. Did you know it’s coming up on February 19, 2015? This massive celebration is also called the Spring Festival in China. Most Chinese have eight days off of work for the celebration. It is based on the Chinese lunar calendar and is associated with the Chinese zodiac which has twelve animal signs. Each animal represents a year in a 12 year cycle. This year will be the Year of the Goat. Red envelopes are the most popular gifts for children and seniors, as they always contain money. Red is a very significant color and is worn and used in decorations all over China. The Chinese New Year is a time for family and friends to be together and eat delicious food.

So here we go to the cuisines of China: 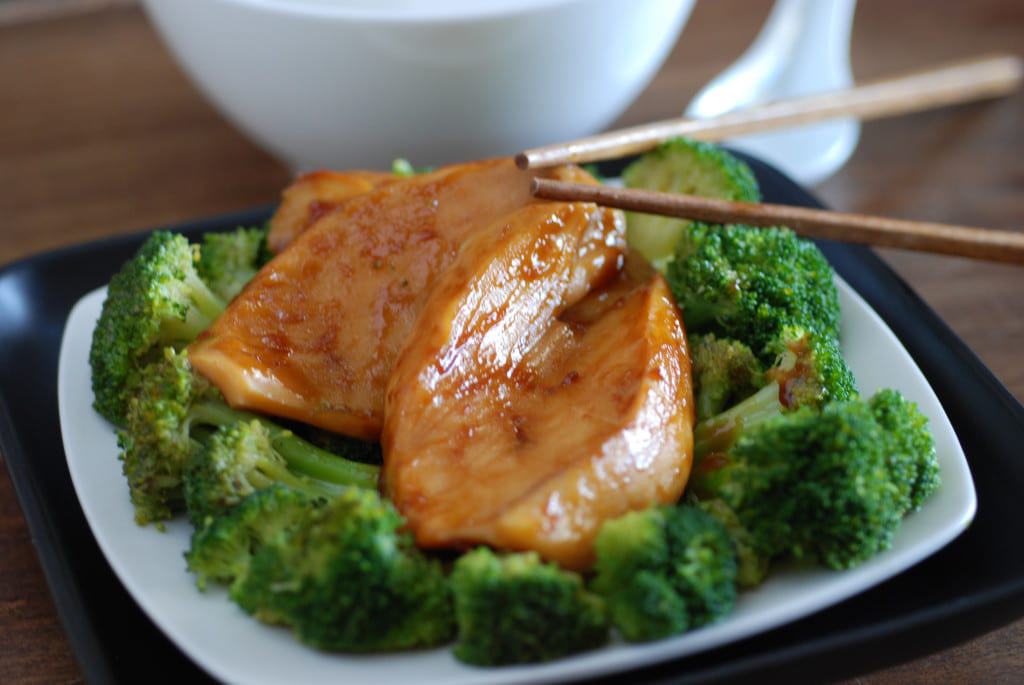 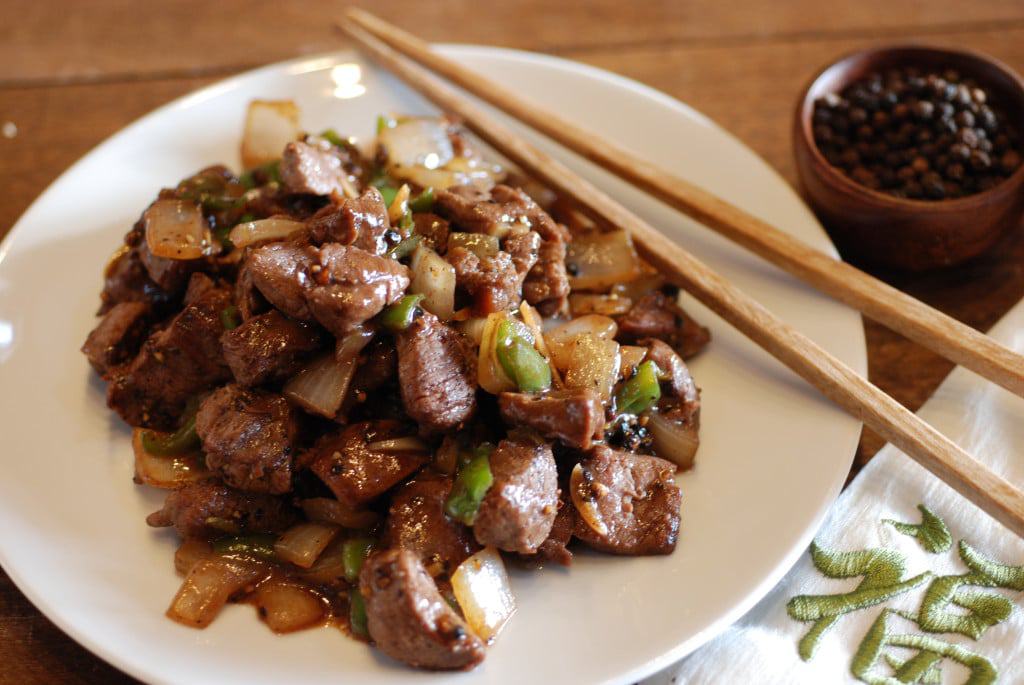 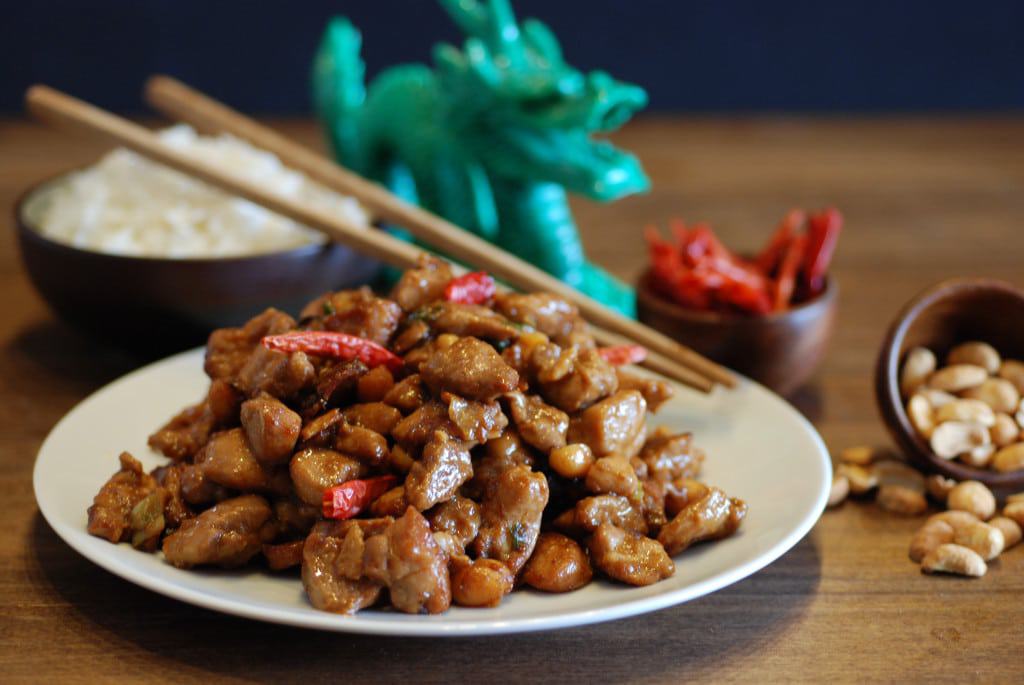 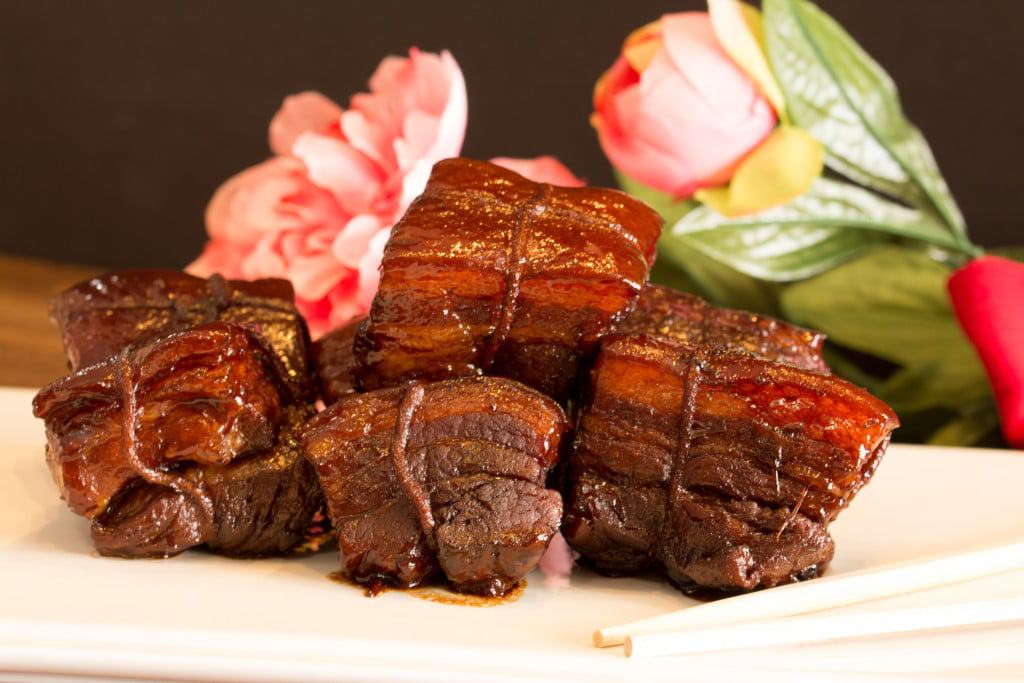 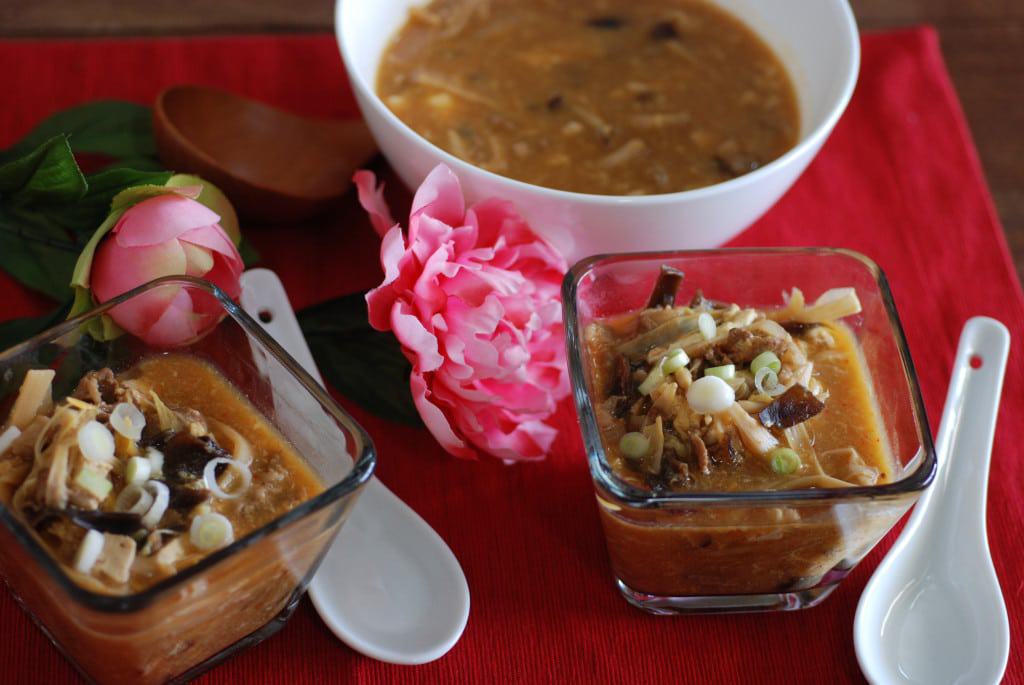 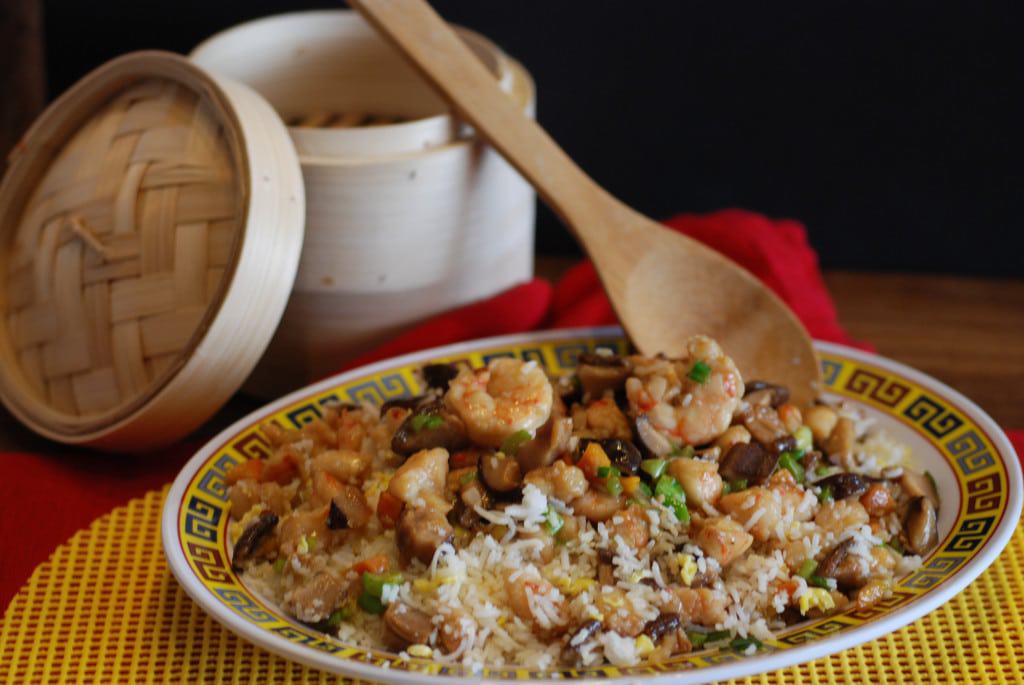 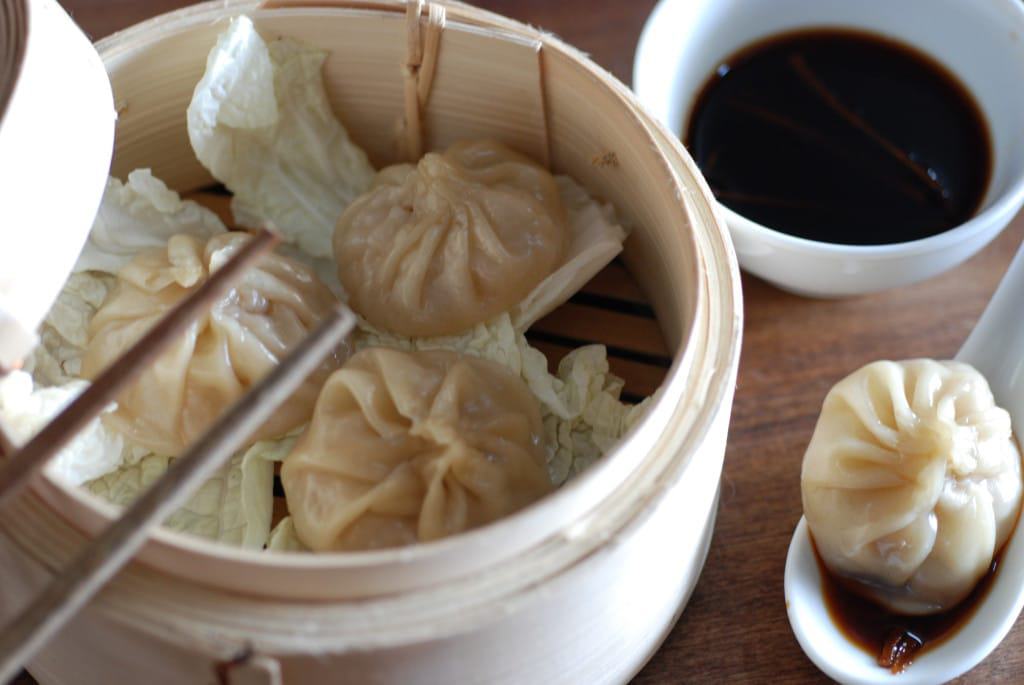 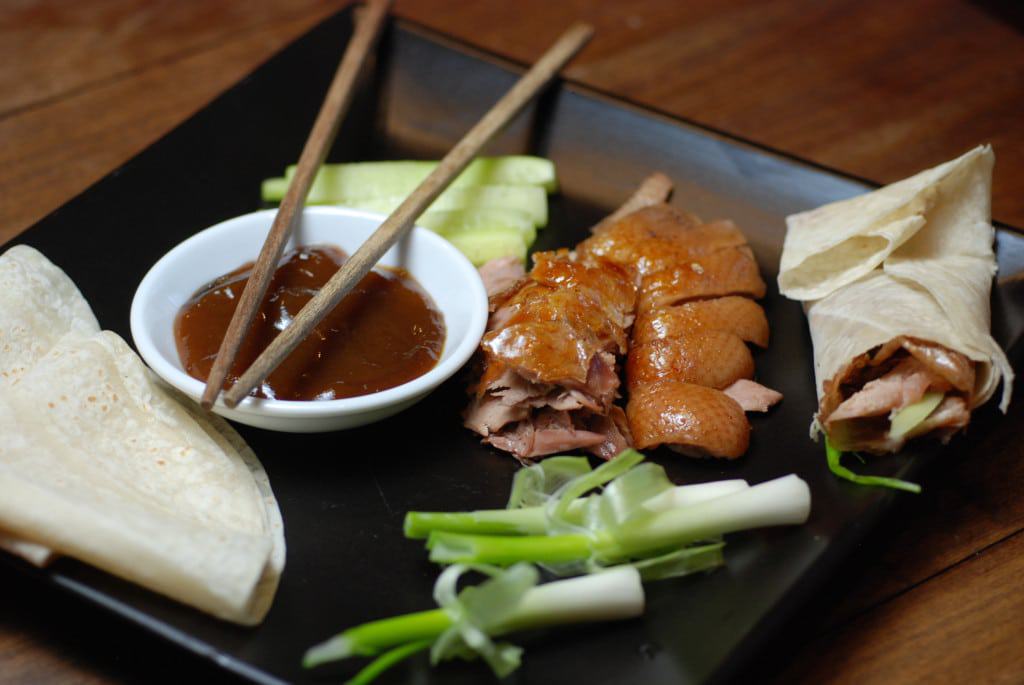 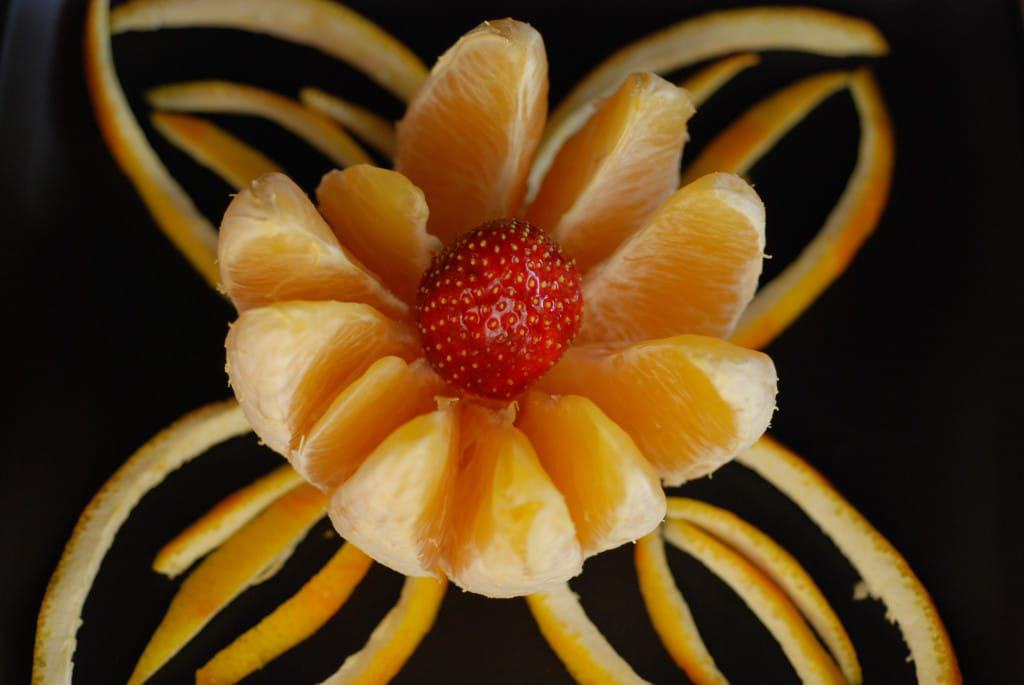 We enjoyed each of these dishes using chopsticks. It is fun to eat with them, even if it takes a little practice. Round tables are common in China and with a lazy Susan; a center, round large platter that turns to easily move the food around the table. Most courses are served all at once. Sometimes you will find communal chopsticks available for serving. Make certain that you do not keep them by mistake. Use them to take a small serving and return them to the dish. Many times there will be chopstick holders next to your place setting. If not, never place your chopsticks upright in the food, this is taboo and symbolizes death. Instead, simply lay them on the plate. Also don’t pick out certain things from the dishes. This is also taboo and considered “grave digging.”

The Chinese people are very friendly. Be polite and always greet elders first and with the utmost respect. Be on time, as punctuality is considered a virtue. A handshake or nod is the most common form of greeting. For a toast, make sure to raise your glass and clink glasses and then say干杯！ Gānbēi! This is the equivalent of “Cheers!” or “Bottoms up!” The words actually mean “Dry Glass”. It's pronounced like “Gun-Bay!” For dessert, you will notice it is not a fortune cookie. It turns out that fortune cookies are an American invention, not a Chinese one. An orange was picked for our dessert, as the Chinese believe they bring good luck.

The Chinese have superstitions regarding numbers. They generally like even numbers, except for the number four. If giving a gift of fruit or flowers, never give four of either. Give six or eight, these numbers are considered very lucky.

As we leave this rich and ancient culture, we do so with a better understanding that the country has seen incredible growth and prosperity. We can only hope that they continue to make strides for the good of their enormous population and the world and will be kind to the environment as they grow.

And you know how I love proverbs. I leave you with a few from the Chinese:
Be not afraid of growing slowly, be afraid only of standing still.

To know the road ahead, ask those coming back.

Until next week,
Warmest regards, Darlene