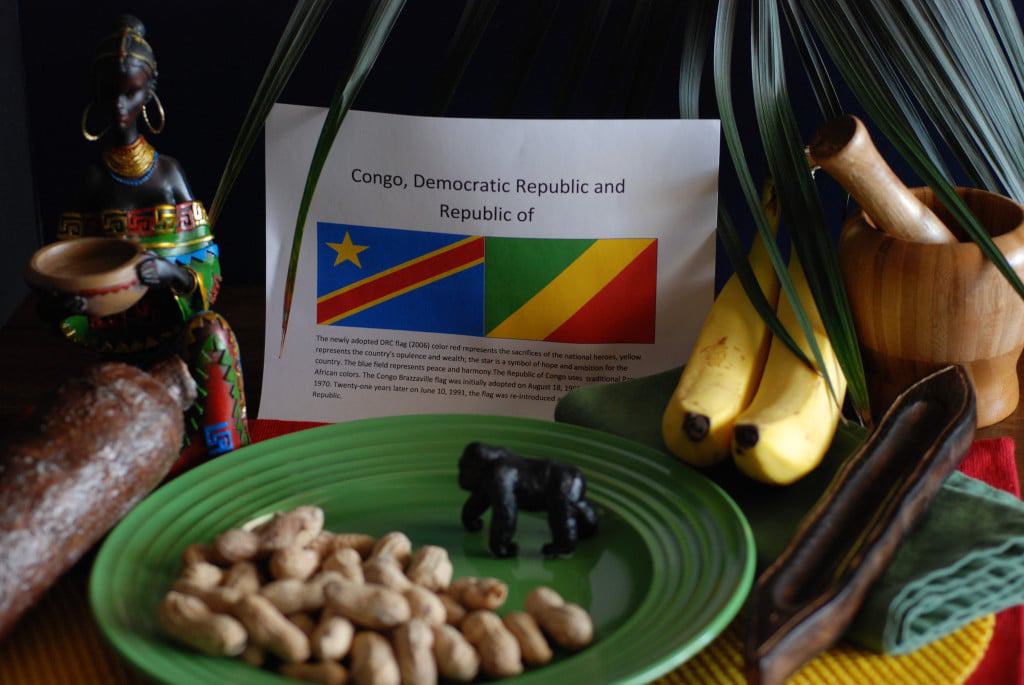 This week we are taking a journey to two countries, the Republic of Congo and the Democratic Republic of Congo. Both are located next to each other with the Congo River separating them and serving as an invaluable natural resource for both. Joseph Conrad’s novel written in 1899, “Heart of Darkness” was about Charles Marlow’s experience as an ivory transporter down the Congo. He had this to say of the river “a mighty big river that you could see on the map, resembling an immense snake uncoiled, with its head in the sea, its body at rest curving afar over a vast country and its tail lost in the depths of the land.”

The Congo River forms the eastern and southern borders of the Republic of Congo with its capital, Brazzaville, on its edge. This is a small country getting its name from one of the great early empires in Central Africa, the Kongo Kingdom. The neighbors are Angola, Cameroon, Central African Republic, Gabon and the Democratic Republic of Congo. A mass rural exodus since the 20th century, has meant that three quarters of the population live in urban areas, making this one of Africa’s most urbanized countries. The Portuguese discovered the Kingdom of Kongo in 1482. They brought with them Christianity and the slave trade. The French colonized this country in 1880 and they gained their Independence from them on August 15, 1960. French is the official language with Lingala and Monokutuba most commonly spoken. They also have a talking drum language that was developed in villages as a form of long distance communication. Specific beats can signify a marriage, a birth or a death has occurred, as well as other important messages.

Ninety seven percent of the people are Bantu. The Bantu includes several different ethnic tribes such as the Kongo, the Teke, the Mbochi and the Sangha. The Pygmies were the first to inhabit the area. Pygmies were considered property by the Bantu tribes and treated as slaves. In 2010 an important human rights law was passed for the promotion and protection of the rights of all indigenous people (including Pygmies.) This law is the first of its kind in Africa, and its adoption is a historic development for indigenous people on the continent.

The Republic of Congo had a Marxist form of government from 1965 to 1990. Since the early 1990’s they have had a multiparty political system. The United States of America has supported the Congolese democratic efforts by contributing aid to the electoral process. However, this did not come easy. There was a bloody civil war in the 1997 that did much destruction to the people and the infrastructure. The current president, Sassou N’Guesso, was re-elected in 2009 for a seven year term and it is hoped they are on a new path to freedom. Just across the mighty river is the capital city of the Democratic Republic of Congo, Kinshasa. The two capitals are closer than any other two countries with the exception of the Vatican City and Rome.

The Democratic Republic of Congo (DRC) is the third largest country in Africa. She shares borders with Sudan, Uganda, Rwanda Burundi, Tanzania, Zambia and Angola. Being a largely landlocked country, the river is heavily used for transportation and livelihood. The Congo River, second only in power to the Amazon, is said to have enough hydroelectric power to light up every home in all of southern Africa. The DRC was formerly known as the Belgian Congo, Congo-Kinshasa, Congo Free State, Congo-Leopoldville and Zaire. The DRC is both large in size and population, with at least 250 ethnic groups living there. French is the official language along with four others, Kikongo, Lingala, Swahili and Tshiluba. The population is estimated to be over 75 million.

Depending on how one may view things today, the DRC is either blessed or cursed with immense natural resources including: copper, niobium, tantalum, diamonds, gold, zinc, silver, tin, timber, uranium, coal and manganese. The DRC got her independence in 1960 and has had trouble ever since in a power struggle over these resources. Several other countries have supported different militias and rebels to gain control over certain areas in the DRC. With new groups forming all the time, it is hard to know who the bad guys are. Some observers call this struggle “Africa’s world war.” It has left the country in a massive humanitarian catastrophe. The United Nations has tried to oversee peace agreements but the region remains volatile, to this day.

The Congo basin is the world’s second largest rain forest after the Amazon, spreading through the Republic of Congo, Cameroon, Central African Republic, Gabon and the Democratic Republic of Congo. It contains over 10,000 plant species, 1000 bird species and 400 species of mammals. Called the second largest “lung of the world”, its survival is crucial to all of humanity. Cancer institutes have identified at least 1400 plants which could potentially be used for fighting cancer. The Congo rainforest is the only place in the world where all three subspecies of gorillas can be found. Unfortunately, it is estimated that two million acres of the forests disappear every year due to logging, mining and agriculture for a growing population. The removal of forests causes greenhouse gas emissions to increase (due to burning, logging and less absorption of CO2 by loss of plant life.) This results in global climate change. Today efforts are being made locally and globally to take better care of our planet’s very important commodity, as it is considered to be one of the most endangered ecosystems in the world.

Subsistence farming is common in both countries. The crops are similar, with cassava being the staple food, the tuber is made into fufu (a starchy porridge) and the leaves (a spinach like-green) eaten as a vegetable. Sweet potatoes, taro, yam, plantains, okra, tomatoes, beans and ground nuts are all common. The typical Congolese meal would include fufu (which we made for our Journey to the Central African Republic) or rice served with cassava leaves and okra. Goat and chicken would be the most commonly eaten meats, however they are expensive and usually reserved for special occasions. Fish are abundant along the Congo River and its tributaries. Quite often they fry the fish or steam it in banana leaves. Women sell smoked or salted fish at the local markets. Bush meat, grasshoppers and caterpillars are also consumed for extra protein.

I choose to combine these two countries since they share the Congo River and both have the same national dish. 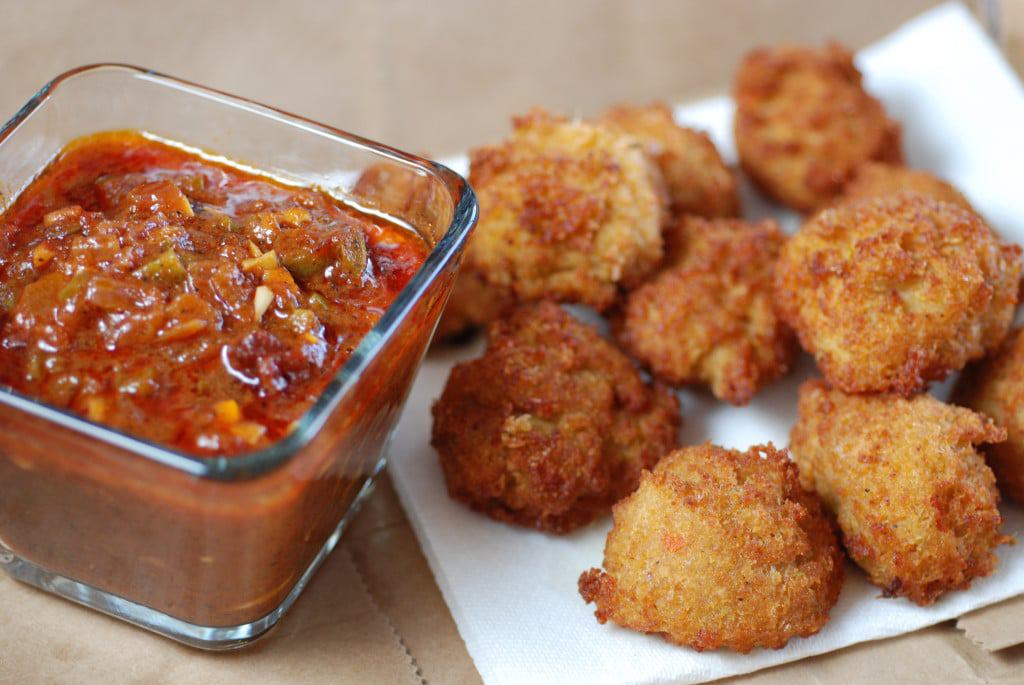 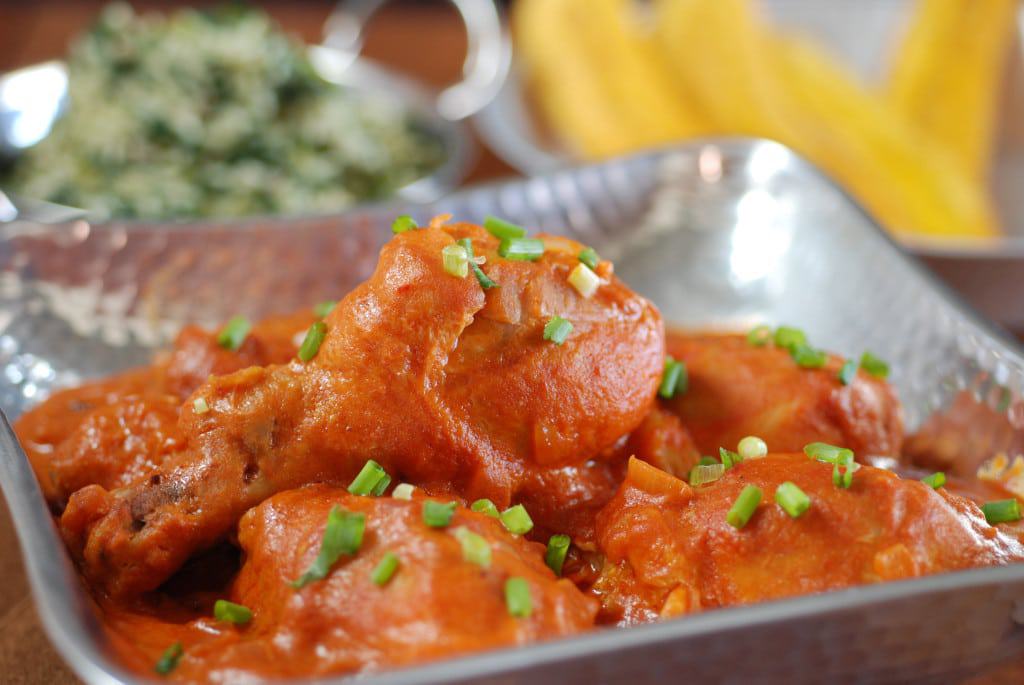 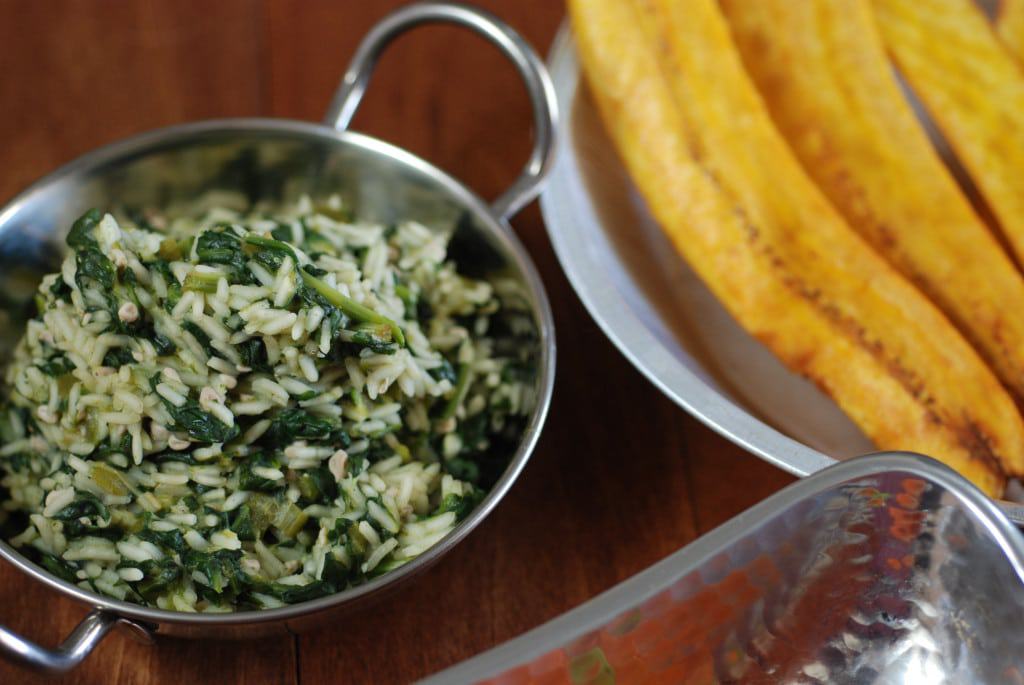 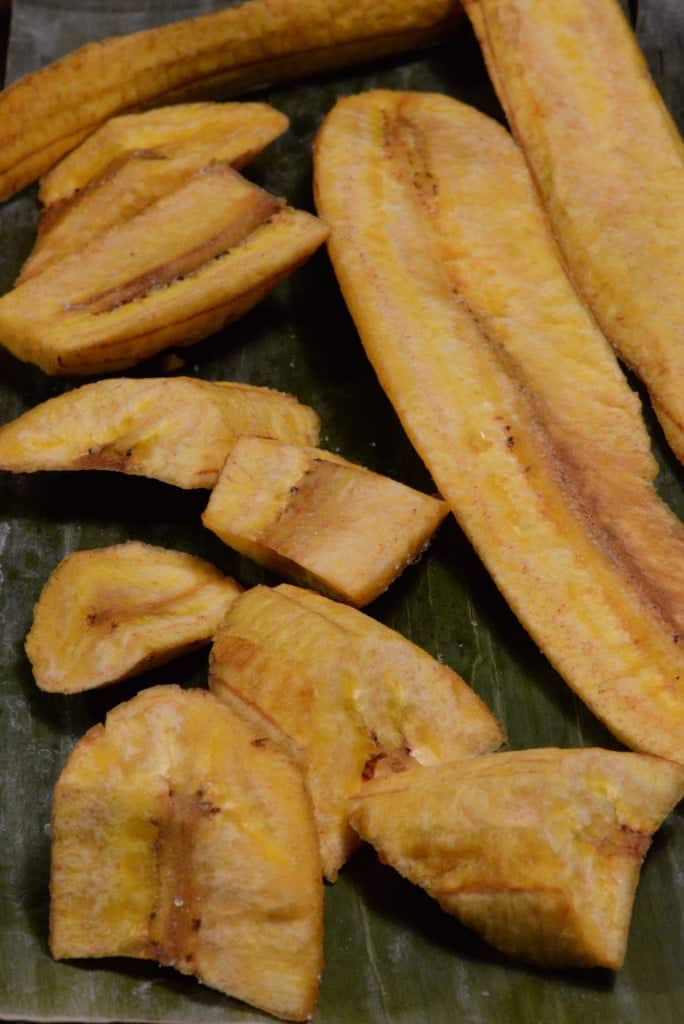 Before we began the meal, we washed our hands by dipping them into a bowl of soapy water and then dried them with a towel. We had decorated the table with the colors of the Congo flags and added palm fronds to give an African ambiance. We ate this meal sitting on the floor, using only our right hand, which is customary there.

The first course, called Akara, is basically a fritter made from beans with added spices and fried. They were delicious as we dipped them into the African sauce that was perfectly spicy. This is a typical street food, found all over both countries.

The main course and sides were served all at the same time with the familiar flavors of Moambe. This is the tomato and peanut combination so popular in western and central African cuisine. We served it with a rice dish that included okra and spinach and a fried plantain on the side. We felt that the meal was a perfect reflection of Congo’s cuisine. There is just something about the banana flavor of the plantain, with the peanut and tomato sauce that is most memorable. No dessert was served for this meal, as it is not their tradition.

As we say goodbye to the Congo nations, I leave you with some music we discovered. (It’s not the Conga line music, made popular in Cuba) This music is created by a group of disabled Congolese street musicians, called Staff Benda Bilili. They became famous after a documentary was made and debuted at the Cannes Film festival. Their story is inspiring and their messages moving. Their soulful harmonies and hypnotic, Congolese, rumba beat made us feel hopeful for their nation’s future. Here is a link to one of their tunes. http://youtu.be/W95yV8uAfW4?list=RDW95yV8uAfW4