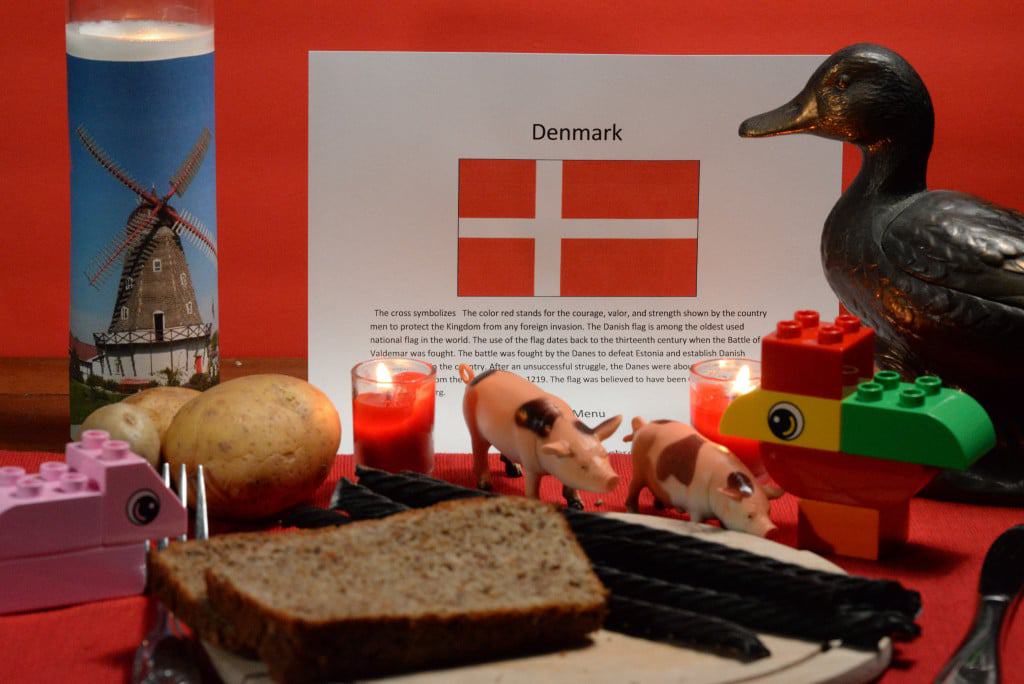 The name Denmark means “Borderlands of the Danes” and it’s known for being the happiest and least corrupt country in the world! The Kingdom of Denmark is a sovereign state, located in Northern Europe, which includes two other countries; Greenland (the largest island in the world) and the Faroe Islands. Denmark is the most southerly of the Nordic countries. She is a peninsula and part an archipelago made up of nearly 400 islands in the Baltic and North Sea, with about 70 that are inhabited. Many of the larger islands are connected by bridges. The only country Denmark borders by land is Germany. Her neighbors just across the sea are Norway and Sweden, to the north.

Denmark is run as a constitutional monarchy and is the oldest kingdom in Europe, having existed for over one thousand years. Copenhagen, the capital, is a robust and romantic city which is home to Queen Margethe II (who is a figure head with no real political power) and to the Parliament, the country’s highest authority. Succession to the throne is hereditary although the law of succession had to be changed for a female to be crowned. Their queen has been the monarch for 43 years.
All Danes, at birth, are considered to be born into the Evangelical Lutheran church and are required to pay taxes to the church as part of their income tax. Although most of the population is part of the church’s membership, only a small percentage of the population are active participants. Freedom of religion is a right in Denmark and numerous other religions are practiced there.

Denmark has an extremely high tax rate, 50 percent, but in return they get free education (including higher education) and free health care. They have generous benefits for the unemployed, plus a full 52 week shared maternity and paternity leave. By the way, the language they speak in Denmark is Danish and it is considered the official language. However, they are taught English in the first grade as a second language and in the fifth grade, they are offered a third language, either French or German. Most will pick German. Higher education is a big deal, especially in Copenhagen. There are almost one hundred thousand university students residing in the capital city.

Denmark is a green energy country. There are more bikes in Denmark than cars and nearly half the population cycles to work and school, which is remarkable since they get on average, 171 days of precipitation. The county is known for its specially engineered cycle paths, which are segregated from vehicular traffic. Denmark is windy, with an average wind speed of 13 miles per hour and they make the most of it. As a pioneer in wind power, their turbines are used worldwide and wind power provides 39 percent of Denmark’s total electricity consumption.

The Danish are also known as being open minded in their views and strongly believe in equality. They were the first country in the world, in 1989, to offer gay couples most of the same legal rights as heterosexual couples, in the form of “registered partnerships.” However, Denmark only recently legalized gay marriage, in 2012.

There is no minimum drinking age is Denmark. Sixteen is the age you must be to buy alcohol and you must be 18 to drink in a bar. Drinking a "pilsner" beer is a favored activity of many Danes after work or when relaxing. Danish pilsners of note are Carlsberg and Tuborg.

The Danish are known to hold privacy as an important core value. They are not ostentatious and consider it rude to look at other’s private property or discuss salaries. In general they don’t show open expressions of feelings, as that is considered to be a sign of weakness and they hate to be interrupted in the middle of a conversation. In a group, you likely will not be introduced but once you are accepted into a Dane’s inner circle you will have the pleasure to experience what they call “hygge”, considered a fundamental aspect of Danish culture. There is not a literal translation in English for the word, but it basically means a “coziness” or “comfort” when relaxing with friends and loved ones. The practice is especially prevalent when it is cold and while eating and drinking in a special ambiance with flickering candles and good conversation. The Danish home is a place to relax and be oneself. It may take some time before you are invited into a Dane’s home, but if you ever are, consider it a great honor.

Denmark is a wealthy nation and has many exports, one being food (they are the fifth largest exporter of food in the world.) Nearly 2/3 of the land is arable and of course, fish are abundant in the surrounding seas. They also export machinery, engines, pharmaceuticals and furniture. The Danish furniture design, developed in the mid-20th century, is often described as functionalistic. They are also known for ship building throughout their many ports. Even toys are a strong export item. The popular building blocks called LEGOs that have sparked children’s imaginations across the globe, were developed in Denmark. The name LEGO comes from two Danish words “leg” and “godt” meaning “play well.”

Looking into the cuisine of Denmark is quite interesting. Not too many years ago, Danish food was synonymous with potatoes and pork. (Not that there is anything wrong with potatoes and pork.) In recent years, there has been a transformation into organics and locally foraged foods. This is called the New Nordic (or Danish) cuisine, thanks to the two pioneers, Rene Redzepit and Claus Meyer. They are the founders and chefs, of what has won the distinction of being, the best restaurant in the world, called Noma. It often requires making a reservation a year in advance to dine there. Although this New Nordic philosophy has changed their cuisine for the good, the Danish just voted on what should be considered the national dish; (what else) pork and potatoes.

Most Danes have three regular meals a day, a cold breakfast usually served with coffee or tea, a cold lunch at work and a hot dinner at home with the family. Breakfast normally consists of bread, cereal and jams. For lunch they have a specialty, called smorrebrod, (which came in second in their national dish contest.) It is an open faced sandwich, served on a dark, sourdough rye bread then topped with almost anything: fish, shrimp, beets, liverwurst, roast beef and pork. They are made beautifully with sauces to complement the toppings and eaten with a knife and fork. Dinner is the time for the family to gather and connect with each other. It is typically served at 6:00 pm. Dinner is considered a hot meal, with pork being the most popular meat served, along with a vegetable and dessert. Confusingly, the evening meal is sometimes called “middag” (midday) because hot meals were traditionally served in the middle of the day. Nowadays, with both parents working and children in school that tradition has changed.

The Danes also love coffee and are huge consumers, coming in fourth in the world. Aside from coffee they love sausages and hot sausage wagons are found all over the country. For a sweet treat they have an obsession with licorice, this “sweet root” perennial herb, which is member of the pea family, is made into a salty, black candy and much loved throughout Denmark. 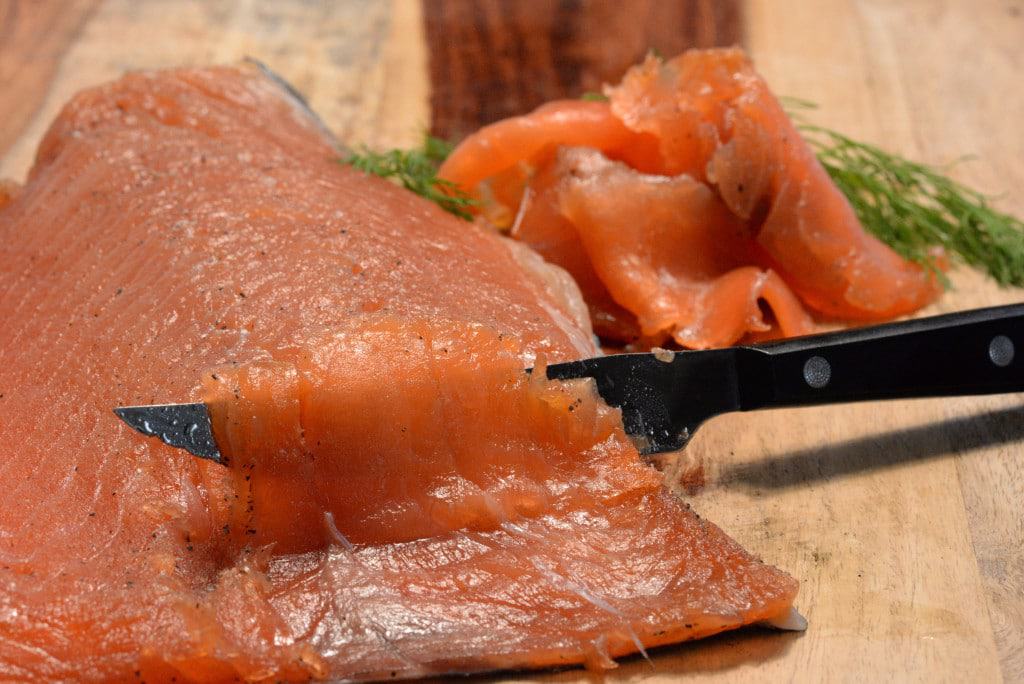 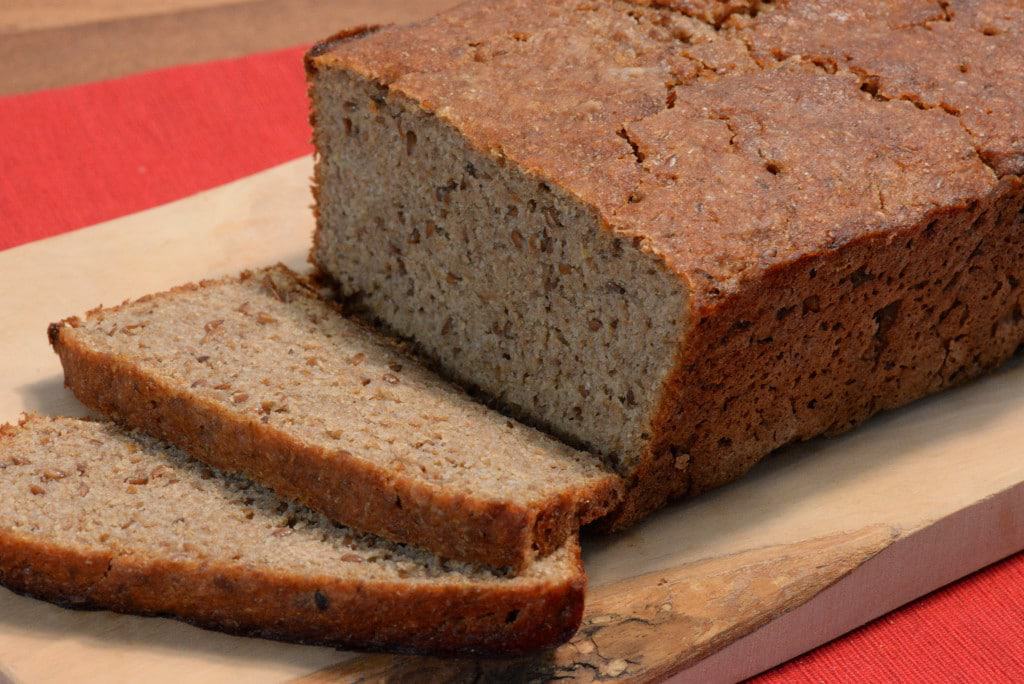 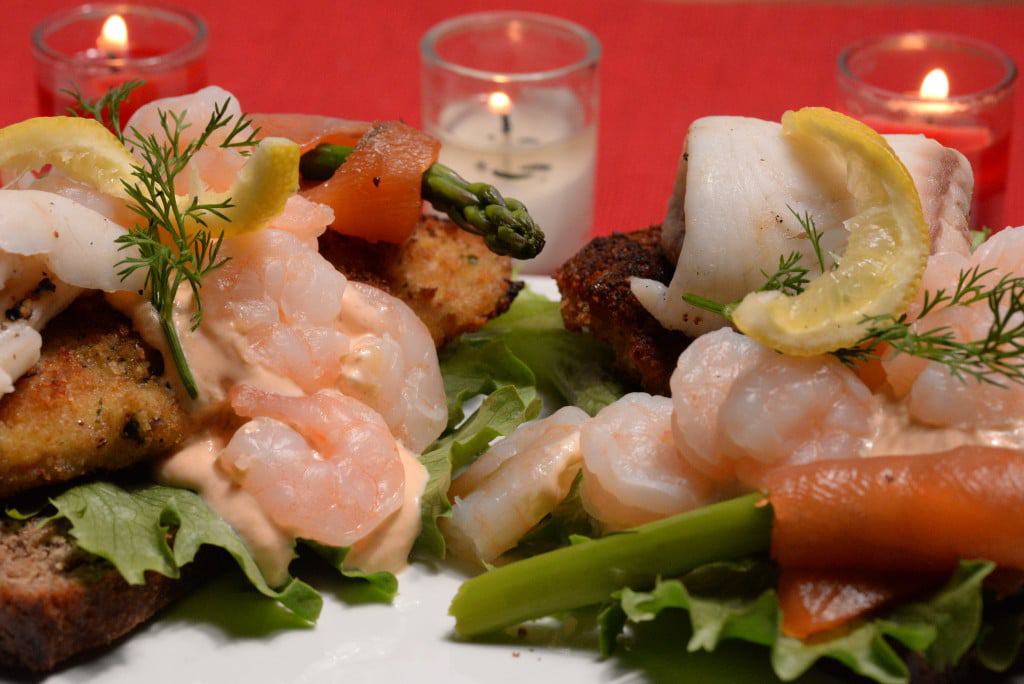 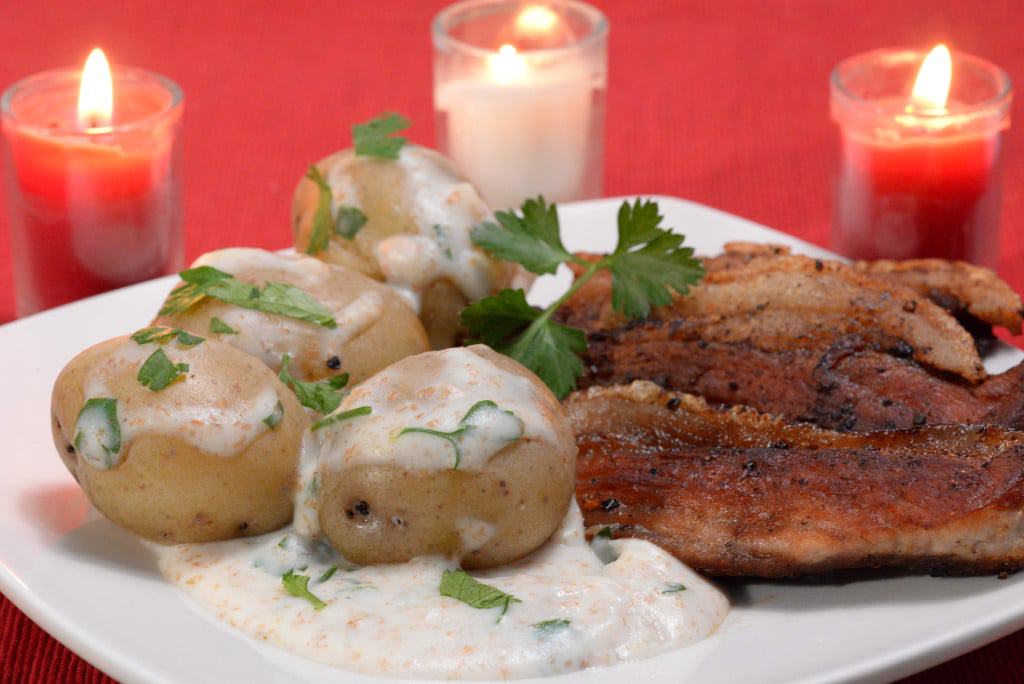 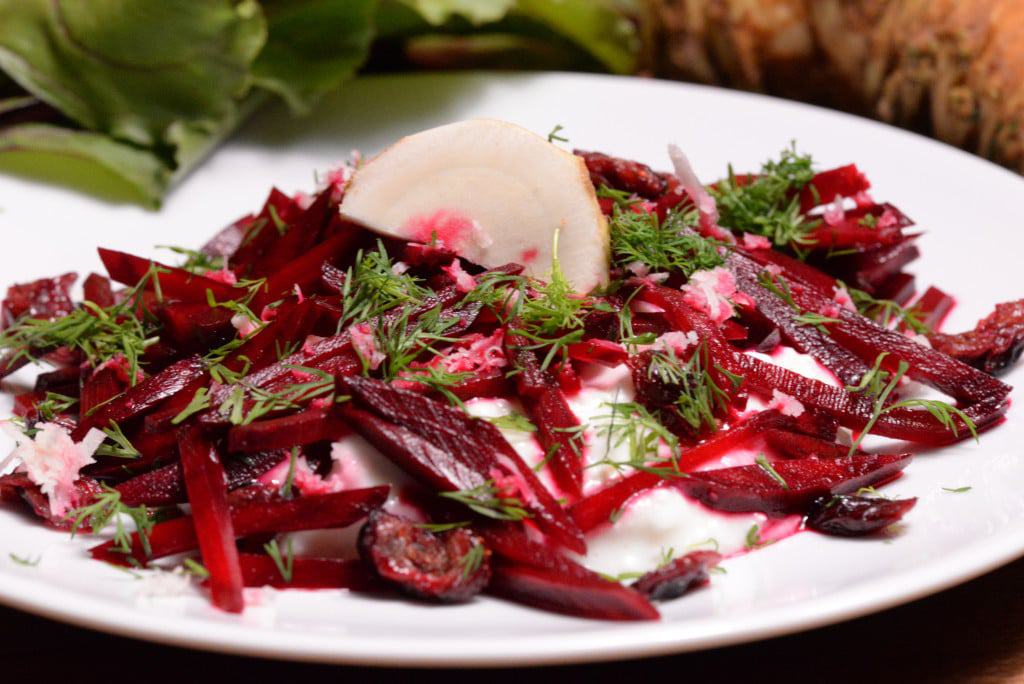 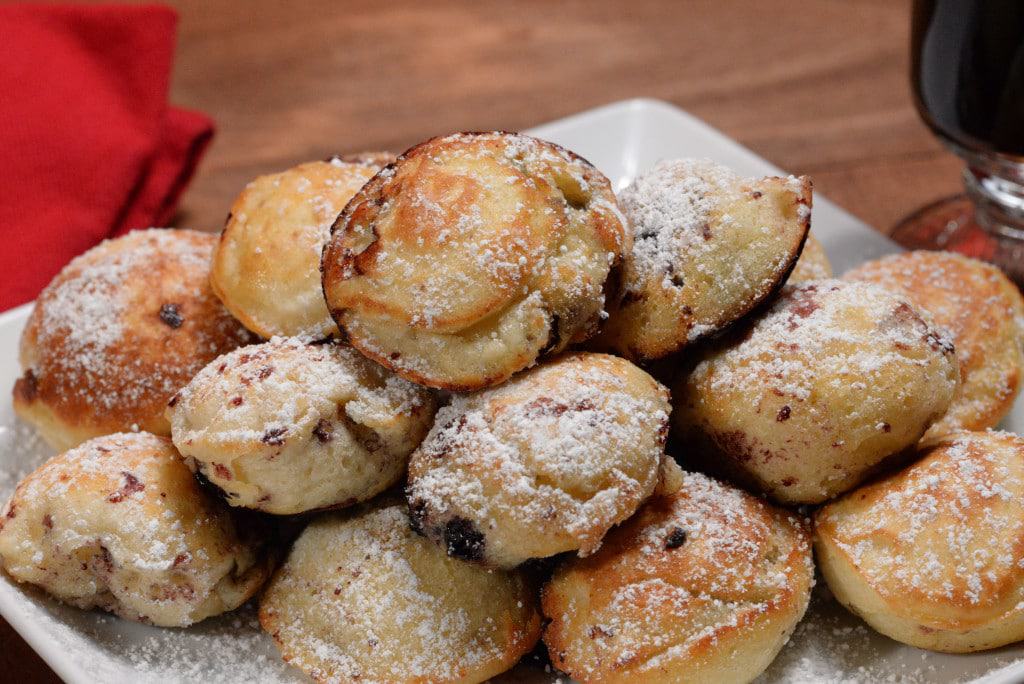 We set the table with the colors of the flag; red and white. In Denmark their flag has a name Danneberg. It is the oldest flag in the world and was adopted in 1219. As legend has it, the flag fell from the sky during a battle and was seen as a gift from God. We decorated the table with Legos, some farm animals, as well as potatoes and other Danish delights. We lit candles so we could create the essence of “hygee.” We began the meal with a toast of Akvavit. This is the Danish version of Schnapps, made from potatoes. We raised our glasses with “Skal”, pronounced “skole”, which means cheers in Danish. Then I said “Vaersgo og spise”, which means, come on and eat.

The appetizer of smorrebrod, called stjerneskud, was outstanding. The rugbrod (Danish rye bread) and gravlax (cured salmon lox) were made from scratch and there is just something special about both of those being homemade. For the stjerneskud, the rugbrod was buttered and a piece of lettuce was added. The dish had a fried filet of sole along with a steamed one, which sat on top of the lettuce. The sauce was a combination of a tarter and cocktail sauce that went very well with the fish. This was a bit heavy for an appetizer, as this would normally be served for lunch, but since it was ranked so high in the Danish national dish contest, we just had to try it. One could of course, make small appetizer-size bites of just gravlax and rugbrod with different sauces and garnishes, which would be perfect.

After a bit of relaxation we had the main course served along with the fresh beetroot salad that was made in honor of the “new Nordic cuisine”. What is not to love about pork belly? It is so flavorful with that crispy skin and with those little new potatoes smothered in creamy parsley sauce, wow! We totally understand how this was voted the favorite national dish. The combination of the fresh beetroot with fresh horseradish and dill was delicious and welcomed as a refreshing side dish.

Next, we needed to go for a bike ride and peddle away those calories. Oh, wait, that would be right after dessert. I was originally going to make a Danish, I mean the Wienerbrod. I thought it was quite humorous that what the rest of the world calls “a Danish”, they call, Vienna Bread. I learned that this flaky, pastry crust actually originated in Austria. (Oh, and the Great Dane dog breed, is actually German.) Although, they have perfected the art of the pastry in Denmark, we enjoyed an original Danish dessert, the Danish pancakes called Aebleskivers with a cup of coffee to complete our lovely meal.

Then we said “Tak tor mad” which means, thanks for food, and we went for that bike ride. We rode to a nearby lake and sat down and read “The Ugly Duckling,” a tale by Denmark’s beloved Hans Christian Anderson. There we pondered if it was the fairy tales or the “hygee” that makes Demark the happiest country in the world. Perhaps both.