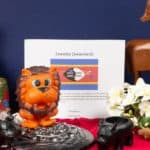 How did eSwatini get its name?

In 2018 Swaziland became known as the Kingdom of eSwatini.  This was a declaration made by King Mswati III on the King’s 50th birthday and in the 50th year of the county’s independence.  Mswati II was an important leader and it is his name from which the Swazis derived their name. Swaziland was an anglicized combination of the name of his people and the word “land.”  Now, according to the King, it is called by the correct name for the people and the language.

Where is eSwatini located?

ESwatini is one of the smallest countries in all of Africa.  It is landlocked, surrounded mostly by South Africa, with one short border with Mozambique. It is only 125 miles (200 Km) from north to south and 80 miles (130 Km) east to west.  ESwatini is mountainous and hilly with some sloping plains.  Despite its small size, it has many protected areas, the largest being the Hlane Royal National Park which is about 50,000 hectares. The park is ideal for game viewing due to its extensive network of roads and the abundance of waterholes. It is home to the “Big 5”  (Lion, rhino, elephant, leopard, and African buffalo.)  It is also known for its abundance of rhinoceros.  ESwatini has two capitals; Mbane is the administrative capital and Lobamba is the royal and legislative capital.

A brief history of eSwatini

Artifacts have been found indicating there was human activity dating back to the early Stone Age. Prehistoric rock art paintings date back to 25,000 BC and up to the 19th century can be found throughout the country.  The present people of the Swazi nation migrated south before the 16th century to what is now Mozambique.  Around 1750 the Swazis settled in northern Zululand..  Unable to match the growing Zulu strength, the Swazis gradually moved northward in the 1800s and established themselves in the area of present day eSwatini.  They maintained their hold there under several leaders.  The most important was Msawti II.

Contact with the British came early in Mswati’s reign when he asked British authorities in South Africa for assistance against Zulu raids.  Eventually, in 1902 after Britain won the Anglo-Boer war, Swaziland became a British Protectorate.  Swaziland became independent from Britain on September 6, 1968.  It was set up as a constitutional monarchy.  Shortly after Independence, King Sobhuza repealed the constitution and eSwatini was run as an absolute monarchy and is today the only one left on the continent.

The culture of the Swazi people involves music, food, religion, architecture and kinship. The people are comprised from various Nguni clans and speak the Nguni language, known as siSwati.  At the national level, the Ngwenyama (the “Lion” or “King”) is considered the head of the nation along with Ndlovakati (the “She-Elephant”, or “Queen Mother”) who is the spiritual leader of the nation.  The national cultural events involve one leader or the other, or both.

Polygamy is common.  It is taboo to ask how many kids or wives the King has, but it is believed the last king, Sobhuzu II, the second longest reigning monarch in the world, reigned from 1921 to 1982. had over 70 wives and 600 children.  The wives and children of the King are royals and are distinguished by being allowed to wear the red feathers of the lourie bird. The main religion is Zionist; a blend of Christianity and indigenous ancestral beliefs.

There are two important festivals in eSwanti, Incwala is held on the fourth day after the full moon nearest the longest day of the year in the Southern hemisphere, December 21.  Incwala translated means, First Fruits ceremony.  The King’s tasting of the new harvest is just one aspect of the Incwala.  If there is no king, there would be no Incwala.  It is considered high treason for any other person to hold an Incwala.

The other festival is the Umhlanga Reed Dance, or fertility festival, typically held in late August or early September.  During the eight-day ceremony, girls cut reeds and present them to the Queen Mother and then dance.  Only childless, unmarried girls can take part.  The purpose is to preserve the girls’ chastity, and to provide tribute labor for the Queen Mother.

The main Swazi social unit is the homestead, a traditional beehive hut, thatched with dry grass.  In a polygamous homestead, each wife has her own hut and yard surrounded by reed fences.  Cattle are a very important part of Swazi culture.  The traditional homestead will have a cattle byre, or kraai.  This central circular area is a symbol of prestige and wealth.  Cattle are raised as lobola or bridewealth.  Bridewealth is the amount paid to the bride’s family at marriage.  Former president of South Africa, Nelson Mandela, received a lobola when his daughter married a Swazi prince. Ten head of cattle is the usual price, but if the bride is a virgin or the daughter of a chief, additional cattle may be requested.

Unfortunately, eSwatini, due to the polygamous society, has the highest rate of HIV/Aids in the world, with an estimated 210,000 people infected of its 1.2 million population.  It also has one of the lowest life expectancies in the world, with an average age of only 57 years.  HIV/Aids is the leading cause of death.  Seven in ten people in eSwatini live in poverty and suffer from widespread malnutrition.

Like many countries, the influence on the cuisine comes from its neighbors.  South Africa, with its Dutch and English influences, as well as the Portuguese influence, from Mozambique cuisine, are both found there.  Because eSwatini is a poor nation, many people survive on subsistence farming.  Some popular foods are grains, called tinhlavu and vegetables, called tibhidvo.  The grains and vegetables are often combined to make a porridge called “Mealies” which is typically made with sorghum or maize. This bland porridge is served alongside meats and stews.  Some of the popular vegetables include pumpkin, green beans, corn, spinach, beets, sweet potatoes and carrots.  Meat dishes, called Inyama, are reserved for special occasions.  Goat meat is largely popular, as is game meat, and chicken.  Braai (BBQ) is also loved in eSwatini, just like in South Africa.

Some other popular dishes are: corn on the cob, roasted or boiled, emasi (sour milk) a fermented milk from cows which is fermented and strained, umncweba and umkhunsu which are dried spiced meats similar to the very popular biltong, sishwala, a thick porridge served with meat or vegetable stew and incwancwa, a sour porridge made with fermented mealie meal.  Pumpkin leaves and ground nuts are cooked to make umdivdo wetintsanga.  Sidvudvu is a porridge made of pumpkin and mixed with mealie meal.  Tjwala is their traditional beer, although many homesteads ferment their own brew.

So let’s enjoy a eSwatini meal: 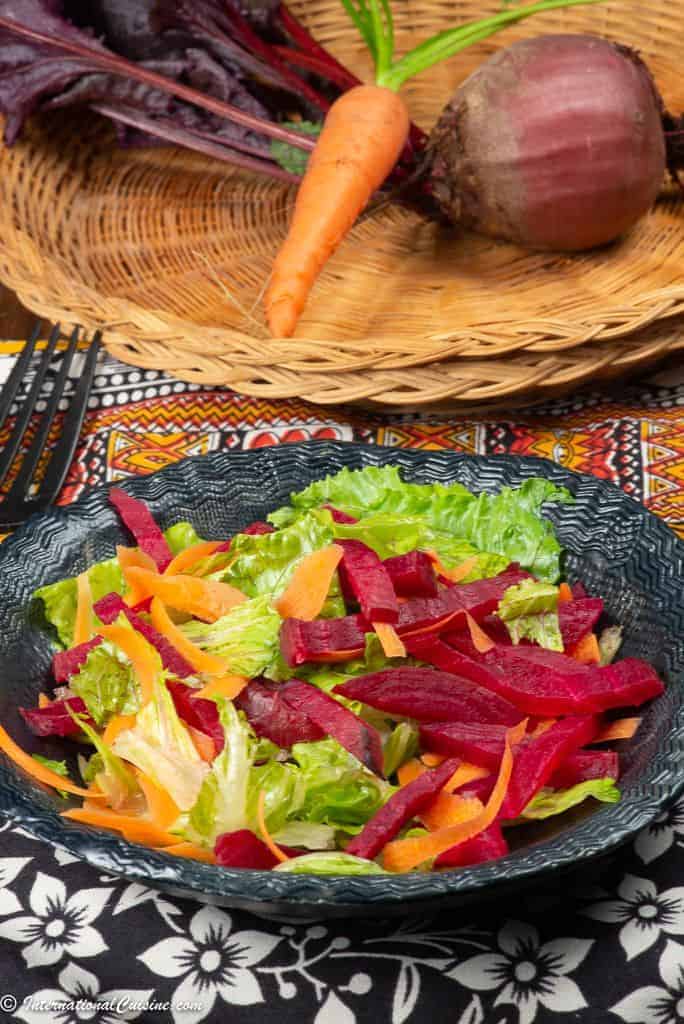 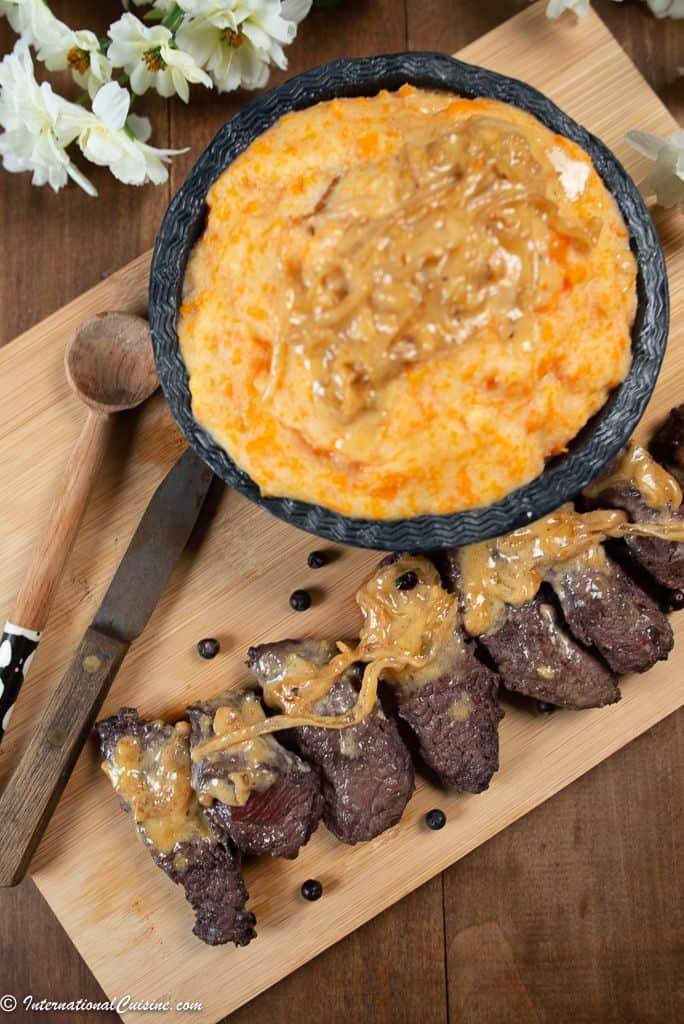 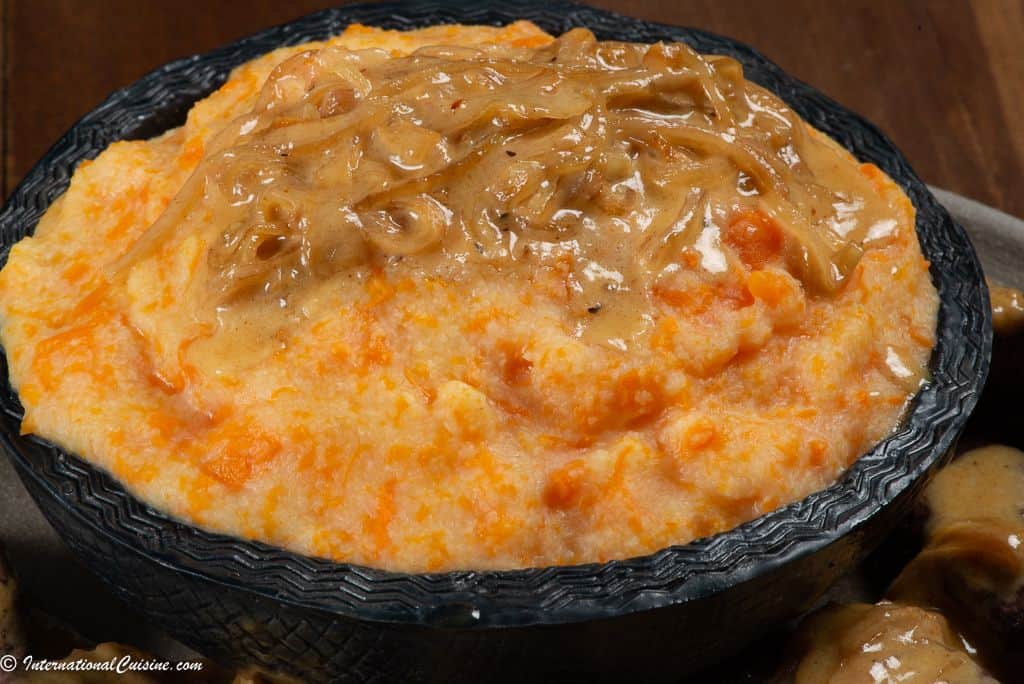 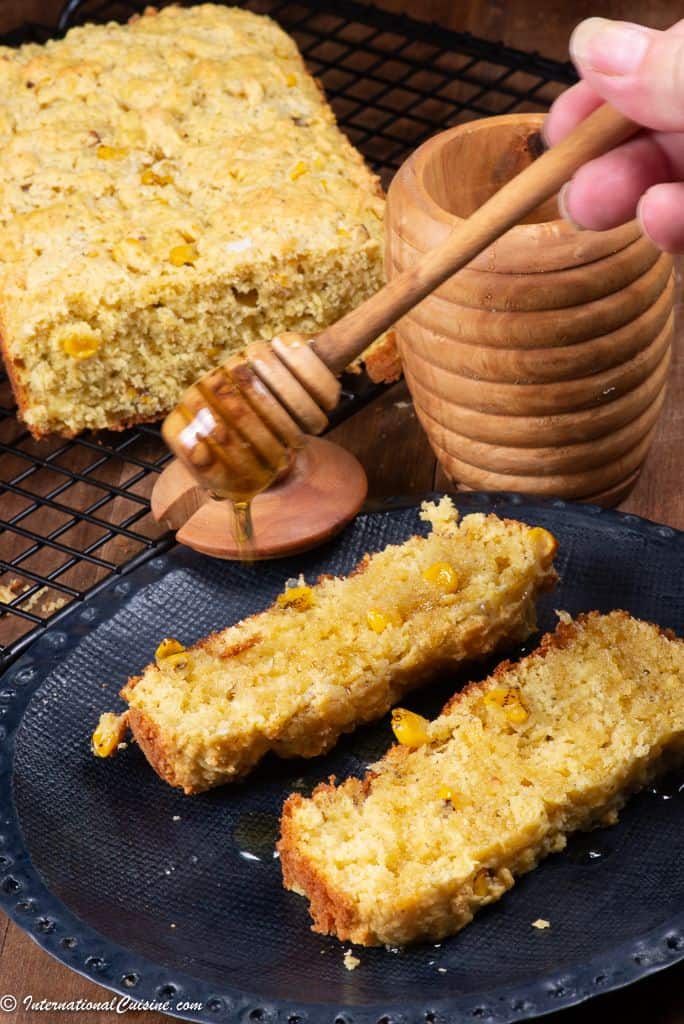 We set the scene with a lion and an elephant statue to represent the King and the Queen Mother.  A rhinoceros statue was placed since the country is known as being a prime place to see the “Big 5” on safari.  A wooden gazelle was added, as it is the national animal of eSwatini.

The first course was a delicious salad.  I used items straight from my garden, as many of the people in eSwatini would do. The slaai, as it is called there, included beets and carrots, along with fresh greens.  It was served with a light and refreshing dressing made with lemon juice and ginger.

For the main course, we thoroughly loved the ostrich steak with the pumpkin pap.  Honestly, I had never tried ostrich before and was pleasantly surprised.  It was not gamey at all and had a lovely beef-like flavor.  Ostrich is very lean and is considered much healthier than beef.  I highly recommend it.  Ostrich is wild in many parts of the country but is farmed as well.  I purchased mine online at American Ostrich Farms.  (Fair warning: it is not inexpensive to purchase, but it is rich, and a little goes a long way.)  It was served with a decadent cream and onion sauce that was superb on both the meat and the pumpkin pap.  The pap was flavorful and a perfect side dish to the rich, ostrich filets.

For dessert, a warm and comforting slice of mealie bread was served, which is very popular in the region.  This mealie bread was made with whole, corn kernels and was served with honey.  All in all, we loved this meal.  It was Kumnandzi (goom-naan-zee) which means “delicious” in SiSwati.

As we say goodbye to this unique, tiny little nation in Africa, I leave you with an eSwatini proverb.

“A person who says it cannot be done should not interrupt the man doing it.”

Be safe out there.