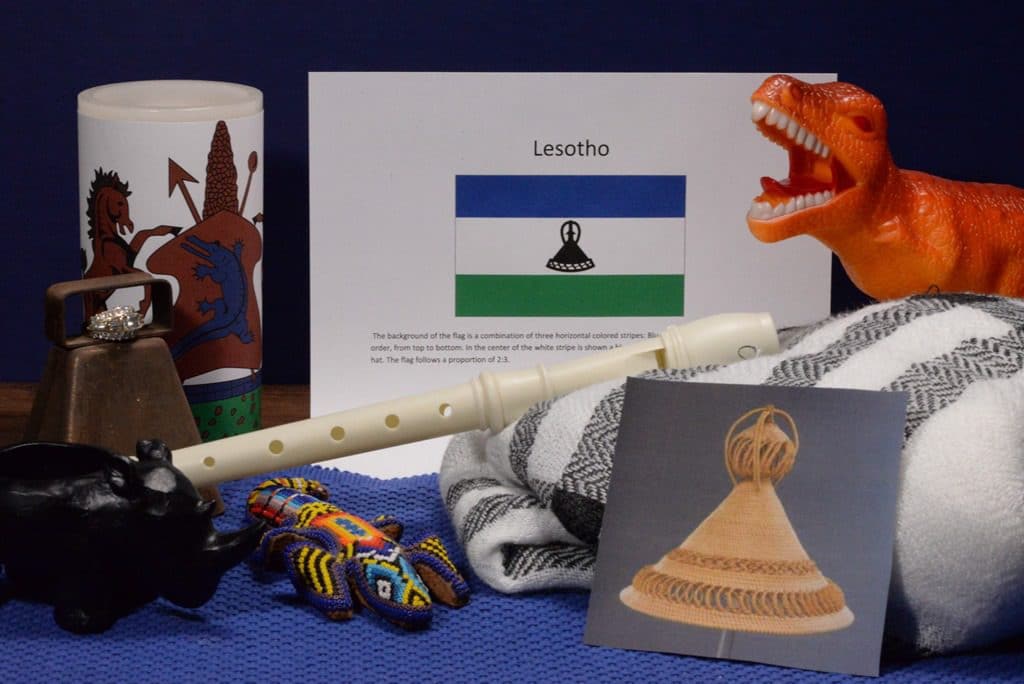 The Land of Lesotho, pronounced Li-soo-too, roughly translates to “The Land of the People who Speak Sesotho”, which is the official language, along with English.  Basotho, is what the people are called and singularly they are known as Mosotho.  The Basotho people make up 98 percent of the population of this small country that is solely surrounded by South Africa.  Countries that are entirely surrounded by another country are called enclaves.  Lesotho is one of three in the world (the others are The Vatican City and San Marino.)

Lesotho is also known as: “The Mountain Kingdom”, “The Kingdom of the Sky”, “The Roof of Africa” and “The Switzerland of Southern Africa.”  These names are due to the high elevation of this nation, along with the stark beauty of its rugged terrain.  Lesotho’s lowest elevation is 4593 feet above sea level.  Eighty percent of the nation is about 5900 feet above sea level.  This makes Lesotho, the country with the highest, lowest elevation in the world.  The lowlands would be highlands anywhere else in Africa.  This beautiful, mountainous enclave is cooler because of the altitude.  In the heat of summer, in the lowlands, the temperature averages about 86 degrees F, in winter, about 19 degrees.  It is much cooler in the highlands.  Snow is common between May and September.  Perhaps this is why a blanket, made of mostly wool, is the national dress of this nation.  Skiing and high altitude marathons, as well as mountain climbing, attract sportsmen and women, from all over the world, to this nation.

Lesotho is one of only three nations in Africa that are a constitutional monarchy, (the other two are Morocco and Swaziland.) The king, Letsie III, is a direct descendant of Moshoeshoe and doesn’t hold any executive powers but performs important ceremonies and rituals.  Moshoeshoe I, became king in 1822, when he united the different clans into one.  At the time, the country was known as Basutoland.  After clashes with the Boers who were trying to claim land rights on the western border, King Moshoeshoe signed a treaty with the British for protection.  It became a British Protectorate in 1868, after ceding the western territories and reducing the kingdom to half its previous size.  Basutoland gained independence from Britain in 1966 and became the Kingdom of Lesotho.  The government, however, faces corruption and problems with military coups and opposition parties prevail.  Many subsequent kings and prime ministers have had to flee into exile on several occasions, over the years.

The Lesotho Highlands Water Project has enabled Lesotho to be completely self-sufficient in producing electricity.  Water from the Orange River is captured, stored and transferred to surrounding countries.  By selling water and energy to other South African nations, Lesotho has greatly improved its economy.  Aside from water and power, diamonds are another natural resource, which is a very important export.  It is however, agriculture and livestock that contribute to nearly half of the nation’s income.  Drought can greatly affect the agriculture revenue, which has been difficult in recent years.  Garment manufacturing is another important sector that has helped to lift many of the Besotho people out of poverty.  Thanks to the African Growth Opportunity Act (AGOA), many large U.S. companies have their garments manufactured in Lesotho.  Check the label on your Levis and you just might find it says, “Made in Lesotho.”  The government also relies heavily on funds obtained by miners employed in South Africa as well as from customs duties.  The official currency is the Loti, which is pegged to the South African rand.

Lesotho faces many issues due to unemployment and poverty.  However, its biggest challenge is AIDS/HIV.  They have second highest prevalence of HIV after Swaziland.  Women and children are disproportionately affected.  Lesotho, like many South African countries, has a highly imbedded, patriarchal society, which promotes gender based violence.  Studies have found that large proportions of both men and women, do not believe women have the right to refuse sex with a partner.  These beliefs greatly impact the AIDS problem as it limits women’s power, and increases vulnerability to sexual violence and HIV.  Crippling poverty, HIV and AIDS greatly influence the country’s low life expectancy, of just 49 years.  There are an estimated 150,000 orphans due to HIV/AIDS crisis.  Prince Henry has made visits to orphanages in Lesotho to help bring awareness to this problem.  Although strides have been made by organizations and the government to educate the population, they have a difficult road ahead to get this epidemic under control.

Transportation to villages is achieved by horseback, trekking or light aircraft.  Although some roads have been built for mining, the lack of infrastructure, contributes to the problem of getting the population educated.  Despite this, Lesotho does have a pretty good literacy rate, where 85 percent of the population over the age of 14 is literate.  Although education is not compulsory, the government contributes 12 percent of its GDP toward education and is slowly implementing a program for free primary education.  Healthcare and vital services, however, are still a struggle.  Access to the internet is only available to about four percent of the population.

Despite the many trials this nation faces, the people are known to be extremely friendly and hospitable.  They have a festival each year that is put on by the government and the royal family, called the Morija Arts and Cultural Festival.  It lasts for five days and the theme is “Unify in Diversity.”  The festival features drama, poetry, traditional dance, art and music.   Traditional instruments are the lekolulo, a kind of flute used by herding boys, and the stringed thomo, that woman play.  The festival, of course, also features their cuisine.

As we look into the cuisine of Lesotho, it is influenced by African and British traditions.  The main ingredients are, rice and vegetables (particularly potatoes), wild game, seafood, and fresh fruits.  The national dish is called Pap-pap, made from cornmeal, similar to a polenta.   Stews are common and often made with peanuts.  Basotho cuisine includes many sauces but is generally not as spicy as food from other African countries.  Meat is considered a luxury, however, oxtail stew, beef and chicken, are consumed on special occasions.

So let’s enjoy a Basotho Meal: 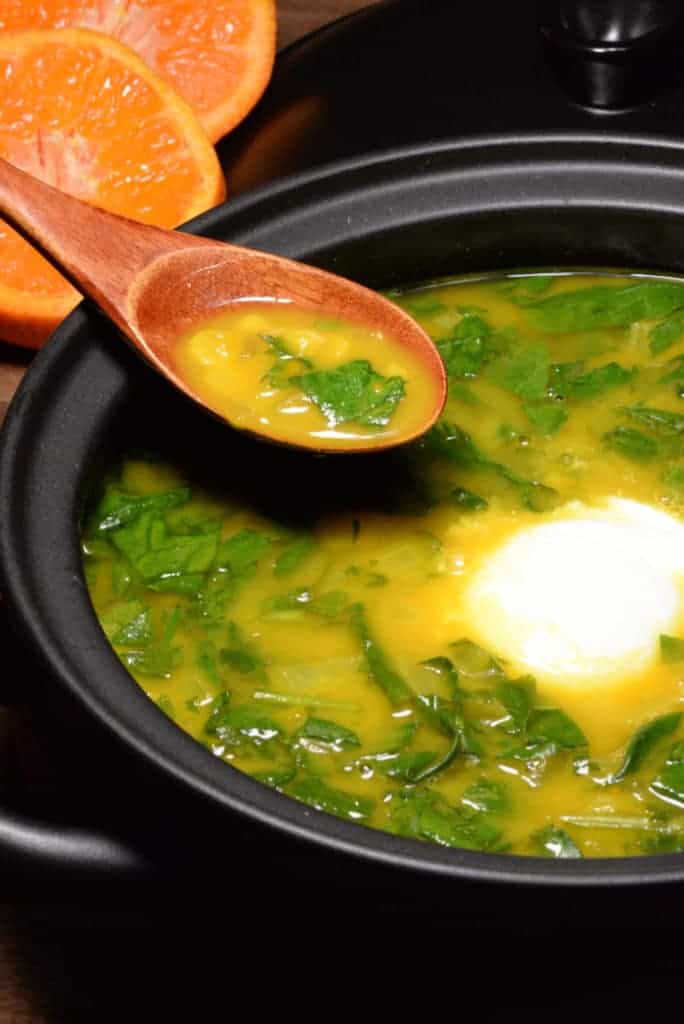 We set the table with the colors of the Lesotho flag; blue, (for rain), white (for peace) and green (for abundance.)  We also included a picture of the conical hat worn there, called the mokorotio, with its distinctive topknot, which depicts a mountain-top that is visible from the fortress and tomb of King Moshoeshoe.  Also the table was set with a blanket, to represent their national dress and a black rhinoceros figurine, since it is Lesotho’s national animal.  Finally we added a dinosaur, as Lesotho is home to the largest concentration of dinosaur footprints in the world.  A dinosaur specie was actually named Lesothasaurus, after unknown dinosaur fossils were discovered in 1978.  This lizard-type dinosaur is believed to have died out in the mid-Jurassic period, yet there are many sites throughout Lesotho, where its giant footprints can still be seen.

We began our meal with a unique soup, called Butha-Buthe.  (I was a bit skeptical of the recipe when making it but then was pleasantly surprised at the delicious result.)  This is a nutritious soup with a lovely balance of flavors that is both sweet and sour.  Spinach and tangerines, also known as mandarins, are the stars of the soup, but it also contains onion, yellow split peas, parsley, cilantro and turmeric.  It is served with a dollop of yogurt on top.  This is a definite keeper!

For our main course we had a lovely, tender, bashed beef that was cooked in water with onions and beef stock cubes.  It was cooked until the meat was falling off the bone and then pounded or bashed (hence the name), to resemble a minced beef.  This was surrounded by a spinach, (which in Lesotho, their wild spinach is called morongo), along with boiled potatoes.  A little peanut butter was also added to the sauce.  This dish would likely be served only for a special occasion, perhaps when an animal was slaughtered.

This dish was served with a vegetarian delight, called chakalaka.  (I wanted to make it because it is fun to say the name.)  This tomato based sauce, with carrots, bell peppers, onion and hot chilies, was delightful.  It was served alongside the national dish, called Pap-pap, which is a cornmeal porridge, similar to a polenta.  This dish would be a more typical meal for the Basotho.  We loved it and will certainly keep this in mind for meatless Mondays!

For dessert, we had one of my favorite things; they call it makoenva, I call it fried dough.  It is described as a cinnamon roll because there are raisins in the dough and once the cooked dough is pulled out of the hot fryer, it is dipped in cinnamon and sugar.  Makoenva was a lovely way to end our Basotho meal, along with a cup of rooibos tea, also known as red tea, which according to WebMD, has 50 times more antioxidants than green tea.  Thanks Lesotho!

As we say goodbye to this unique country called Lesotho, I leave you with a few of their proverbs:

If the palm of your hand itches, it signifies the coming of great luck.

Do not laugh at the snake because it walks on its belly.

A farmer who doesn’t work in the rain or under the sun has nothing to harvest at the end of the year.