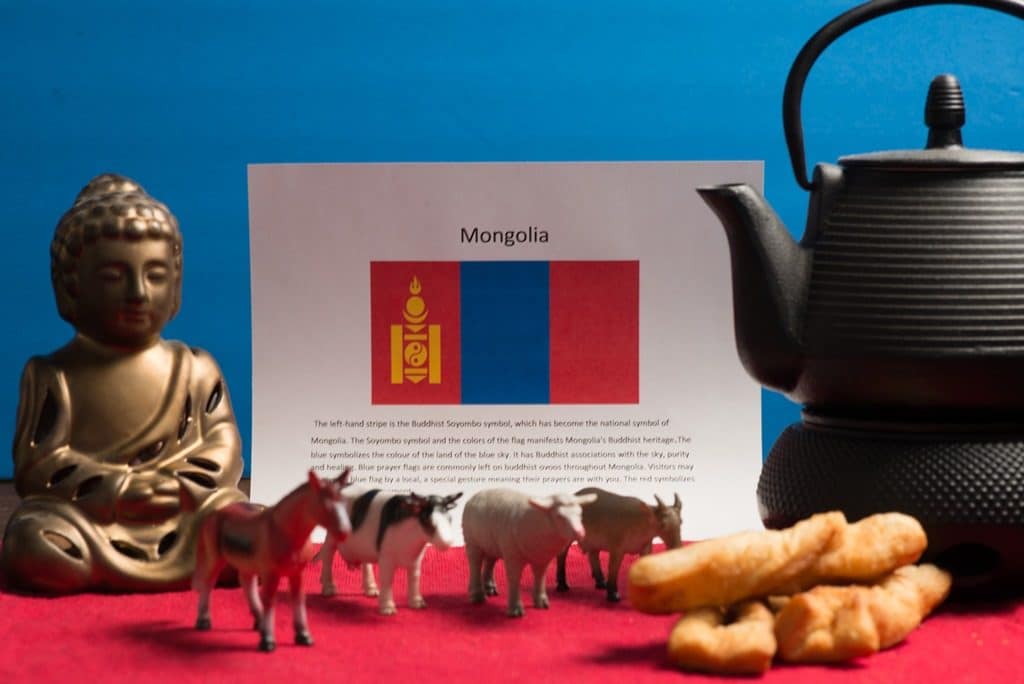 Mongolia means, “Land of the Mongols.”  Mongol is said to come from the word mong, meaning “brave.” Mongolia is also known as, “The Land of the Eternal Blue Sky”, as it has over 260 sunny days a year.  Located deep within Asia, it is sandwiched between Russia to the north and China to the south.  It does not share a border with Kazakhstan but she is a very close neighbor to the west.  Mongolia is the second largest, landlocked country, after Kazakhstan and the 19th largest country in the world.  Mongolia is far removed from any ocean and has the distinction of being the most sparsely populated country, with only four people per square mile.

The topography of Mongolia is quite varied.  The north and west are mountainous and covered with meadows, steppes and forests.  The grasses provide pastures, perfect for Mongolians’ nomadic, lifestyle as herdsmen.  Mongolia is also one of the highest countries in the world, with an average elevation of 5184 feet.  Mongolia is one of the few places on earth where the population still lives a traditional lifestyle, almost untouched over the centuries.  Nearly 40 percent of the people are still nomadic and live in gers (yurts).  The country has a large network of lakes, streams and rivers, located mainly in the north.  The most famous lake is called, Lake Khovsgol.  It is filled with crystal clear, deep blue, fresh water.  Imagine the majestic scene, created by this lake, surrounded by alpine forests and snow covered mountains.  The country is truly a nature lover’s paradise.

The south is home to the famous Gobi Desert, considered the cradle of human evolution.  It is the largest desert in all of Asia and fifth largest in the world.  This area is even more sparsely populated than the north.  Here stockbreeders, of the very rare, wild Bactrian (two hump) camel, live along with goats and sheep that have adapted to scarce vegetation.  Paleontologists have found an abundance of dinosaur fossils in this desert, including nests of dinosaur eggs and yet still many fossils lie undiscovered for millennia, just as they were.  It is also believed that Mongolian horseman, riding through the Gobi, could be responsible for the invention of ice cream.  They would take provisions of cream, contained in animal intestines, as they traveled on long journeys across the desert, in the cold of winter and, it would freeze; the result, ice cream.

Mongolia is known for its blue skies and sunny days.  However, that does not always translate into warm temperatures.  Their climate is extreme.  The country is hot in the summer but actually very cold in the winter, plummeting to -30 degrees Celsius (-22 F.)  The capital city, Ulaanbaatar, is the world’s coldest capital, with an average temperature of -1 degree Celsius (30 F.) The traditional, Mongolian home, known as a ger, is a round tent-like structure that remains surprisingly warm inside, when the stove is lit.

The capital city, Ulaanbaatar, was founded in 1639 as a movable monastery.  It actually changed locations 28 times before it was permanently established at its present location.  Today, the capital city is home to over one million people.  The main religion is Lamaism, also known as the Yellow sect of Tibetan Buddhism.  A Mongolian ruler, Altan Kahn, introduced Lamaism to the masses in the 16th century and also was the first to assign the title of “Dalai Lama”, to Tibet’s religious leader.

What we know today as Mongolia, is actually the historic Outer Mongolia.  Inner Mongolia remains an autonomous region of China.  Mongolia has a rich and intriguing history.  In fact, the Great Wall of China was built along Inner Mongolia, in the sixth century, to keep the Mongols out, along with others.  One of Mongolia’s greatest leaders was Genghis Khan.  He was born in 1162 AD near the mountain Burkhan Kaldun; not far from the current capital, Ulaanbaatar.  His name originally was Temujin, and at the young age of twenty he emerged to become the leader of the Borjigin Mongol clan.  After twenty years of internal fighting, he was able to unite most of the Mongol clans.  In 1206 he was named Gheghis Kahn meaning “Universal King.”  The Mongol Empire existed during the 13th and 14th centuries and grew rapidly under his leadership.  His rule and that of his dependents, resulted in the largest contiguous land empire in history.  At its peak, it stretched from Asia to Europe.  It may not be surprising then, that an estimated 17 million males in Central Asia are believed to be descendants of Genghis Kahn, carrying a variant ‘Y’ chromosome mutation in their DNA that geneticists have traced back to the 13th century.  In 2011 Time Magazine voted Genghis Kahn as one of the “25 Most Important Political Icons of All Time.”

Although Genghis Kahn was illiterate, (who had time to study) he introduced writing to Mongolia, borrowing the script of the Uyghurs (an ethnic group from Turkey.)  Today they use the Cyrillic alphabet, adding two additional letters to represent the ‘o’ and ‘u’ sounds.  The official language is Mongolian, but Russian and Turkic are also spoken. The Mongolians are given credit for the first Pony Express delivery.  About 1000 years ago, correspondence was carried by horse, with special delivery being denoted by an attached feather.  The Mongolian horse post became a special state service named ortoo, which remained in operation until 1949.

The most popular sport is bokh, or wrestling and the most important tournament is held on Mongolia’s Independence Day.   It is estimated that this wrestling tradition dates back hundreds of years, perhaps further than recorded history.  Every July, they hold the Naadam Festival, where three games for men are celebrated: archery, wrestling and horse racing.  Mongolia’s native horses are called takhi, which means “spirit.”  They actually have two more chromosomes than the average horse.  On the brink of extinction, they are the last truly wild horses left on the planet.

As we look into the cuisine of Mongolia, know that it has nothing to do with what you may have had as Mongolian BBQ in the USA.  That is actually an invention of the Taiwanese.  The cuisine of Mongolia is very similar to its neighbor’s, Kazakhstan.  Meat, dairy and things made with flour, are their staples.  Vegetables are very hard to come by.  The meat is mostly mutton but could also be horse, camel, beef or yak.  Horses are not given names and are milked and consumed.  Sheep out number people by some 35 to one and horses 13 to one.  Sheep eyes are considered a delicacy and if offered to you, you should eat both, for good luck.  The national drink of Mongolia is called airag and is made of fermented mare’s milk.  Other places in Central Asia call it kumiss.  The national dish is buuz, which will be our starter.  This dumpling is typically made with beef or mutton.

So let’s enjoy a Mongolian Meal: 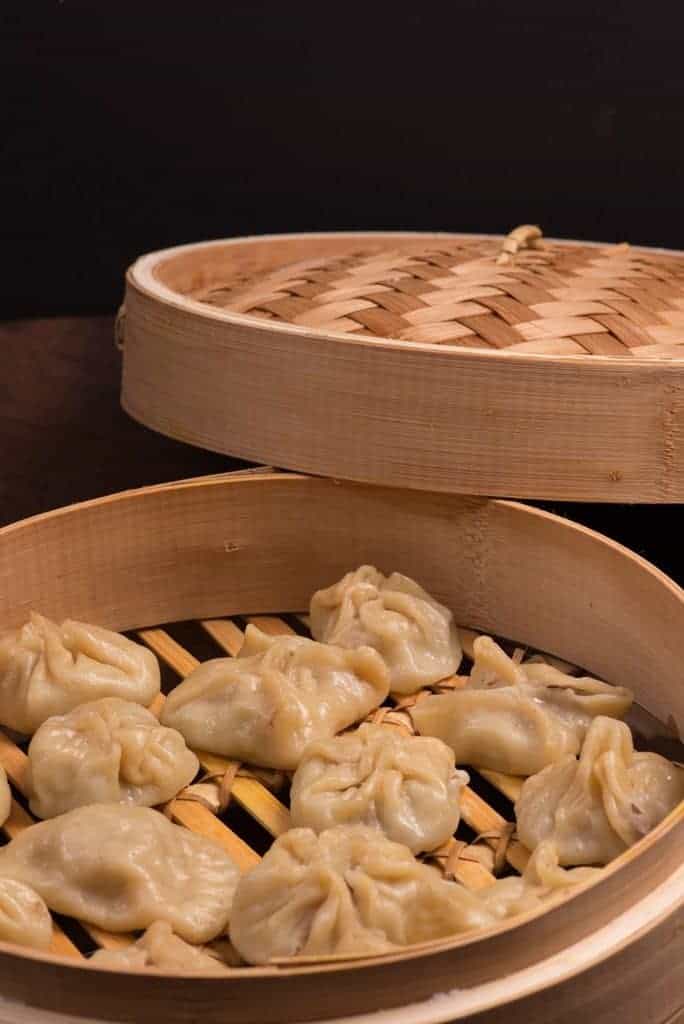 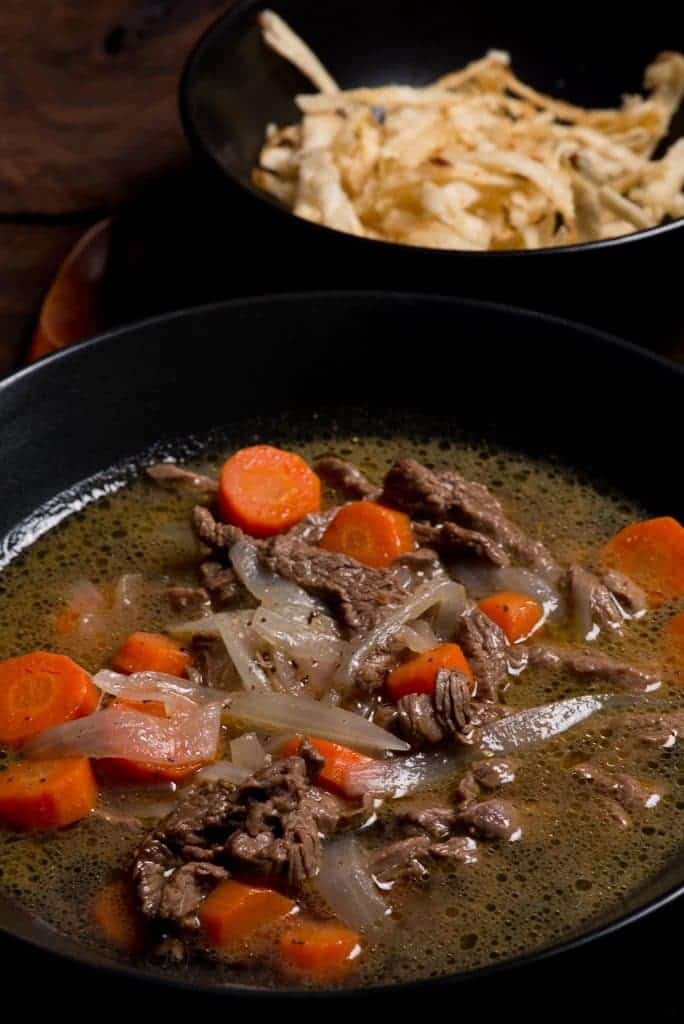 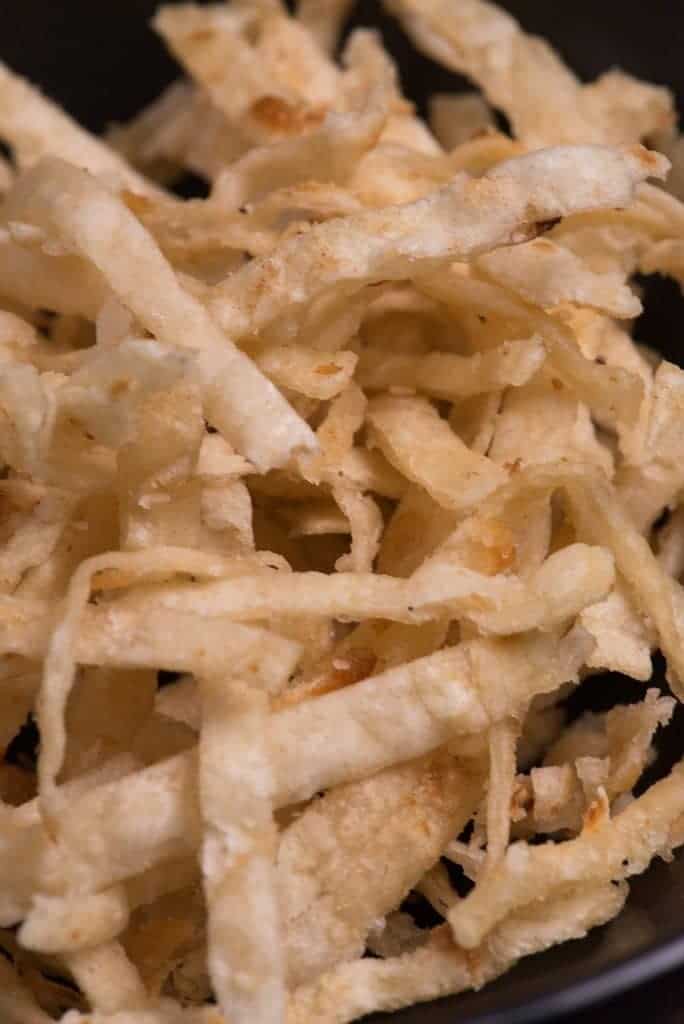 and Suutei Tsai (Tea with Milk and Salt) 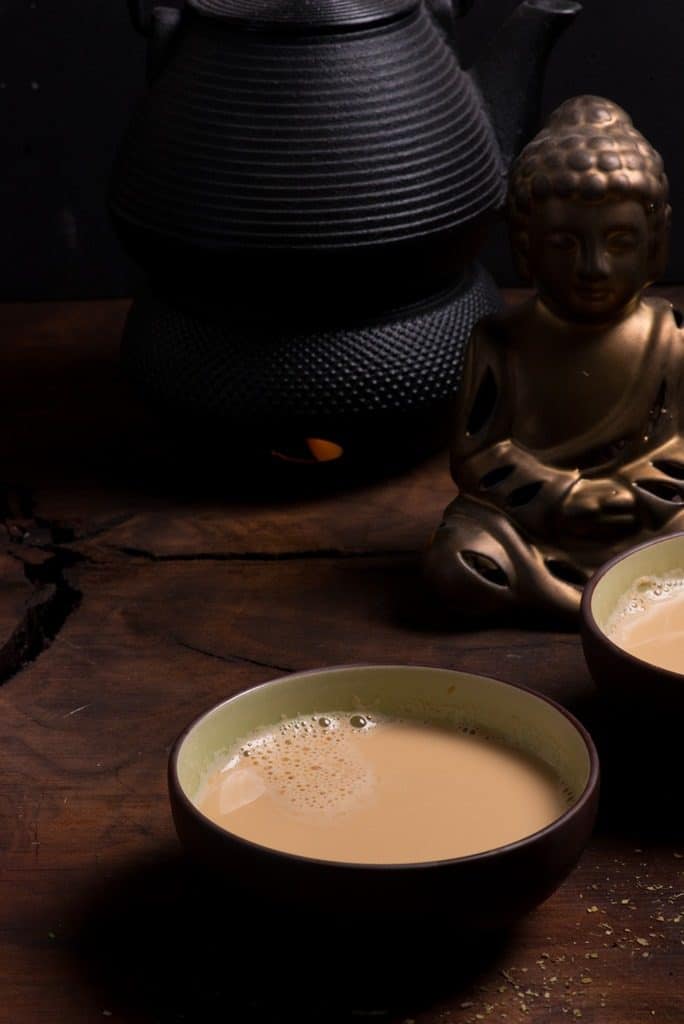 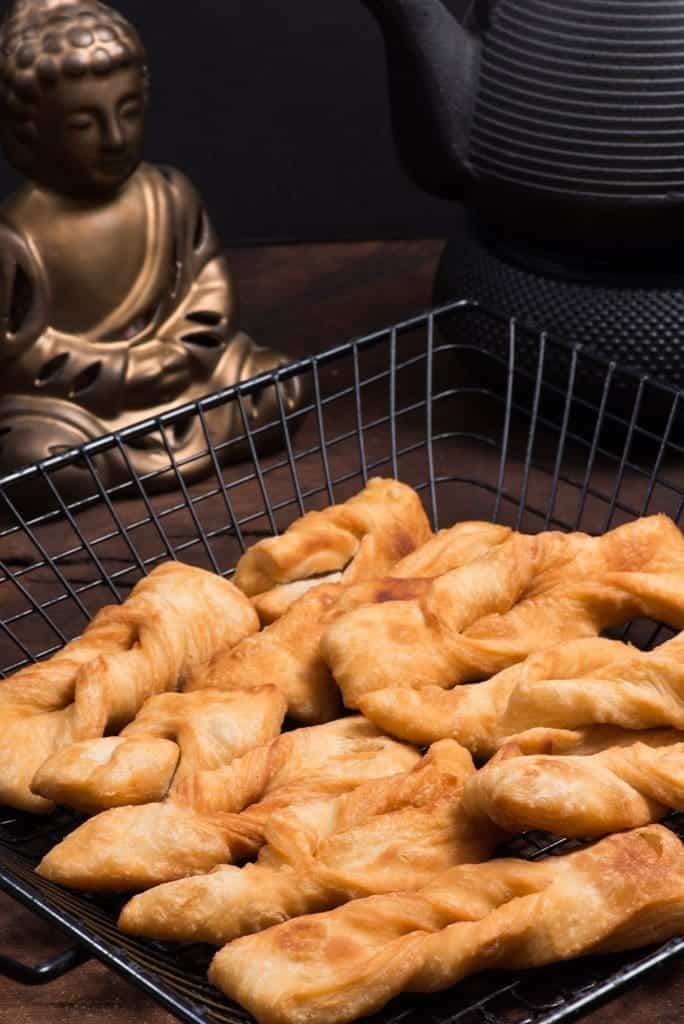 We began our meal with the national dish called buuz.  These delicious liitle morsels are steamed dumplings.  We made ours with minced lamb that was lightly flavored with salt, pepper, garlic and onion.  The shapes of the dumplings are numerous and it is a sign of the cook’s pride in how they shape their buuz.  I made them in three different shapes and they all tasted equally good, (although I am sure I could use a lesson on how to properly shape them.)  They are often dipped in ketchup, which we did as well.

For the main course, we prepared a hearty and lovely, meat soup that had just a few simple vegetables in it.  Of course adding carrots and onions in Mongolia, would be a real luxury.  The soup is only seasoned with salt and pepper and topped with fried noodles called tasalasan guril.  I used the same dough to make the fried noodles that I used for the dumplings; simply made with flour and water.  The fried noodles were a lovely addition.

The meal was served with a tea made with milk and salt.  This drink called suutei tsai, is served in bowls and accompanies nearly every Mongolian meal.  It was actually quite delicious.  My expectations were low, due to the addition of salt, but it contributed an interesting dimension.

For dessert we enjoyed boortsog, which is a fried dough, made with flour, butter, water, sugar and salt.  Of course, just about anything fried tastes pretty darn good and these fried, butter cookies were no exception.  Another sumptuous end to an International Cuisine feast.

After dinner, we decided to try our luck at khoomii, or “throat singing” which involves producing two, simultaneous tones, with the human voice.  After several tries and lots of laughter, we decided  it was best left to the Mongolians.

As we say goodbye to this fascinating county, I leave you with a common saying, regarding Mongolians, who are known to be the best horsemen in the world.

“ A Mongolian without a horse is like a bird without wings.”