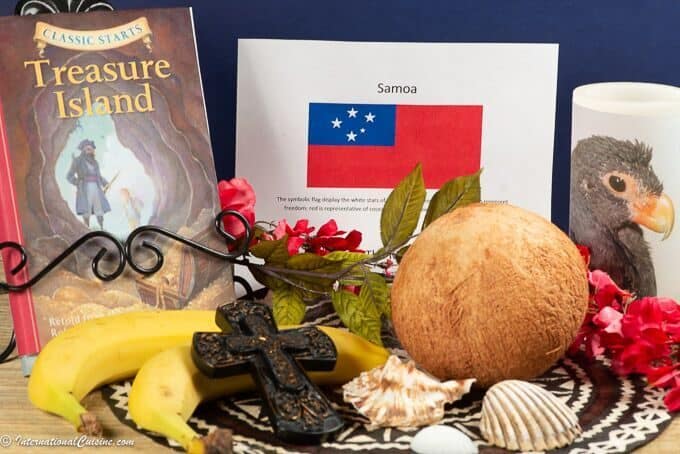 How did Samoa get its name?

There are many legends about how Samoa got its name.  One that comes up often is, that Moa was the family name of the Tui Manus, some of the earliest inhabitants of the islands.  SaMoa, simply refers to the family name.  At one time they controlled a Pacific empire, extending over Tonga, Fiji, the Cook Islands, and more.  The independent state of Samoa was formerly known as Western Samoa.

Where is Samoa located?

Samoa is located south of the equator, in the Polynesian region of the Pacific Ocean, about halfway between Hawaii and New Zealand.  The Polynesian group of nine islands, consists of two main islands, Upolu and Savaii, which makes up 99% of the land, and seven smaller islets.

Samoa is a land of many natural wonders including:  rain forests, waterfalls, beautiful white sand beaches and intricate caves.  The Samoan people are very proud of their incredible nature and have taken important steps to protect it.  The majority of endemic species there are birds.  The tooth billed pigeon is the national bird and has no close living relatives, but is genetically similar to the extinct dodo bird.

The warm seawater is filled with marine life including dolphins and whales, as they migrate through the region.  Turtles are often spotted there as well.  Diving and snorkeling are excellent in the crystal clear, Samoan water.

A Brief History of Samoa

The Polynesian ancestors were guided by the stars as they rowed in their sea-faring canoes across the Pacific Ocean thousands of years ago.  Samoa’s oldest known site of human inhabitation is Mulifanua, on the island of Upulo, some 3000 years ago, around 1000 BC.

Over the early years, the Samoan people engaged in battles, trade and intermarriage of nobility with the neighboring islands of Fiji and Tonga.  The interweaving of the cultures and bloodlines have strengthened the ties between these South Pacific islands.

Dutchman, Jacob Roggeveen, was the first European to site the islands in 1722.  European whalers and traders started to arrive in the late 1700s.  By far, the most important change in Samoa was due to the western missionaries.  They, along with the arrival of Reverend John Williams in 1830, converted the people from their belief in multiple gods for the sun, earth, heavens and sea, to one God.  Samoans are now a devoutly religious people with much time given to church activities.  In nearly all of the villages they have a daily prayer curfew between 6-7 pm.  It is called “Sa” and lasts for about 20-30 minutes, often marked at the beginning and end by a bell ring or the blowing of a conch shell.  For many Samoans, Christianity and fa’a Samoa (Samoan way of life) are inextricably woven.

After the beginning of World War I, New Zealand captured Western Samoa from the small German company that was stationed there.  After the war, New Zealand took administrative control on behalf of the United Nations from 1918 until they gained their independence, in 1962.  Western Samoa became the first Pacific island to gain independence.  It was in 1997 when Western Samoa dropped the Western from its name and was called simply, Samoa.  They celebrate Independence, June 1st-3rd, each year.

The vast majority of Samoans possess Polynesian heritage, with about 93% identifying themselves as ethnically Samoan.  Euronesians account for about 7%.  This is a mix between European and Polynesian ancestry.  Most of the population speaks Samoan, a language closely related to Maori and Tongan languages.  It is believed to be among the oldest of the Polynesian dialects.  There are two official languages in Samoa, Samoan and English.  English is used mostly for business communications.

The term fa’a Samoa means the Samoan way and refers to a complex cultural code that guides and teaches individuals how to lead their life.  It is governed by protocols and etiquette, all in accordance with core values within fa’a Samoa.  These values include family, language, the environment, genealogy, the arts (including tattooing,) as well as political and social structures.  The Christian values brought to the islands were fully integrated into fa’a Samoan life.

Fa’a Samoa has three key elements to it.  The matai (chiefs), aiga (extended family), and the church.  Matai are the heads of the extended family unit and their role is very complex; covering family, civic and political duties in the village.  There are 362 nu’u (villages) found throughout the islands, with a total of 18,000 matai.

The aiga, or extended family, is made up of parents, brother, sisters, children and grandparents, cousins, nieces and nephews living within the village.  When family members marry partners in other villages, the in-laws become part of the extended family unit.  It is the duty of a Samoan to be of service to their aiga for life.

Tatua (tattoo) is a traditional art form that represents the spiritual and cultural heritage of Samoa.  It is seen as a rite of passage for men where the intricate pattern of the pe’a covers the body from the waist to the knees.   Master tattooists use traditional handmade tools made from bone, tusk, shark teeth, shell and wood.  Women also get tattoos, called malu, but they cover only the thighs.

Siapo (tapa) is used traditionally as clothing and is an important part of traditional ceremonies.  This printed cloth is made from the inner bark of the mulberry tree and makes a wonderful souvenir.  Weaving toga (a fine mat) is another art form and one mat can take years to make as it is woven from very fine fibers of the pandanus plant.  Everyday items such as baskets and mats are woven with palm fronds.

Dance and music are also very important parts of Samoan culture.  Often these two elements are showcased in a fiafia night which includes a feast followed by a show of music and dance.  Storytelling, or siva is performed by young women, while the fast actions of the fa’ataupati or slap dance is performed by men.  This dance ends with siva afi or the fire knife dance, which is performed by young men twirling a large knife with burning flames at both ends, set to the rhythmic beat of a wooden drum.

Each day you will find young men paddling their canoes out in the lagoon to catch fish, while others go to the plantations to cultivate and harvest what is needed for their daily meals.  The ocean provides crayfish, snapper, mahi-mahi, octopus and tuna.  There is always a fresh catch of the day.  The plantations provide bananas, taro, tropical fruits and vegetables and of course, coconut.

Samoans traditional food is cooked in an uma (an earth oven of hot stones) which is placed on what is called fale, a stand that holds the uma.   Oil is not typically used.  Fish is wrapped in a banana leaf with freshly made coconut cream poured on top.   Pork and chicken are also popular proteins and are often cooked whole.  Taro and green bananas are tucked into the gaps.  When the food is placed on the hot coals, banana leaves are placed over the food to seal in the heat.  The food takes a while to cook; usually about 2 hours and it is not uncommon to cook meals in this way, three times per day.  A couple of delicacies include palusami (young taro leaves cooked in coconut cream)  and oka I’a (raw fish in coconut cream).

So let’s enjoy a Samoan meal: 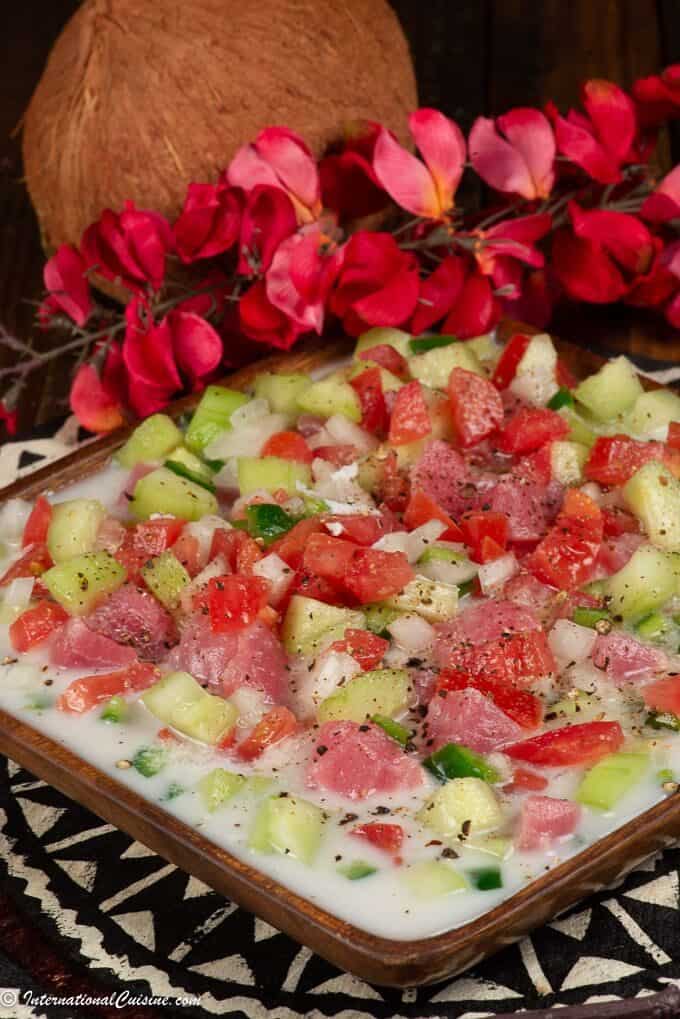 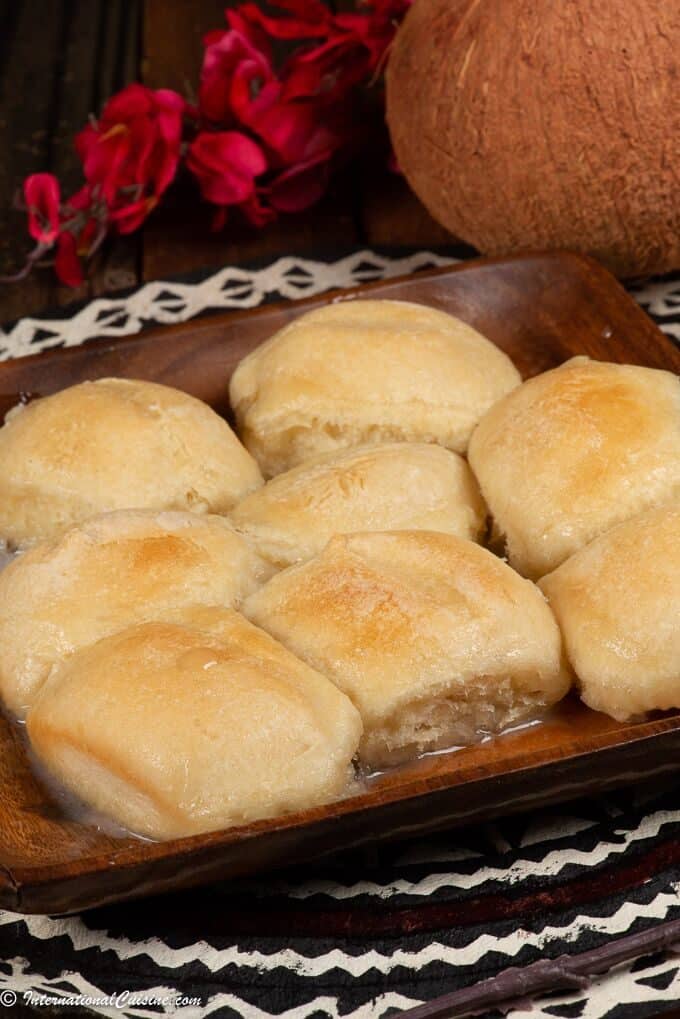 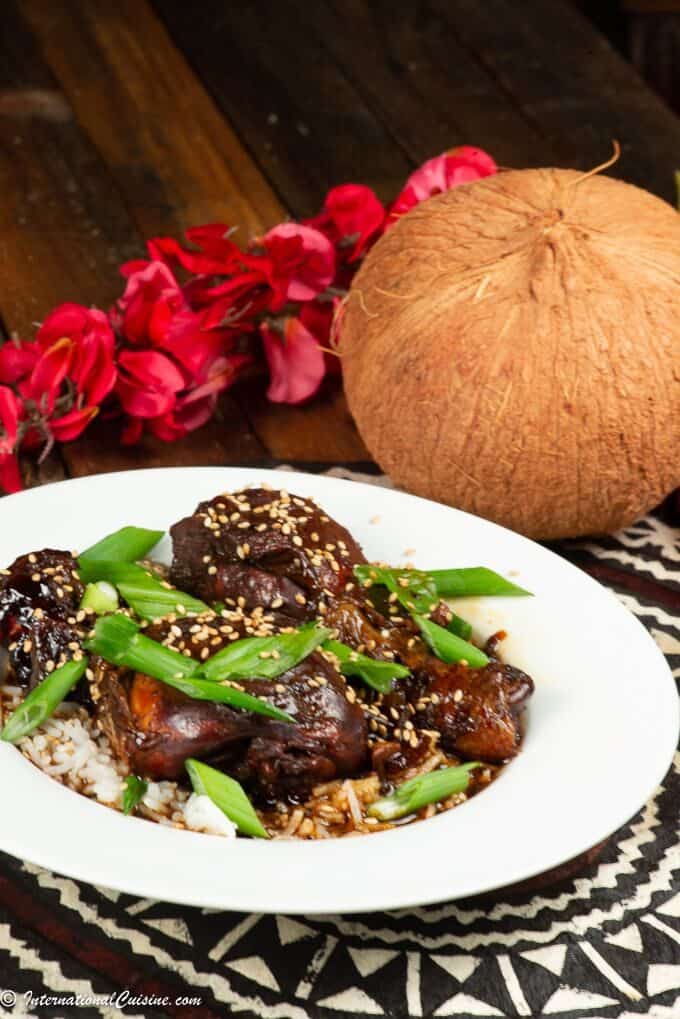 We set the scene with siapo, the printed tapa cloth, the traditional cloth made in Samoa.  We placed the a copy of the book called Treasure Island, written by the beloved Robert Louis Stevenson, who spent the last five years of his life with his family  there before his early death.  He was known to the Samoans as Tusitala or the “Teller of Tales.”   His homestead is now a museum and the most popular attraction in Samoa.  He is buried at the top of Mt. Vaea, which has the best views overlooking the city and bay.  We completed the scene with a photo of the rare national bird, the tooth billed pigeon, and the national flower, the red ginger, along with a coconut and some bananas.

Our first course was oka I’a, a raw fish salad that is popular on many of the Polynesian islands.  Similar to a Latin ceviche, the fish is first marinated in lemon or lime juice until the fish turns opaque.  The fish is then mixed with vegetables, like cucumber and tomato, and  doused with coconut milk.  I really love ceviche and oka I’a was no exception!

The oka I’a was served alongside the famous pani popo or coconut rolls that really were to die for.  The rolls are sweet and to be honest, I could have eaten the whole pan. They are that good.  (Consider it fair warning, if you decide to make them.)

For the main course, we prepared a Samoan style chicken that was cooked in a Dutch oven, which came as close as possible to an uma.  The chicken was cooked with a dark soy sauce, onions and vinegar, which resulted in deliciously tender bites, full of flavor.  It was served over steamed, coconut rice.  It was a perfect combination.

For dessert, we had a mashed, banana dessert called poi.  Samoan poi is not the same poi that is popular in Hawaii; theirs is made from taro stem.  This poi is more like a banana pudding and was the perfect sweet and creamy end to our Samoan meal.

Now if we were in Samoa for the meal, we likely would partake in kava or ava as they call it there.  A drink that is popular for celebrations and ceremonies and comes from the roots of a small shrub.  It’s considered non-alcoholic but psychoactive.

As we say goodbye to this little Island paradise in the South Pacific, I leave with a few words written by an English poet, Rupert Brooke, on a trip to Samoa in the 1800s.

“You lie on a mat in a cool Samoan hut and look out on the white sand under the high palms and gentle sea, and the black line of the reef a mile out and moonlight over everything.   And then among it all are the loveliest people in the world, moving and dancing like gods and goddesses.  It is sheer beauty, so pure it is difficult to breathe in it.”