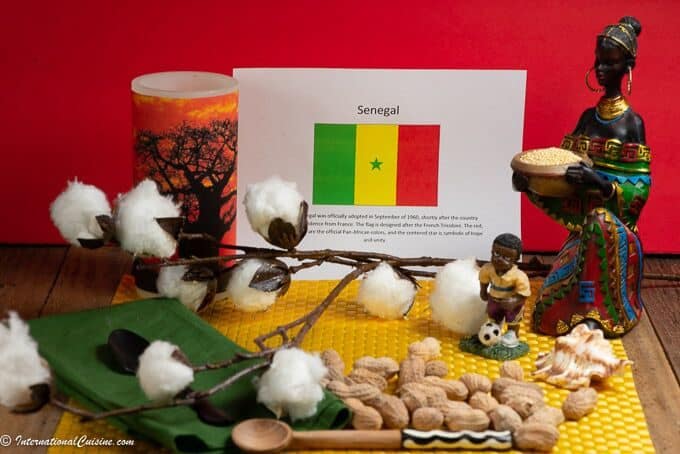 How did Senegal get its name?

There are a few stories about the name Senegal.  Some believe that the country is named after the river of the same name that runs along its northern border, before entering the Atlantic Ocean.  Some historians believe the name may come from a Saharan Berber people called the Zenega, who lived north of the river.  In the Wolof language, “Sunugaal” means “Our Canoe” and the story goes that there was a miscommunication with a Portuguese captain and a Wolof fisherman over a canoe. This is the etymology of choice accepted by the Senegalese people, due to the charming symbolism of a nation, “all in the same boat.”

Where is Senegal located?

Senegal is located on the Cap-Vert peninsula in West Africa on the Atlantic coast.  Its vibrant capital city of Dakar, is the westernmost city on the African mainland.  Senegal has many neighbors: Mali, Mauritania, Guinea-Bissau, Guinea and she wholly surrounds the small country of The Gambia.  This oddity makes the country look on a map like a big mouth taking a bite.

A Brief History of Senegal

It is believed the first humans in Senegal were hunters but sometime, around 3000 BC, they learned to farm.  By 500 AD a sophisticated society arose to make intricate iron tools and buildings made out of stone circles.  Towns and trade flourished.  In the 13th century Senegal was part of the Empire of Mali, which lasted until their decline.  In the 15th century, Senegal was broken up into several small kingdoms.

The first Europeans to arrive there were the Portuguese in 1544.  They began to trade with the Africans.  In the early 16th century, the Portuguese started taking slaves from West Africa in large numbers to work sugar plantations.  The English, Dutch and French all established slave trading stations along the coast.  The Ile de Goree was taken by the French from the Dutch in 1677.   During the 18th century, the slave trade flourished.  Europeans persuaded Africans from the coast to attack neighboring tribes and take captives.  Millions were shipped across the Atlantic in appalling conditions.  Today there is a museum called the House of Slaves with the “Door of No Return” that is also a UNESCO World Heritage site.  It is a solemn place for contemplation and reflection.

The French took over Senegal and made it the headquarters of their growing West African empire.  This gave the Senegalese people education and healthcare that many other nations did not receive.  They also were a prosperous colony exporting ground nuts.  The French ended up giving independence to Senegal on June 20, 1960 as part of a union with Mali.  That was short-lived and Senegal became a separate nation on August 20, 1960.  Leopold Senghor, a catholic, became the first leader and is considered to be the founding father of the nation.  He introduced a new constitution in 1980.  Senegal is a poor country but unique in the world in many respects.

The Sengelase have a motto, a way of life, called “Teranga,” which basically means “Hospitality.”  “The more I give, the more I have.”  This simple philosophy has shaped the nation in profound ways.

The country is made up of about 16 million people coming from about 20 ethnic groups.  The largest is the Wolof, however each ethnicity is important in the political, social and cultural spheres of the country.  The Wolof language is spoken by the majority of the people in Senegal and what you typically hear in the streets.  French and Arabic are considered to be the official languages, used in schools and government.

The country is 96 percent Sufi Muslim, a more mystical sect of Islam which was introduced in the 11th century.  Christians, mostly Roman Catholics make up the balance.  They are a peaceful nation.  Western clothing is common in the urban areas of Senegal.  It is a choice however and many women prefer to wear a long, loose fitting, dress called boubous, with a matching headscarf.

Like most African countries, Senegal has an age-old tradition of storytelling.  Written literature of Senegal is considered to be amongst the most important in West Africa.  Leopold Senghor, the founding father, is one of the most globally recognized poets.  Crafts such as glass painting, basket weaving, mask-making, wood carving, and textile painting are just a few of their specialties.

Music also plays an integral role in society.  The traditional music of the country has been influenced by the Malian Empire but it is faster and livelier.  Each ethnic group brings their own unique sounds and dance styles to the fusion of the nation.

Polygynous marriages are common in Senegal.  Households are often large and consist of a man and his multiple wives and children. The social structure is based on kinship.  Children and elders are highly regarded and children are taught social values at an early age.  In fact, the communal plate of food is a way to teach values.  The children have to wait, and only eat around the edges.  Adults get the triangle portion in front them and the women leave bites of protein for the children to enjoy.  With Teranga however, there is always room at the table for a guest.

Some say Senegalese cuisine is the best in the whole of Africa.  It has been influenced by North Africa, the French and Portuguese.   Being a nation of mostly Muslims, alcohol and pork are not consumed by the majority, but still available.  It is common to see a Senegalese enjoying a glass of bissap (a purplish juice made from the hibiscus flower) alongside a friend enjoying a local beer.

Because Senegal has rivers and borders the Atlantic Ocean, fish are very important to their cuisine.  Peanuts are the primary crop of Senegal.  In fact, they are one of the world’s largest exporters of peanuts.  Couscous, made of millet, white rice, sweet potatoes, lentils, black-eyed peas and numerous other vegetables, are considered staples.  Meat, fish and vegetables are typically stewed or marinated in herbs and spices and then served over rice, couscous or enjoyed with a French-style baguette.

Some of Senegal’s most popular dishes are: thieboudienne, which translates to the rice of fish, thiebou yapp, which translates to rice of meat and is typically made with beef or lamb. thiebou guinar is the rice of chicken and thiebou guerte is the rice of peanut.  Yassa, maafe and dibi are also popular which were made for neighboring countries.  Desserts like cinq centimes, aka the five cent cookie, is a peanut cookie that is quite popular as is thiakry, a millet pudding, or banana soup.

So let’s enjoy a Senegalese meal: 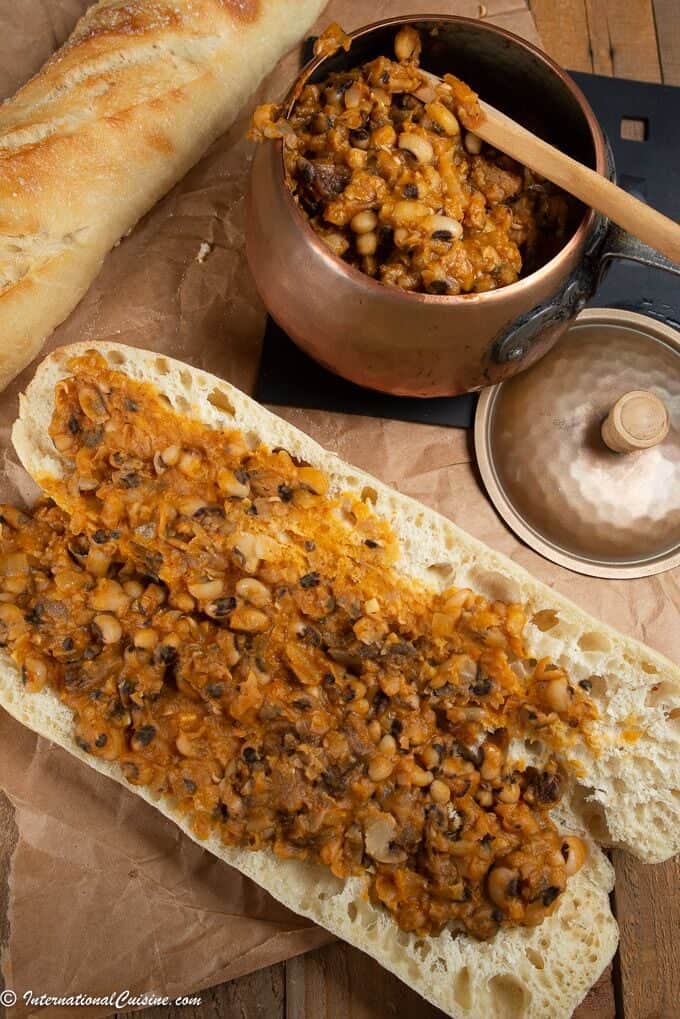 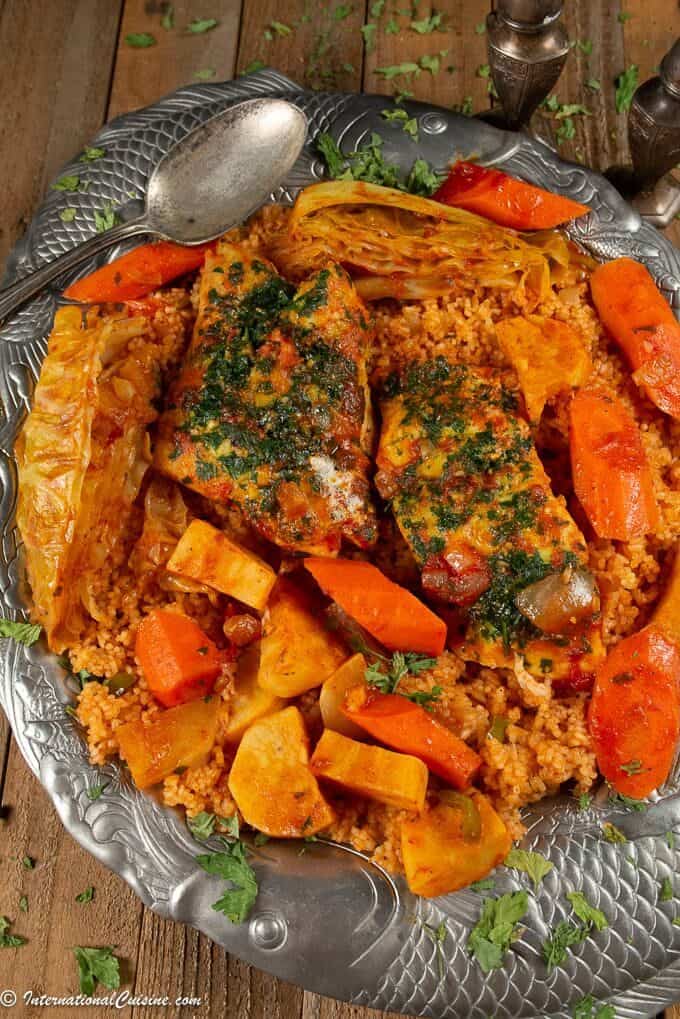 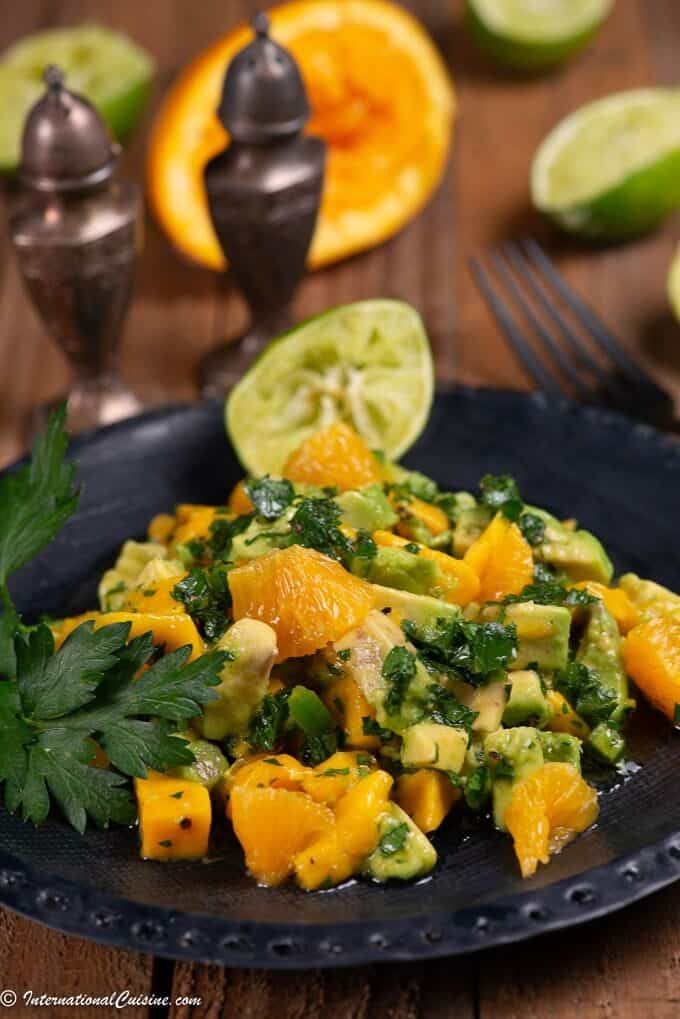 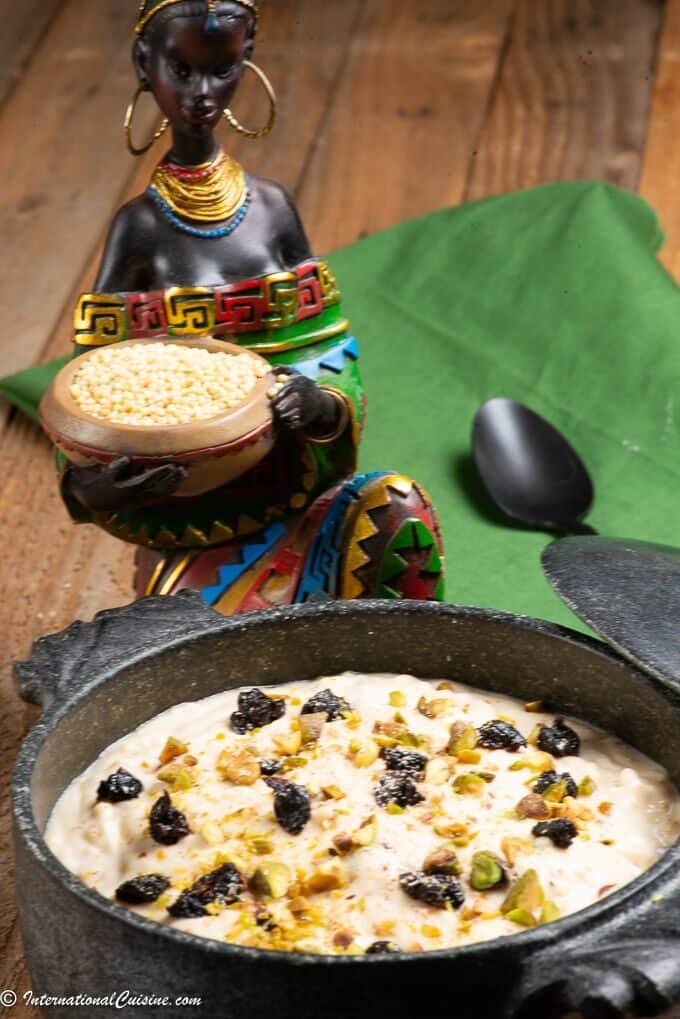 We set the scene with the colors of the flag; red, yellow and green.  Peanuts started the decor, as that is their main crop.  Cotton, which is another important crop, along with millet were placed.  A soccer ball was added to represent the national sport.  A photo of the famous Baobab tree was placed which is also called “the tree of life” and is a national symbol of Senegal.  These massive trees are in danger from drought and population growth but you will find them in the center of many villages, and always serve as a gathering place.  We put on Youssou N’Dour music.  In 2004, Rolling Stone magazine described him as “ the most famous singer alive.” You should check him out.

Our first course was a famous street food that can be found all over the country.  It is called ndambe, a spicy bean and beef mixture that is slathered on a French baguette.  In Senegal, you first buy your fresh bread and then find your favorite ndambe vendor.  Sometimes they are made with lentils and have no meat.  It is a wonderful sandwich that is often enjoyed for breakfast.

The main course was the famous thieboudienne, pronounced “ceebu jen,”  the national dish of Senegal.  The classic Senegalese dish is a fish stew with vegetables, served over rice.  It is no ordinary fish stew as it is bursting with layers of flavor.  The fish is first stuffed or marinated with a puree of parsley, green onions, garlic, chili and Maggi.  (Honestly, this puree can be used as a marinade on so many things, I fell in love.)  The fish is then fried and set aside, the vegetables are cooked until tender with the left over puree, along with chopped onion and tomato.  Smoked fish and a unique ingredient called Netetou is added, which is made from a seed and then fermented.  It adds a unique, almost umami flavor.  It is a staple spice used in many West African countries.  The rice, typically made with broken rice kernels, is cooked until tender.  Then the whole meal was plated onto a communal dish, which was eaten using a spoon.   Alongside the main course, we enjoyed a refreshing avocado and mango salad.  This was the perfect accompaniment to the hearty main dish, as it had a lovely, fresh, citrusy flavor.

For dessert, we loved thiakry.  It is a sweet pudding, similar to a rice pudding but this was made with millet.  It was flavored with vanilla and nutmeg and topped with raisins and pistachios.  We enjoyed it with mint tea, which is served in three varying concoctions, as is done in neighboring countries Mali and Mauritania.

As we say goodbye to this most intriguing country of Senegal, it is my hope that we can all implement more Teranga into our lives.

I leave you with a few Senegalese proverbs:

“There can be no peace without understanding.”

“An empty belly has no ears.”

“A lobster loves water, but not when he’s being cooked in it.”