How did Slovenia get its name?

The word Slovenin is a derivation from “slovo” meaning “word,” denoting people who speak the same language.  Slovenia is officially known as the Republic of Slovenia but is called Slovenija by its people.  The name comes from the Slovenes; the group of South Slavs who originally settled the area.  It is also known as the “Land of Hayracks.”

Where is Slovenia located?

Slovenia is a small country, situated in southeastern Europe, on the Balkan Peninsula.  It is bordered by Austria to the north, Hungary to the northeast, Croatia to the southeast, and Italy and the Adriatic Sea to the west.  It is a mountainous and forested country and sits in the foothills of the eastern Alps; making it a skier’s destination.  It has a small coastline along the Adriatic Sea, between Italy and Croatia, which enjoys a warm, Mediterranean climate.  It is also home to the Kras Plateau, which is a unique area of unusual geological formations; underground rivers, caves and gorges.  Its capital city and largest city, Ljubljana (pronounced lub-lee-yana,) is located in this area.  Ljubljana means “the loved one” and was voted the “Green capital of the world” in 2016.

A Brief History of Slovenia

The Slovenes created their first state back in the 600s, which lasted until the eighth century when it was absorbed into the Frankish empire.  In the tenth century, Slovenia fell under the control of the Holy Roman Empire.  It then became part of the Austrian Hapsburg Empire, from 1335 to 1918.

At the end of World War I, Slovenia joined with other Slavic nations to form “the Kingdom of Serbs, Croats and Slovenes.”  It was renamed in 1929, “the Kingdom of Yugoslavia.”  Slovenia and its neighboring states fell under Nazi Germany’s control in World War II.  Under the leadership of Josip Broz Tito, they fiercely resisted the German, Italian and Hungarian occupation, which led to a socialist Yugoslavia at the end of the war.  During the post-war communist period, Slovenia was the most prosperous region of Yugoslavia.

After Tito’s death in 1980, serious disagreements between the states began to grow.  On June 25, 1991 the Republic of Slovenia declared Independence after a relatively bloodless ten day war.  Since Independence, Slovenia has worked hard for economic stabilization and government reorganization.  Today, Slovenia is a member of the EU and the UN and NATO and is a thriving nation with a renewed focus on tourism.

Slovenia is home to about two million people; half live in urban areas and the other half living rural.  About 50% of the population is Roman Catholic.  The large majority of the population is Slovene, with a few, Croatians, Hungarians, Albanians, Serbs and Italians in the mix.  The official language is Slovene, or Slovenian, and belongs to the Slavic languages.  Despite its small size, there are over 32 different dialects spoken in the country.  Many Slovenians are multi-lingual, and they have a 99.7% literacy rate.

Slovenia has a very strong cultural heritage and is proud of hosting over 100 festivals each year, to include music, dance, film and food traditions.  Many Slovenians are beekeepers, some 90,000 of them.  That is, nearly one in nine souls take care of the calm, Carniolan, honey bees, that are native there.  Many Slovenians also grow grapes for wine. There are over 28,000 vineyards in Slovenia, making it a wine haven.  This includes the oldest grapevine in the world, that grows in the Maribor area and is estimated to be 400 years old.

Speaking of old, Slovenia is home to some of the oldest artifacts in the world.  The oldest flute, made from a bear femur, is estimated to be 60,000 years old, a needle was discovered believed to be 30,000 years old, along with a 5200-year-old wooden wheel.

Slovenia has much to offer especially for those who love nature and the outdoors.  Its highest peak is Mount Triglav and is featured on their flag.  The picturesque lake, in the Julian Alps, called Lake Bled, is a very popular tourist destination, with an island in the middle of the lake and an old church, very popular for weddings.  The church dates back to the 17th century but houses Gothic frescoes go back to 1470.  Slovenia is home to many castles and also is home to important Baroque and Art Nouveau architecture.

Whether it is skiing in the Alps, exploring massive caves, kayaking along one of their beautiful rivers, or visiting the Venetian Gothic Mediterranean town of Piran along the Adriatic coast, it won’t take long for Slovenia to be the next major tourist destination in Europe.

Slovenia, with its small size and many neighbors, has had many influences on its cuisine.  It is said to have 24 distinct culinary regions.  Generally speaking, Slovenian food is whole and hearty.  They do have many specialties, such as their famous karst prosciutto, cured with the cold winds of the region.  Buckwheat is made into several dishes and its white flowers are a favorite of the bees, who produce buckwheat honey.  Whole arrays of mushrooms are found throughout Slovenia and are favorites for foraging.

The European walnut tree is native, but many were destroyed for their beautiful wood.  There has been a resurgence of the walnut tree and Slovenia is now home to some 100,000 of them; wonderful news for potica (a Slovenian nut pastry) nut lovers and bakers.  Dandelions, harvested in spring, are a nutritious green often used in salads.  Potatoes are ubiquitous and cooked in all varieties of ways.  Seafood is plentiful along the coast, however trout from the Soca river is the most beloved.  Carniolan sausage, made with pork, and beef is beloved. Soups are also extremely popular, one called Jota, is considered a peasant dish which is made with turnips, beans and onions and found throughout the nation.  Cheeses and dairy are also very popular.

So let’s enjoy a Slovenian meal: 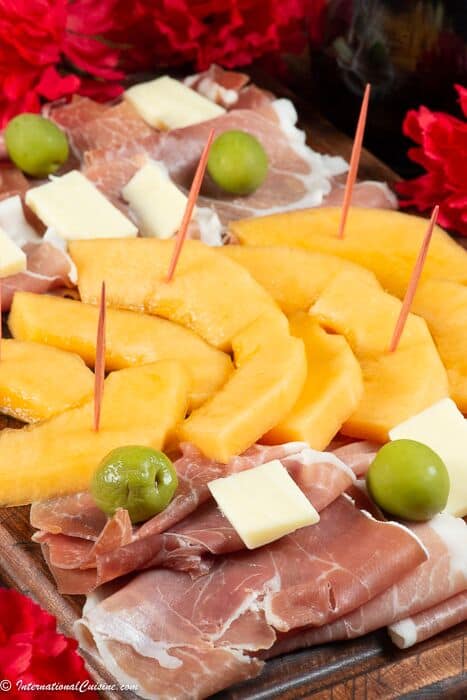 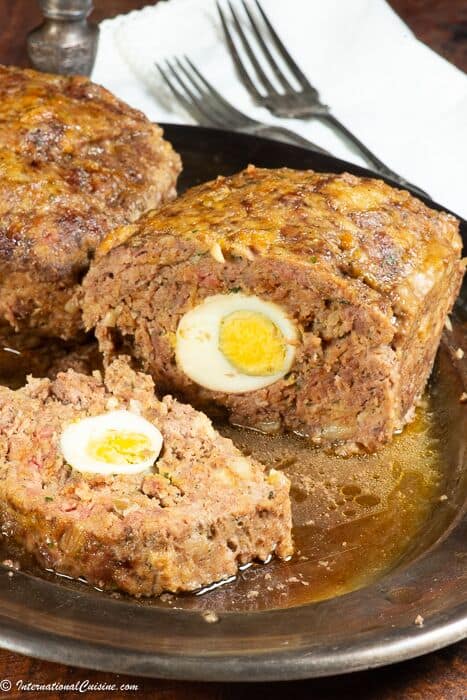 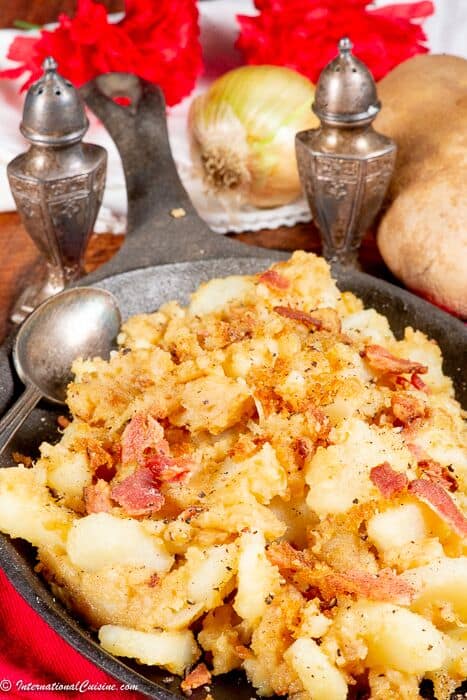 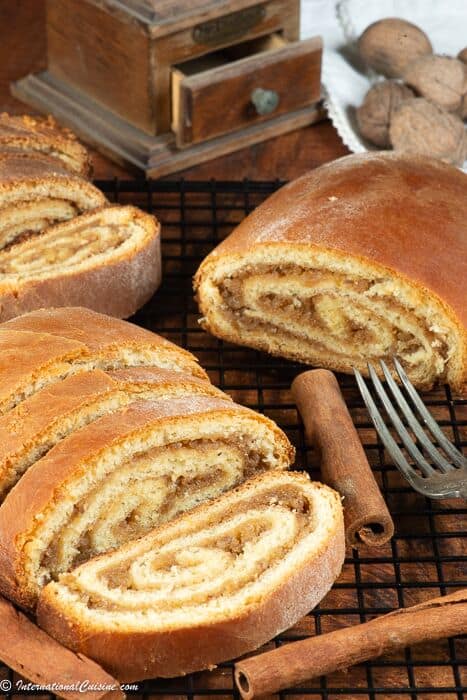 We set the scene with a honey jar, (featuring a bear with a honey statue.)  Slovenia is an important home to bears in its forested areas.  Walnuts and grapes were placed, along with a picture of their national tree, called the Linden tree, whose canopy has been a gathering place in Slovenian villages for centuries.  A picture of the famous Lipizzan horse was also added.  This is a breed that originated there.  Finally, we added a carnation; their national flower.

We began with a toast of a Slovenian white wine and said, “Na Zdravje” or “Cheers!”  We savored the appetizer course of prosciutto, sheep’s cheese and a bit of sweet melon. It was a lovely plate to begin a meal.

Our main course was called Sefani Pecenka; a simple meatloaf-style dish, spiced with vegeta, paprika, thyme and parsley, with a surprise of hard-boiled eggs in the middle.  The Stephanie roast was served alongside decadent roast potatoes, called prazen krompir.  These potatoes were topped with pork cracklings that had been cooked with pork fat and onions.  The combination of these two dishes was superb; hearty and comforting.

For dessert, we enjoyed one called potica.  Pope Francis made this dessert world famous when he mentioned it after he met Melania Trump  at the Vatican in May of 2017.  Melania Trump is the second-ever first lady to be born outside the USA.  She was born in Slovenia.  He said to her, “What do you give him to eat? Potica?” The sound-byte went viral and put potica on the world map.  It is not hard to see why.  It is a delicious, nut pastry that is frankly, unforgettable.  Although the walnut filling is typical, it is also made with other fillings, like raisins, tarragon, cheese, poppy seeds and chocolate.  There is another saying in Slovenia, “A potica a day keeps the sadness away.” Just another testament to its popularity.

As we say good bye to this lovely, little country, called Slovenia, I leave you with a few Slovenian proverbs:

Pray for a good harvest, but keep on hoeing!

Who is forced to go to church, will not pray.

Politeness costs nothing, but yields much.