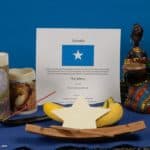 How did Somalia get its Name?

Ancient Egyptians called it the “Land of Punt.” Punt is also mentioned in the Bible, and ancient Romans called it, “Cape Aromatica.”  They valued its trees, which produced the aromatic gum resins, frankincense and myrrh.  Somali is an ethnic group so, it is believed Somalia means, “Land of the Somali.”  It is the most homogenous country in all of Africa, with Somali making up 85 percent of the population.  Bantu and other non-Somali make up the balance.  The official name is the “Federal Republic of Somalia” and the people there call it “Soomaaliya.”

Where is Somalia Located?

Somalia is the eastern most country of Africa; located on the strategic Horn of Africa.  It is bordered by Ethiopia to the west, Djibouti to the northwest, the Gulf of Aden to the north, the Somali Sea and the Indian Ocean to the east, and it also borders Kenya to the southwest.  It occupies a strategic geopolitical position between the countries of Arabia and southwestern Asia.  Its capital city is Mogadishu, located just north of the equator on the Indian Ocean.  It has the largest coastline of any African country.

A Brief History of Somalia

The origin of the Somali people is not certain but it’s believed that they originated in the southern Ethiopian highlands and migrated into northern Kenya during the first millennium, BC.  Later they migrated onto the horn or peninsula.

Due to its strategic location, influences from both Africa and Arabia are present.  There were multiple Somali empires during the middle ages that had a large impact on trade.  Some of these empires included: the Sultanate of Adal, the Warsangali Sultanate and the Gobroon Dynasty.

Arabs introduced Islam to Africa beginning in the seventh century and by the tenth century, Arab trading posts thrived in southern Somalia, along the Indian Ocean.  Most Somalis converted to Islam by about 1100 AD.  They fought multiple wars against the Ethiopian Christians and became the dominant people in the land.  Their capital, Mogadishu, was at its height of influence and wealth during the 13th century, when it controlled the gold trade along the East African coast.

In the 1800s the British and Italians arrived and established British Somaliland and Italian Somaliland.  The Dervishes fought off the British from the interior for years under the leadership of Muhammad Abdullah Hassan, until they were eventually defeated in 1920.  The Italians controlled most of the area until after World War II, when the British took it over completely.  In 1960, Somalia gained full independence from Britain.

Unfortunately, in 1991 civil war broke out.  Since that time, the country has been in anarchy with no real central government.  It is also home to the jihadist terror group known as Al-Shabaab.  As a result, it is one of the most violent and one of the poorest countries in the world.  They have suffered mass casualties from war, disease and famine and many Somalis live as refugees in their own country or in neighboring ones.  In the north there is an autonomous region known as Somaliland but it is not recognized as such by the international community.

The population of Somalia is a guesstimate of about 14 million.  The official language is Somali however, it did not become a written language until 1973.  Arabic is also an official language and is spoken and read for religious reasons.  A small percentage of Somalis speak Italian and a growing number speak English.  The official religion is Sunni Islam; traditionally Somalis practice a moderate form of Islam, influenced by Sufism.  However, the Salafi movement, a reform branch, has gained more political influence in recent decades.

About 3/5th of the population are nomadic herders, the others are city dwellers.  The Nomads spend nearly all their time outdoors. The traditional shelter of the herders is called the aqal, which is a dome shaped, collapsible hut, made from poles and covered with hides or woven, fiber mats.  It is easy to take down and reassemble and is the responsibility of the women of the family.  It is carried by camel.  Typically only a bed is inside the aqal, made from wooden stakes and covered with hides.  They have few possessions and just enough household items for cooking.  Many nomadic camps are surrounded by a fence made from thorn bushes to keep out predators.  Animals are kept in corrals, also made from thorn bushes.  They typically will make camp near a shade tree which is used as a gathering place and class room.

Clan groupings of the Somali people are important social units.  Clan membership plays a central role in Somali culture and politics.  They are patrilineal and are divided into sub clans, resulting in extended families.  Unfortunately clan rivalries are one of the problems they face in establishing a central government for the nation.  Somalis have a very high fertility rate, an average of six children born per woman.  However, they have a very low life expectancy, with only 51 years for a man and 55 years for a woman.

Somali cuisine is varied with different local foods in every region of the country.  Its main influences come from East Africa, Arabia, Turkey, India and Italy.

The camel was first domesticated in Somalia and there are more camels in Somalia than any other country in the world.  Camel milk is to Somalia what cow’s milk is to the west.  They even have a common phrase which is uttered to guests, “soo maal” which means, “go milk” (the camel.)  Camel meat is also consumed however, goat is much more popular.

Goat meat is often cubed and seasoned with a spice blend called xawash, similar to Ethiopia’s berbere.  They make the cubed meat into what is called suqaar, a common dish like a stew which is often eaten with rice or anjero, a flat bread, similar to Ethiopia’s injera.  Spiced rice called bariis iskukaris, which is similar to a pilau, is beloved.  Sambusas, little fried pastries stuffed with meat or vegetables, are a go to snack.  Generally speaking, the cuisine of Somalia has many spices with cardamom being extremely prevalent.  They like to buy cardamom in pods and grind it, just before use.  Cumin, cinnamon, nutmeg, cloves, coriander, ginger and fenugreek are all common spices.  Somalis also like their food spicy hot, from chilies.  However, they like to put it on the side, so they can add heat to their liking.

So let’s enjoy a Somali Meal: 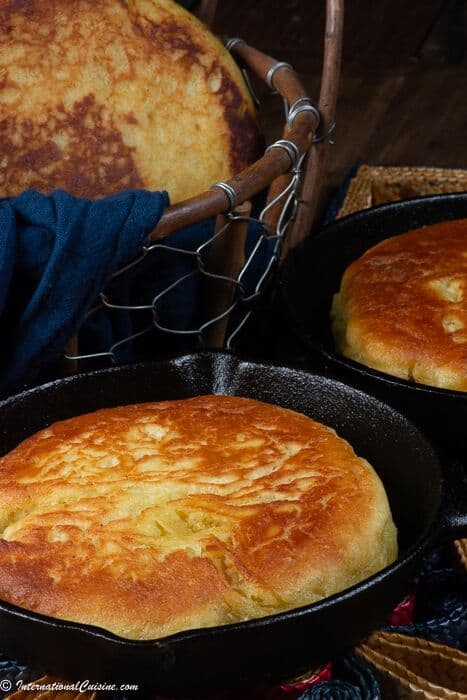 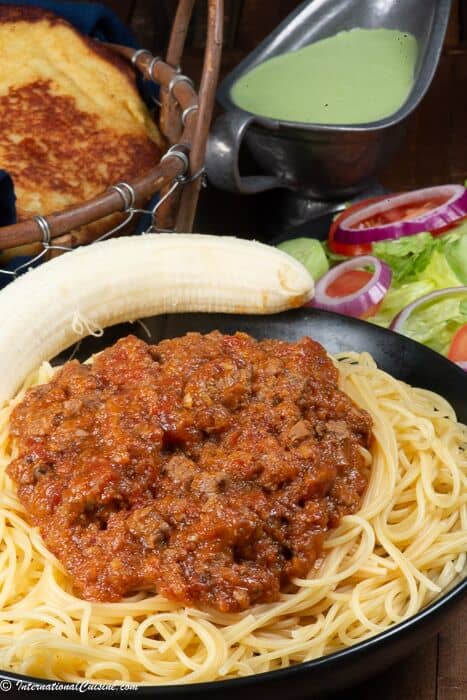 Made with Xawaash (Somali Spice Blend) 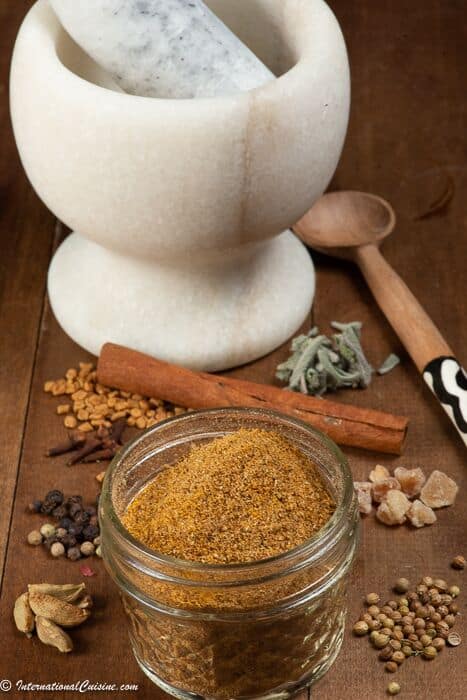 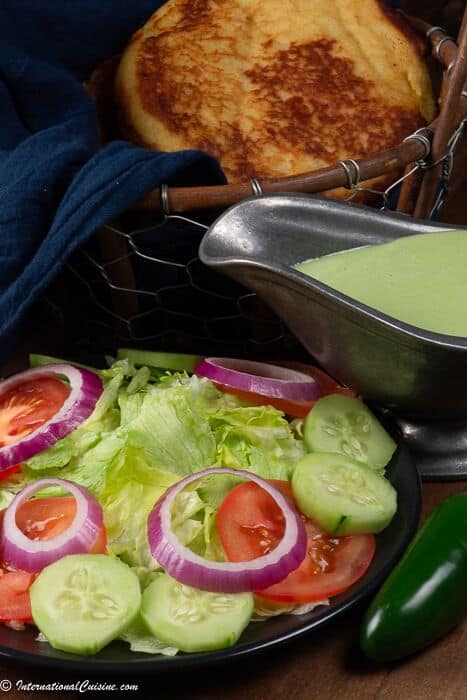 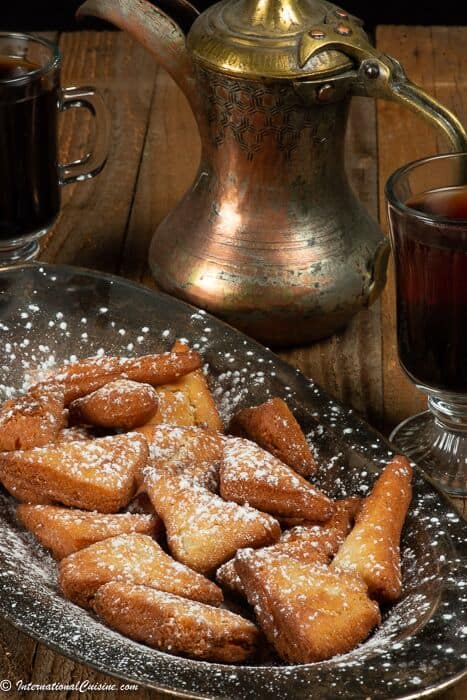 We set the scene with a leopard print cloth to represent the national animal of Somalia.  A white star, which is prominent on the flag of Somalia, was placed along with a photo of a camel.  A banana was added because they eat them with almost everything, and we included their national flower, the King Protea.  We used incense with the fragrance of frankincense.  The meal was served all together, which is customary there, except for the dessert.

The pasta dish was made with small cubes of beef and seasoned with their famous xawaash spice blend, which was excellent.  Somalis eat bananas with all sorts of things and this Somali Pasta was served with a banana on the plate.  I was skeptical at first but oh my goodness, it was delicious.  It provided a wonderful sweetness to the dish which perfectly balanced the flavors.  We also loved the thick bread called muufo which was made with fine semolina and flavored with fenugreek.  It was perfect to soak up the spicy sauce.

A basic salad of lettuce, tomato and onion was served as well but the jalapeño dressing called Bizbaz was out of this world.  I have made the spicy, creamy dressing many times since I cooked this dish and it goes great as a dip for grilled meats or as it was intended, as a salad dressing.

For dessert, we enjoyed kac kac, a delicious fried dough, gently flavored with a hint of cardamom.   We had them with a cup of Somali tea, known as shaah bigays; a simple black tea that is served after heavy meals.

Afterwards, we sat down to watch a film called, Black Hawk Down, a war film about the true story of the U.S. military’s 1993 raid in Mogadishu.

I pray the people of Somalia will find their way to rid the country of radical ideology and  can finally live in peace.