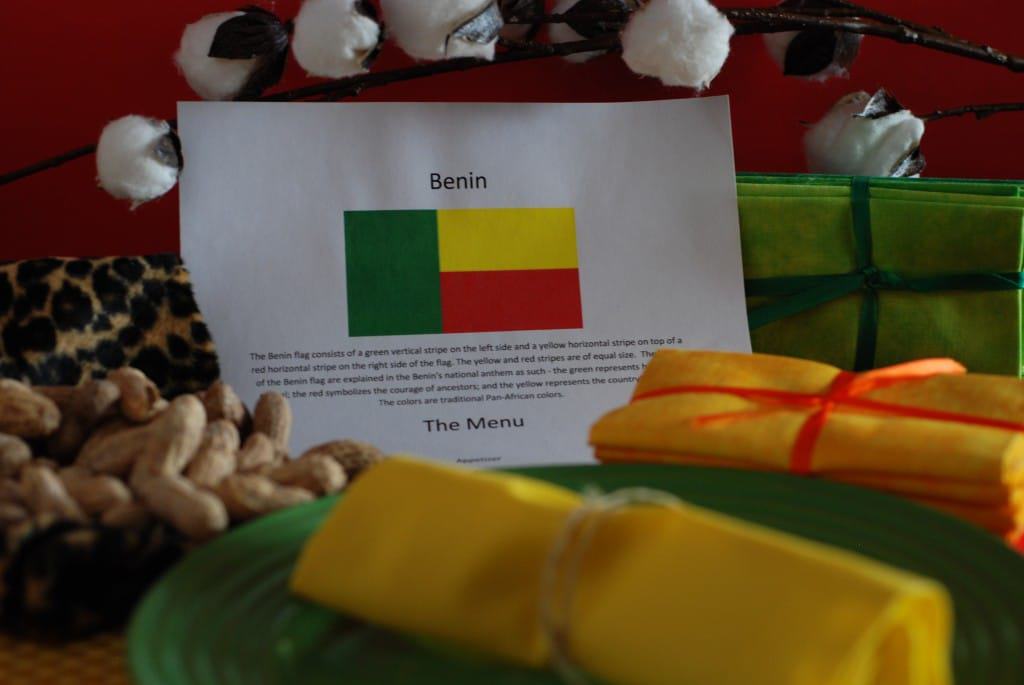 Benin, a small country, located in southwest Africa, is formerly known as Dahomey, and also referred to as the “Slave Coast.” “The Door of No Return” is what one memorial is called. It is a site that sits at the end of the 2.5 mile long journey which led chained, beaten and branded slaves to ships that would take them to their “new lives” in the “new world.” The door, symbolized the end of a slave’s life in Africa. Most would never return to their homeland after being shipped off to the Americas. Surprisingly, it was the Kingdom of Dahomey who sold their own people into the slave trade. Another monument, called Zomachi, was built in 1998, to ask forgiveness for the ancestors who were involved in the slave trade. Today, it is a place where people gather for repentance and reconciliation.

Benin’s shape is short and thin and kind of a key shape, with the north being wider than the south. Her southern border is on the Atlantic Ocean. Her neighbors are Togo, to the west, Burkina Faso and Niger, to the north and Nigeria, to the east. Benin contains many ethnic groups considered to be indigenous. After she gained independence from France in 1960, there were coups, uprisings and instability. Benin, for a time, was ruled by a dictatorship with a Marxist-Leninist philosophy, which then collapsed in 1989. It is one of the first countries in Africa to successfully transform from a dictatorship to a pluralistic political system. Today, Benin is one of the most stable countries in Africa. She is, however, poor and relies heavily on trade with her large neighbor Nigeria and also India and China. Cotton is by far the major export of Benin and they make incredible fabrics: vibrant and colorful. They also export peanuts, cashews, palm oil and seafood products.

Many languages are spoken in Benin, French being the official language, but Fon and Yoruba are the most prevalent tribal languages. Known as the “Cradle of Voodoo,” which the locals call “Vodun” (meaning spirits,) is the official religion of Benin. But this is not what you are likely thinking. This religion is not about sticking pins in dolls and casting black magic spells to torture enemies. Their religion dates back to the thirteenth century. It is a complex system of beliefs, based on the primary belief, that one god created the world. Their god, called Mawa-Lissa (a woman,) is the master over a system of lesser gods and spirits and they do, actually, worship serpents and other animals. Nonetheless, Vodun followers peacefully coexist with Christians and Muslims. A former slave trading port, Ouidah, is the spiritual center for Vodun in Benin.

If you are a white person visiting Benin, you would likely be shouted at and called a “Yovo”. This is to get your attention so that you might wave and smile and perhaps, even talk. The Beninois are very friendly. Just don’t take a picture of them or any of their temples without permission. They believe that photography steals a piece of their soul.

The cuisine is very similar to other West African countries, with staples like maize, yam, salted fish, okra, rice, tomatoes, peppers, beans and couscous. The main source of protein is chicken and goat, but fish and seafood are also common dishes. Fruits, such as mangoes, oranges, pineapple and bananas, are abundant in the south of Benin. 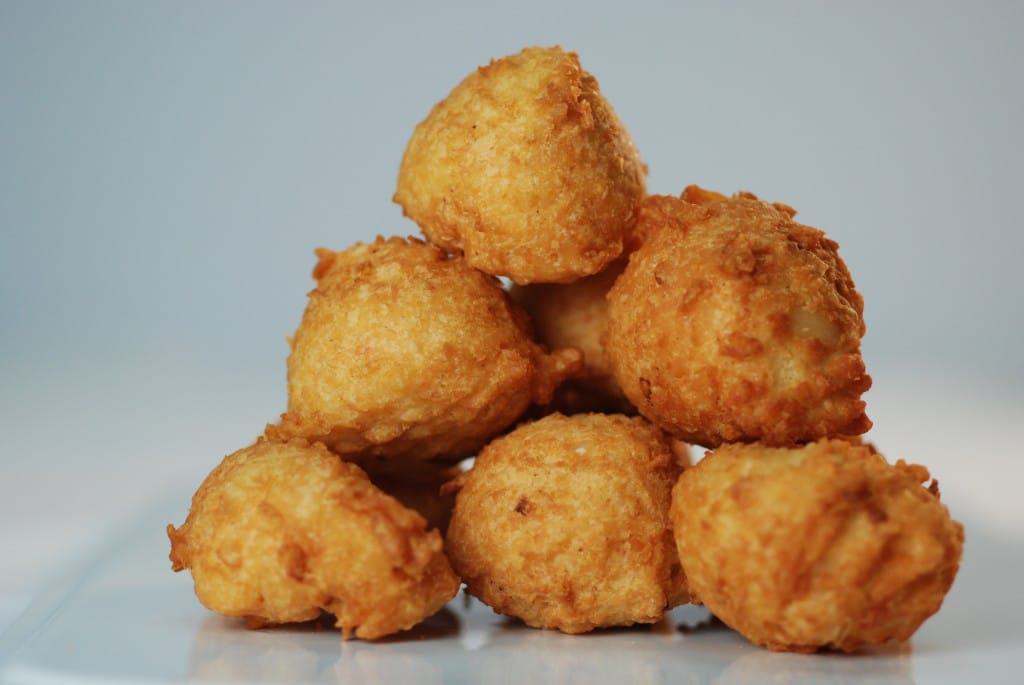 Ago Glain (served with rice)
(A dish of crabs cooked in tomato,
onion and peanut butter sauce) 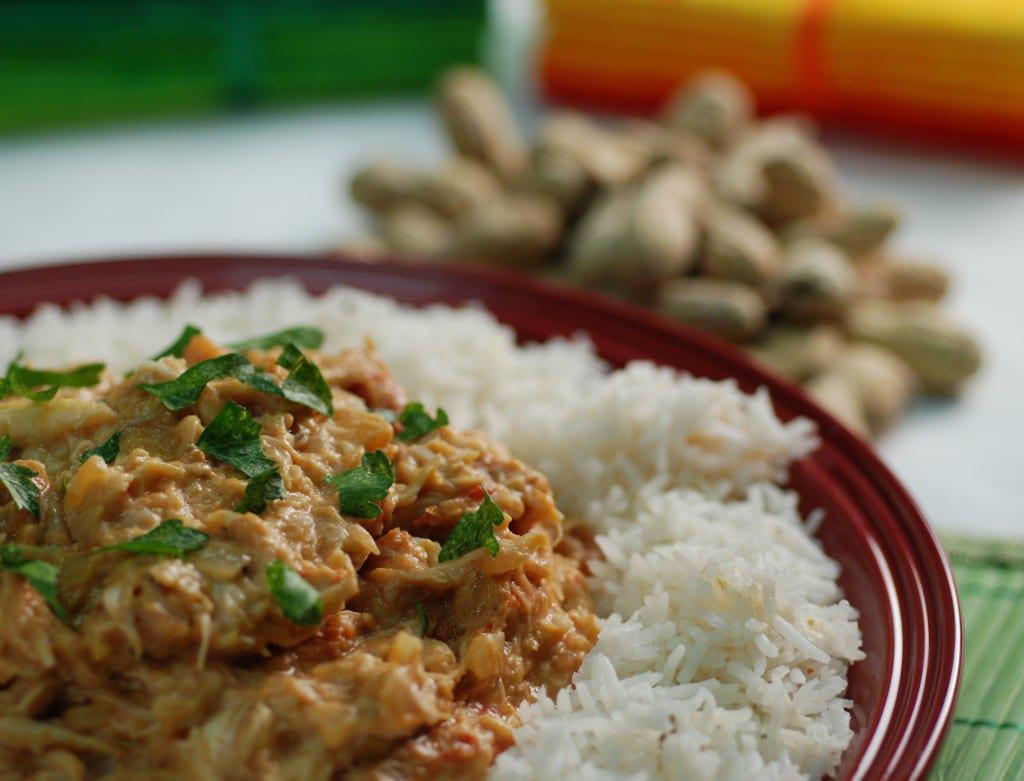 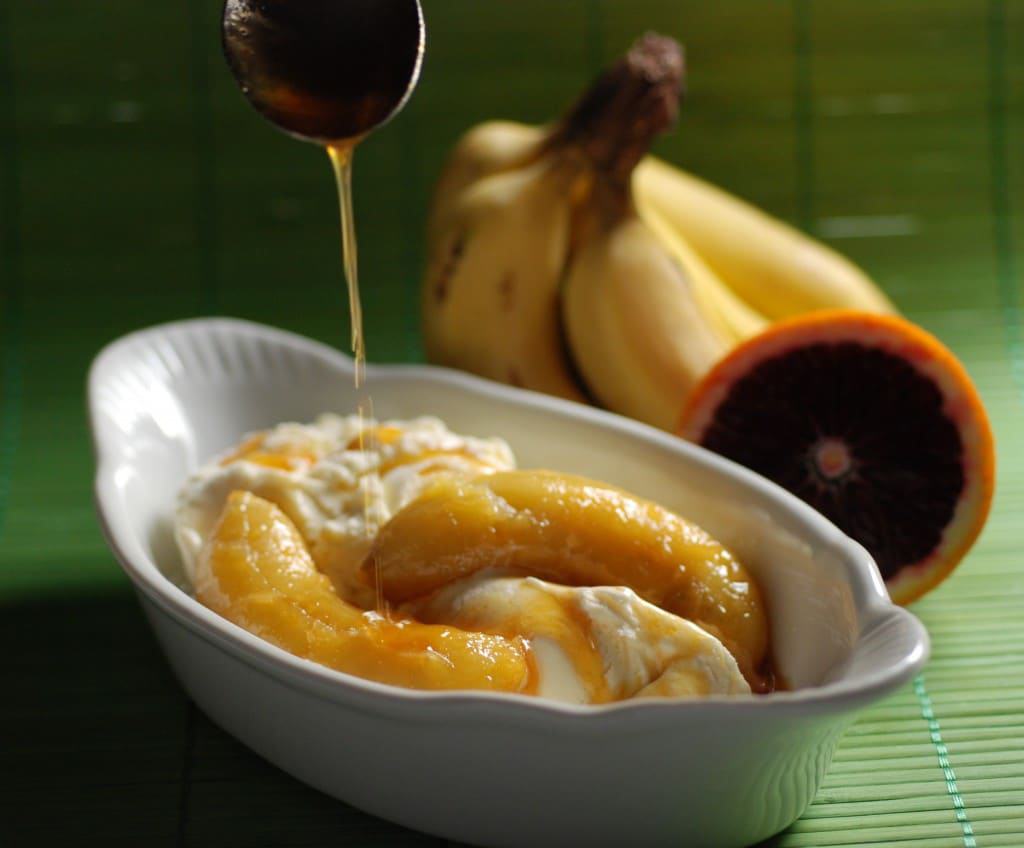 We turned on the music of Benin’s superstar, Angelique Kidjo, who graced us with her homespun, rhythmic beat. We set the table with beautiful cotton fabrics in the colors of the Benin flag; red, yellow and green.

We began the meal with the bean fritters, served up just after cooking, to optimize their crispiness. The palm oil added an interesting flavor as well. Of course we only ate with our right hand, as would be customary there.

The main course was crab, with a complement of tomato, onion and peanut butter (reminiscent of the side dish we had made from Angola.) It was a wonderful fusion of flavors.

For dessert, the warm baby bananas drizzled with a delicious blood orange sauce and served over creamy vanilla ice cream, was a lovely end to our Beninese meal.

There are many proverbs in Benin, which is a way for the elders to hand down wisdom to the younger generations. Historically, the proverbs would be illustrations, rather than written words. The proverbs of the kings were shown on top of their Asen (the metal poles they carried).

I leave you this week with a few of them:

The picture: a cat eating a fish.
Meaning: Do not employ a cat to sell fish.

The picture: Two birds trying to put their heads into a small pot.
Meaning: There can only be one captain of a ship.

The picture: an egg
Meaning: your words are like an egg, once they break you cannot take them back, so think before you speak.