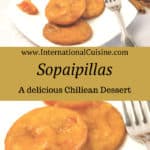 These Chile Sopaipillas are amazing and a true Chilean treasure. They are similar to a doughnut.  In Chile they are typically made with pumpkin or squash. I just used pumpkin puree from the can and the results were delicious. These would be wonderful for breakfast too! They also make a savory version that is typically served as bread with a meal and butter or pebre is spread on the top.

Sopaipilla's are famous all over Latin America.  In fact the word comes from the original Mozarabic language word Xopaipa which meant bread soaked in oil. There are many versions of this and it also goes by other names in different countries.  It is also called sopapilla, sopaipa or cachanga. Often times they are puffed bread made with just flour as opposed to the pumpkin or squash.

These Chile sopaipillas are absolutely delicious with the orange color coming from the pumpkin puree.  It is both sweet and savory and made for the perfect ending to our Chilean feast. They were served warm with a delicious thick sauce made of brown sugar, orange and cinnamon.

Did you know that Chileans love to eat and often will eat up to four meals a day?  They eat very late at night with dinner typically being served after 9:00 pm.  If you would like to learn more about this amazing country in South America, plus get some more delicious recipes, be sure to check out "Our Journey to Chile".

Craving even more?  Be sure to join the culinary and cultural journey around the world at, Internationalcuisine.com,  so you don’t miss a thing.  It’s free.  You can also find me on Instagram, Facebook ,  Pinterest and Youtube, to follow along on our incredible journey.

What is your favorite sopaipilla?  Sweet or savory?  Let me know in the comments below.