Iranian pomegranate and walnut chicken called fesenjan is an extremely popular dish and for good reason.  It is not considered the national dish but is a close second.  It is divine.  It’s sour notes from the pomegranate molasses is not easily forgotten.  This dish is easy to make and you will be a star for doing so.  We served it with jeweled rice however white rice is probably more common.  It can often times be made with lamb instead of chicken. The combination of flavors truly gives you a taste of Iran.  Enjoy! 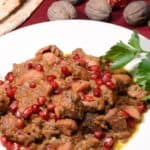 This can be served over white rice and with some naan bread. You can find pomegranate molasses at your local Middle Eastern store

How did eSwatini get its name? In 2018 Swaziland became known as the Kingdom of ...

END_OF_DOCUMENT_TOKEN_TO_BE_REPLACED

How did Suriname get its name? The earliest inhabitants were the Surinen ...