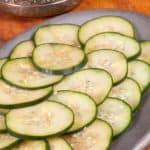 Swedish cucumber salad called pressgurka is a must-have side dish alongside Swedish Meatballs.  This easy to make little side dish adds a sweet and sour balance to the plate that is perfect.  The cucumbers are thinly sliced on a mandolin which is perfect for this task.  In Swedish, gurka means cucumber and press means to press or squeeze. 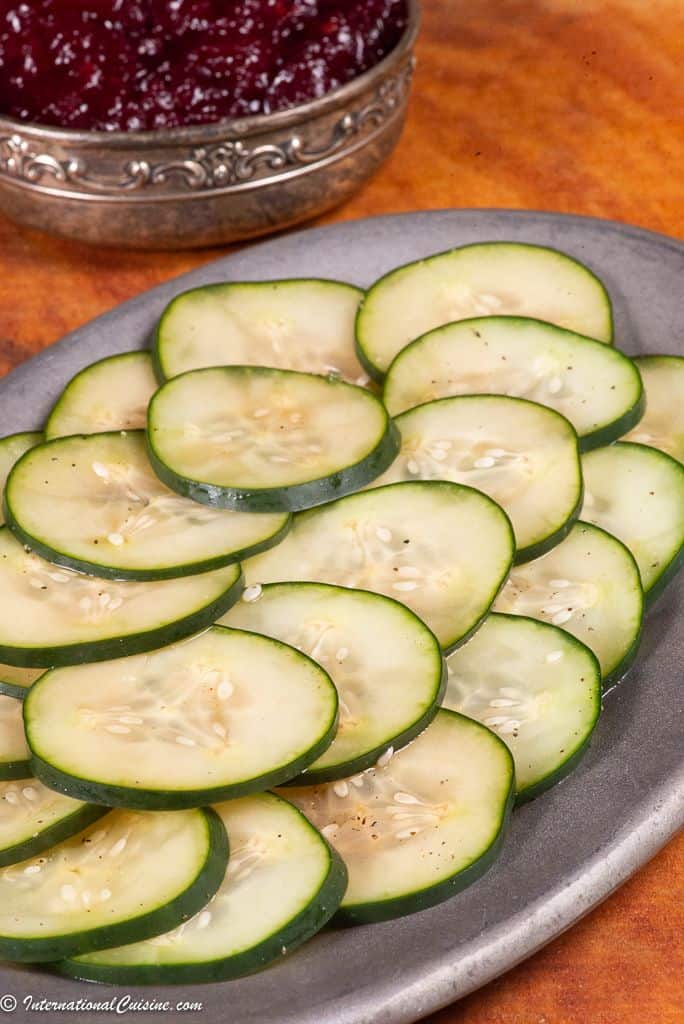 After you slice and press the cucumbers to remove the excess liquid, you put them in a sweet and sour mixture. By pressing the cucumbers, you remove excess liquid in the cucumber that then better absorbs the flavors of the pickling juice and is a crispier bite.  In Sweden, they use a much more potent vinegar called Attika.   You can get the more potent vinegar on-line here.  Typically, white vinegar in the states is only 5% whereas the attika pickling vinegar is 24% adding much more acidity.

This Swedish cucumber salad is a crisp and refreshing bite that would be wonderful as a side dish for just about any meal. Recipes differ with what seasonings are added to the pickling juice.  The common choices are parsley, caraway seeds, dill, and white peppercorns.  I used caraway seeds, and parsley,  it was lovely.

Make sure to plan ahead as you will need at least an hour for the cucumbers to sit in the pickling solution before serving.

Did you know that the capital of Sweden, Stockholm is often referred to as “the Venice of the North”?  This is because the city is built around water with 12 islands and 42 bridges.  Some say it is the most beautiful capital city in the world!

If you would like to learn more about this intriguing nation, be sure to check out “Our Journey to Sweden”.  There you can also find more authentic recipes like toast skagen, swedish meatballs and the best gooey chocolate cake called kladdkaka that I have ever had.