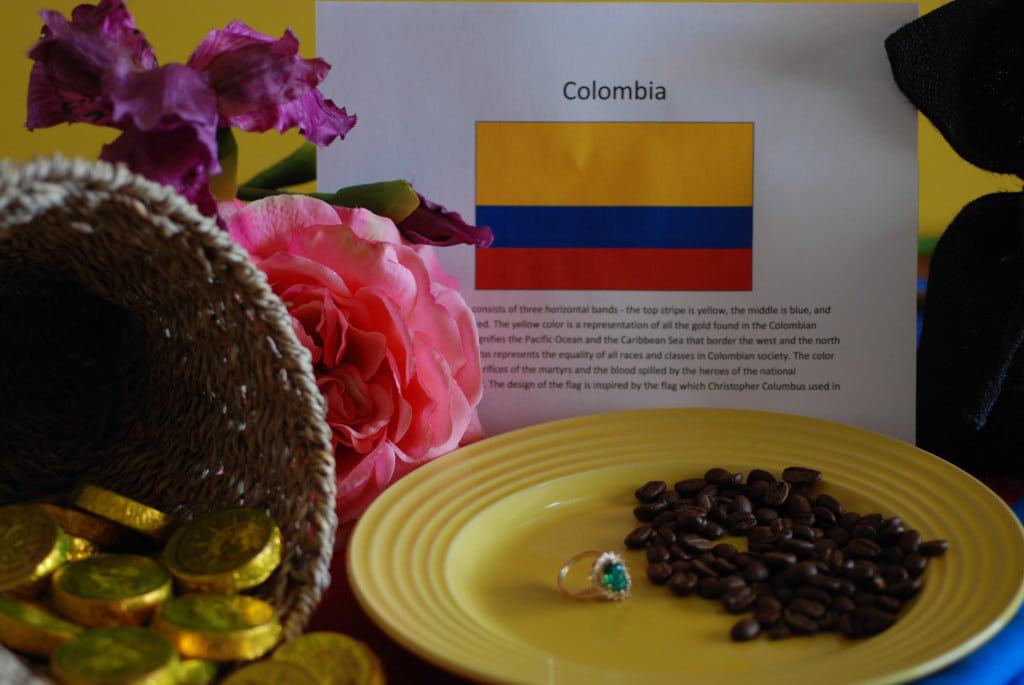 “Is this the bus to Cartagena?” Do you remember this line from the movie “Romancing the Stone”? It turns out the movie, one of my favorites, did a pretty good job showcasing the country of Colombia. Named after Christopher Columbus, she gained independence from Spain July 20, 1810. The road to independence and the years thereafter have not been easy for this beautiful country located in South America. Her neighbors are Panama to the northwest, Venezuela and Brazil to the east and Peru and Ecuador to the south. Colombia is the only country in South America that has borders on both the Pacific Ocean and the Caribbean Sea.

The country is home to the Andean Mountain ranges that run north to south. The eastern half of the country is low, with jungle covered plains and tropical forests. The western half of the country is home to fertile plateaus and valleys and is the most densely populated. Colombia is one of the world’s richest countries in water resources, having many rivers that serve as important drainage basins, including the Amazon. Colombia is known for its biodiversity. It is home to 13,000 varieties of flora and fauna as well as the most species of birds in the world; 1754 of them.

The majority population of Colombia is considered to be a mixed race, or mestizos. The remaining 20 percent is of European, African or Indian ancestry. The official language is Spanish, which was mandatory during the colonial period. Colombians take great pride in the purity of Castillian Spanish that they speak. The indigenous people, especially around the Amazon basin, speak their own native languages.

Little is known about the Indian tribes who inhabited Colombia prior to the Spanish arrival in 1510. The Spanish heard stories about a golden city called El Dorado and the quest began to find it. The Muisca, is one indigenous group in the Andes that had incredible gold working talents, unlike any other seen before. The hunt for gold is still on today and looting is a major problem. Unfortunately the quest is to find gold artifacts rather than to uncover the history. There are a few museums working to preserve that history and legend. However, it is these precious, pre-Colombian works of art that tell the true story behind the tales of El Dorado and they are rapidly disappearing.

Ninety five percent of the world’s emeralds come from the Boyaca state in Colombia, including the largest emerald in the world, found in 1967. It is called the Gachala Emerald, a whopping 858 carats and is now housed at the Smithsonian Institute in Washington D.C. It was donated in 1969 by the American jeweler, Harry Winston. (“Romancing the Stone” capitalized on this gem in the wild search for a priceless emerald in the Colombian jungles.)

The Spanish brought Africans to the country. Together the Africans and the Indigenous Indians were slaves to the Spanish. The Spanish also brought Catholicism to Colombia and Roman Catholics make up the majority of the population, at 90 percent. Many celebrations and festivals revolve around religious holidays. One of the biggest celebrations is “the Epiphany,” held on January 6th. They also have a very popular, Festival of Flowers, as they are the second largest exporter of fresh cut flowers in the world.

Everything has not been rosy for Colombia. She has been plagued with leftist rebels, far-right paramilitary militias and drug smugglers, some of which are notorious cartels, like the Medillen and Cali cartels. The Marxist inspired rebels, called FARC (Fuerzas Armadas Revolucionarias de Colombia), is the largest terrorist group in South America and has been waging war against the Colombian government for the past 40 years. Back in 1989, things were so bad that Colombia was declared one of the International centers for drug production and trafficking; providing 75 percent of the world’s cocaine. Homicide was listed as the leading cause of death.

In 2002, Alvaro Uribe of the Liberal Party, won the presidential election and within a week declared a state of emergency. He beefed up security forces, launched an aggressive campaign against the drug traders and was aided by Special Forces from the United States. He also entered into trade agreements, which have substantially helped economic development. Today Colombia’s homicide rate has greatly diminished, which has done wonders for tourism as well.

The cuisine in Colombia is as diverse as the country, with many regional differences. Some of the staple ingredients are rice, maize, potato, cassava, beans, and plantains. Meats most often used are beef, chicken, pork, and goat. Seafood of every variety is plentiful for those living along the coastline. Colombians pride themselves on their fresh and natural produce with organic farming widespread. Of course tropical fruits are abundant, with some varieties only found there. And we can’t forget Colombian coffee. Colombia’s coffee beans are sought after worldwide. Their richness will provide a soothing accompaniment to our meal.

So let us eat, Colombia style 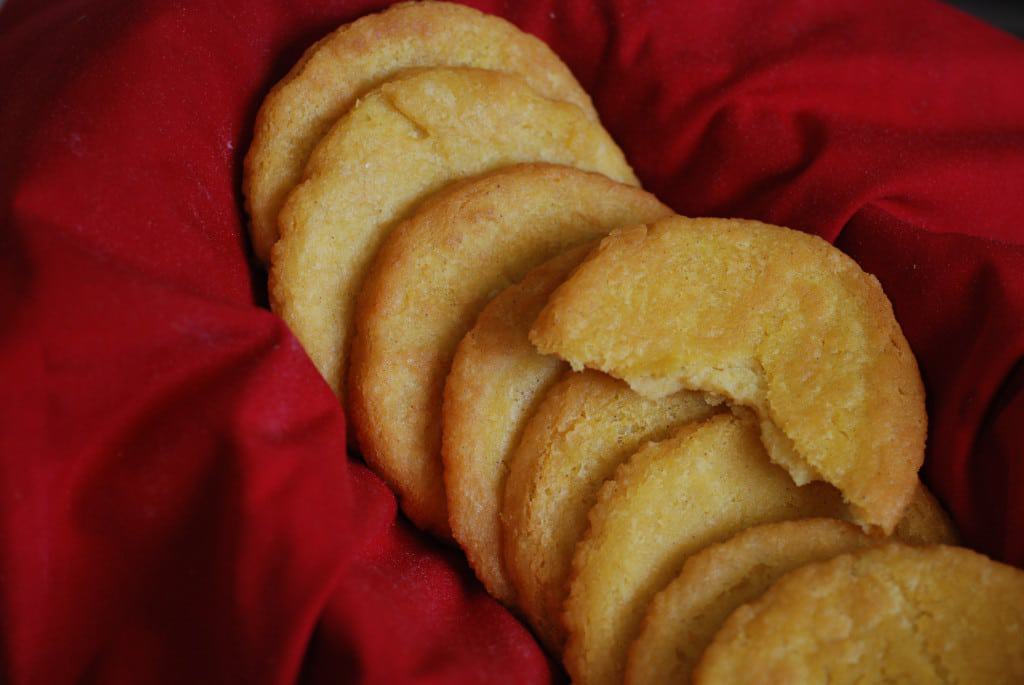 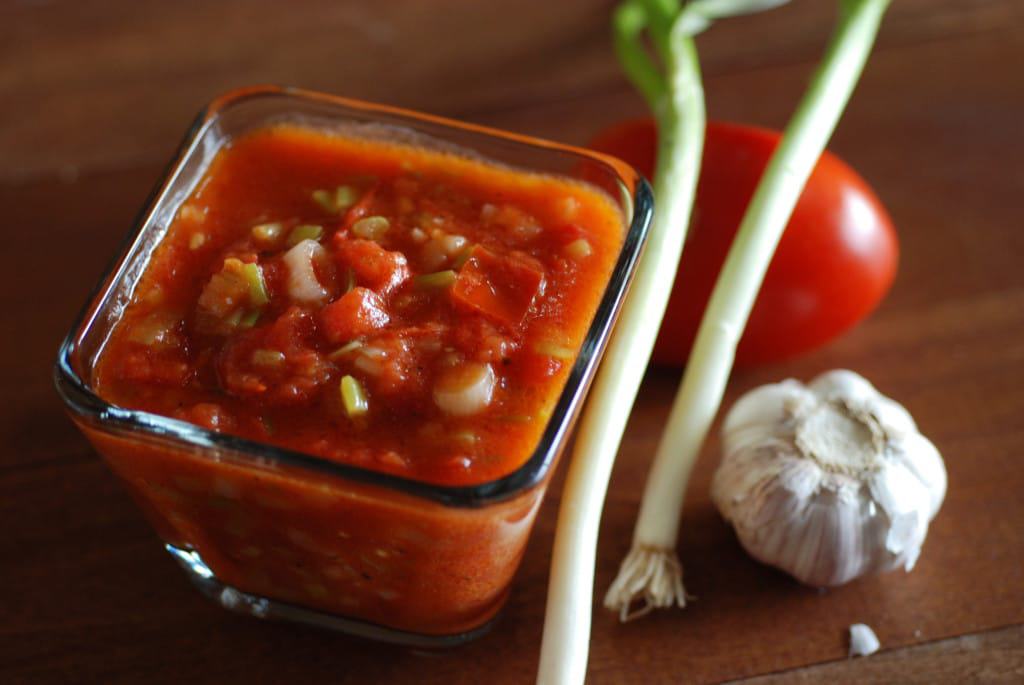 Main Course
Bandeja Paisa (a feast on a plate) 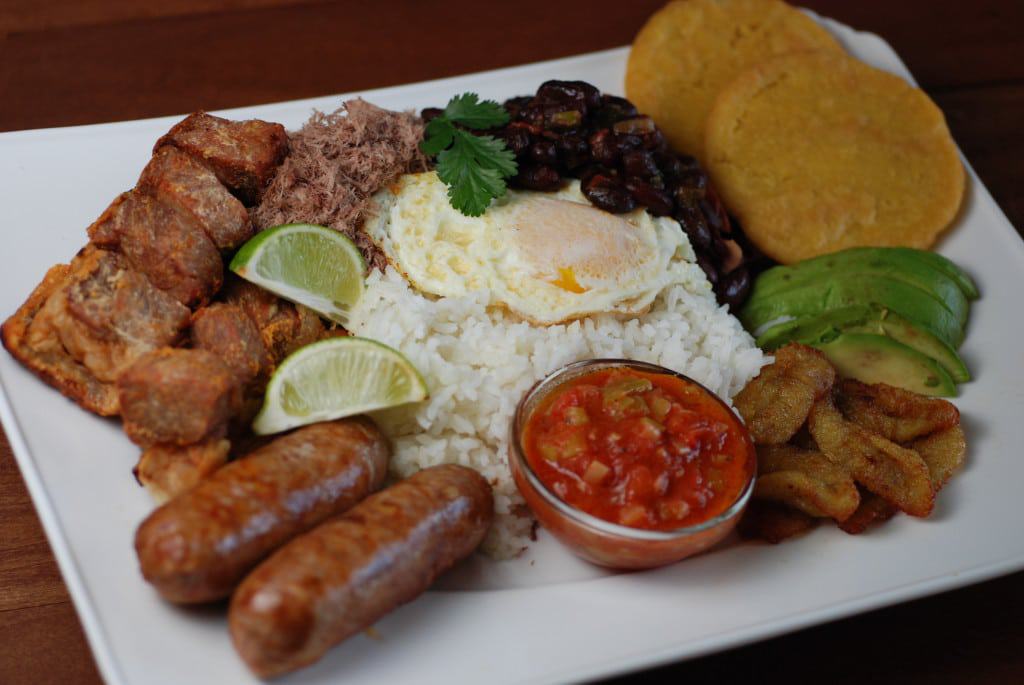 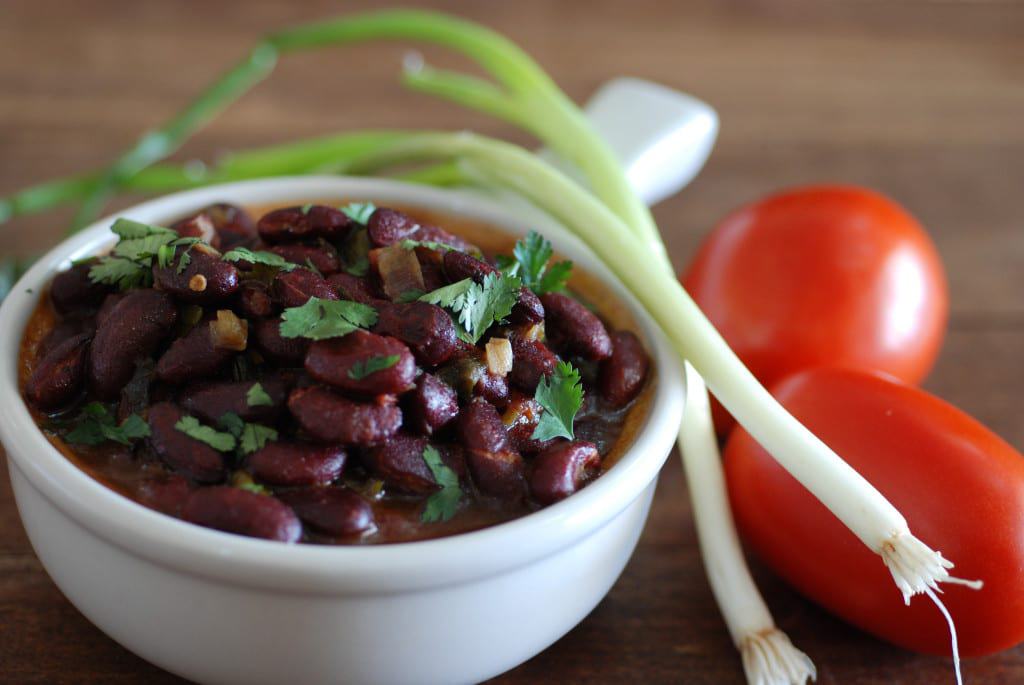 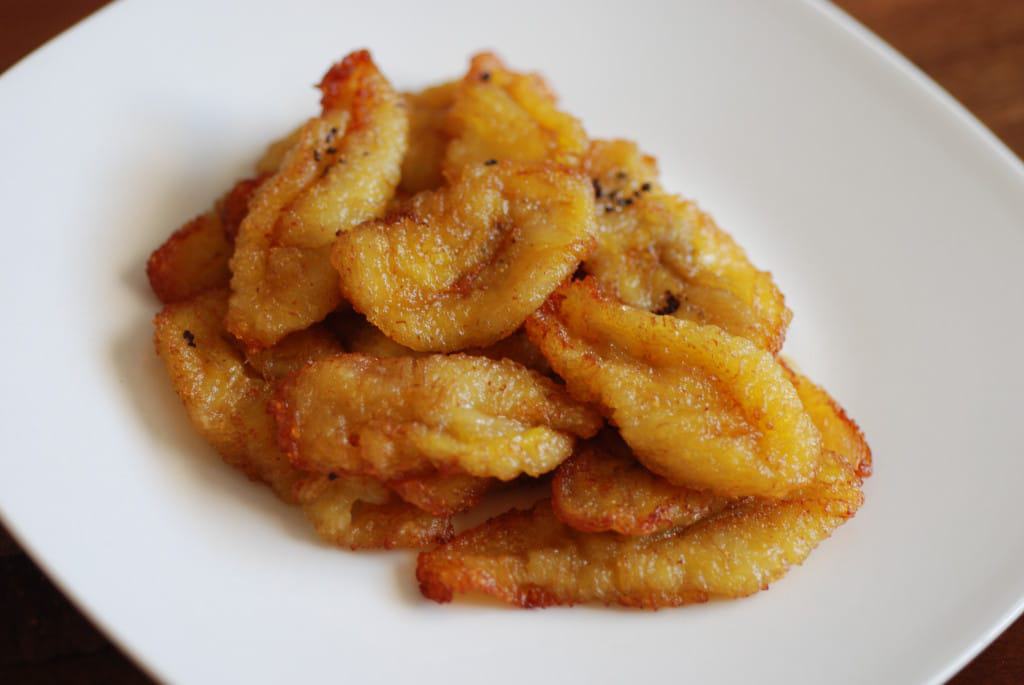 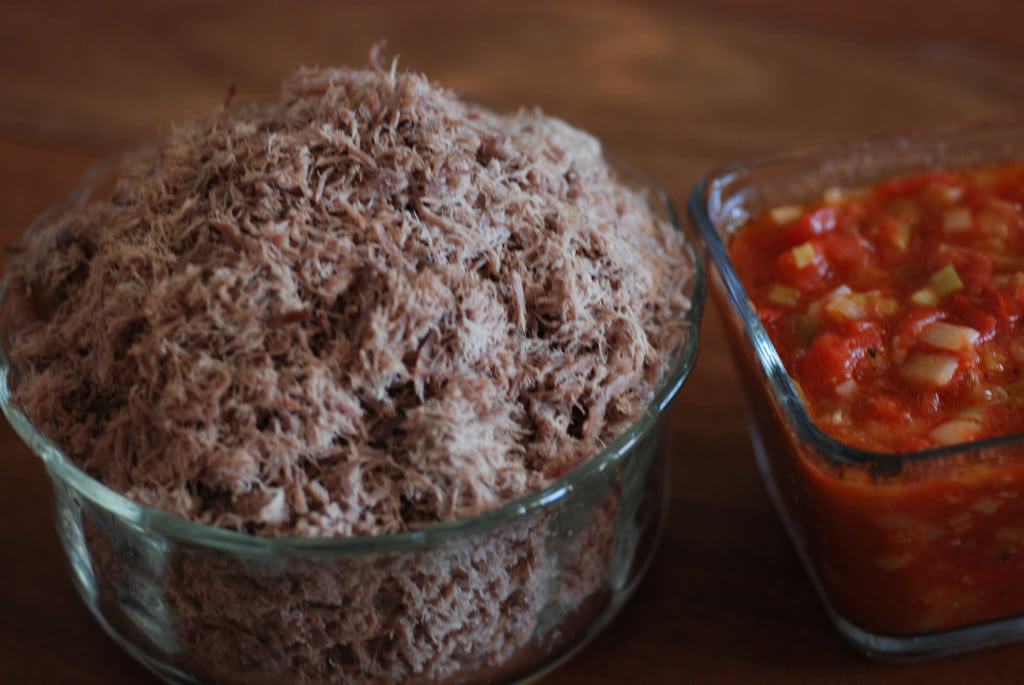 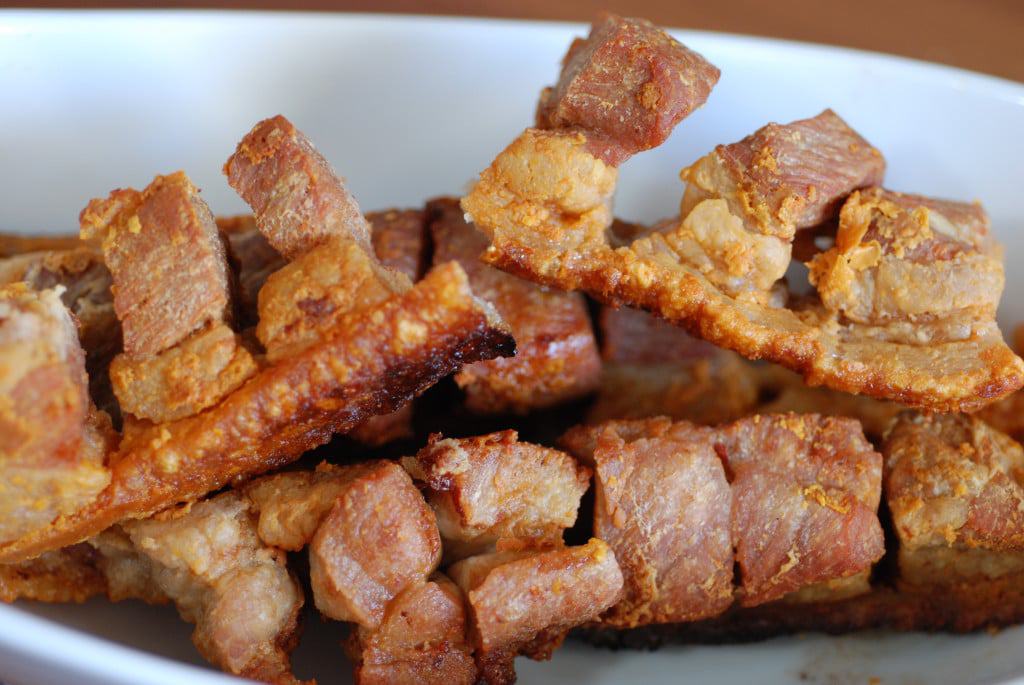 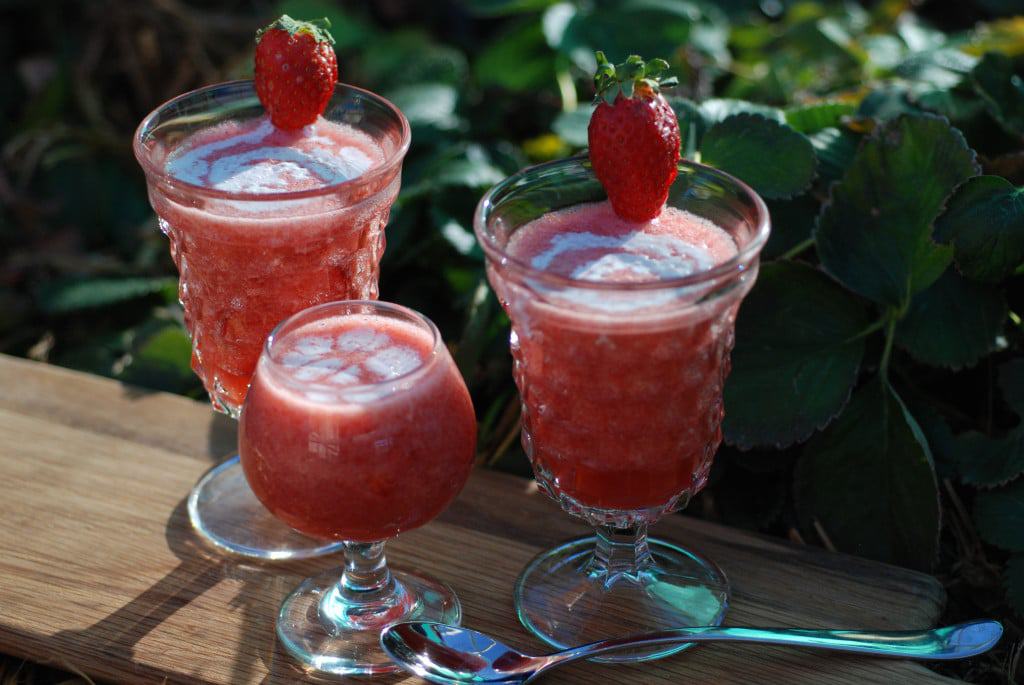 We decorated the table in the colors of the Colombian flag; yellow, red and blue. The design was said to be inspired by the same flag that Columbus used on his expedition. We put on some Vallenato music, a popular Colombian folk music. The meal was served all at once. The Arepa is a delicious corn meal bread and the recipe, (thought to have come from the Indigenous Indians) is found everywhere in Colombia. Also the sauce, called Hogao, is a condiment found on every Colombian table and became another new love of ours. This is a delicious sauce made of tomatoes and scallions with some spices (none hot) including cumin which is used in most all of their recipes. These accompaniments were served alongside the gigantic platter of food which contained the main dish called Bandeja Paisa. This is an assortment of individual items, all on one plate, which includes red beans, white rice, powdered beef, fried pork belly, fried plantain, served with an avocado and a fried egg. This is considered to be one of Colombia’s national dishes. Honestly this is an obscene amount of food on a plate. I guess this might be fitting for someone about to work some very long hours in the fields. You will be pleasantly stuffed after this meal.

After a short respite, we started up the movie “Romancing the Stone” as we enjoyed our dessert; a light and refreshing strawberry soup. It was awesome and a perfect ending to our Colombian feast.

Colombia is a spectacular country with a reputation for beautiful and talented women such as Sofia Vergara from “Modern family” and Shakira, the pop music superstar. Miss Colombia was just chosen and crowned as Miss Universe, 2015. But it’s not just these beautiful women who call Colombia home. She is also home to the world’s most stunningly, colorful river. Cano Cristales, known as the River of five colors or the Rainbow River, is a sight to behold if ever visiting there.

As we leave Colombia, we do so hopeful for their new found peace, cierto? (cierto is a word often added to the end of sentences in Colombia, which basically means, right?) Indeed.