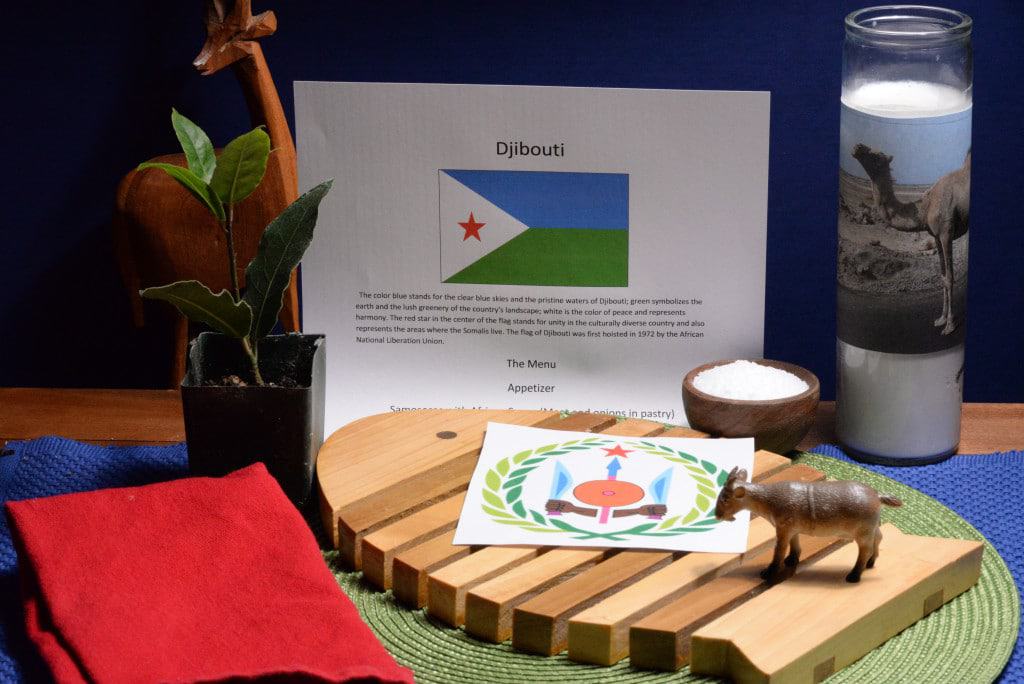 Djibouti pronounced (Ji-boot-ee) is the third smallest country on the African continent behind Gambia and Swaziland. She is located on the east coast of the Horn of Africa. Her neighbors are Eritrea to the north, Somalia to the south, Ethiopia to the west and Yemen is located across the strait of Bab el Mandeb, just to the east. The strait is known as the “Gate of Tears” due to the tricky navigational skills required to get across it. This strategic location separates the Red Sea from the Gulf of Aden and is an important trans-shipment location for goods entering and exiting the east African highlands.

Djibouti was formerly known as French Somaliland from 1896 until 1967, when it then became the French territory of the Afars and Issas, from 1967-1977. These two ethnic groups make up the majority of the population of Djibouti today. She became independent from France on June 27, 1977 which is celebrated each year as National Day. The official languages are French and Arabic, although Afar and Somali are more commonly spoken.

The climate is very dry with prolonged spells of scorching heat. They mainly have just two seasons, hot and hotter. May to September is the hottest season with daytime temperatures between 100 and 120 degrees F. Due to the weather and lack of precipitation, (receiving only a meager 5 inches per year), they really don’t grow much, so they always have a large trade deficit. They import nearly all of their food other than live animals. Even though the country sits of the strait, Djiboutians are not known as a seafaring people, but rather are descendants from nomadic and pastoral traditions. Goat and camel herds are prevalent in the interior of the country.

Due to Djibouti’s proximity to the Arabian Peninsula, it is believed that the region’s Somali and Afar tribes became the first Africans to adopt Islam. The country is an Islamic state and 94 percent are Muslim. The other six percent are Christians. Djiboutians are known to be tolerant toward other religions and social customs.

The capital city, Djibouti, bears the same name as the country itself and is where the majority of the population lives. The city was built on coral reefs and has views of the sea from much of the city. Djibouti does have a few islands off the coast which are known for their excellent diving and snorkeling areas.

The region is also known for its unique environment for studying volcanic, geothermal and earthquake activity. It sits over a zone where three tectonic plates converge. The area is very seismically active, with nearly 600 tremors per year. However, only a small percentage, if any, are felt.

Djibouti is also home to the lowest depression in Africa and the third lowest in the world. Lake Assal sits at 512 feet below sea level. The lake is ten times saltier than the ocean and is said to be an ethereal blue surrounded by picturesque volcanic hills. The salt has been mined for trading and export. A bit farther into the countryside lies another lake on the border with Ethiopia. Lake Abbe is in the center of the Afar Depression and is a UNESCO world heritage site. It is the location where the hominid skeleton named Lucy was found, even though Ethiopia gets credit for the land from which she was unearthed. This was a major discovery in the science of human origin. The skeleton has been dated back to 3.5 million years ago.

Djibouti is an important link and trade hub especially for landlocked Ethiopia. Aside from the international port facilities, another important source of revenue is the Addis-Ababa Railway. The railway was recently upgraded and is jointly owned by Ethiopia and Djibouti. This railway system is what delivers the daily supply of the mild stimulant called khat (or qat). Although many countries have banned khat as an illegal drug, Djibouti’s government continues to support the trade. The khat trade employs a tenth of the population and contributes a windfall to the government in taxes. Nearly all the men in Djibouti chew khat on a daily basis and it is considered an important part of the culture there. It creates a slight euphoria, suppresses appetite and increases concentration. Despite all this their unemployment rate is over fifty percent, which is often times blamed on this widespread khat use.

Djiboutians love soccer and also a game called Pétanque, which is somewhat similar to bocce ball. At night you will find them playing under the street lights, all over the city. Running is also a popular trend and some great marathoners have come from the region.

The cuisine of Djibouti is influenced by her neighbors and of course France. Middle Eastern spices ranging from saffron to cinnamon are commonly used and they like their dishes spicy. Djiboutians often eat three meals a day with the midday meal, called qado, being the largest. Schools and work places are often closed for a couple of hours in the afternoon when the sun is the most intense. Stews with meats from camel, goat and sheep are served with a flat spongy-like bread, called canjeero. Rice, lentils and pastas are also common dishes, served with a hot berbere sauce or a buttery one, called niter kibbeh.

The main celebrations are centered on religious holidays of the Muslim faith. Often whole animals are slaughtered for these special occasions. The feasts are typically “halal”, basically meaning that pork is forbidden and animals must be slaughtered by a Muslim in a certain way, while giving thanks to Allah. 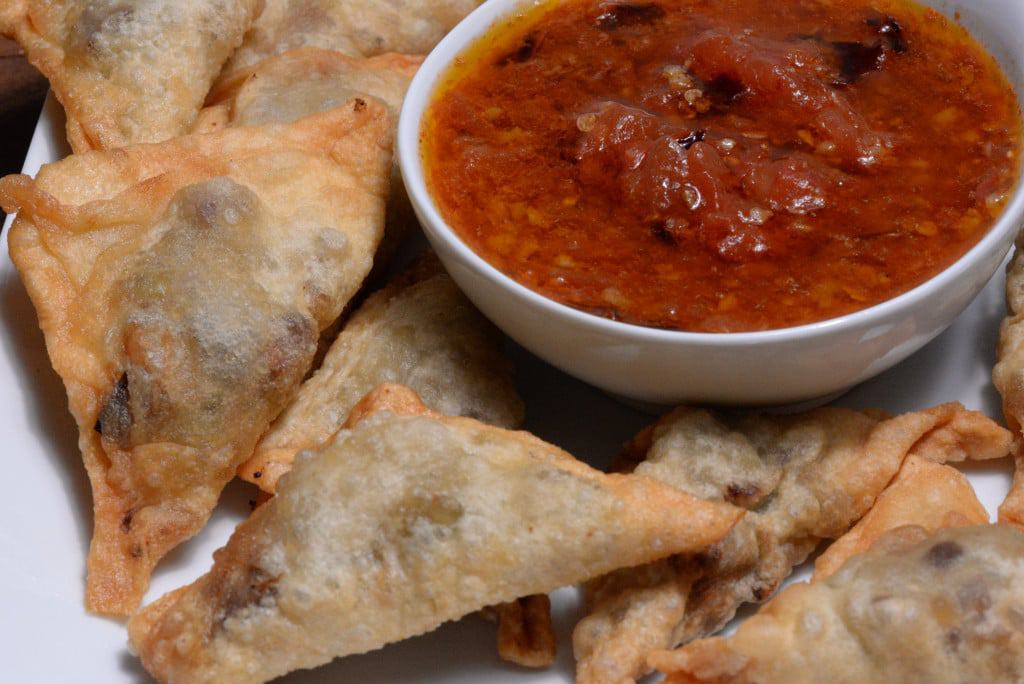 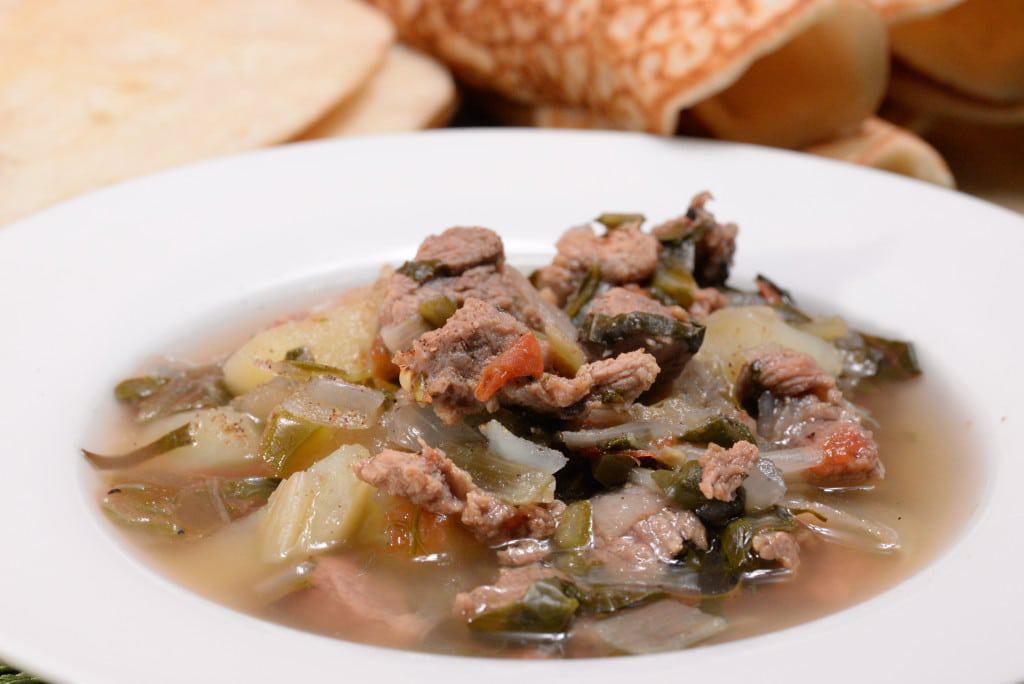 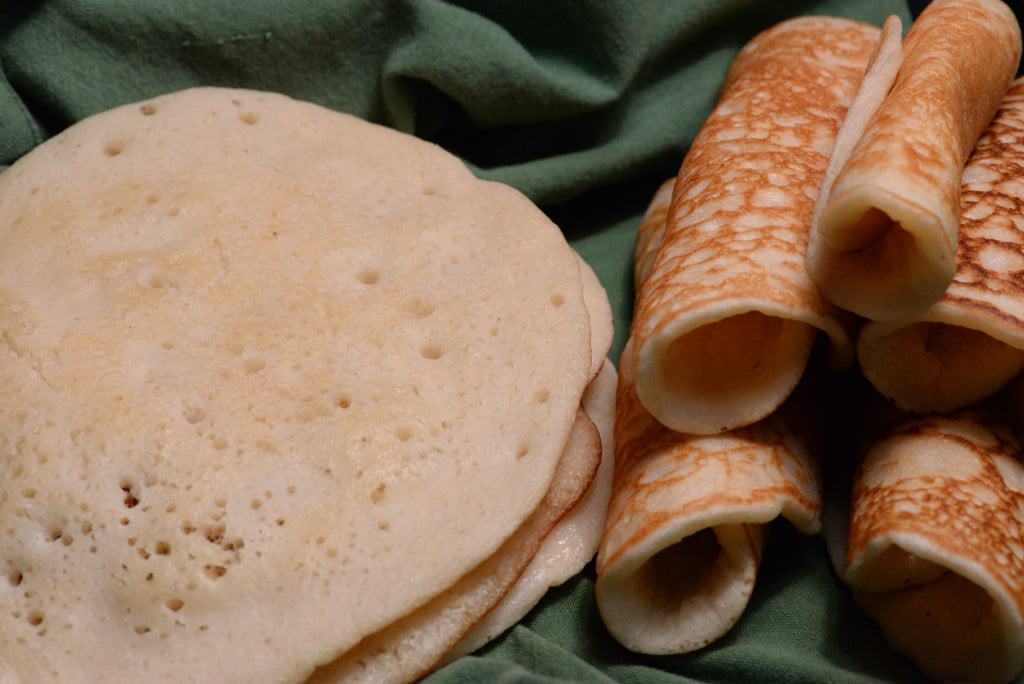 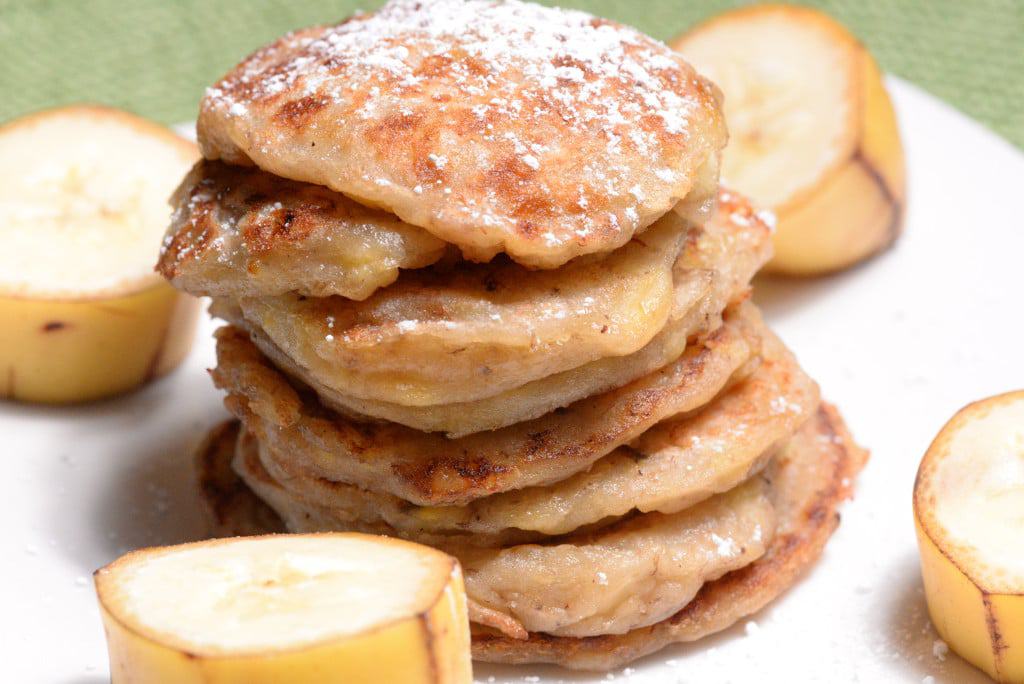 We decorated our mat with the colors of the flag: blue, green, red and white, along with the coat of arms, which represents the two major ethnic groups of Djibouti. We also had candles decorated with camels and a wooden carved antelope to represent the one forest they have remaining in the country. For our Djibouti meal we sat on a mat on the floor, which would be customary there. We began with a hand washing ritual, as we would be eating with our right hand, which is the tradition but taking care not to rinse off my temporary, henna tattoo, (extremely popular in Djibouti.)

The first course was our appetizer, called samosa. This is typically a street food and many other countries have a similar version. Our little fried pastries were made with meat and onions and dipped in a pepper sauce. They were superb.

Next was the main course called fah-fah. I was actually given a piece of goat meat as a gift from one of my neighbors to use for this occasion. The spicy stew was fantastic and if you have never had the opportunity to try goat, you should (assuming you are not a vegetarian.) It really is a delicious meat. I have another story about the best taco I ever ate that happened to be goat, but I will save that one for another time. The stew was served with canjeero, a very interesting flat bread that has a unique, spongy texture. It works well to sop up that scrumptious stew sauce but would actually be just as lovely with a little butter, honey or jam. It was yummy!

For dessert we enjoyed some banana fritters. Perhaps it seems I have been using a lot of bananas lately but hey, I love them and they did not disappoint; served warm and dusted with a bit of powdered sugar.

Until next week,
I leave you with a typical Djibouti greeting which is simply “Nabad” (Peace.)
Warmest regards,
Darlene