Guyana means, “The land of many waters”. It’s an Amerindian word, named by the indigenous people, who lived there, at the time it was discovered by the Spanish, in 1498. Home to the Warrou, Arawaks and Caribs, the land was not easily accessible, as it lies below sea level on the coast. The Dutch arrived in 1580 and began to set up trading posts. They made the land inhabitable using African, slave labor to build a unique system of canals, ditches and high-level waterways. Every square mile of cultivated land has 49 miles of these drainage canals and waterways. Today 90 percent of the population lives on this coastal belt.

Located on the northeastern side of South America, her border to the north is the Atlantic Ocean. Her neighbors are Suriname, to the east, Venezuela, to the northwest and Brazil, to the south and southwest. Guyana achieved independence from the British in 1966, after the British took the region from the Dutch in 1796. The British brought in more African slaves to work the sugar plantations, until slavery was finally abolished in 1834. This created a shortage of workers and resulted in thousands of indentured laborers coming into Guyana from India, Portugal and China. Due to its diverse population, British Guiana (as it was known) was referred to as “The land of six peoples.” Today the population is a majority of Indians and Africans, with the minority being of mixed race and only seven percent, the indigenous Amerindians. The people associate more with the Caribbean lifestyle than to South American. The official language is English and they are the only English speaking nation in South America. Of course, the Guyanese speak English with a bit of a creole flair.

Guyana is home to pristine, Amazonian rainforests, covering 70 percent of the land, providing immense waterfalls and amazing wildlife. One of Guyana’s biggest tourist attractions lies in the interior. Kaieteur Falls, along the Potaro River, is said to be the largest, single drop waterfall in the world. With a massive 741 foot drop (compared to Niagara Falls at 167 feet) and a width of 370 feet (during rainy season), it is one of the most awe inspiring waterfalls in the world. Aside from the size and force of the falls, it is the surrounding, untouched, pristine forest that makes the experience unlike any other on earth. The government is really taking strides to keep their amazing rainforests intact, while enticing tourists to the region with the slogan, “Guyana Undiscovered.”

Georgetown is Guyana’s capital and most populous city. Located at the mouth of the Demerara River, facing the Atlantic Ocean, it was an ideal location for the Europeans to access the Caribbean. The city is described as a fairy tale like setting, with tree-lined streets and quaint, Dutch and Victorian architecture. Although in need of repair, these old, wooden structures, with their large verandas, are a testament to their colonial past. The people of Guyana have a rich heritage and are said to be some of the most hospitable and friendly people in the world. If you take a bus, you will likely find yourself singing along to familiar, American pop songs, as it is a way the Guyanese like to pass their time while traveling.

Another interesting site to behold there is the men carrying bird cages. Inside the cage, is a bird called a towa towa bird, which is trained to whistle on cue. On Sunday mornings, men gather and have a bird whistling contests. The first bird to whistle 50 times, in the proper pitch and speed, wins the wager. These birds go up in value with every game won and can be worth thousands of dollars. They are a most prized possession, which is why you see them being carried all over town by their owners.

Guyana, like most nations after gaining independence, has faced challenges. Ethnic tensions, along with government corruption, have plagued the country. It is ostensibly, a parliamentary-style democracy. However, despite its democratic institutions, independent Guyana has seen several decades of a one-party rule and strongman politics. This is hopefully changing, as a new president, David Granger, was sworn in on May 26th, 2015. With the largest, voter turnout in history, he defeated President Donald Ramotar, who was vying for his sixth consecutive term. This election victory has prompted a multi-ethnic movement in the country and given new hope to the Guyanese people. A recent discovery of oil, just off the coast of Guyana, brings promise to the economy but also revives a century old, border dispute with Venezuela (who just ousted the ambassador of Guyana, over the issue, this past July.) The new President Granger is seeking intervention from the International Court of Justice to resolve the issue.

Aside from the recent oil discovery, Guyana has mineral wealth, with gold and bauxite leading the way. The Omai goldmine is one of the largest, open pit mines in all of South America. Rice, sugar, shrimp and timber are also very important exports for the country and account for a majority of the jobs in this poor nation. The new president promises growth and more job opportunities for the people of Guyana.

As we look into the cuisine of this nation, it is clearly a fusion of all of her inhabitants, both past and present. Chinese cuisine is loved all over (but with a Guyanese slant) as well as Indian food, with all types of curries and roti, being extremely popular. The national dish is called Pepperpot and made with a condiment called “cassareep.” This is a concoction developed by the indigenous people of Guyana to flavor and preserve food. Cassareep is a thick, black liquid made from the bitter cassava root and flavored with additional spices. You can get some by clicking here Pepperpot, which is made with meats and vegetables, is flavored with cassareep and typically prepared for Christmas. It can sit on the stove through New Year’s Day, to be enjoyed throughout the holiday season, still perfectly preserved. It is also said to be a hangover cure for those who celebrated with a bit too much rum during the festivities. Another extremely popular dish is called Cookup Rice. This is a one pot dish that is a local variation on the Caribbean rice and peas, and is one of the most often cooked dishes in the nation.

Local (ground) provisions are also staples of the diet, including cassava and sweet potatoes. Fresh fruits, vegetables and seafood are abundant along the coast. They like their dishes spicy and use a pepper, called a wiri-wiri pepper, in many of them. The wiri-wiri is different from the well-known African, piri-piri pepper and comes in at 350,000 on the Scoville Scale. It ranks right up there with a habanero or scotch bonnet, either of which can be used as a substitute and both of which, are incredibly spicy. 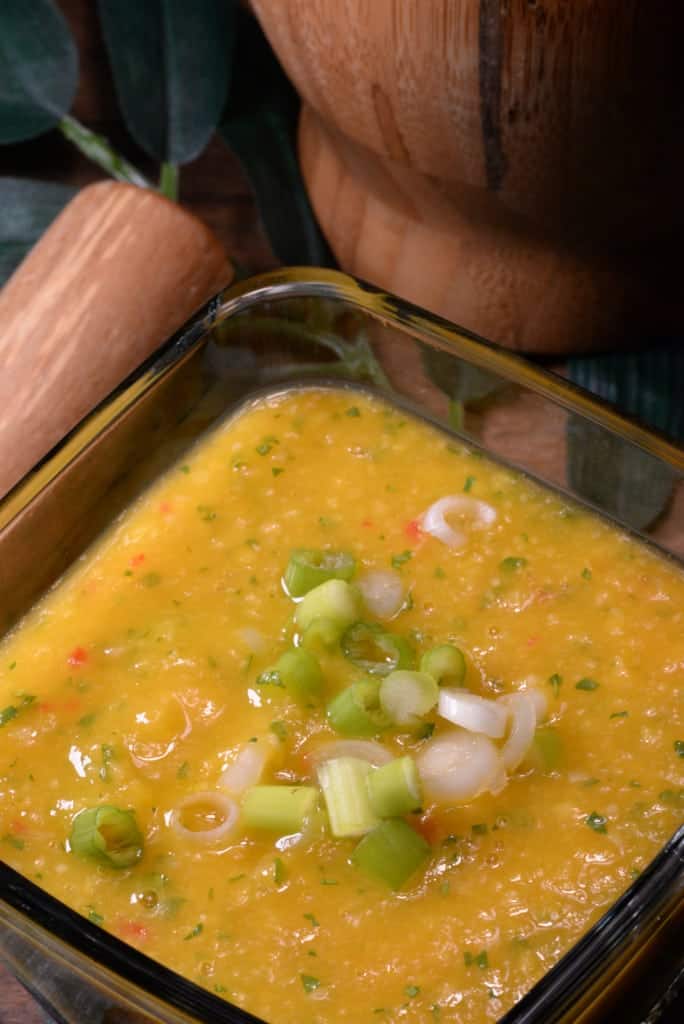 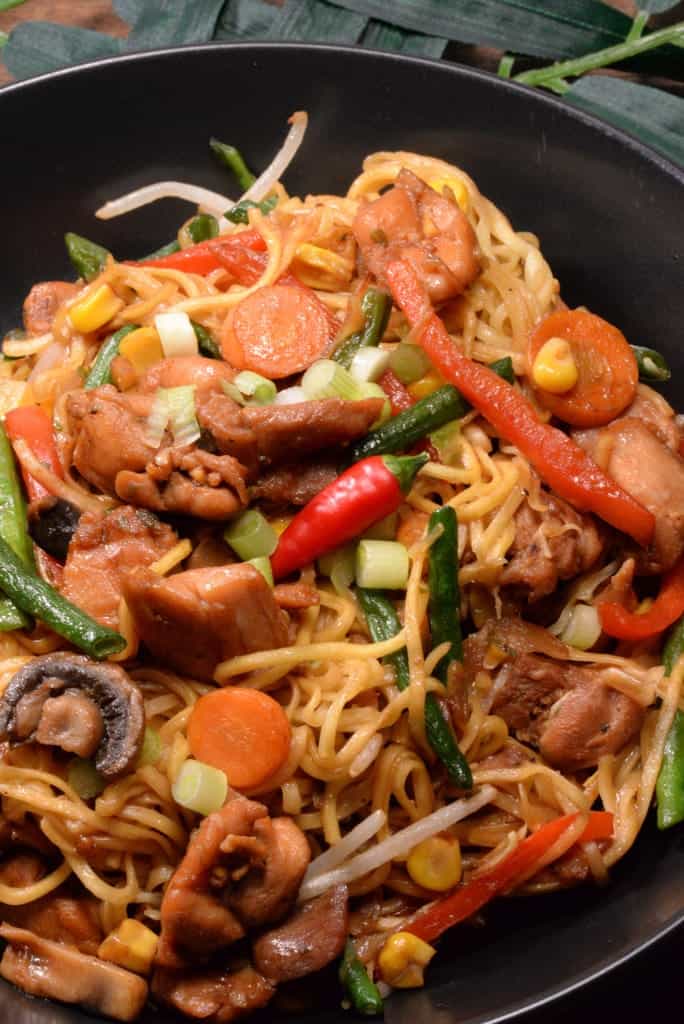 We set the table with all the colors of the Guyana flag; green, red, yellow, black and white, all of which have significant meaning to the Guyanese. The green color signifies the forest and foliage. Yellow depicts their mineral resource and bright future. Red symbolizes the vitality of the people while white depicts the rivers and black the endurance of the Guyanese people.  We also placed a candle with their coat of arms which also harbors many important symbols of the people. A Victoria Amazonica, more commonly known as a water lily, is the national flower. A waterfall fountain, to represent the “Land of many waters”, completed our setting and provided the soothing, sound of trickling water.

We ate continental style; fork in the left hand and knife in the right, as is customary there. Our first course was in honor of the Indian influence. Pholourie, is a delicious spice and curry flavored, split pea, fritter. Light and delicate, it’s an amazing treat, especially when dipped in the spicy mango sour; a big hit! The mango sour is made from green mango and counter balanced with lime, chili peppers, garlic and cilantro. This chutney would be awesome on so many things, provided you like it hot. It actually mellows a bit over time, so it can easily be made in advance. The Pholourie, however, is best right out of the fryer.

For our main course, we served the Guyanese-style, chicken chow mein. This Chinese, influenced, dish was awesome. Lots of wonderful flavors were created with the vegetables, tender chicken, spices and chow mein noodles. This will be a keeper in my repertoire.

We enjoyed our meal with a non-alcoholic, beverage called Lime Wash. Basically, this is a lime-ade, made from lime juice, sugar and a touch of vanilla; a delicious, refreshing drink that would be perfect on any hot summer day.

For our final course, we included a little of the British influence, with a wonderful, light and not so sweet, baked, vanilla egg custard. It was topped with nutmeg and was a lovely ending to our Guyanese meal.

After our delicious meal, we relaxed watching a television program, put out by the BBC, which reflects the biodiversity of Guyana, called, “Lost Land of the Jaguar”. Speaking of the lost land, Tepui, an amazing rock area in Guyana, is believed to be the inspiration for Sir Arthur Conan Doyle’s famous work, “The Lost World”.

Some things you may find useful:

Please note the links to products are for amazon and I receive a small commission for your purchase.  I only link to items  you may find necessary or helpful for your International cuisine meal.  Thanks for your support!