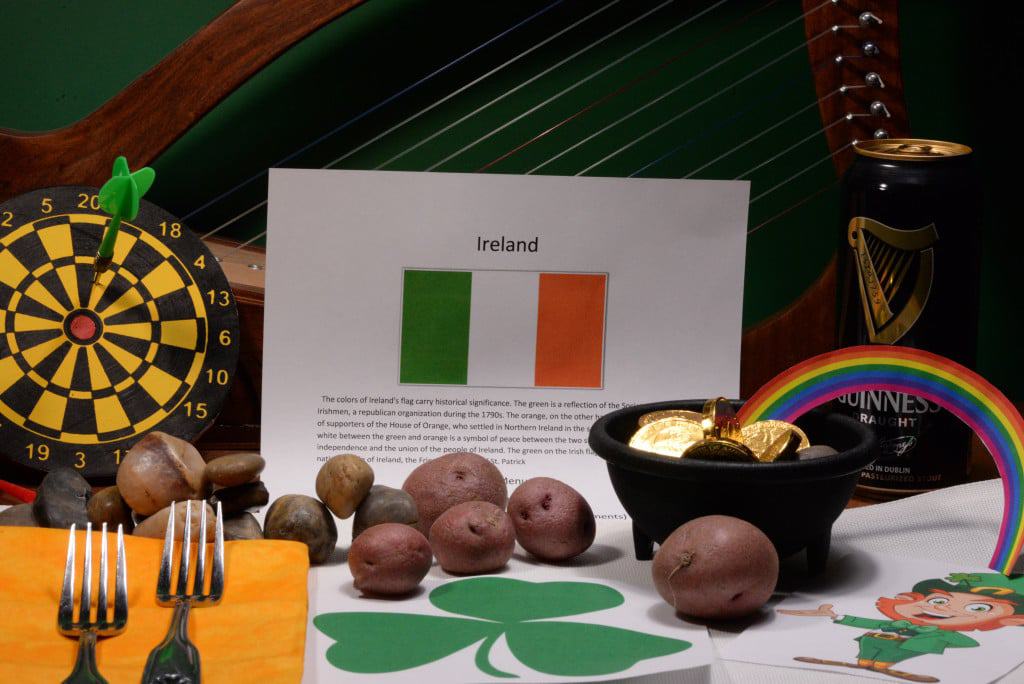 The Emerald Isle is what Ireland is called due to her spectacular, lush green, rolling hills and verdant countryside. She is also known for her incredible, craggy coastline with dramatic cliffs that plunge into the sea. The Republic of Ireland comprises 5/6ths of the island. Located in the Northern Atlantic Ocean, just west of Great Britain, her only bordering country is Northern Ireland, which is part of the United Kingdom. The name Ireland (or Eire) evolved from the old Irish word “Eriu”, the name of a Gaelic goddess, also known as the matron goddess of Ireland. The island was given several different names in the past. The Romans named her “Hibernia” a classic Latin name for Ireland, the Norse called her “Vestmannaeyjar”, which means “West Men” and the Scottish called her “Liarfhonn” or “Westland Isle.” Eire has been used on postage stamps since 1922, shortly after they gained independence from England, on December 6, 1921.

Ireland has a long and tumultuous past. Celtic tribes arrived on the island, between 600 and 150 BC. They fought invasions from the Norseman and then Norman invasions, which lasted for seven centuries in an Anglo-Irish struggle. The” Great Famine”, which lasted three years from 1846-1849, was caused by a blight that destroyed the potato crop upon which the Irish peasantry depended for food. Two million Irish emigrated due to the famine and over a million died, depleting the Irish population by one-third.

After gaining Independence from England in 1921, unresolved issues in Northern Ireland erupted into years of violence known as “The Troubles” that began in 1960. Thanks to the Good Friday Agreement, in 1998 Ireland began a new phase of cooperation between the Irish and British governments. After that time, Ireland saw an economic boom, that is until 2008, when Ireland suffered a complete meltdown of its financial system. I am happy to report that after severe austerity measures, Ireland is recovering. Today Ireland is home to many of the world’s largest corporations, as they have sought foreign investment and have a very low corporate tax rate of 12.5%, making it a safe haven for many companies.

Ireland’s population is 85% Irish and 10 % white and the balance a mix of Blacks, Asians and others. They have two official languages, English and Gaelic (Irish). About 40 percent of the population speaks Gaelic (mostly on the western coast) but English is the predominant language. Eighty-five percent of the population is Roman Catholic and although the church used to hold a “special position” in politics, the Catholic Church was deleted by a referendum and the Irish constitution now guarantees freedom of religion.

Saint Patrick, a missionary who spread Christianity to Ireland, is the most recognized patron Saint of Ireland. Saint Patrick’s Day is celebrated in many places around the world. In the United States, where it is a day to enjoy a pint of green beer and grand revelry with Irish music, in Ireland, it is more of a holy day. Saint Patrick is also responsible for the shamrock being a symbol of Ireland. It is customary to wear green or shamrocks on Saint Patrick’s Day (in the US you will get pinched if you don’t wear green.) St. Patrick is said to have used the three-leaved plant to explain the holy trinity to the pagan Irish. He died March 17 and that is the day that his sainthood is celebrated.

Another symbol of Ireland is the harp. It was found on early Christian stone crosses from the eighth and ninth centuries. Arthur Guinness started brewing ales in 1759 in St. James Gate Brewery in Dublin. He signed a 9000 year lease at 45 pounds per year. The first brew was called Harp and it has been a logo for the world renowned Guinness ales ever since. The harp has been used on flags and currency in the country over the centuries and remains an important symbol of Ireland today.

Speaking of ales, pub life in Ireland is an integral part of the culture. There is one pub per 100 people. Ireland is also known as the land of a hundred thousand welcomes and deserves this reputation. The Irish people are so kind, you will be awestruck. If you are lost, they may well drop what they are doing and personally guide you to your destination. You will never feel alone in Ireland as someone is always willing to “chat you up.” The gift of gab is known about the Irish. Legend has is that there is a stone that was very difficult to reach, which was placed atop the Blarney Castle. If you kiss this stone, the stone endows the kisser with the gift of gab. For over 200 years, world’s statesmen, literary giants and legends of the silver screen, along with millions of ordinary folk, have made the trek. You must hike to the peak of the castle where one person after another will lie down on their back and bend their head backwards over the parapet’s edge and daunting drop below, to kiss the Blarney stone and receive the gift of eloquence.

Castles abound in the beautiful landscape of Ireland but there is one castle that dates back to the 13th century that is now a luxury resort, once owned by the Guinness family. The Ashford Castle has been named the world’s best hotel by travel agents around the globe and has been visited by royalty, presidents and celebrities. The Ashford Castle, one of Ireland’s oldest, is set on 350 acres of stunning land in western Ireland at Cong, on the country’s second largest lake, the Lough Corrib. The Castle just underwent a 50 million dollar renovation and is a place to enjoy the acclaimed Irish hospitality, including falconry, golf, hiking, boating and equestrian activities. After a gourmet dinner, you can enjoy an Irish sing-a-long, in the castle bar, called the Dungeon, with Annette, (if you are lucky.)

The Irish are big consumers of beer, not surprising considering how important the pub culture is to them. They rank sixth in the world in beer consumption per capita. They also love their renowned Irish whisky. The pub is not only a place to enjoy a pint and to socialize, perhaps partake in a game of darts, but also to listen to music. All types of musicians playing all sorts of instruments, (many of which you probably haven’t seen before) are heard in the pubs throughout Ireland and they encourage newcomers to join the jam session that can last well into the night.

Music is an integral part of Irish life, in both song and dance. Irish music has many different genres but they are most known for drinking songs and ballads, sung and accompanied by a variety of instruments. Dance music includes reels, hornpipes and jigs. But top selling Irish acts like U2, Enya, Van Morrison, the Cranberries and the Corrs, range from rock, soul and pop are extremely popular all over the world.

As we look into the cuisine of Ireland, it has not had the best reputation for food in the past, although things are rapidly changing. Many top chefs are incorporating the old cuisine with the new, and it is becoming a rising star in the culinary world. Ireland, being an island, takes its recipe cues from the crops farmed and animals that grown in their temperate climate. Potatoes were introduced into Ireland around the 16th century and eventually became the staple crop of the poor. The Irish are known for their dairy products, especially cheese and butter. Meat, especially beef and lamb, are used and loved in stews with other root vegetables. Seafood, particularly shellfish, is popular in coastal cities and salmon and cod are two of the most common types of fish eaten. The capital city of Dublin is where the first fish and chips were sold in the 1880s. Soda bread, a yeast-free bread, along with brown and potato bread, are enjoyed with most meals.

So let’s enjoy an Irish meal: 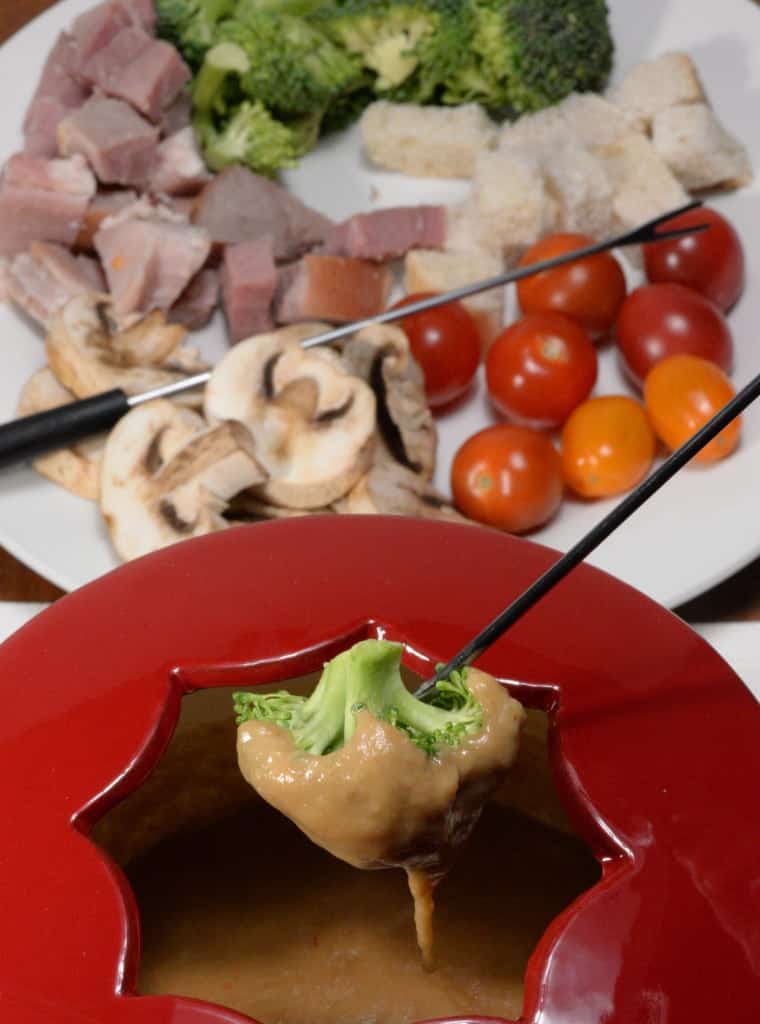 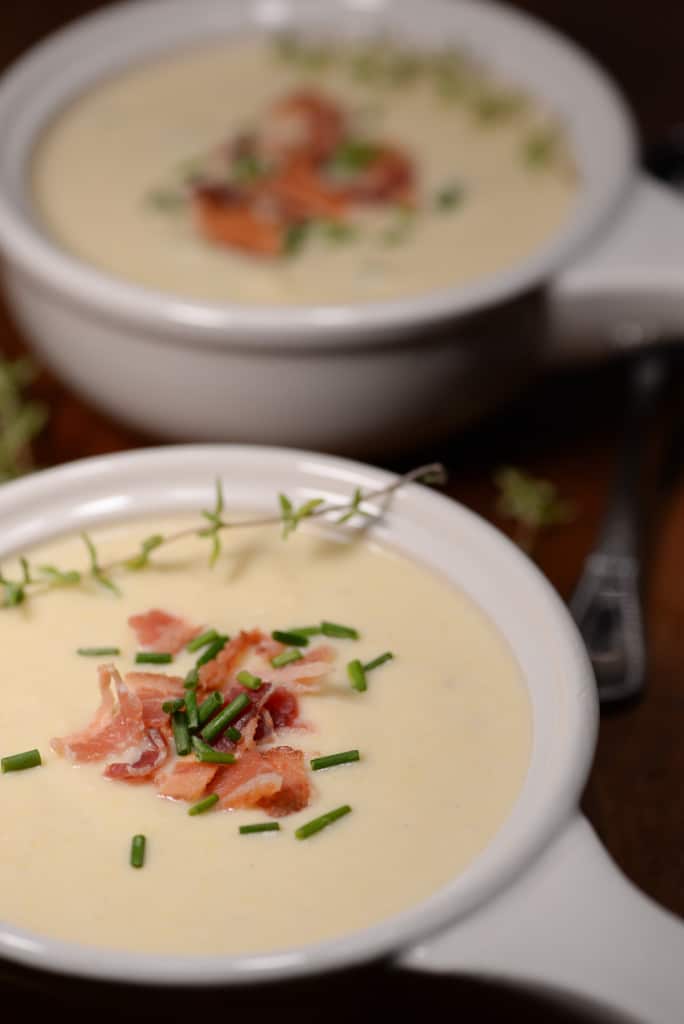 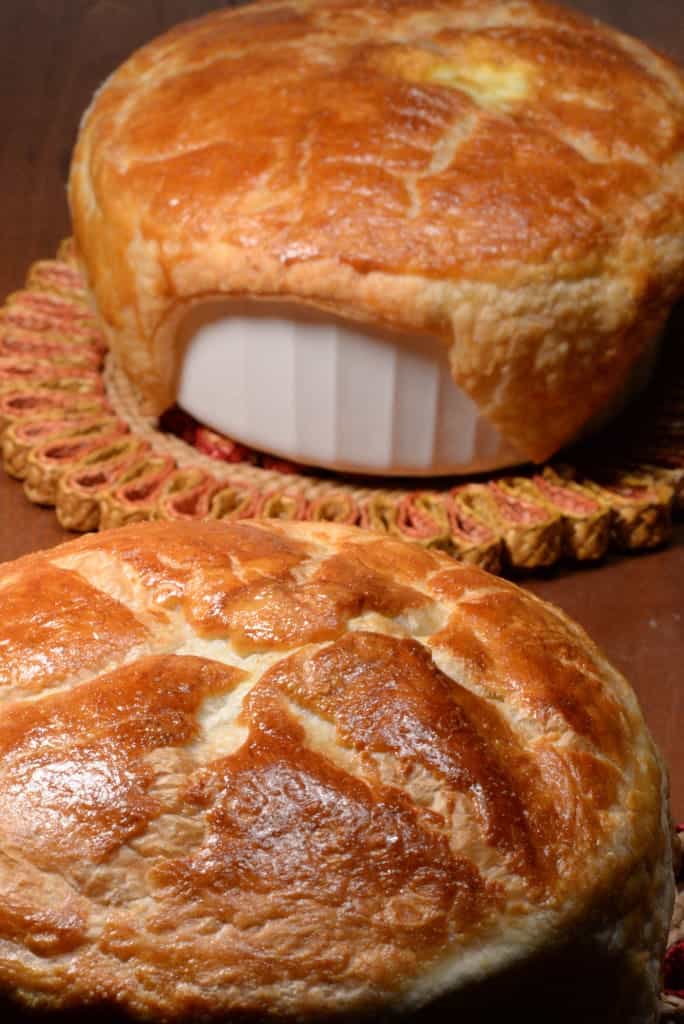 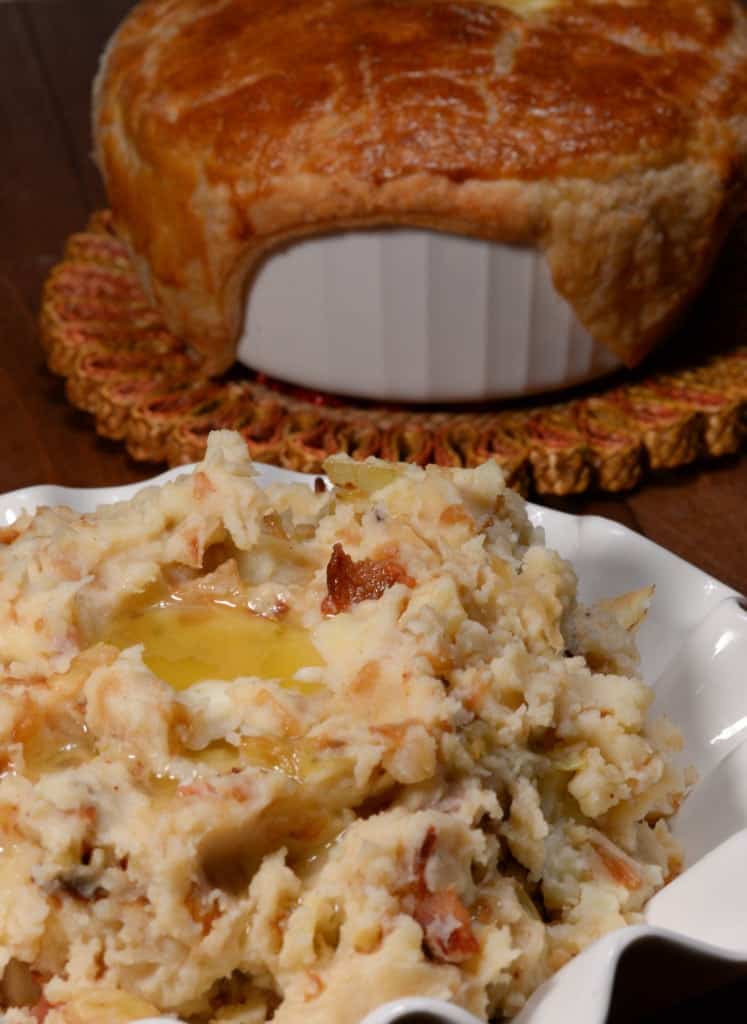 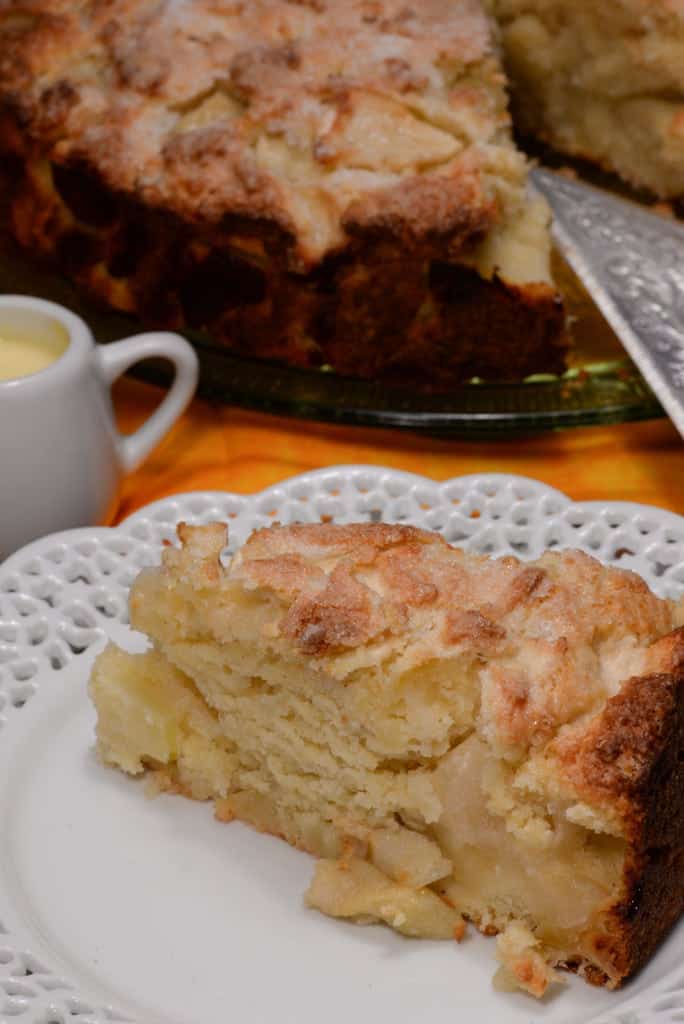 We decorated the table with colors of the Irish flag; green white and orange. We placed a harp as the centerpiece and added an array of shamrocks with a leprechaun and pot of gold at the end of the rainbow. Irish legend says that leprechauns (also known as wee folk) have pots of gold hidden across the Irish countryside. To protect the leprechaun’s pot of gold, the Irish fairies gave them magical powers to use if ever captured by a human or animal. It is believed that if you are lucky enough to catch a leprechaun, he’ll grant you three wishes in exchange for his release, but be careful what you wish for, the wrong one can result in a lifetime of bad luck.

We put on some good Irish folk music and made a toast with Guinness.
“May you have all the happiness and luck that life can hold.
And at the end of all your rainbows may you find a pot of gold.”

Our first course was an Irish stout fondue. Fondue is always a fun appetizer. It was made with Dubliner cheese, sharp white cheddar and served with a nice cup of stout. We dipped broccoli, mushrooms, bread and ham into the luscious, melted cheese and it was delicious. Potatoes and brussel sprouts would also be wonderful. The options are really endless; nearly everything dipped in cheese is good, isn’t it?

For the soup course, we had an amazing potato and leek soup. It was rich and creamy and served with brown bread. (This would make a lovely lunch meal by itself.) It was also excellent as a leftover, served cold. This soup, garnished with a few bacon bits and chives, is a real keeper.

For the main course we savored a wonderful, Guinness meat pie. The meat was braised in the Guinness beer, which resulted in a very tender meat in a rich gravy. The puff pastry pie was extraordinary. We served it with a very traditional and popular side dish called, colcannon. This is mashed potatoes with cabbage and onion, cooked until tender in a bit of bacon fat. (Yes, it has bacon too.) It was a perfect accompaniment to the meat pie.

For dessert we had Kerry apple cake, smothered in a custard sauce. It was amazing. Surprisingly light, the apples gave the cake a perfect light and crisp texture, with a lovely sweet flavor. After we each enjoyed a piece, I insisted my husband take the remaining cake over to a friend or I was afraid I would have devoured the whole thing, simply outstanding.

We both loved our Irish meal; it was very hearty and definitely one for the meat and potato lovers out there. As we say goodbye to Ireland, I leave you with another Irish toast:
“Wherever you go and whatever you do, may the luck of the Irish be there with you!