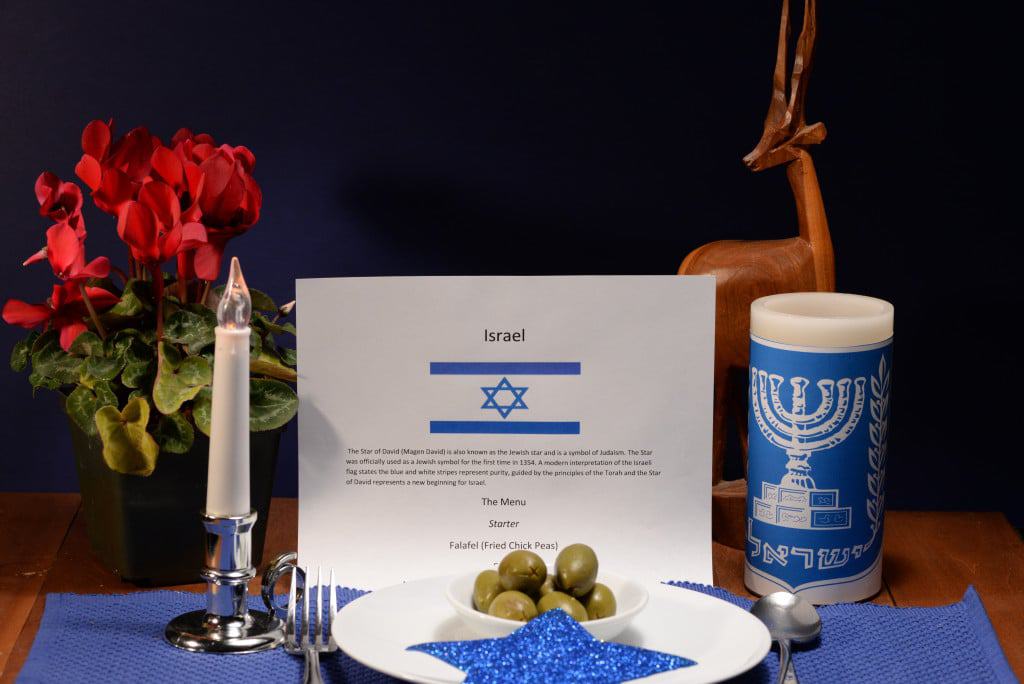 Israel, often referred to as the Promised Land, the Holy Land, the Land of Canaan and Palestine, is home to some of the most cherished religious sites in the world. According to the Bible, Israel is the name God gave to Jacob. Jacob was renamed Israel after he battled with God and won. “Thy name shall be called no more Jacob, but Israel: for as a prince hast thou power with God and with men, and hast prevailed.” (Genesis 32:28)

Israel, located in the Middle East, is bordered by Lebanon to the north, Syria to the northeast, Jordan to the east, Egypt to the southwest and the Mediterranean Sea to the west. She is home to mountains and plains, fertile lands and desert. The climate ranges from temperate to tropical, with plenty of sunshine. They have two main seasons, a rainy winter period from November to May and a dry summer season for the other six months. Israel is not very big; only 290 miles long and 85 miles across at the widest point.

Israel is home to just over eight million people. Eighty percent are Jewish and the balance are mainly Arabs. The capital city is Jerusalem, its most populous city, however it is not recognized as the capital by the United Nations, because Israel’s sovereignty over Jerusalem is in dispute. Most embassies are located in the financial and technological center of Tel Aviv.

Israel is complicated, to say the least. On November 29, 1947, the United Nations assembly recommended a Partition Plan, for what was then known as Mandatory Palestine. The plan specified borders for New Arab and Jewish states, however Jerusalem would be administered by an international regime. The head of the Zionist movement, David Ben-Gurion, declared the establishment of the Jewish State of Israel at the end of the British Mandate for Palestine which was set for midnight on May 14, 1948. It was up to the British to implement the mandate, as they controlled the area since World War I and the collapse of the Ottoman Empire. The borders however, were not specified in the declaration, because the Palestinians did not agree to a separate state. Literally the next day, Israel was invaded by neighboring Arab armies. Israel has since fought several wars with neighboring Arab states, which has resulted in the Israeli occupation of the West Bank, the Sinai Peninsula, part of South Lebanon, the Gaza Strip and the Golan Heights. Israel has extended its laws to the Golan Heights and East Jerusalem, but not the West Bank. Israel signed peace agreements with both Egypt and Jordan, however numerous efforts to resolve the Israeli-Palestinian conflict have not yet resulted in peace. In general terms, Israel does not want to make a peace deal with the Palestinians since they are currently being ruled by Hamas, considered by Israel to be a terrorist organization. The Palestinians refuse to acknowledge Israel’s existence as a separate state. Both one and two state solutions have been discussed, however it doesn’t appear there is any common ground in sight. Israel’s occupation of the West Bank, East Jerusalem and the Gaza Strip, is the world’s longest military occupation in modern times.

Both Jews and Arabs have a history in the region that dates back to ancient times. There is archaeological evidence of settlements dating back 11,000 years. It is believed the first people migrated from Mesopotamia. Much of the history of ancient Israel is laid out in the Bible. Jerusalem, which straddles the border between Israel and the West Bank, has been continuously settled for more than 3000 years. It is home to many sites of historical significance for Jews, Christians and Muslims. They include the Dome of the Rock, the Wailing Wall, the Church of the Holy Sepulchre and the Tomb of the Virgin Mary, to name a few. The Old City is sectioned into quarters; Jewish, Christian, Muslim and Armenian.

There are many popular destinations in Israel. The Dead Sea (which is actually a lake), is the lowest place on earth and the second saltiest. It is called the Dead Sea because its salinity prevents the existence of any life form in the lake. However, the salt and mud are known for their medicinal benefits. The Baha’i Gardens in Haifa, said to be one of the most beautiful gardens in the world, are a memorial to the founders of the Baha’i faith, which attracts pilgrims from all over the world. Tel Aviv is known for its beautiful beaches and a city that never sleeps; a city with true international flair and where you can haggle in the well-known Carmel Market. The Red Sea is known for its coral reef, crystal clear water and as a fantastic place to snorkel or scuba dive. Yad Vashem, is a more somber spot, but an important place to get a deeper understanding of Israel. This is Israel’s memorial to the six million Jewish victims of the Holocaust.

Israel is the only Jewish state in the world. Jews comprise about 80% of the population. However, what constitutes a “Jew” is not so simple. Basically there are six groups, Secular, Ultra Orthodox, National Religious, Traditional, Reform and Conservative. Many Jews can be identified by their dress. All are considered “Jewish” under Israeli law. Interestingly, about 43% of Israeli Jews consider themselves “non-religious”, 35% are “traditionalist”, 12 % “religious”, five percent “Orthodox” and five percent “anti-religious”. The Arab population is mostly Sunni Muslim. The official language of Israel is Hebrew and Arabic with English as the most spoken second language.

Israel has a robust economy with excellent education and healthcare. They are known for advances in technology, pharmaceuticals and agriculture. They invented drip irrigation, grain cocoons (a tent like covering that eliminates mold and keeps pests out), made big advances in biological pest control, and even cultivated a better potato that thrives in hot dry climates and can be irrigated with salt water. They are also world leaders in solar and water technologies. There is much more, but too much to mention here. Israel also has a world renowned philharmonic and ballet.

As we look into the cuisine of Israel, it is an ethnic melting pot of cultures, religions and immigrants. More than half the people are Jews who were born in Israel and the remainder immigrants. But most of their parents and grandparents of those born in Israel, came to Israel from more than 120 different countries, bringing with them their various cuisines. The food scene has grown by leaps and bounds in the past 30 years. It is sophisticated, fascinating and dynamic. Many top chefs who have come to Israel, have trained in the best cities for culinary expertise in the world. There is however typical fare, that is ubiquitous, like falafel, humus, tahini (a thick Middle Eastern paste made from ground sesame seeds) and couscous. In general, the diet is considered Mediterranean and Middle Eastern. Jews are known to eat “Kosher.” In general, “Kashrut” (the noun), is used to describe food that is “fit” or “clean” and prepared and served according to Judaism’s dietary laws. Basically, kashrut prohibits the eating of pork (like the Muslims) and shellfish, or the mixing of meat ingredients with dairy. There’s a lot more to it, but these are the basic principles. Restaurants that are kosher, display a kashrut certificate. Israel grows, olives, all types of citrus, vegetables and enjoys fish from the Mediterranean Sea. The diet is considered quite healthy. They also have a robust wine industry.

So let’s enjoy and Israeli meal: 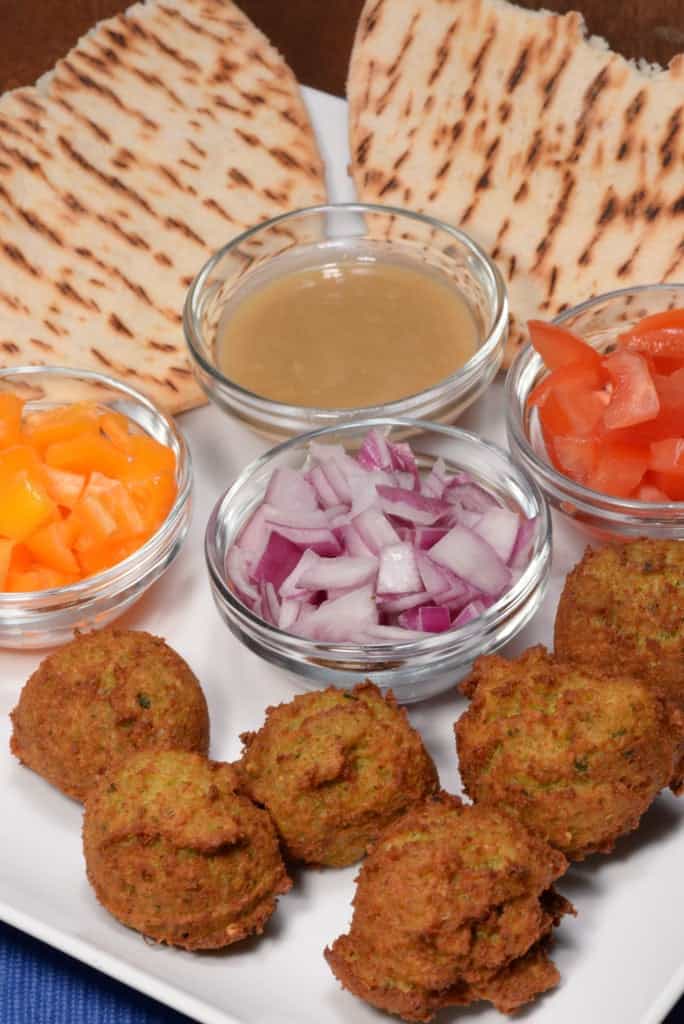 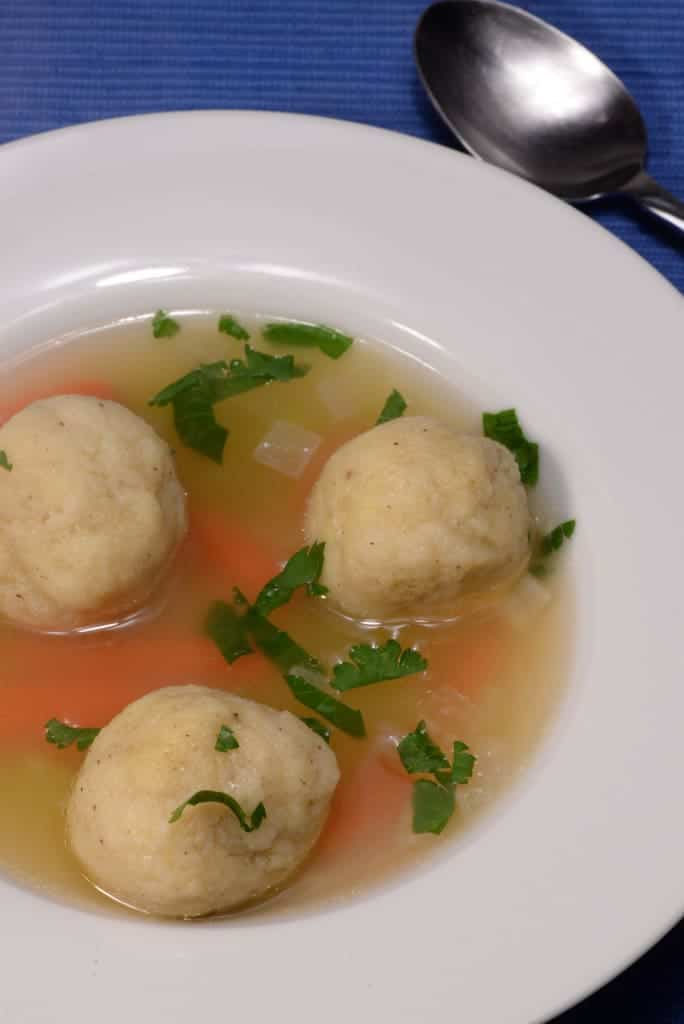 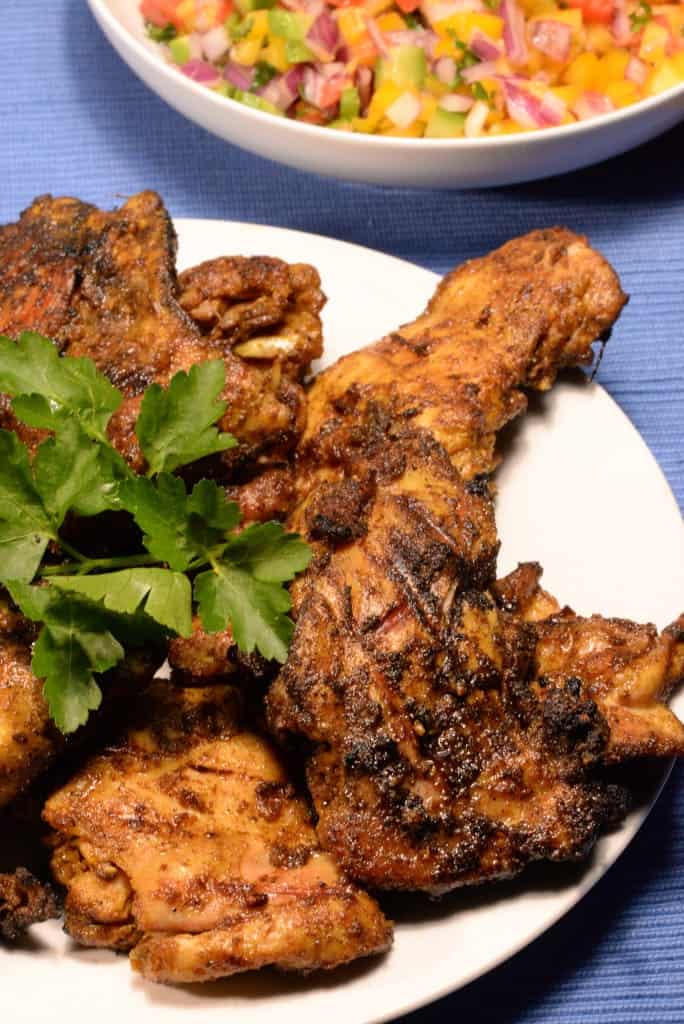 Served with
Israeli Salad (Chopped Vegetables with Lemon and Oil) 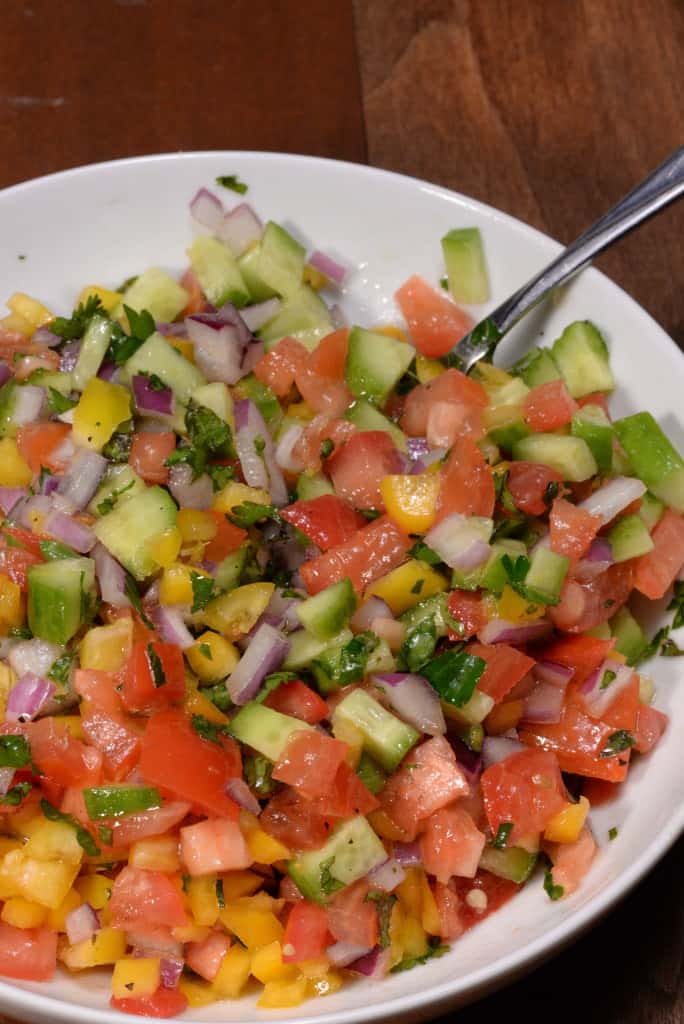 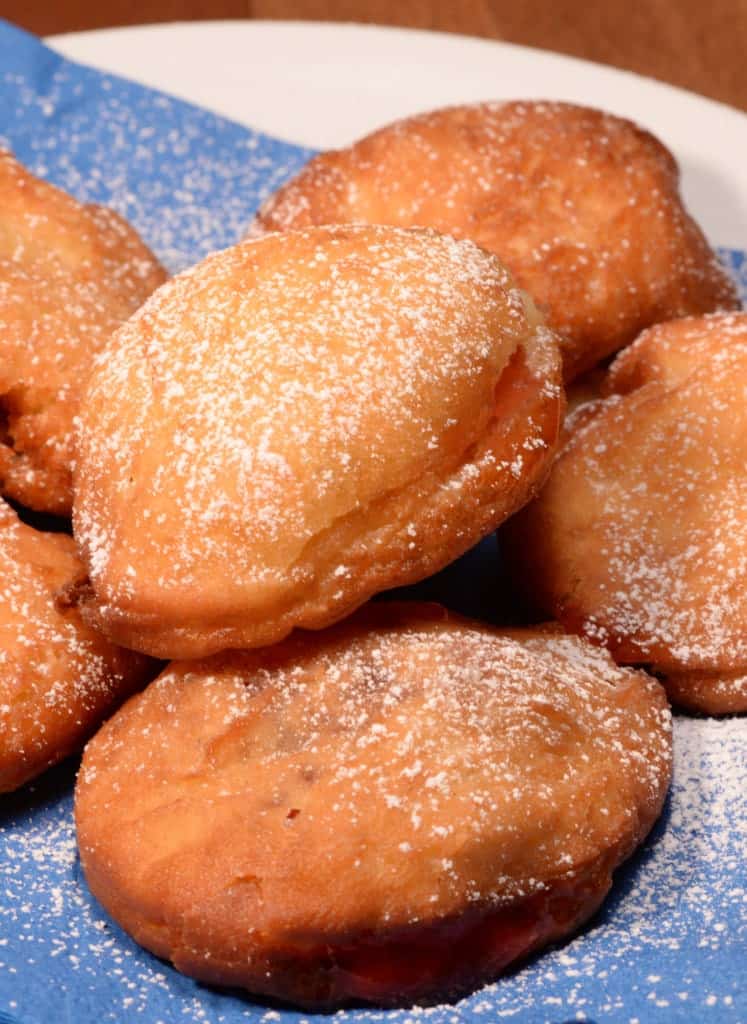 We decorated in the colors of the Israeli flag; blue and white. We used the Star of David and the coat of arms that features a menorah. It has been said that the menorah is a symbol of Israel and its mission is to be “a light unto the nations.” We further adorned our table with cyclamen, the national flower and olives, representing peace, which is their national tree.

We began with a toast, “L’Chayim” (li-KHAY-eem), which literally means “to life” and is a common toast. Our first course was Israel’s national dish, the falafel. In Israel, these are made with chickpeas as opposed to fava beans, like they are in Egypt. They are light and delicious little, fried morsels that we enjoyed in a pita with peppers, onion and tomato and then drizzled with tahini. (Note: this is often times a meal by itself.)

Our next course was a soup course; the famous, matzo ball soup. The matzo balls, made with schmaltz, (chicken fat) were so wonderfully light. They are somewhat similar to a dumpling, served in a rich and clear broth with a few vegetables. This soup was delicious. This dish is almost always served during Passover, a time when Jews commemorate when the Israelites were freed from slavery in Egypt, as described in the Hebrew Bible. The dish however, is loved throughout the year as well.

For the main course we had shawarma, or I should say, the best replication of it we could find. Shawarma is meat that is cooked vertically on a spit, for a very long period of time and is popular all over the Middle East. It has fat interspersed with the meat, to give it exceptional flavor. This dark meat chicken was marinated in an array of seasonings: cumin, coriander, garlic and turmeric and then grilled. The result was an amazingly tender and succulent chicken that was awesome. It was served with a typical Israeli salad; fresh chopped, tomatoes, cucumbers, onion, peppers and herbs and lightly dressed with a touch of lemon and olive oil. It was perfect with the shawarma.

For dessert, we devoured the sufganiyot. They are little, jelly-filled doughnuts lightly dusted with powdered sugar. These doughnuts are often made during Hanukkah and are truly addicting. Hanukkah is a Jewish holiday commemorating the re-dedication of the Holy Temple in Jerusalem, at the time of the Maccabean Revolt. Hanukkah is observed for eight nights and days, starting on the 25th day of Kislev, which may occur at any time from late November to late December, in the Gregorian calendar.

As we say goodbye to Israel, Shalom (peace), says it all.
Until next time,
Darlene Longacre