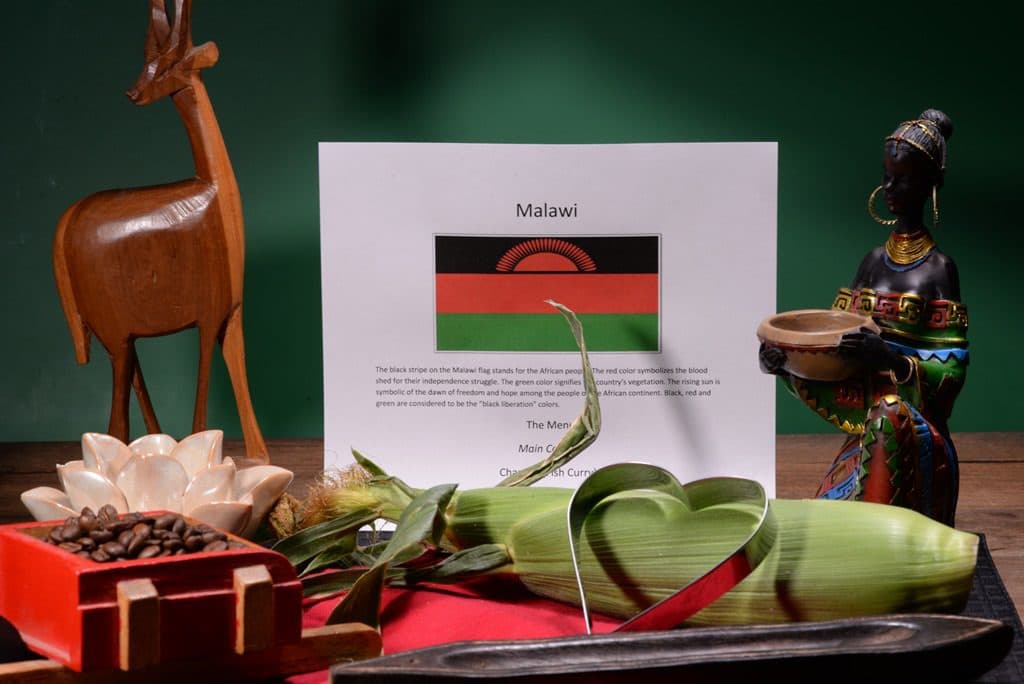 The name Malawi is derived from the word Maravi, which means, “Flames.”  The Maravi Empire was a dynasty founded by the Amaravi people in the 15th century.  The Amaravi people were ironworkers, so the name may have come from the kilns, used for their work that would light up the night sky.  Another theory, is that the name comes from the fiery sunrises and sunsets, seen all around Lake Nyasa.  The Amaravi people eventually became known as Chewa, after migrating to the area from the Republic of Congo, in search of a better life, free from unrest and disease.  The Chewa are the largest of several ethnic groups that call Malawi home.

Malawi’s first contact with Europeans was with the Portuguese.  They traded ivory, iron and slaves.  It was the Portuguese who introduced maize to the region and it remains a staple crop today.  Malawi was for a time known as Nyasaland and was colonized by Britain in 1907.   Malawi gained independence on July 6, 1964.  Nyasa actually means “lake” and it was sort of a misunderstanding when David Livingstone, a Scottish missionary, asked what the name of the lake was back in 1859.  He was told Nyasa, which he thought was the actual name of the very large, freshwater lake that runs along nearly the entire border of eastern Malawi.  It actually was how they say the word “lake” in Chichewa, the native language.  So it was called Nyasa-lake or “Lake-lake.”  David Livingstone was an important crusader against slavery and brought Christianity to the region.  He believed the only hope for the Africans was Christianity, commerce and colonization.  Christianity is the major religion in Malawi, followed by Catholicism and Islam.  English is the official language of Malawi, along with Chichewa.

Malawi is one of the smallest countries in Africa, yet one of the most densely populated.  Malawi is landlocked and located in southeastern Africa. Her neighbors are Zambia, Tanzania and Mozambique.  Lake Malawi (also known as Nyasa-lake) runs nearly down the entire eastern border.  The lake is very significant to Malawi and its people.  It is like its own inland waterway.  The lake is the ninth largest in the world.  It is 365 miles long and 52 miles wide.  It is beautiful, with beaches of golden sand and crystal clear waters.  It is famous for all sorts of watersports and is the crown jewel for tourism in Malawi.  Fishing villages are scattered about the shoreline, where traditional fishing practices are a draw for visitors.  The lake is part of the Great Rift Valley and was made from natural tectonic faults, making the backdrop of mountains and some other places, inaccessible by land.  Lake Malawi national park, which is located at the southern end of the lake, is an UNESCO World Heritage site and holds an aquarium-like array of tropical fish that are only found there.  The lake is home to more species of fish than any other lake, most of them endemic.  The wild population of fish however, is being threatened by over fishing and water pollution.  Malawi hosts a music festival, held on the lake’s shores, called the Lake of Stars Music Festival.  It is said to be one of the top 20 festivals in the world and one of Africa’s most respected music festivals, aimed to bring awareness to the vulnerability of the lake’s ecosystem.

Malawi is mainly an agricultural country, which supports about eighty percent of the population and accounts for eighty percent of its export earnings.  Tobacco, tea, coffee and sugarcane are the main crops.  Maize is also grown but for their own consumption.  Nearly every family has a patch of land to grow maize to feed their families. The whole family takes part in growing maize.  Times can be tragic after periods of drought or floods, which unfortunately they face more often than naught.  Malawi is poor, really poor, with an annual GDP per capita of only $1100 annually.  They also have one of the highest rates of HIV and AIDS.  More than a million children are orphans because of this crisis.  The average life expectancy is only 53 years of age.  The infant mortality rate is so high that some families don’t even name their children until they make it to the age of two.  Of the nation’s 15 million people, nearly half is under the age of 21.

The country was run by a dictator, by the name of “His Excellency the Life President Ngwazi Dr. H. Kamuzu Banda”, as a one-party-rule, after independence.  Allegiance to him was enforced at every level.  Banda and his government were criticized for multiple human rights violations.  After he was deposed, Banda was put on trial for murder and destruction of evidence.  On June 14, 1993, the Malawian people voted overwhelmingly in favor of a multi-party democracy.   Although democracy has not been easy due to government corruption, they continue to have, what are considered fair elections.  The latest president is Peter Mutharika and he has worked both domestically and globally in the field of international justice.  He recently signed a law increasing the marrying age to 18. in a campaign against Malawi’s disturbing rate of child marriage, which has been one of the highest in the world.

Malawi may be poor in terms of wealth but despite that, they are a very welcoming nation.  They get their nickname the “Warm heart of Africa”, because of the kindness of the people.  Perhaps this is why Roger Federer, (the great tennis champion) and Madonna (world-renowned singer) have started charities to help the people there.  Madonna has even adopted two Malawian children, which was quite controversial at the time.  The law regarding the requirement to have lived in Malawi for 18 months or longer prior to adoption, was ultimately waived.  When you see pictures of the beautiful children of Malawi, it is hard not to fall in love.  There are numerous other charities, religious organizations and others that do their best to help the people of Malawi.  Even still, there remains much work to do.

Malawi has also placed many of its parks in the hands of private companies, which provides a good chance to increase tourism.  They have done a couple of large relocation programs of lions and elephants, to ensure they have good habitat and are safe from poachers.   All the typical animals that you would find on safari in the other, more well-known countries of Africa, are also found in Malawi.  The Thompson Gazelle is their national animal.

As we look into the cuisine of Malawi it is influenced heavily by what food is available to its people.  Maize is the staple.  Fish from the lake is loved by those who can access it.  Otherwise, goat, cattle and chickens are raised as part of the subsistence living, which is the way of life for most Malawians.  The rural farms are their life source.  Cassava, sweet potatoes, along with other vegetables are grown and consumed as the weather allows.  Tea is also loved and widely served in Malawi

So let’s enjoy a Malawian meal: 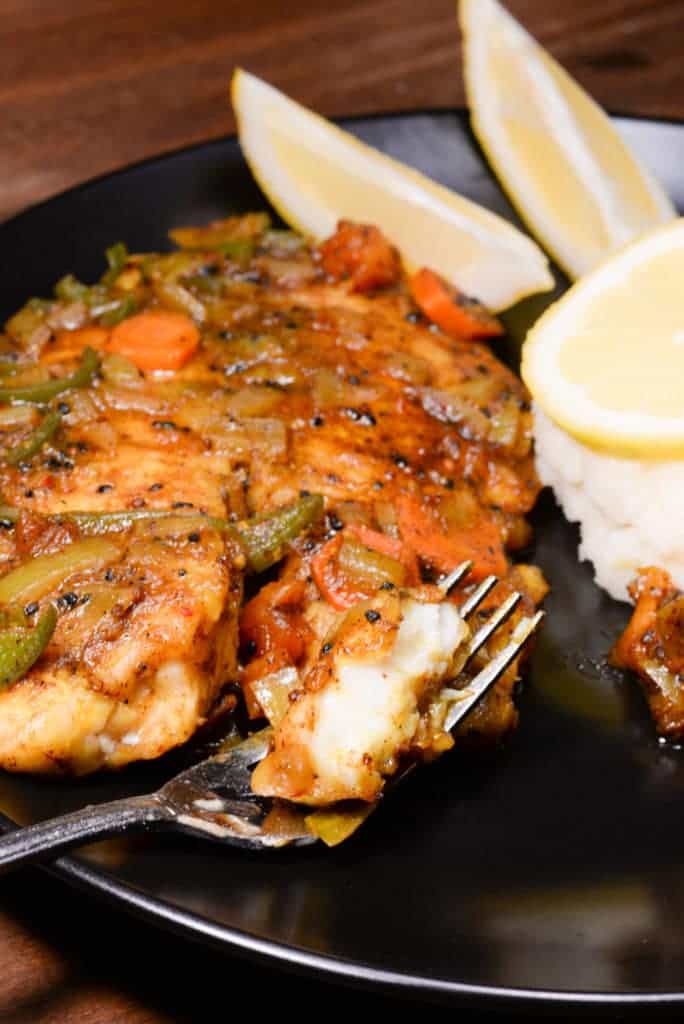 Made with Malawian Curry Spice Blend 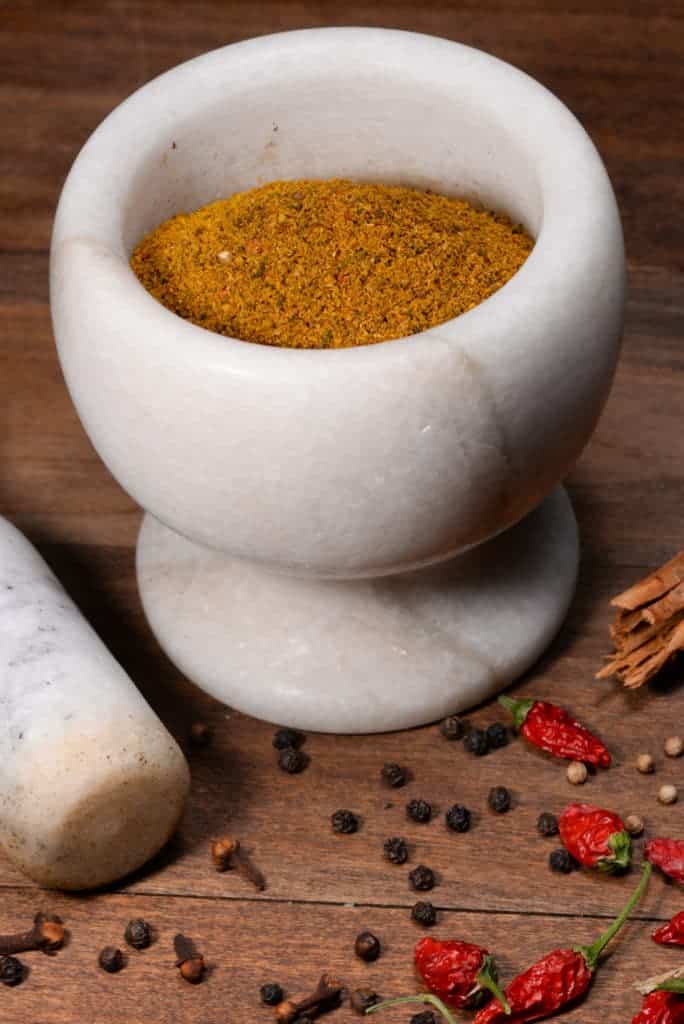 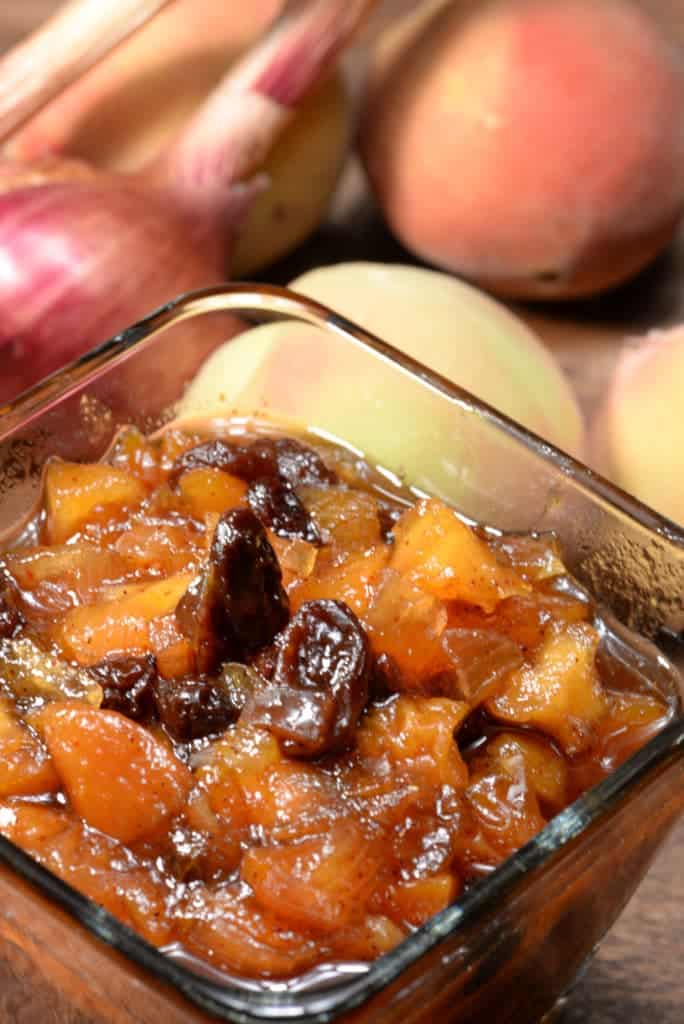 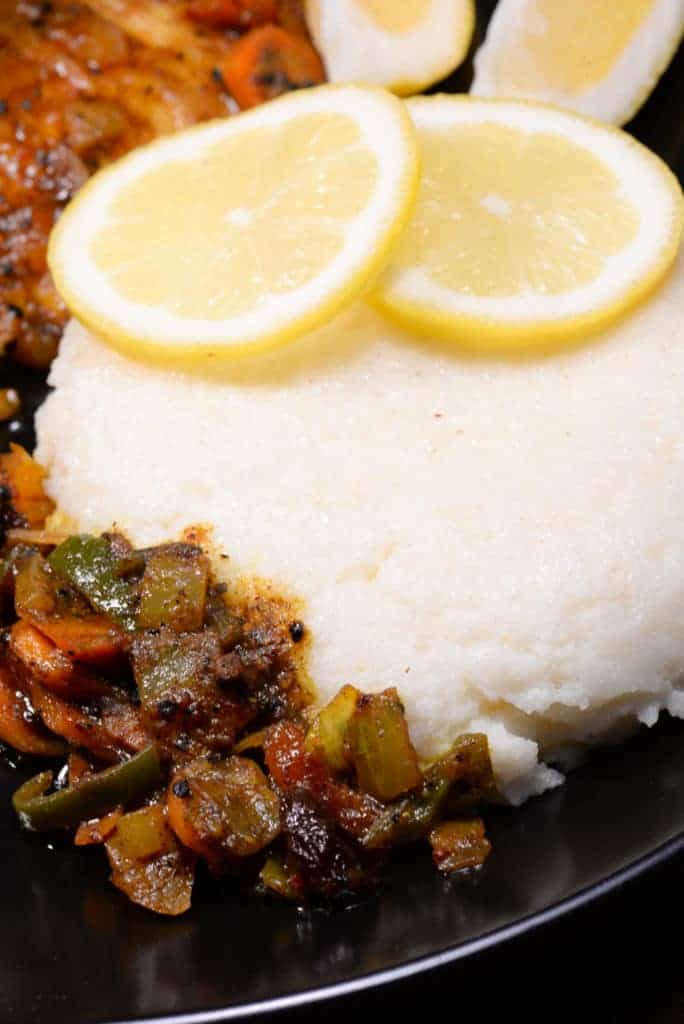 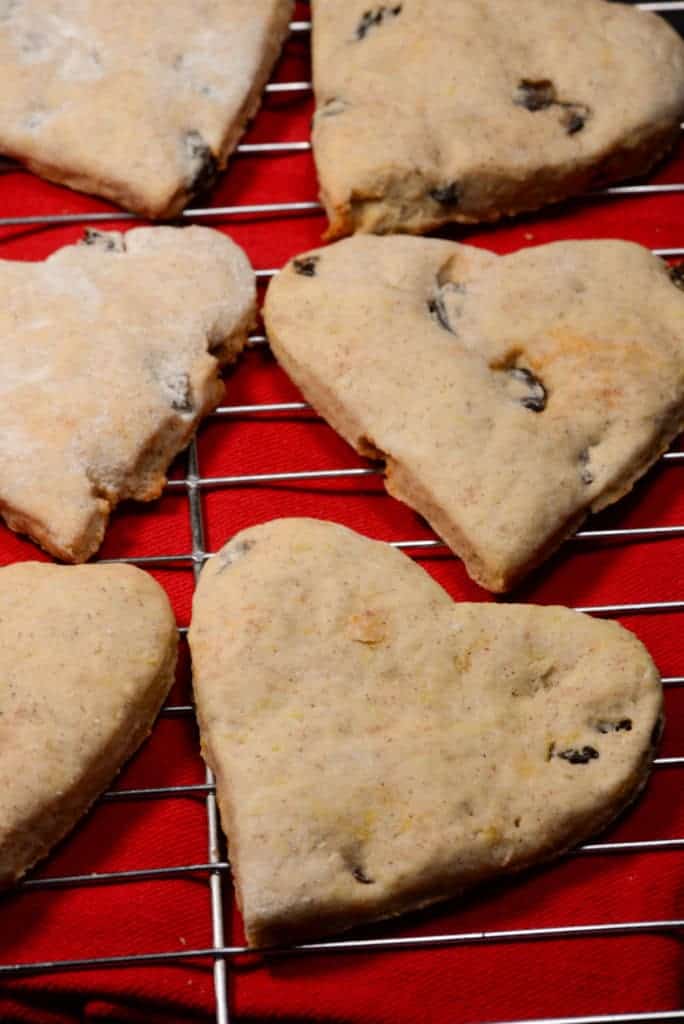 We decorated with the colors of the Malawi flag; black, red and green.  Corn was chosen as a centerpiece, as it is critical to life in Malawi.  In fact, they have a saying, “Ndi moyo” which  means “maize is life.”  They do sometimes consume fresh corn, however it is mostly used once ground up into a flour, to make their national dish called Nsima, which is a cornmeal porridge.  This dish is often times the only meal of the day for many Malawians.  It provides much needed energy in the form of carbohyrdates.  We added a wheelbarrow of coffee beans, a lotus, which is the national flower, a boat to represent Lake Malawi, and a heart shape to complete the setting.

Our meal was basically one dish, which would be typical in Malawi.  Chambo is a tilapia type fish that is a delicacy and  comes from the freshwater lake.  What makes this dish amazing is the way it is prepared.  First, a special, spice curry blend was prepared along with a fruit chutney, or relish.   Many different types of relishes and sauces are made to serve alongside nsima, their cornmeal porridge.  This combination of spice and sweetness made up the gravy to flavor the fried tilapia.  The result was amazing.  We definitely will include this dish in our favorites list.   We also very much enjoyed the nsima, made from cornmeal.  Nsima is used much like fu-fu is used, in many other African countries.

For dessert we prepared a special cookie, called mbatata, made from sweet potatoes.  They were moist, yummy, and a perfect ending to our Malawian meal.  Of course, we made them into the shape of a heart to celebrate the Malawi spirit and then enjoyed them playing mancala.  Mancala is an ancient game that has been played for thousands of years.  Bao is the most popular form played in Malawi  and children in rural areas often play using dips in the ground to hold the stones or seeds.

As we say goodbye to Malawi, I leave you with a few of their proverbs:

“Don’t think there are no crocodiles just because the water is calm.”

“Gold is a debt we can repay, but kindness not till our dying day.“