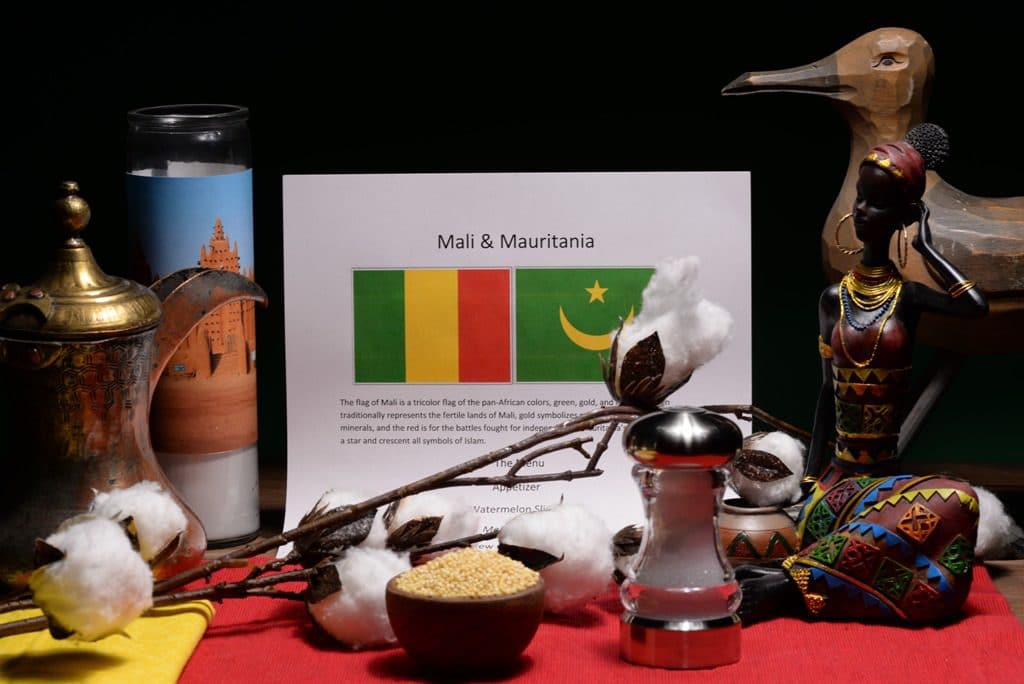 Mali and Mauritania are neighbors in the northern section of West Africa.  They have several things in common, including a border.  They both are large countries; Mali is the eighth largest country in Africa, with a large portion of the country lying deep in the Sahara Desert.  Most of the inhabitants of Mali live in the south, along the Niger and Senegal Rivers.  Mauritania is the 11th largest country in Africa.  It is not landlocked like its neighbor Mali, as its western border is the Atlantic Ocean.  Ninety percent of the land of Mauritania is also within the Sahara Desert.  Mauritania’s population is most concentrated in the southern part of the nation, as well.

Both countries are predominately Muslim.  Mauritania is officially called, “The Islamic Republic of Mauritania.”  The country is nearly 100 percent Muslim with only about 4500 Roman Catholics, served by the Roman Catholic Diocese of Nouakchott, which was established in 1965.  They have extreme restrictions on freedom of religion and it is one of only 13 countries in the world which punishes atheism by a sentence of death.  Mali, in contrast, provides for freedom of religion and does not permit any form of religious discrimination.  It is about ninety percent Muslim.  Both countries suffer from extremism and are considered to be a couple of the poorest nations on earth, despite being rich in natural resources.  They have each suffered from coups since their independence from France in 1960; Mali on September 22nd and Mauritania on November 28.

Mali and Mauritania both have a large population of Haratines, (freed, African slave descendants.)  Some human rights groups fear that slavery still exists in these countries, mainly impacting women and children.  In Mauritania slavery wasn’t outlawed until 1981 and even then, it is believed the law was never enforced.  In Mali, there were reports, as recent as 2012, that during a rebellion, ex-slaves were recaptured by their masters.

The majority of the population in these two countries depends on agriculture and livestock, even though most of the nomadic, tribal, lifestyle was forced into the cities.  This was mainly due to the massive droughts that occurred in the 1970s and 1980s.  Cotton, is grown in Mali and is an important export.  Iron ore and fish are important for Mauritania.

Mali gets its name from the Mali Empire that was formed on the upper Niger River and reached its height of power back in the 14th century.  The name has dual meanings in the Bambara language; “hippopotamus” and “where the king resides.”  The Capital city of Bamako, means “Crocodile River.”  The official language of Mali is French but it is a multilingual country with at least 50 tribal languages spoken.  Arabic and English are two other important languages.  Mali was also the cradle of the Empire of Ghana; West Africa’s first, Black Empire.  Mali has not promoted itself for tourism and therefore the people remain quite traditional, practicing many of their old cultural, tribal ways, such as Ancient, African drumming.

Timbuktu, a city in Mali, was an important center for Islamic learning and trade during medieval times.  It is still used as an important stop for salt caravans and traders.  Back in the day, salt was such a sought after commodity that people would trade it, pound for pound, for gold.   Some buildings remain from its hay day.  Rock paintings found in the area of Gao and Timbuktu suggest the region was inhabited as early as 50,000 BC.  Gao, is another city in Mali, which lies right on the meridian marker.  In Gao, one can literally stand on the edge of two hemispheres.

Mali may be best known for the Grand Mosque, in the city of Djenne’.  It is the largest, mud brick, building in the world and looks like a giant, sand castle.  It was built in 1204 AD.  The massive Mosque is a national treasure.  The bogolanfini cloth, which is a handcrafted, cloth, dyed with mud, is only produced in this part of Africa.  The Dogon people, of central Mali, hold a masked festival, featuring 75 different masks, known as the Sigul.  This festival only happens every sixty years and lasts for several years, as it travels from village to village.  It symbolizes the period between the death of the first ancestor and the moment humans began to speak. The next festival will begin in 2027.

Mauritania, pronounced “more-atania,” also gets its name from an ancient kingdom; the Berber Kingdom of Mauretania.  This kingdom existed from the third century to the seventh century BC, to the far north of modern-day Morocco.  The Romans referred to the Berber people as “Maures.”   The Latin meaning of the word “Mauretania” is “West.” Today about one-third of the population lives in the capital city of Nouakchott, which is located on the Atlantic coast.  Nouakchott means, “place of the winds” and was only designated as a capital in 1960, making it one of the newest capitals of the world.  The official language is Arabic, with formal recognition of French, Fulani, Soninke and Wolof.  There, unfortunately, is constant ethnic conflict, especially between the Nomadic Arabs and the Black Africans.

Mauritania is home to what is known as the “Eye of Africa.”  If you were to look at it from space, it looks like a perfect, bull’s-eye image.  It is believed to be some sort of a highly symmetrical and deeply eroded geologic dome that collapsed.  It is massive, with a diameter of 30 miles.  Some are amazed by the resemblance of this structure and Plato’s description of the city of Atlantis.  Either way, much more research is required, (when it is safe to do so,) to get a better understanding of this unique place.  There are other special places in Mauritania, some of which are UNESCO world heritage sites. The old town of Chinguetti is one of them, which draws people from all over and allows them to be transported back in time, into an old Arab town.  The prominent landmark in Chinguetti is the Great Mosque, built during the 13th or 14th century and said to be the soul of the city.

Parc National du Banc d’Arguin is also an UNESCO site and is located between the two largest cities.  The area is composed mainly of sand dunes, which provide a rich biodiversity, as they stretch to the Atlantic Ocean.  The park serves as a breeding ground for birds and has one of the largest concentrations of migratory birds in the world, which includes: pelicans, terns, flamingos and broad-billed sand pipers.  It is a bird lover’s paradise.  The surrounding waters are an abundant food source, for not only the birds, but also for the people living in the area.

As we look into the cuisine of both nations, they are very similar to other West African countries and North Africa countries, as well.  Mauritanian’s national dish comes from neighboring Senegal.  It is a dish called Thieboudienne (cheb-u-jin,) which is popular on the coast and made with fish and rice, tomatoes and other vegetables.  Fish is a staple in Mauritanian cuisine.  Mali doesn’t list a national dish but they also eat fish from the rivers.  Often times, it is served with kuskus or couscous, which is prepared using millet or barley flour, rolled to create small pellets that almost look like rice.  Women in both countries gather to make large batches that will last for weeks.  It is the base for all sorts of sauces, many are made with peanuts and sweet potato leaves.  Vegetables, like sweet potatoes, tomatoes, onions, okra and peppers, are often used.  Meats eaten there are typically lamb, goat, chicken and fish.  Alcohol is not consumed by Muslims, nor is pork.  Interestingly, obesity is an issue for women in Mauritania, which is not very common in most other African countries.  Being large is considered beautiful by Mauritanian men.  Many dishes from surrounding countries would also be most appropriate to represent Mali and Mauritania as well.  Feel free to click on the links for the recipes for Akkara, a bean fritter, Yassa poulet, a lemony chicken dish, as well as jollof rice, a spicy rice dish.

So let’s enjoy a Malian and Mauritanian meal: 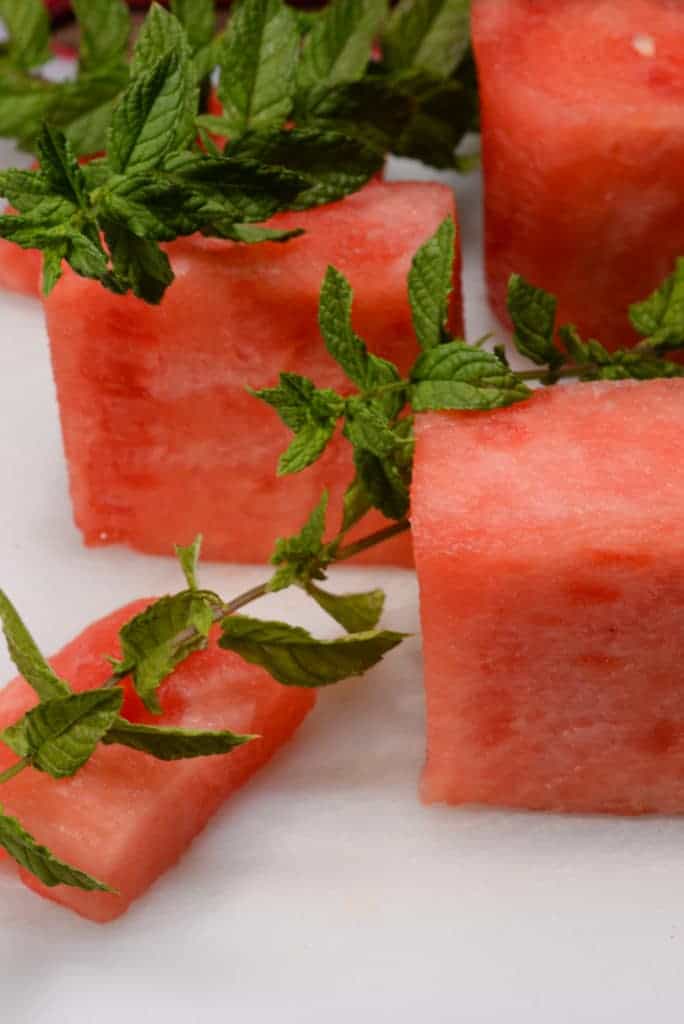 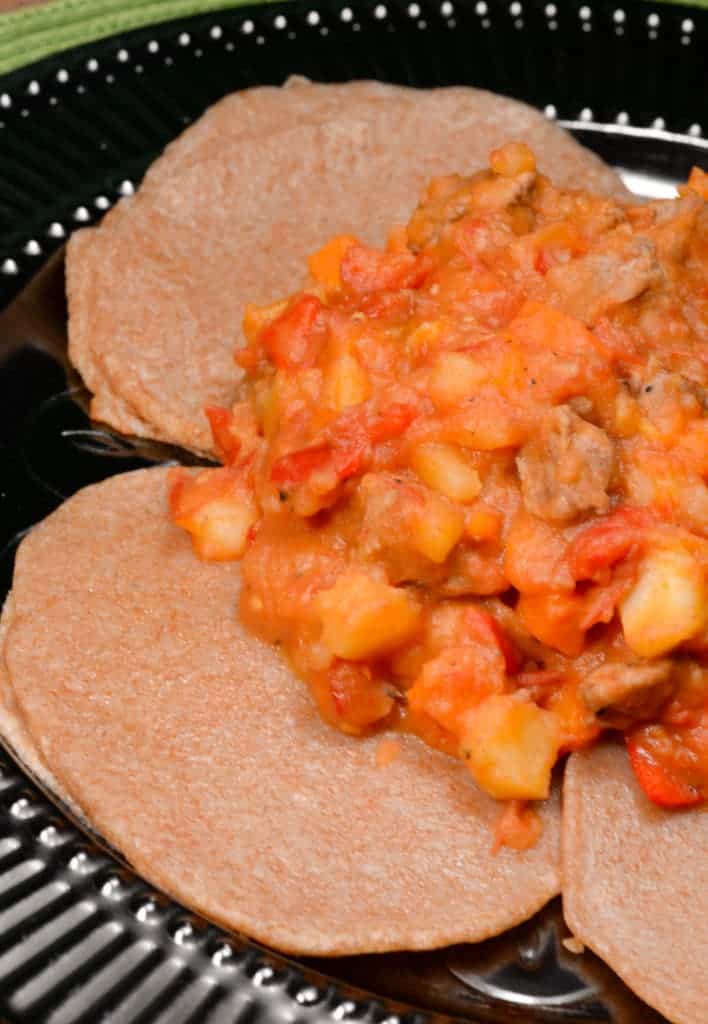 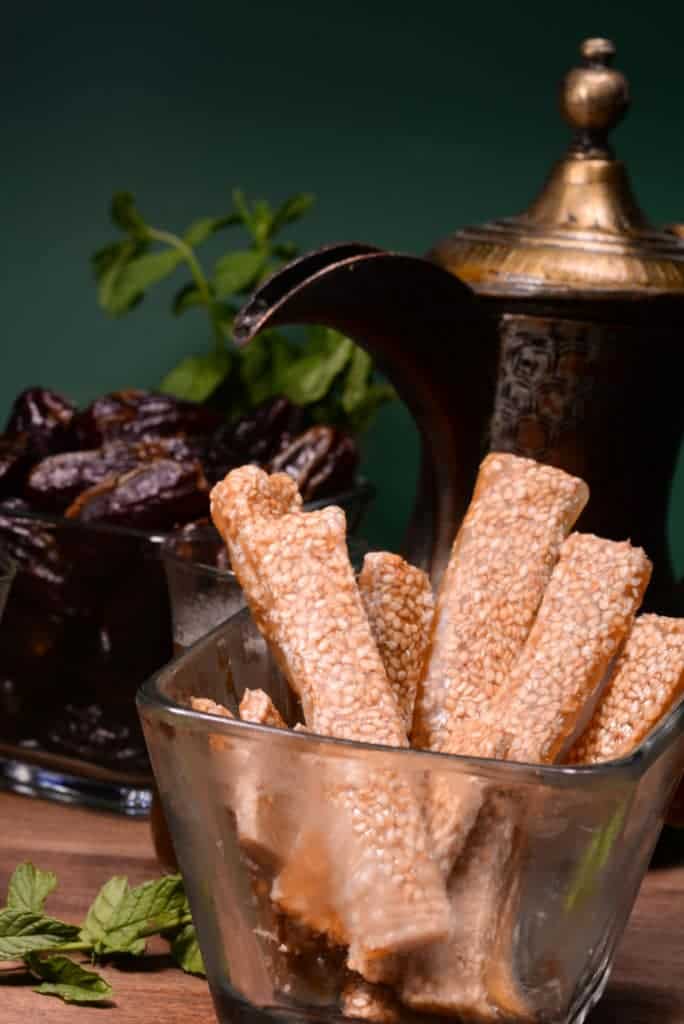 The Tea Ritual (Green Tea served with Mint and Sugar) 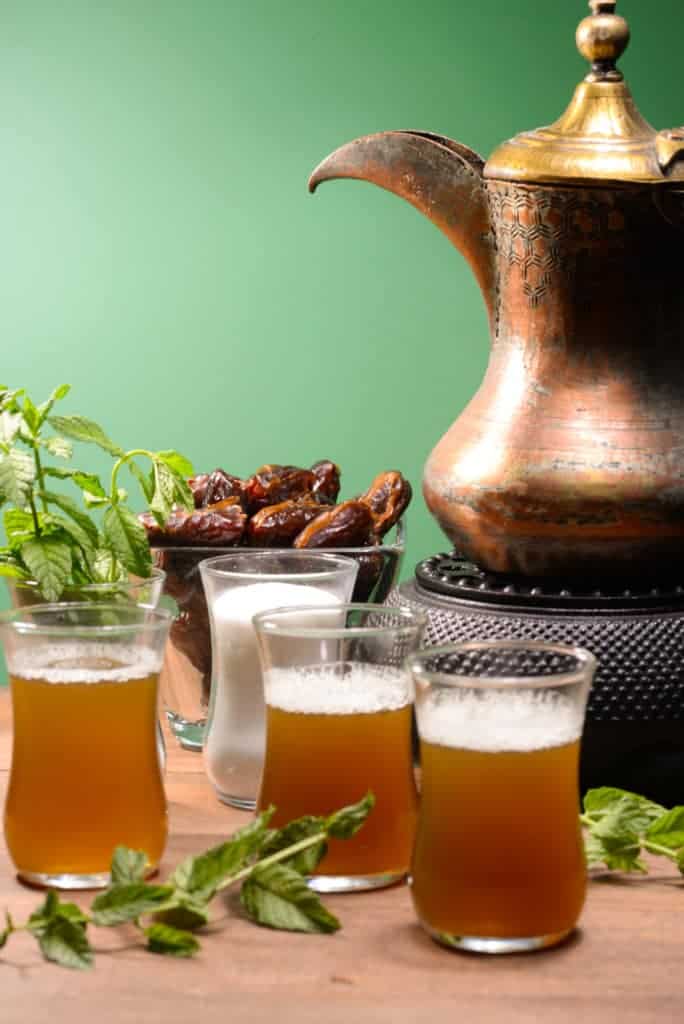 For this meal we began with a handwashing custom, by passing around a pot of water and a basin.  We decorated with the color of their flags; green, yellow and red.  We sat on the floor, to enjoy the meal communal style.

Our first course was simply, watermelon slices.  In both countries, watermelon is a beloved fruit.  It is not hard to imagine why this fruit is so important, given the dry, hot and dusty conditions of the Saharan Desert.  You will often see women and children selling watermelon at the local markets and they even have the ability to carry it on their head.  We enjoyed the watermelon with a touch of mint, on a hot summer day and loved it.  In both countries, a wild variety of watermelon grows that has white flesh.  The seeds are ground and used in baking, adding a different nutritional value than that of grain.  Watermelon is also commonly served as dessert,

For the main course, we faced the challenge of rolling up the savory lamb stew in a pancake, using only our right hand, which is customary there.  It does take some practice when you are not used to it, and definitely adds to the entertainment of the meal.  This dish is a simple, lamb stew, seasoned with a bay leaf, salt and pepper. This allows the flavors of the lamb and vegetables to shine through.  The pancake, made with millet flour, was tasty and had a bit of a nutty flavor.

For dessert we we had sesame seed and honey sticks, called meni-meniyoung.  Sweet and yummy they were served alongside fresh dates and were part of the tea ritual.  Tea pulling, as it is called, is really an art form.  From about a meter away, the host perfectly pours the tea, first from the pot to a small glass and then from glass to glass, until a foamy, frothy top appears.  This aerates the tea, taking away the bitterness.  After the first glass, the pot is returned to the coals and brewed again, this time with mint and copious amounts of sugar.  (It brings a whole new meaning to sweet tea.)  The tea party is the ultimate form of hospitality and friendship and is also used for business negotiations in both countries.  Often times, the tea party can last for several hours. however it always includes precisely three cups of tea. The first cup is bitter, like life, the second one, strong, like love and the third cup, gentle, like death. The tea is slurped loudly and every drop is savored.

As we say goodbye to these two African countries, we do so with a prayer for the people living along the Niger River who, in the next couple months, may be facing epic flooding.