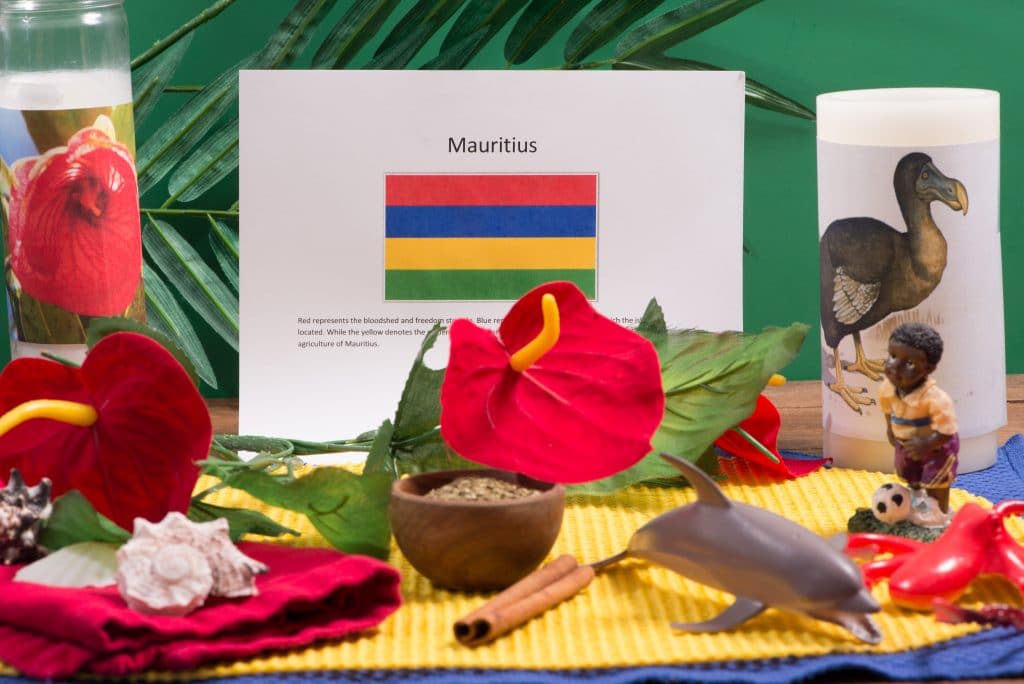 Mauritius is a beautiful island nation in the Indian Ocean and considered part of Africa.  Its neighbors are: Madagascar, to the west, Reunion Island, to the southwest and the Seychelles, to the north.  Mauritius also controls three other small islands.  When the islands were discovered, sometime in the ninth century by Arab sailors, they were uninhabited. The Arabs were not interested in settling on the island but did give the island its first name, Dina Arobi.  In 1505 a Portuguese sailor discovered the island and called it Cerne, although the Portuguese did not settle on the island either.

It was 1598 when the Dutch colonized the island.  They landed on a bay which was named Warwyck Haven, after their commander and today it is known as Grand Port.  The islands’ name Mauritius, came during this period and it was named after the Prince of Holland Mauritz de Nassau. Today it is called Moris, in Mauritian Creole and L‘ile Maurice, in French.

The Dutch abandoned the island in 1710 after doing irreversible damage to the indigenous flora and fauna.  When the island was first discovered it was covered in dense forest.  They exploited the black ebony trees for their timber and left behind fugitive slaves, java deer, and sugarcane.  The famous dodo bird, indigenous to this island, also became extinct during this period, due to over hunting.  The dodo bird remains an important symbol to Mauritius.  It is proudly displayed on their coat of arms, and is their national animal.  The dodo bird got worldwide attention from Carroll’s, Alice’s Adventures in Wonderland, where it was a character in the book. The bird became flightless due to a lack of predators on the island which made it an easy mark for hunters, as it lost its habitat.  An image of the bird in a famous painting, called Edward’s Dodo, is housed in the Natural History Museum in London and is considered to be the most accurate depiction of the extinct dodo.

After the Dutch left the island, the French settled there in 1713.  They renamed the island, Ile de France.  They settled on the north-western side where they established their main harbor.  Port Louis is now the capital today of Mauritius.  This was a prosperous time for the island.  It was ultimately however, the British who took over the island, after a fierce battle which they initially lost, called the, Battle of Grand Port.  The island was renamed Mauritius under British rule until they gained independence on March 12, 1968 and then later became officially known as the Republic of Mauritius.  Sir Seewoosagur Ramgoolam is considered to be the “Father of the nation”, as he led them to independence and did much to advance their development.

Today the country is a stable democracy with free elections.  It has one of Africa’s highest per capita incomes.  Sugarcane and tea are both important crops for the nation.  Tourism and the growing financial sector contribute greatly to the GDP.  The majority of the population is indo-Mauritians, people of Indian descent, who were brought over by the British to work the sugarcane fields after slavery was abolished, in 1835.  About one quarter of the population is Creole, a mixed race of African descent and a small minority is Sino-Mauritians, of Chinese descent. This makes the country a multi-cultural society with great diversity.  The population is used to living together in peace and harmony.

The government sees to it that everyone can practice their religion without any prejudices.  Many holidays are celebrated in Mauritius based on the ethnic and religious makeup of the population.  For example the Chinese Lunar New Year is celebrated as an official public holiday, as are a couple of important Hindu festivals, such as Cavadee and Maha Shivatree.  Hindu is the religion of about half of the population.  Christian holidays, such as All Saints Day and Christmas Day, are also official holidays.  Christians make up about one third of the population.  A public holiday for Muslims is observed that marks the end of Ramadan, which is a three day celebration, called Eid-Ul-Fitr.  On Fridays, Muslim men are allowed to attend the call to prayer during working hours.  Muslims and Buddhists make up the balance of this beautiful and diverse nation.

Mauritius does not have an official language however, the main language used by the government is English.  English is also what is taught in public schools.  Mauritian Creole is the most commonly spoken language, although there is no official written standard for it.  Mauritian Creole is French based, while incorporating words from English, Dutch and Portuguese.  French is the language that is most commonly used in the mass media and formal settings.  Tamil, Hindi, Urdu, Hakka, Bhojpuri and Mandarin are other languages spoken on the island.

As we look into the cuisine of Mauritius, just say the word “delicious” and you properly pronounce Mauritius; it rhymes perfectly and it is oh so appropriate when it comes to their cuisine.  Think of all the influences that have passed through this nation and remained on this island nation over the generations and you get a sense of the variety and fusion that is singularly Mauritian.  Culinary traditions from India, Asia, France, Britain and Africa makeup the largest influences.  Of course, the creatures from the sea play an important part of the cuisine as well.  Spices, lend another distinctive role: saffron, cinnamon, cardamom, cloves and mustard seed, along with herbs such as: thyme, basil and curry leaves, all help to define the unique Mauritian flavor.  All different kinds of tropical fruits are also abundant.  A couple of Indian delicacies, like samosas and dholl puri, have become famous on the island.  Glorious Asian soups and dumplings are also loved.  Roti and rice are enjoyed with endless curries as well as flavorful dals, (a variety of lentil soup.)  Often times, achards (spicy, pickled vegetables) accompany the dishes.  There is one sauce however that is ubiquitous and can be had with just about any type of meat or seafood.  It is called raougaille (pronounced rooh-guy).  It is a delicious, spicy tomato and onion sauce that is a variation of the French ragout that hits all the perfect notes in Mauritian cuisine.  It is enjoyed daily by most locals there.

So let’s enjoy a Mauritian meal: 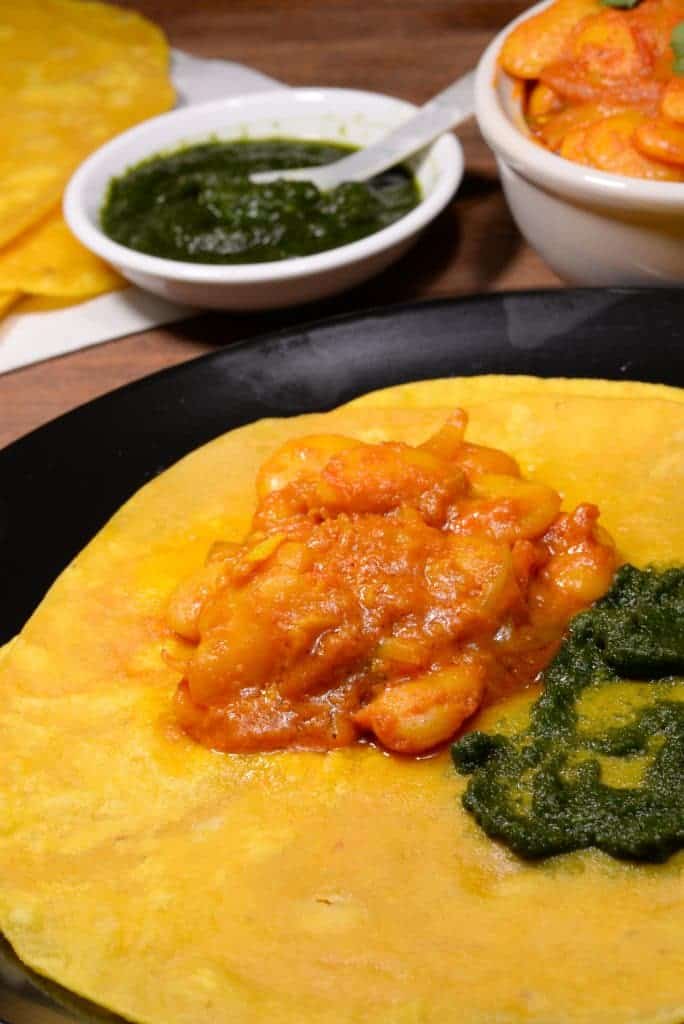 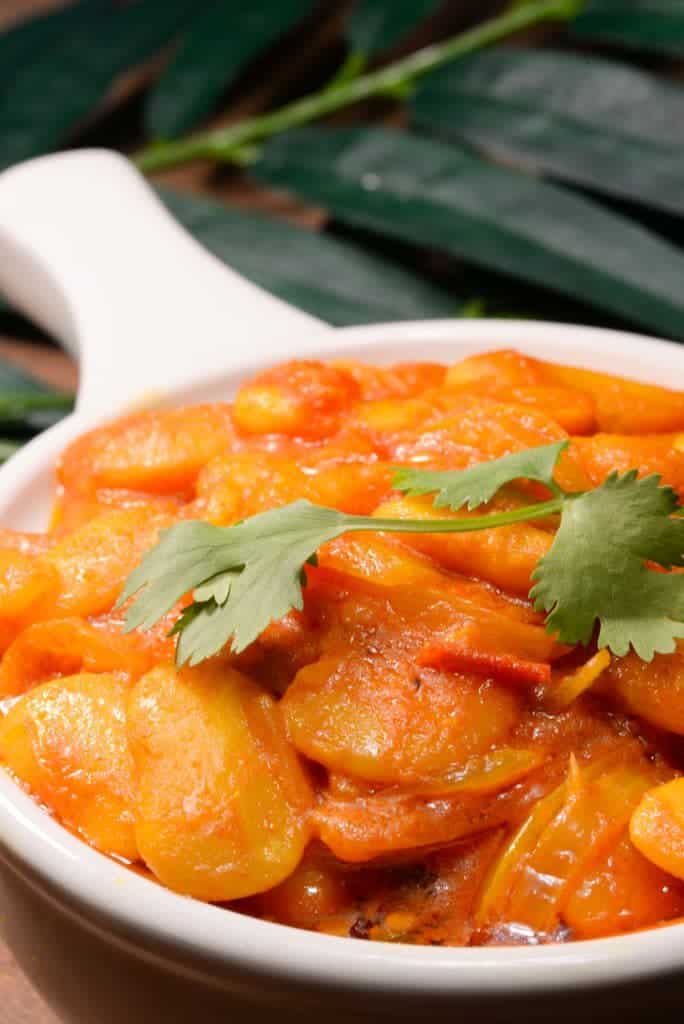 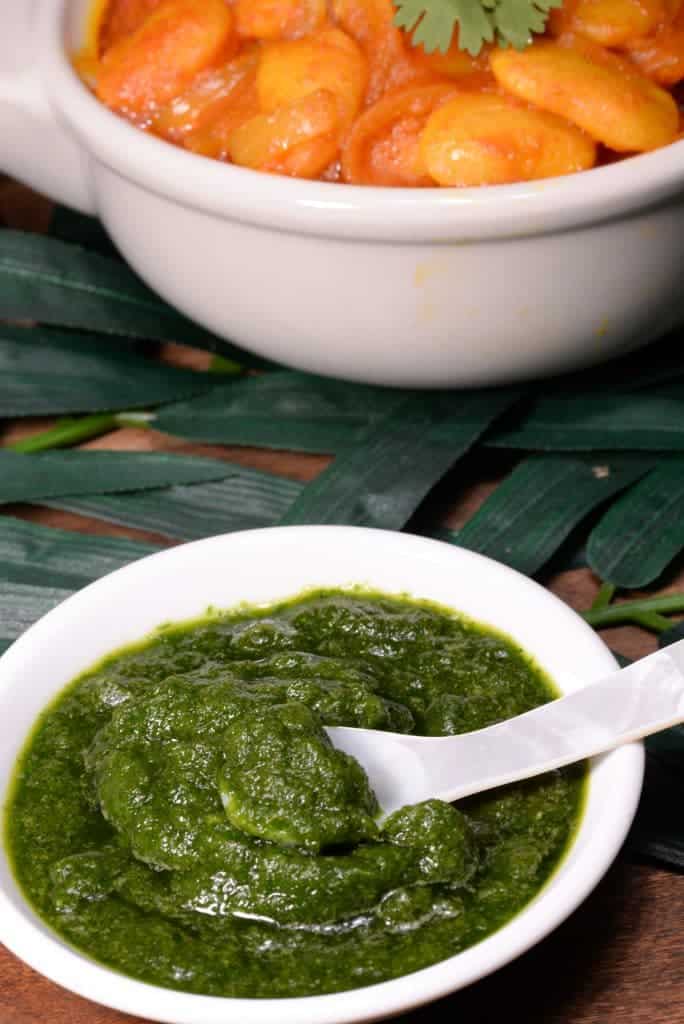 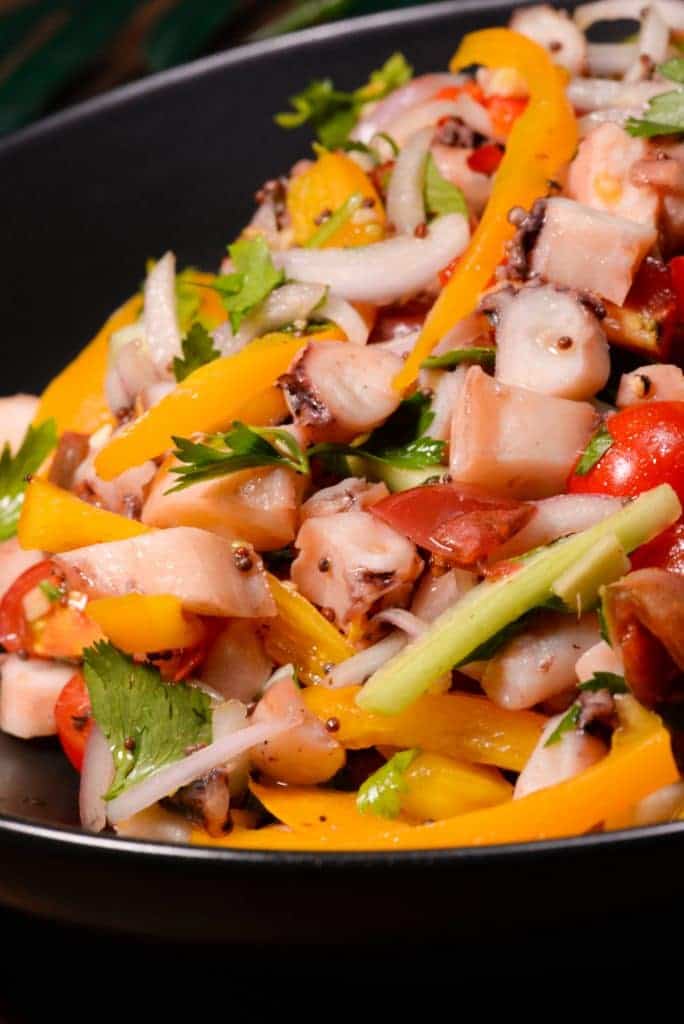 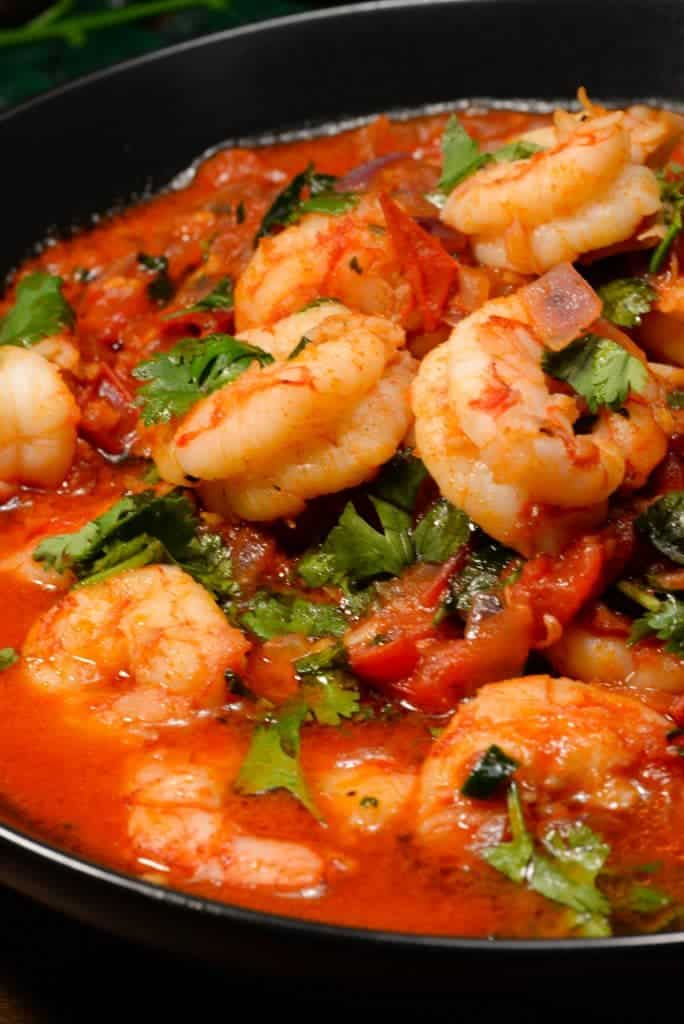 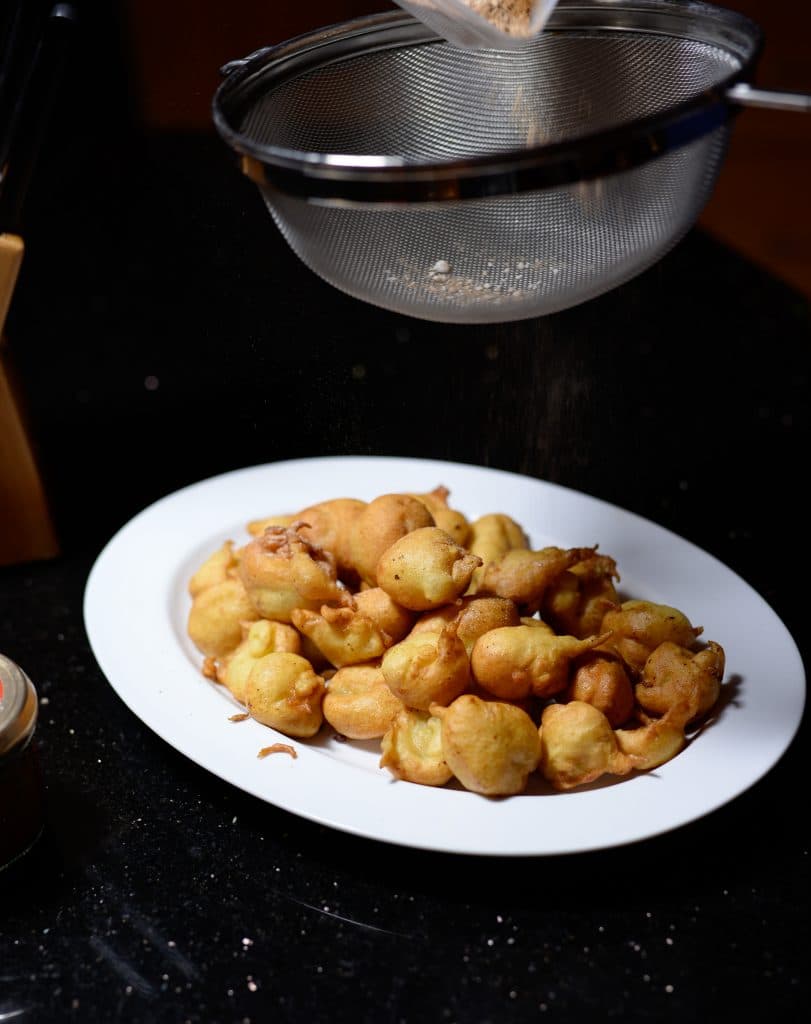 We set the mood first by putting on sega music. This is the traditional music of Mauritius and like its food, has turned into a fusion.  The sega music mixed with reggae is called seggae.  It is an African sound with island character.  The origin of the sound comes from the music of the slaves that were brought to the island. The words are in Creole and the sega is danced without the feet leaving the ground, only the rest of the body moves.

We decorated with the colors of the Mauritian flag; red for the bloodshed of slavery and colonization, blue for the Indian Ocean, yellow for the golden sunshine and green for the lush vegetation.  Sugarcane and tea, along with a picture of the national flower, called the boucle d’oreille, completed the décor.

We began with the common, street snack food called, dholl puri.  This was two wraps made from yellow split peas which resembled a tortilla.  These wraps were then stuffed with a lima bean curry and coriander chutney and rolled all together like a burrito.  It was love at first bite!  The wraps can be filled any number of types of curries and chutneys.  Now I understand why this is one of Mauritius most popular street foods.

Next on the menu was a delectable octopus salad.  I love octopus and this is lovely way to enjoy it.  It was mixed with onions, chili, cucumber, sweet peppers and tomato.  The dressing was a lively one, made with oil, vinegar, lime juice, mustard seeds and a little salt and pepper; fresh and delightful!

For the main course, we savored the prawn rougaille; the delicious, spicy, tomato sauce is loved all over the island.  This one was made with extra-large shrimp.  It was quick and easy to make and was enjoyed alongside white rice.  It absolutely made us fall in love with Mauritius cuisine.

For dessert, a super easy to make recipe of Banana Beignets, basically battered pieces of bananas fried and then sprinkled with powdered sugar and cinnamon. A lovely dessert!

As we say goodbye to this beautiful, island nation, I leave you with this; back on April 15, 1896, Mark Twain’s ship arrived at Port Louis during a world lecture tour.  This is what he had to say in his book titled, Following the Equator.  “From one citizen you gather the idea that Mauritius was made first, and then heaven; and then heaven was copied after Mauritius”