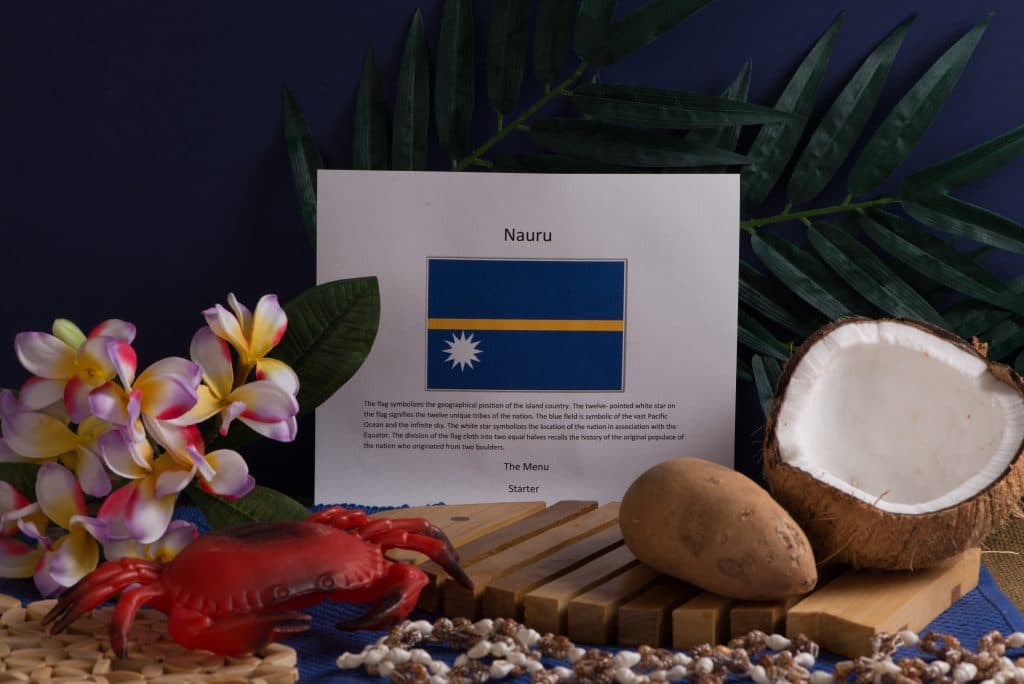 It is believed that the name Nauru stems from the Nauruan word, “anoero” which means “I go to the beach.”  It was previously known as Pleasant Island which was named in 1798 by the British sea captain John Fearn, a whale hunter.  He was the first westerner to visit this remote island.

Nauru is located in the southwestern Pacific Ocean and is part of Micronesia.  It is 35 miles south of the equator.  Nauru, the world’s smallest, island nation, is oval shaped and just eight square miles.  You can drive around the entire island in 20 minutes or walk it in under four hours.  It is surrounded by a coral reef which is exposed at low tide.  The island’s closest neighbor is Banaba Island in Kiribati, about 200 miles east.  It lies south of the Marshall Islands and north of the Solomon Islands.  Papau New Guinea is to the west.

Nauru has a population of just under 10,000 people.  The origin of the first inhabitants and when they reached the island remains a mystery.  It is believed however, that they are originally of Micronesian and Polynesian decent.  When the Europeans arrived there, the Nauruan society consisted of 12 matrilineal kinship groups, each having their own chief.  The language they spoke was Nauruan, which is a distinct language and the official language.  However, today English is also common.

In 1886, Germany annexed the island and incorporated it into Germany’s New Guinea Protectorate.  This lasted until 1914, following the outbreak of World War I, when the island was captured by Australian troops.  Thereafter it came under British control, until 1920.  Shortly after that the League of Nations gave Australia a trustee mandate over Nauru.  For a short time, Nauru was occupied by Japan, during World War II.  In 1947, the country was run again through the United Nations’ Trustees, mostly administered by Australia.  Nauru became independent in January of 1966, and became the world’s third smallest, independent republic.

Why all the interest in this tiny island?  Phosphate, or bird guano, is the reason.  In the 1970s and 80s, the tiny island had the highest GDP in the world due to its phosphate reserves.  Unfortunately, the mining effort left 80 percent of the land in ruins.  There was mismanagement of the funds from the mining efforts and now the island has little to no natural resources and is near bankrupt.  Even tourism is difficult because there are only two hotels on the island.  Today the island gets most of its funds from Australia, as it is used as a detention center for refugees seeking asylum in Australia.  The conditions are poor, and receive criticism from the International community.  Virtually all food, water and manufactured goods are imported from Australia.  They do sell some commercial fishing licenses which helps with a portion of their GDP.

Most Nauruans are Christians, as missionaries were the first outsiders to arrive on the island in 1899.  Most islanders are Protestant and about a third are Roman Catholic.  People live scattered along the coastal zones with one small village, called Buada, which is inland near the lagoon.  This lagoon was used to raise fish before the phosphate industry took off.  There are efforts underway to try and restore the land from the damage sustained during the mining operations.  Rainfall is collected from roof catchment systems and they now have a much needed desalinization plant as there are no rivers or streams on the island.  There is a fertile belt that surrounds the island and the lagoon.  Subsistence crops consisting of coconut palms, pandanus, bananas, pineapples and some root vegetables are still not enough to support the population.  It is, however, a stopover for migratory birds.  The red, frigate bird, with its large, inflatable, balloon-like chest, is an important symbol to Nauru and they are still used to locate where the fish are most plentiful in the Pacific.  Of course seafood is also abundant.  The extraction of the phosphate left irregular, pinnacle-shaped, outcrops of limestone that are described as forbidding and otherworldly.

As we look into the cuisine of Nauru, the subsistence crops are used to make traditional dishes.    Coconut is used in nearly every way imaginable.  Unfortunately, most food items that are brought in are processed foods.  It is for this reason that Nauru is the most obese nation on earth, with most of the population suffering from diabetes.  I chose to cook a meal based on island traditions and using the crops they have available, although in limited supply.

So let’s enjoy a Nauruan Meal: 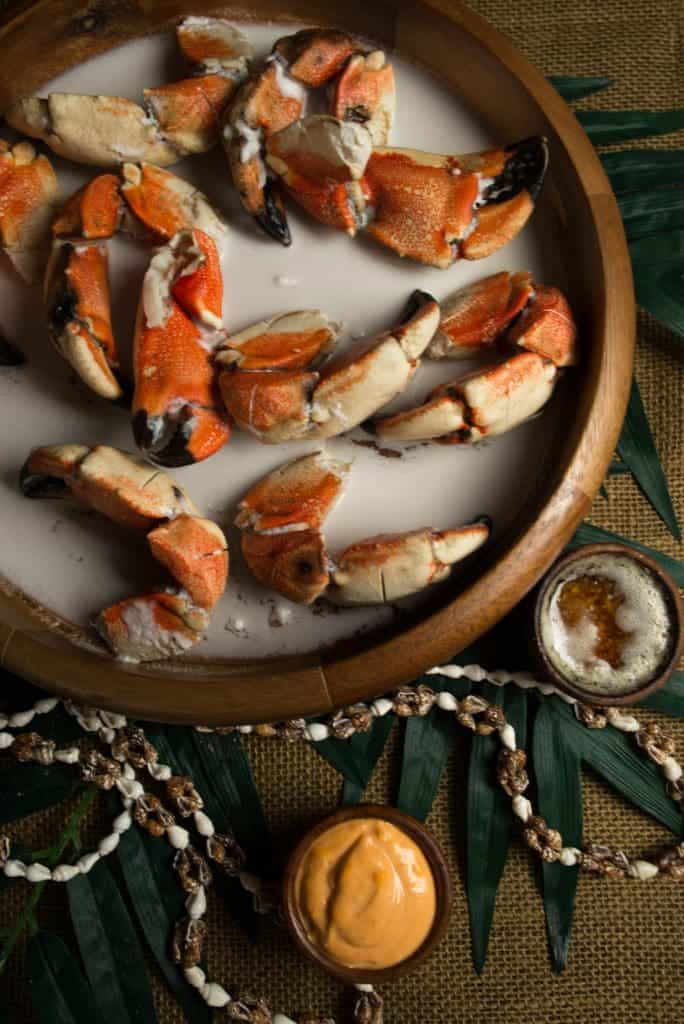 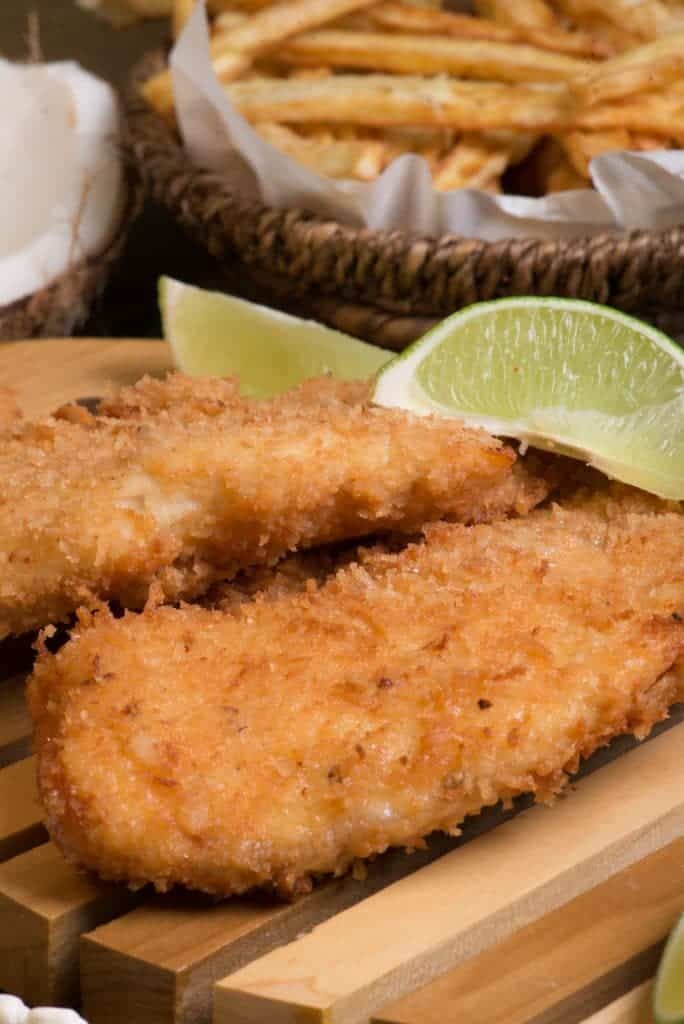 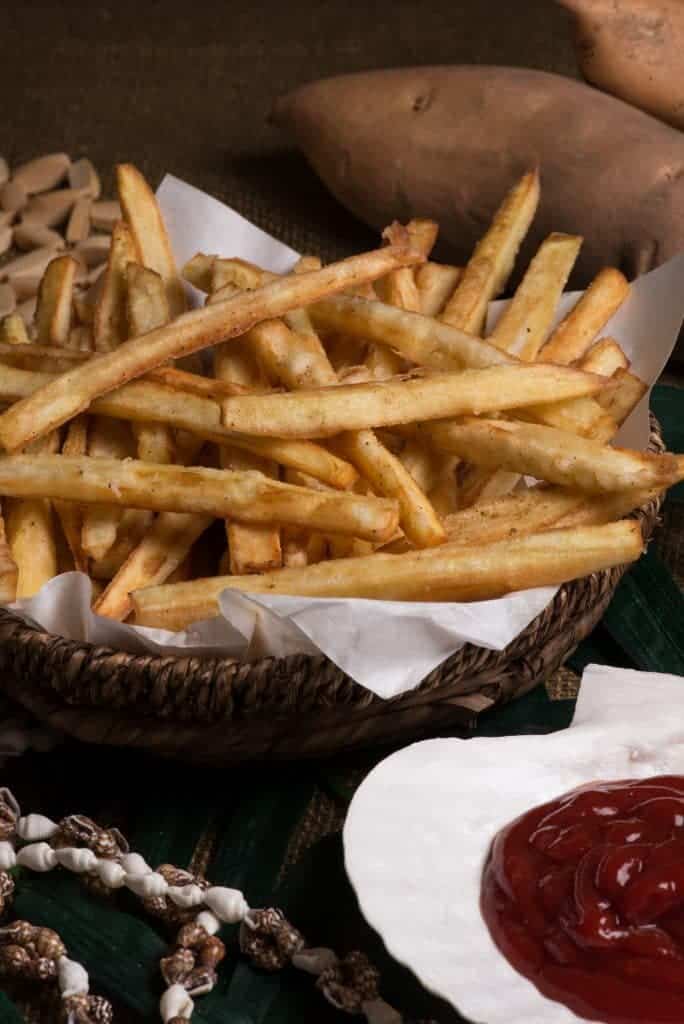 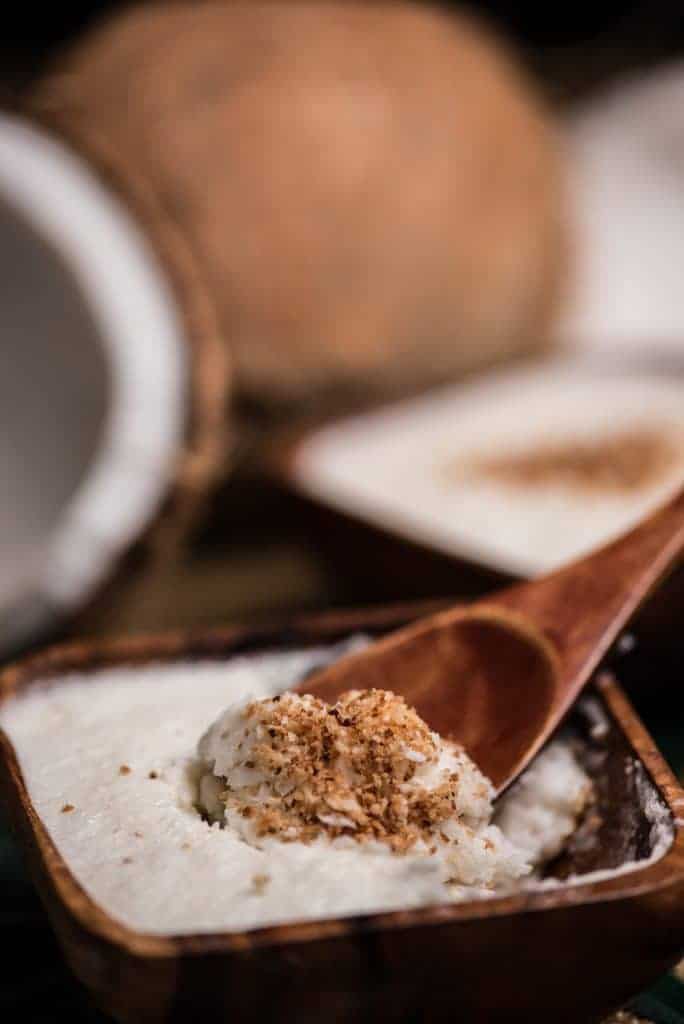 We set the table with coconuts, crabs, shells, frangipani and palm fronds.  We said “Yeyi Ko” which means, “Let’s eat” in Nauran.  We began with an appetizer made of crab claws cooked in coconut milk.  Crabs are plentiful there and delicious.  The sweet, claw meat was dipped in two sauces.  One was made of garlic butter and the other of mayonnaise and sirachi.  Both were delightful.

Next, was the coconut crusted fish, served with sweet potato fries.  I made a little video to show how to grate the coconuts using an implement I proudly brought home from Tanzania.  It is called a goat, because as you grate the coconut it sounds like a goat chewing.  The bottom line is that freshly grated coconut is the secret to this outstanding dish.  The fish fillets are marinated in lime juice, dipped in flour, egg and freshly grated coconut and then fried.  It is quick, easy and superb!

We thoroughly enjoyed this alongside crispy, sweet potato fries.  (Be sure to check the recipe for the secret to making them crispy.)  The fries were dipped in ketchup.

For dessert, we used more coconut in the form of a mousse.  It was light, fluffy, sweet and oh so good!   “Ita” means “delicious” in Nauran and it was “Ita!”

As you can see coconut is the star of nearly every dish of this island nation.  We made a toast of our healthy and nutritious coconut water and said “Tubwa Kor” which means “Thank you very much!”

As we say goodbye to this tiny nation, we do so by heading to the beach.  It is a scorching 105 degrees here at home today.  So, I say “anoero”, meaning, “I go to the beach!”