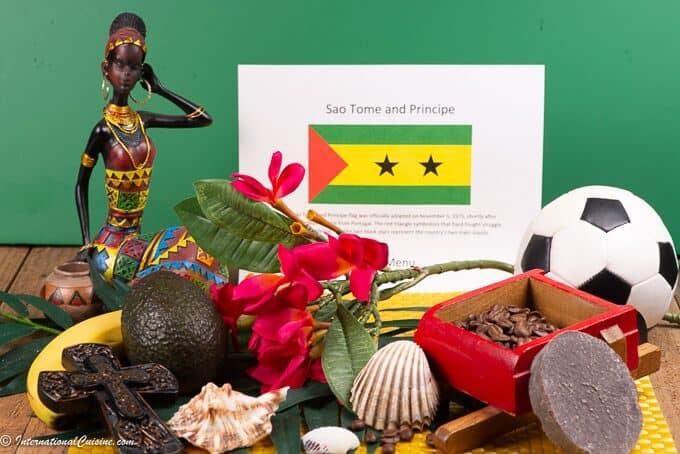 How did Sao Tome and Principe get their names?

The two, uninhabited, volcanic islands, that formed this nation, were founded by Portuguese navigators who arrived on Sao Tome on the feast day of Saint Thomas, in 1471.  Principe was originally discovered on St. Anthony’s Day, in 1472 and initially was named Santo Antao.  In 1502, the name was changed to Ilha do Principe or Prince’s Island, after the Portuguese prince who received the islands’ sugar crop duties.  The rich volcanic soil was ideal for setting up plantations to grow sugar.

Where is Sao Tome and Principe located?

The two islands are about 31 miles (or 50 km) apart and are located in the Atlantic Ocean, in the Gulf of Guinea, just north of the equator.  The closest neighbor is the West African nation of Gabon, about 186 miles or (300 km) away to the northeast.  The islands are part of the Cameroon volcanic, mountain line.  Sao Tome is about 30 miles long and 20 miles wide and is the more mountainous of the two islands.  Its tallest peak reaches 6,640 feet but its most famous peak is Pico Cao Grande; a landmark, skyscraper like, volcanic plug, which is also known as the Great Dog Peak.  It rises over 1000 feet above the surrounding terrain, with the summit being 2175 feet above sea level.  The islands feature striking rock and coral formations, lush tropical rainforests and beautiful beaches.  The climate is hot and humid, with an average temperature of 80 degrees.  The rainy season is between October and May, and annual rainfall can vary from 40 inches to 196 inches.

A Brief History of Sao Tome and Principe

The islands were discovered without any inhabitants.  The Portuguese discoverers felt the islands would be good locations for bases to trade with the mainland.  The first successful settlement of Sao Tome was established in 1493 by Alvaro Caminha, who received a land grant from the crown.  Principe was established seven years later, in 1500.  One problem they faced was attracting settlers.  So the first inhabitants, who were deemed “undesirables,” sent from Portugal, were mostly Jews.  Slave labor was brought in later, in large numbers, from the African mainland to work the sugar plantations.  By the mid-16th century the Portuguese settlers had turned the islands into Africa’s largest exporter of sugar.  The islands were taken over and administered by the Portuguese crown, in 1522 for Sao Tome and then in 1573 for Principe.

Competition from other sugar producing colonies began to hurt the islands.  Sugar cultivation started to decline over the next 100 years.  In the 17th century, the islands economy changed and was instead a transit point for ships engaged in the slave trade between the West and the African mainland.

In the 19th century, two new crops, coffee and cocoa, were introduced.  It didn’t take long for numerous new plantations, called rocas, to occupy almost all of the good, rich volcanic farmland.  The rocas were mostly owned by Portuguese companies or absentee landlords. By 1908, Sao Tome became the world’s largest producer of the highly sought after cocoa, which remains an important crop today.

Unfortunately, the system of rocas, led to abuses against the African farm workers.  Although slavery was officially abolished in 1876 by the Portuguese, the practice of forced paid labor continued.  Years of uprisings eventually culminated into what is known as the “Batepa massacre,” which was a clash between African workers and their Portuguese rulers.   Several hundred African laborers were killed in the massacre.  This was a major turning point in 1953, which later became a memorial, observed each year on February 3rd, by the government.

Sao Tome and Principe achieved peaceful independence on July 12, 1975.  In 1990, Sao Tome became one of the first countries to undergo democratic reform.  They held non-violent, free and transparent elections.  Although the country has had a few uprisings since that time, it has a reputation for being a safe and democratic society, that functions under a multi-party system.

The population of both islands is currently about 213,000.  All are descended from various ethnic groups that have migrated to the islands since 1485.  There are six different groups:  Mestizo, or mixed heritage is the first group, and are descendants of Portuguese colonists and African slaves.  They are considered the “Children of the Land.”  Angolares, are descendants of Angolan slaves, who survived a shipwreck in 1540.  Today most Angolares earn their livelihood as fisherman.  Forros, are descendants of freed slaves.  Servicas are contract laborers, who lived only temporarily on the islands.  Tongas, are the children of Servicas, who were born on the islands.  Europeans, mostly Portuguese, and some Asians, make up the balance of the population.

Due to its diverse population Sao Tome and Principe have four official languages: Portuguese, Portuguese creole (called Forro), Angolar and Principense.  French, however, is learned in school and the country is a member of Francophonie.  Almost the entire population belongs to either Roman Catholic or Evangelical Protestant religions.  However, there are others religions practiced there because of the Freedom of Religion Act.

It is no surprise that music plays an important role.  Santomaen’s are known for ussua and socope rhythms, while Principe is home to the dexa beat.  It is believed that Portuguese ballroom music played an integral role in the development of these rhythms and dances, as well as musical traditions from various regions of Africa.   They are also known for tchiloli; a dramatic story told through music, dance and theatre.

The two biggest influences on the cuisine are their location and from the origin of the inhabitants.  African and Portuguese cuisines blend together into a wonderful fusion of flavors.  Of course, being islands, seafood plays an important role.  Fish is their main source of protein, which is often eaten with indigenous root crops.  Breadfruit and jackfruit are both very popular.  Other staple foods are beans, maize and cooked bananas (some seven varieties.)  Tropical fruits like pineapple, avocado, mango, bananas, soursop and things you have never seen, even in the most exotic produce section of your local market, also play significant roles.

Being a small, two-island nation, most of their food is imported from Portugal.  Calulu, is considered the national dish, which comprises smoked fish, palm oil and vegetables, along with peppers, to add spice.  Generally, they like their food with a little kick.  Many of their dishes are also flavored with local coffee; used like a spice, in sauces.  The national drink is palm wine, but they make a few beers and local rum as well.  Sao Tome, the capital with the same name, is home to the main market where imported items from Portugal such as sausages and salami stuffed in bread rolls can be found.  It is common to see grilled corn on sticks served as a popular street food.

So let’s eat a Sao Tome and Principe meal: 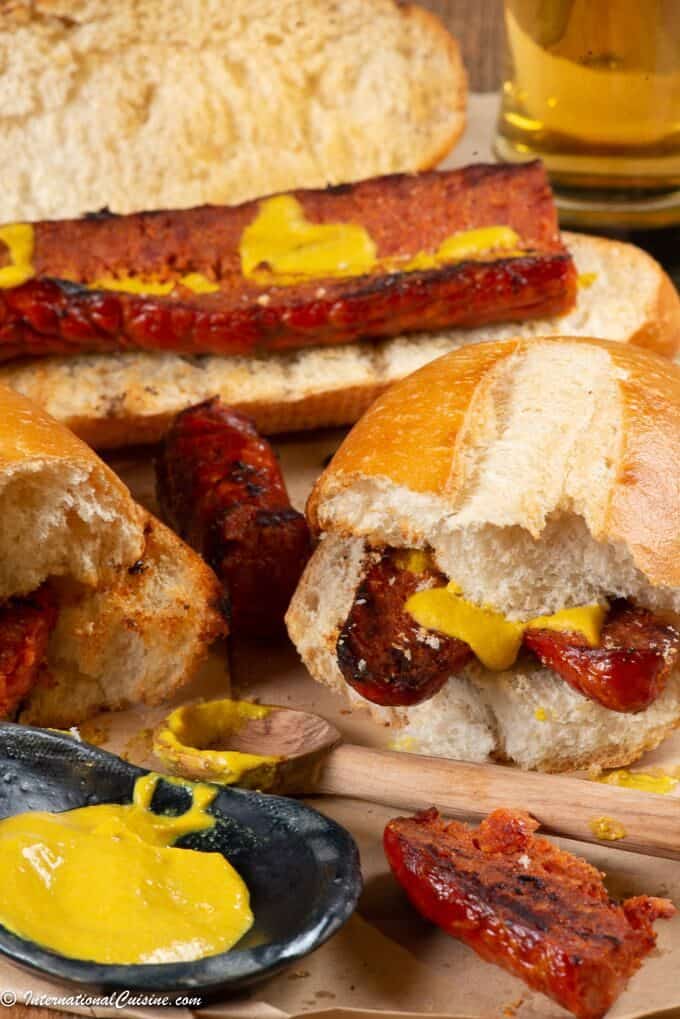 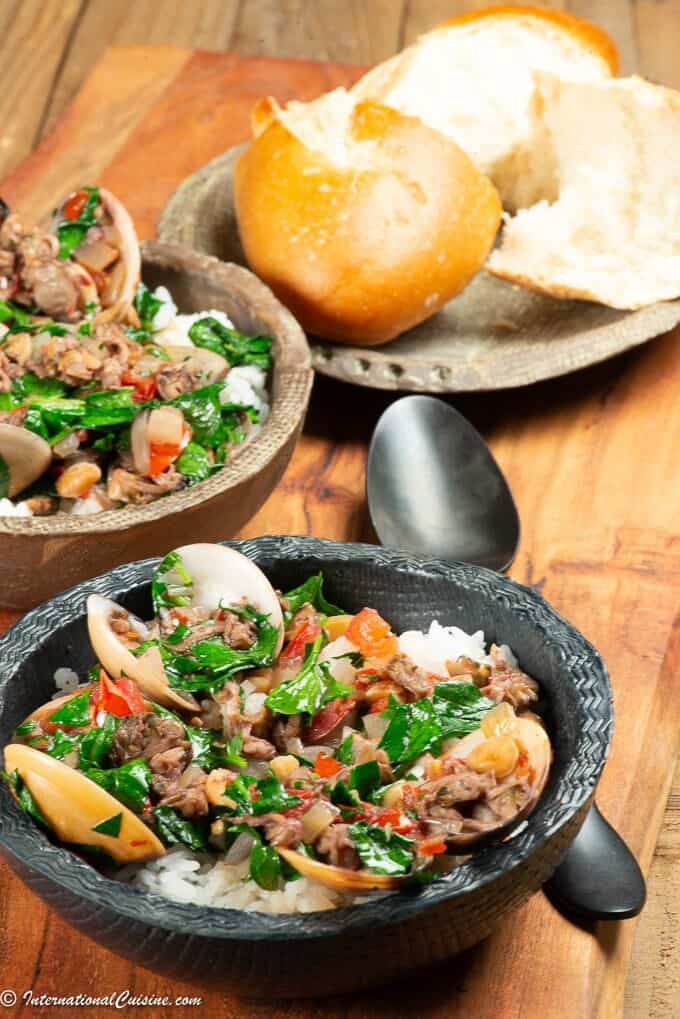 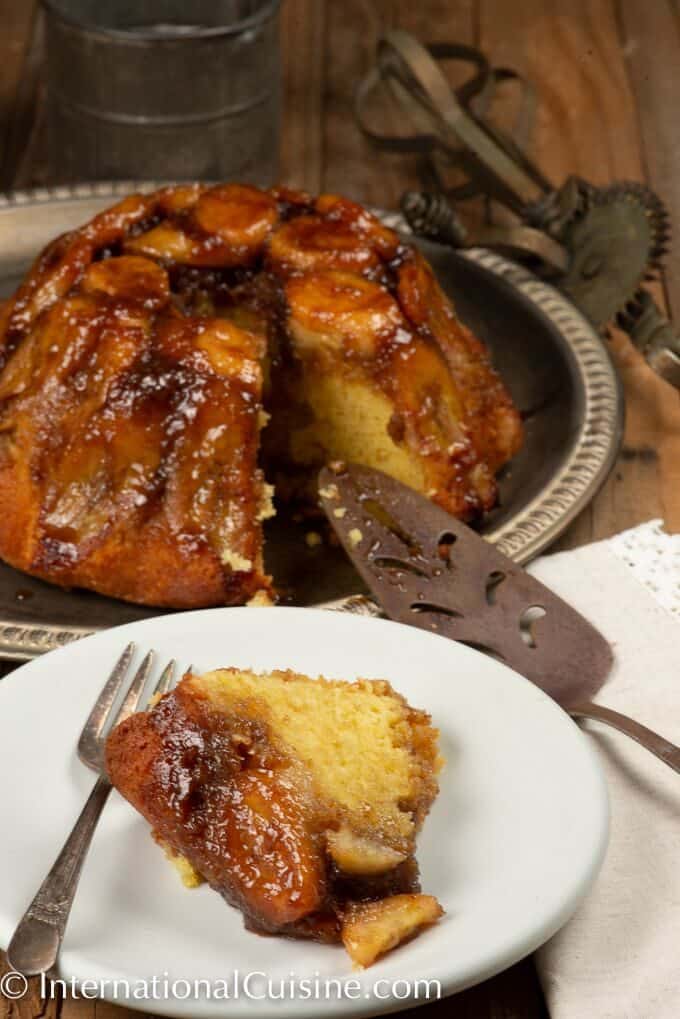 We set the scene with several of their staple ingredients: bananas, avocados, coffee and cocoa.  A palm leaf was placed to represent the tropical rainforests, along with a few exotic flowers and seashells.  A soccer ball was added, since soccer is the national sport, and a religious cross completed the scene.

The first course was one of my favorite things; a sausage sandwich.  Grilled linguica, is my “go to” Portuguese sausage and paired with a little mustard and bread, makes for a wonderful appetizer.  We enjoyed it with the famous Portuguese, Super Bock beer.

Our main course was called matata; a lovely clam dish cooked in port wine and served over steamed, white rice.  The dish was really quick and easy to make and was so delicious.  It was flavored with onion, tomato and spinach, with a touch of heat from red pepper flakes.  It also had a nice crunch from peanuts in the sauce.  It was a super easy, delightful dish that I will make often.

For dessert, we enjoyed banana bolo, or banana cake.  It is the topping that makes this dessert so amazing.  It is basically caramel, topped with banana pieces.  This was served slightly warm and was an absolute delight.  (Fair warning, you will want more than one piece.)  We savored this dessert with a robust cup of hot coffee.

As we say goodbye to this tiny, two-island nation, called Sao Tome and Principe, I leave you with  a saying that is heard all over the islands;  “Leve’ leve’,” which means, “Easy easy.”  It’s a simple saying that is good reminder to us to slow down, take our time, and enjoy all that life has to offer.