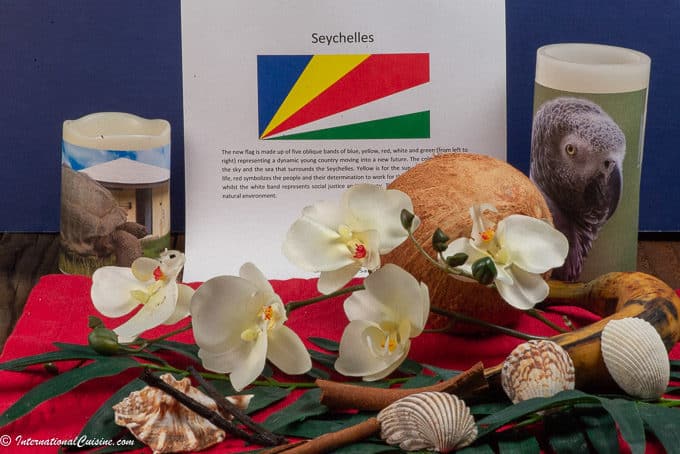 How did the Seychelles get its name?

Just hearing the name Seychelles conjures up dreamy, white sand beaches and oceans of every shade of green and blue.  It is known to be an island getaway and is very popular as a honeymoon destination.  It is pronounced, “Say-shells.”

The name of one of the islands, Mahe’, was renamed by the French in 1776 after King Louis XV’s Minister of Finance, Jean Moreau de Sechelles, named it “Isle de Sechelles.”  The name has since been anglicized as Seychelles and is applied to the whole archipelago.

Where are the Seychelles located?

The Seychelles are an archipelago of 115 islands.  The islands are located in the Indian Ocean, about 1000 miles off the coast of Kenya in East Africa, and northeast of Madagascar.  The Seychelles are considered to be part of Africa but they do meet at the crossroads of Asia as well.

The capital city is Victoria, which is on the largest island of Mahe.  About half of the islands are of granitic origin, with narrow coastal strips and ranges of hills.  The highest range is Morne Seychellois, which rises to just shy of 3000 ft.  The rest are coral atolls, many of which are uninhabited.  All together the islands are about the size of the tiny country of Andorra.

A Brief History of the Seychelles

The beautiful and bountiful islands were a must stop for early Islamic traders and they were known to be a sanctuary for pirates in the early 17th century.  In fact, to this day, it is thought the famous pirate known as The Buzzard, hid his treasure there, which still remains undiscovered.  The Seychelles were charted by both Portuguese and Asian explorers.  However, it was the French who originally inhabited and colonized the islands, having laid claim in 1756 to establish spice and coconut plantations.

The first settlers were slaves and French planters who arrived in 1770.  When they arrived, one of the biggest problems they faced were saltwater crocodiles.  It is believed they became nearly extinct around 1819.  It was ultimately the British who ended up with the Seychelles in 1814 as part of the Treaty of Paris, after the French Revolution and Napoleonic Wars.  The Seychelles became a crown colony, separate from Mauritius in 1903.

The British transformed the islands economically with the establishment of cinnamon, vanilla  sugar cane, coconut and tea plantations. They also built up the capital city of Victoria (renamed after the Queen).  There are many landmarks that remain today which were built in the early 1900s.

The Seychelles gained independence in 1976, which was then quickly followed by a coup and eventually socialist rule.  It has been a newly established, free country since the 1990s.  Tourism is the main industry, making up most of the country’s revenue.

Today the Seychelles is known for its pristine beaches, fishing, birding and scuba diving as well as a honeymooner’s haven.

The locals are called Seychellois and are a melting pot of cultures, mainly from Africa, Europe, India and Asia.  They speak Creole, English and French, all of which are official languages.  The Seychellois’ government is heavily invested in protecting the integrity of the Creole language.  The national newspaper is printed in both Creole and English.

The main religion is Roman Catholic, practiced by about 90 percent of the population, but there are members of other Christian denominations as well.  There are also Hindi Muslims and adherents to the Baha’i Faith.

Many Seychellois believe in ghosts.  In fact, there is an entire island, Moyenne Island, that is believed to be haunted, (many believe that is where the buried treasure is hidden.)  Shaman, known as bonom di dwa or man of the woods, are regularly consulted for solving problems through supernatural guidance.

The Seychellois family unit is matriarchal.  Institutional marriage is not widely practiced and unwed mothers are the societal norm.  The law, however, does hold fathers accountable for financial support for their children.  Nearly 75 percent of the children are born out of wedlock.  This structure is known as en menage and it carries no negative social stigma.

Under the constitution women enjoy the same status as men and comprise 45.8 percent of the total number of delegates; having one of the highest numbers of women in parliament in the world.  Despite the country being a land of many colors, racism is non-existent.

The original French settlers arrived with their legendary skills in the kitchen.  Their ability to blend spices and herbs was adapted to island living, where seafood is particularly abundant.  Coconut, mango, papaya, banana, pumpkin and the golden apple are often used to make tangy salads.  It is said that if you eat breadfruit on the Seychelles it will guarantee your return.  Pork, chicken and beef are available but seafood remains king.

When the British arrived, they added their influence to the Creole cuisine with tea, cakes, custards and crumbles, as well as corned beef.  This influence however was mild compared to what the Chinese brought with their love of noodles and rice, the Indians who introduced, curries, beans, chilies and dahls, and the Africans  who contributed their use of creamy coconut milk, cassava and bananas.  Add in the local spices such as: vanilla, cinnamon, nutmeg, allspice, and lemongrass and you get a fusion Creole that is simply mouthwatering.  Fruit bat curry is considered one of the Seychelles specialties along with boudin, a blood sausage, sausage rougay (pork sausages in a rich tomato sauce.)  Freshly barbecued fish and kebabs can all be found in the night markets.

So let’s enjoy a Seychellois meal: 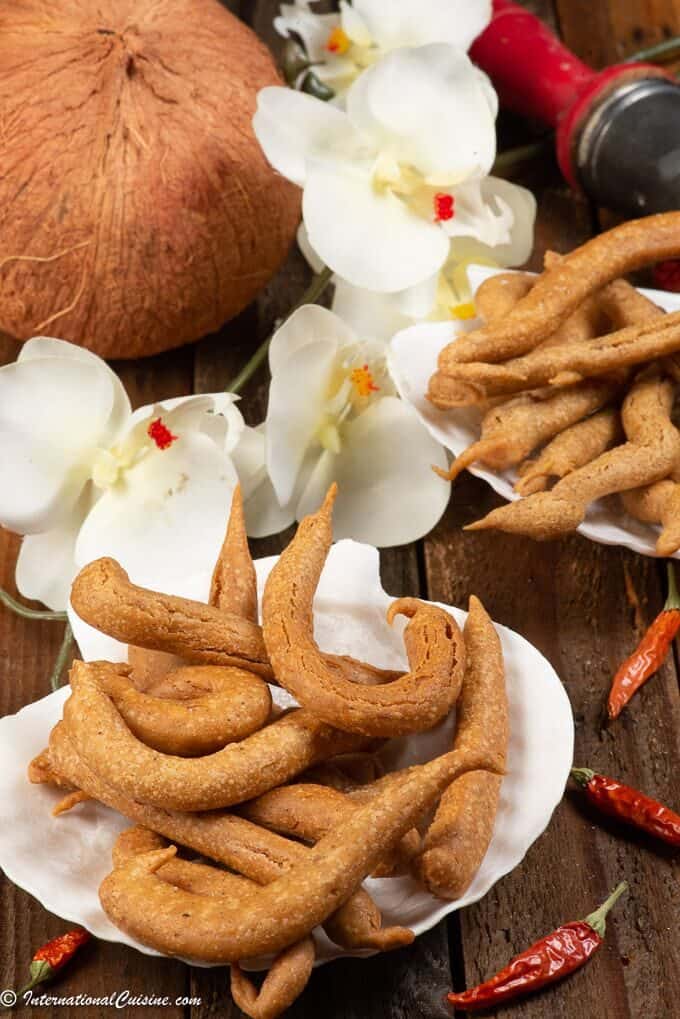 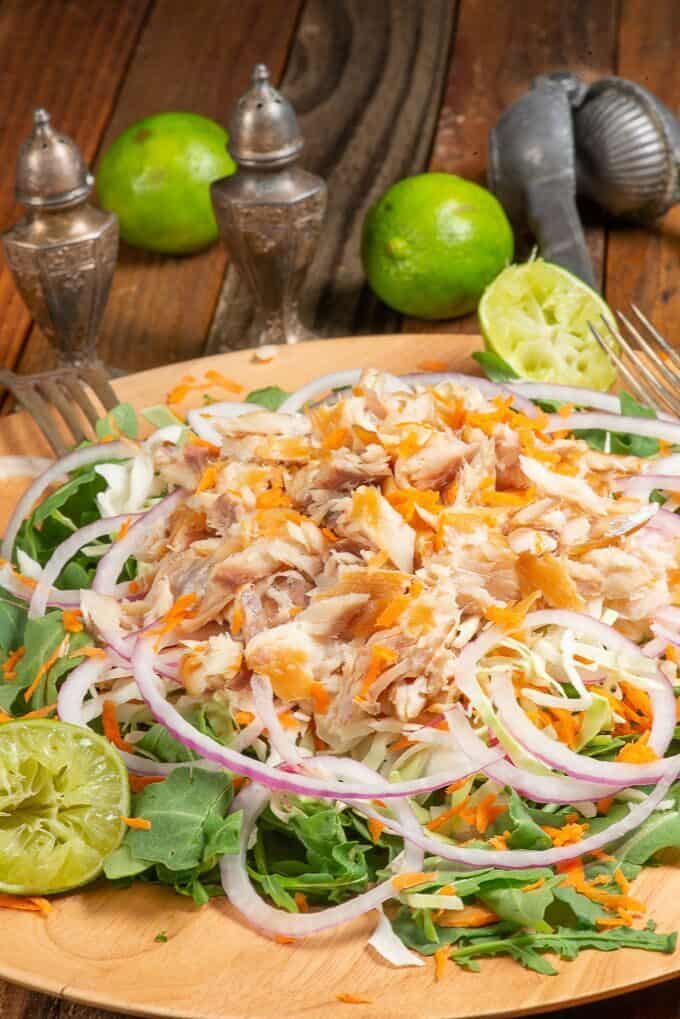 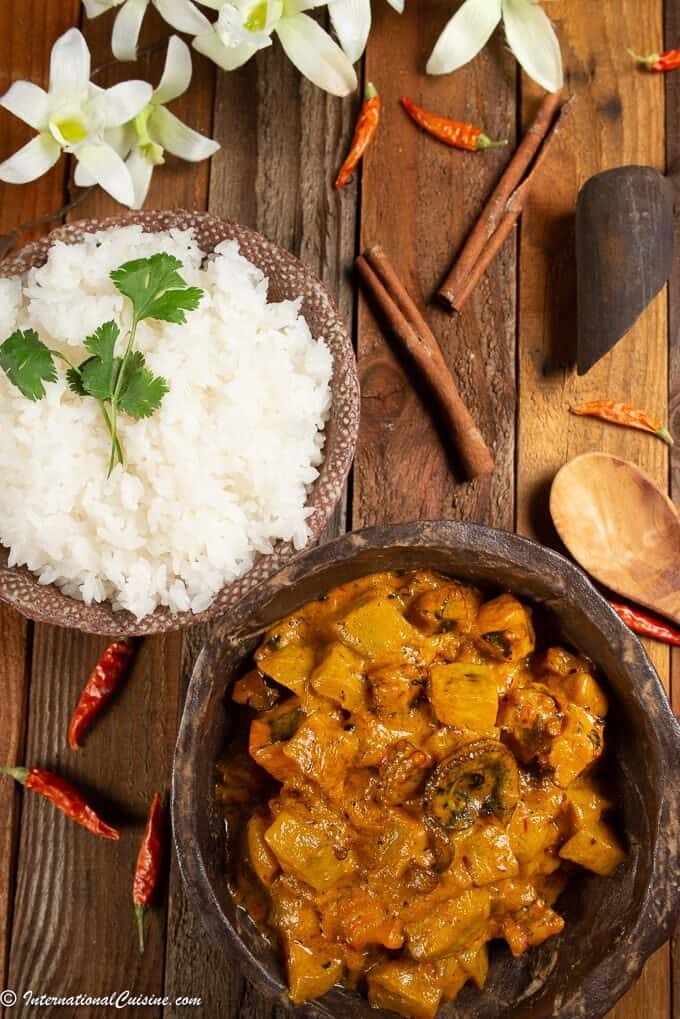 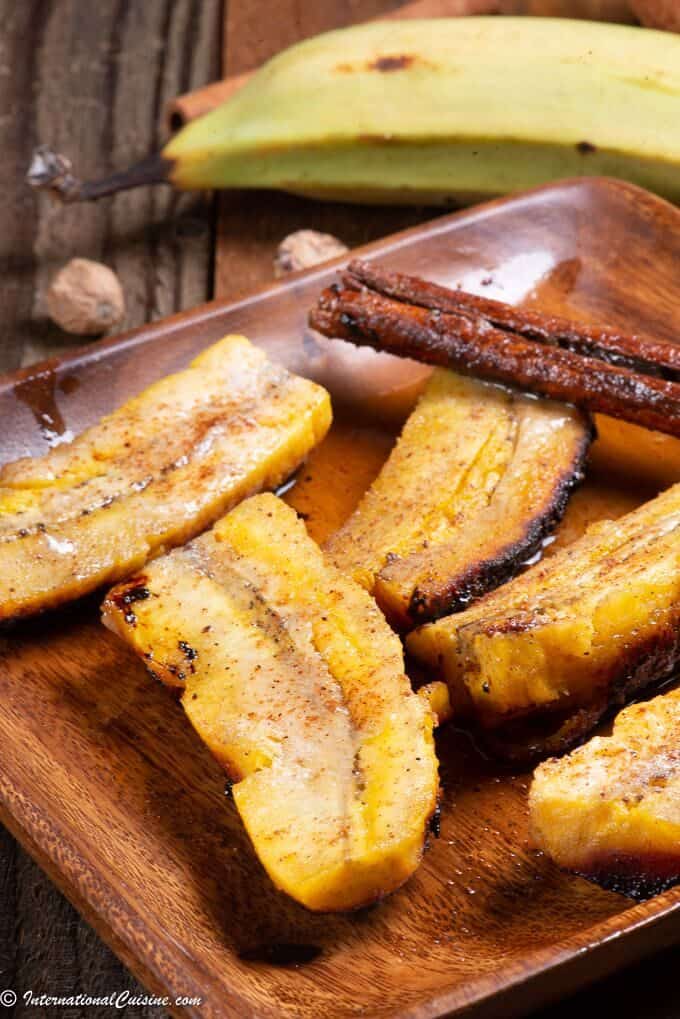 We set the scene with the national flower, an orchid, called tropicbird.  We included other tropical things like palm leaves, coconut and bananas to the décor, as well as cinnamon bark and the vanilla bean, as they remain huge exports.  A bit of sea life and shells were added, (after all it is the Seychelles.)

We lit two candles, one of which had a picture of the famous tortoise, named Esmeralda, who is still living at 170 years of age on Bird Island.  He is the biggest and heaviest, free-roaming tortoise in the world, weighing a whopping 670 pounds.  Bird Island is home to the largest wild Aldabra tortoise population in the world and is a UNESCO world heritage site.  Speaking of large, every visitor to the Seychelles will learn about the Coco de Mer or “Love Nut.”  It’s the largest seed in the world and stands out due to its voluptuous shape.  The other candle we lit had a picture of the black parrot, the threatened national bird.  With candle light glowing, we put on Calypso music to set the island mood.

For the first course, we loved nibbling on molouk, as it is called there.  In India it is called murruku.  Molouk is served in most bars on the islands as a popular snack.  They are made with rice and chickpea flour with added spices, such as hot chili powder and cumin.  The dough is drawn through a noodle press to shape it into thick noodles with curves.  We enjoyed them with an icy cold beer, which is also quite popular there.

For our next course we had the smoked fish salad.  Salads of all types are served in the Seychelles.  This one was made with smoked marlin, shredded cabbage, carrots and onions.  It was served with a lime and olive oil dressing.  I think I could savor this salad every single day.  A true keeper recipe from the Seychelles and I am certain any type of smoked fish would be equally amazing.

For the main course, we served octopus curry and quickly learned why some consider it the most famous dish in the Seychelles.  It is a creamy curry made with coconut milk but so flavorful as it is spiced with masala and chilies.  Octopus is one of my favorite seafoods and we absolutely loved this curry over steamed white rice.  The original version comes from the island of Praslin and is a must try recipe.

For dessert, we wanted to enjoy something with bananas.  The Daube de Banana was perfect.  Bananas are loved and abundant on the islands.  What an absolute joy to savor this dish with all the special flavors that come from the Seychelles like: vanilla, nutmeg, cinnamon and of course, coconut.  This was yet another perfect ending to an International Cuisine meal.  The Seychellois cuisine was reminiscent of delicious Mauritius, which makes sense since they share much of the same history.

As we say goodbye to the beautiful island nation of the Seychelles, I leave you with a poem written by  Terry Brewer called, Thoughts from the Seychelles Islands:

The sun carresses this granite isle

Where quietness rules the day.

The other world is sometimes grim,

here we smile, it is the Seychelles way.

Clinging to mountains with desperate wills.

Making cataracts where there are no drains.

In Victoria, the Cathedral clock strikes twice at noon

Why hurry, there’s time to do what is to be done

And time goes slower if you stand, so much quicker if you run.

We trade with the world, who know not quite where we are

Go to far distant lands with a skilled sailors ease,

Praslin Island is not too far away

The Garden of Eden, General Gordon did say

With the Coco de Mer in the Valley de Mai

Black parrots, peace and the silence of creation day

No airstrip yet intrudes and defiles

These untouched, unique, so, so beautiful isles.

Though there will be one soon, I’ver heard them say