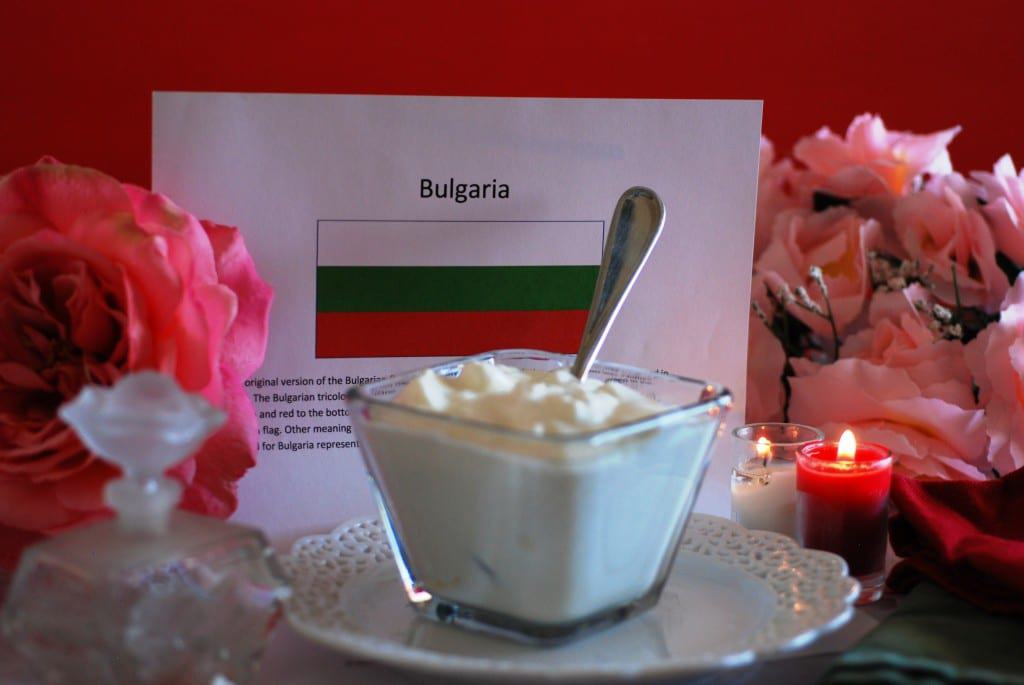 Bulgaria most likely got her name from a Turkic Verb meaning “to mix”. Ethnic Bulgarians attribute their ancestry to the melding of Bulgars, a central Asian Turkic people and Slavs, a central European group beginning in the seventh century. She gained independence from the Ottoman Empire March 3, 1878.

Located in southeastern Europe on the Balkan Peninsula, Bulgaria is bordered by Romania and the Danube to the north, Greece and Turkey to the south, Macedonia and Serbia to the west and the Black Sea to the east. Having a temperate-continental climate, characteristic for Central Europe, with hot summers and long cold winters, Bulgaria has four distinct seasons.

Ethnic Bulgarians are the bulk of the population followed by Turks and Romas (Gypsies). The official language is Bulgarian which is closely related to Macedonian. Turks speak Turkish and the Gypsies speak Romany. Orthodoxy is the official religion of Bulgaria however the constitution guarantees the right to free exercise of religion. Eight-three percent are Orthodox Christians, twelve percent are Muslim and the balance is a mixture of Jews and others. The Bulgarian government (along with the backing of the Orthodox Church), was one of only two countries that saved their Jewish population from being sent to Nazi concentration camps during the Holocaust. (Denmark was the other).

Speaking of religion, one of the must see tourist attractions in Bulgaria is a UNESCO site, “The Rila Monastery”, founded in the tenth century by the hermit, St. Ivan Rita, is one of Bulgaria’s most important cultural, historical and architectural monuments. Aside from the beautiful frescos, it also houses the famous “Rila Cross”; a wooden cross with 140 microscopic scenes from the Bible featuring more than 1500 figures. The largest of these figures is no bigger than a grain of rice.

Bulgarians have a unique and fun tradition of welcoming spring. Baba Marta “Grandmother March” is celebrated on the first day of March when friends and loved ones exchange red and white adornment bracelets called Martenits. They symbolize health and longevity. They wear them throughout the month until they see a stork or a blooming tree. They then tie these little red and white adornments to the tree (the storks prefer not be adorned). My sister was visiting Bulgaria on a Danube river boat cruise last March and got to see this incredible display of colorful, blooming trees during this special springtime event.

Another highlight of Bulgaria is their incredible folk dancing. The men and women don traditional Bulgarian outfits and strike up the music with a vast array of instruments such as: a goat skin bag pipe, end-blown flutes, bowed string instruments, a long-necked lute, large drums, hourglass drums and accordions. The tempo is lively and the dancers line up and hold the sash or belt of their neighbor cross handed and move to the compound meter of the music, kicking and clacking their heels. It is quite an amazing show of talent, stamina and tradition.

Bulgaria also brought the world the Cyrillic alphabet, which today is used in Russia and throughout the Balkans and other Slavic nations. The Alphabet was invented by two monks during the First Bulgarian Empire.

Bulgaria’s climate is ideal for growing grapes, roses and much of their own food. The country is listed 20th in the world for wine production, producing some 200,000 tons a year. The old tradition of wine making in this region dates back all the way to the Thracians (Old Stone Age, 100,000 to 40,000 BC). The roses grown in “Rose Valley” produce ¾ of the world’s rose oil, used in perfumes. The national flower of Bulgaria is in fact the rose. One-third of Bulgaria’s land is forested, ranking third in Europe for bio-diversity. It is home to brown bears, wolves, the golden jackal, wild cats, common otters and many species of reptiles.

Lactobacillus bulgaricus is a bacteria used to make their unique tasting yogurt. Bulgarians love their yogurt and consume it by itself and in many of their dishes. Found naturally in the air only in Bulgaria, they export the bacteria to many other countries around the world. This particular bacteria gets credit for the large number of people in Bulgaria who have lived past the age of 100.

Bulgarian food is delicious, fresh and hearty. They grow quality vegetables and have many organic dairy products. They use mild spices allowing the natural flavors of the organic ingredients to shine. Pork and chicken are the most common forms of meat, although fish, beef, veal and lamb are also eaten. They have a strong culinary culture where cooking traditions have been passed on from generation to generation.

The Bulgarian cuisine is diverse with influences from other Balkan cuisines as well as Middle Eastern cuisines; India and Persia. The mix of cuisines began way back during the First Bulgarian Empire, when trading was prevalent with herbs and spices from these other lands. Bulgarians are famous for their one pot meals, cooking the meat first, low and slow in water and later adding in fresh vegetables and spices. These one pot meals are cooked in a clay pot called a gyuvetche. They also love Lyutenitsa, considered to be a national relish. It is a spicy mixture of mashed and cooked eggplant, tomato, garlic, hot peppers and parsley. They use a special cheese called Sirene, which is added to their famous Shopska salad, served as a starter to most meals. The cheese is similar to a feta. The end result of their cuisine is a hearty and delicious combination of flavors. As I planned our meal for Bulgaria, it was difficult to narrow down, as there were so many wonderful and delicious options. 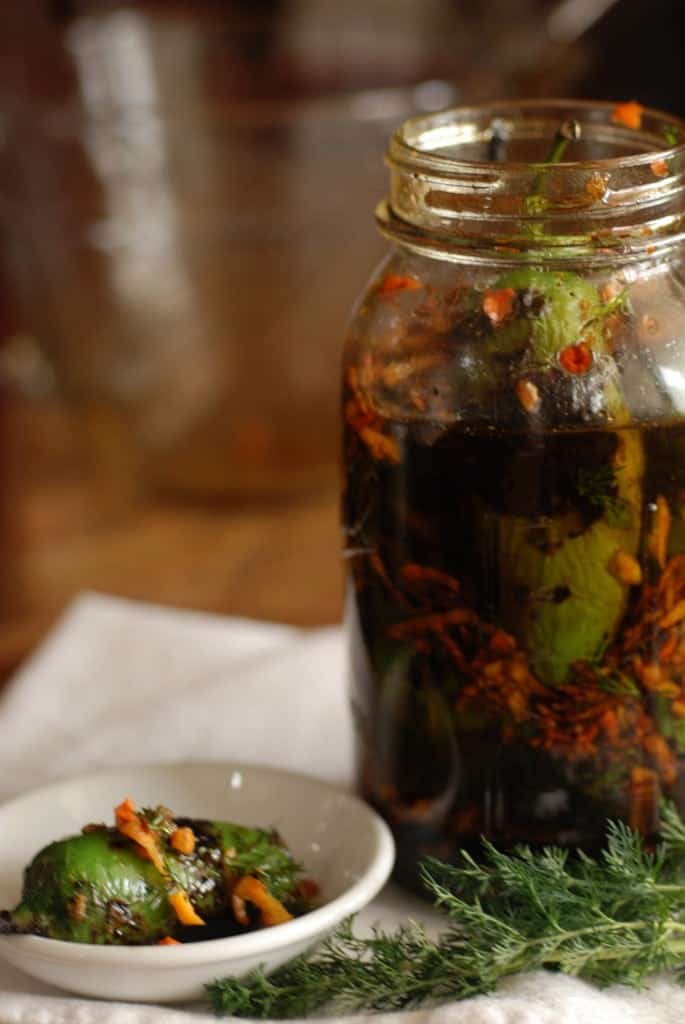 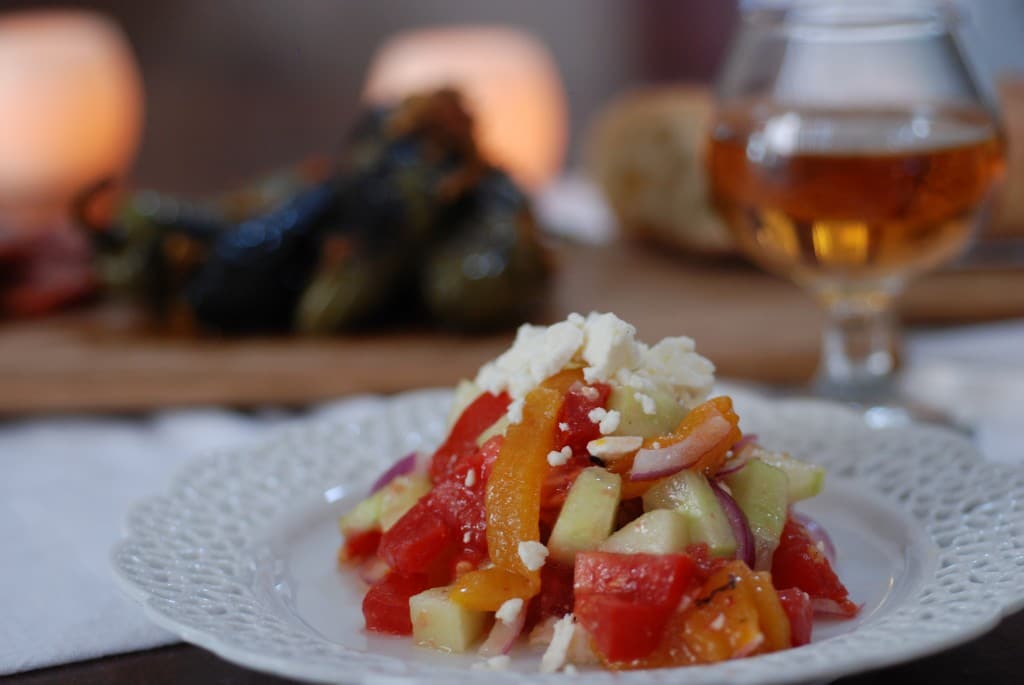 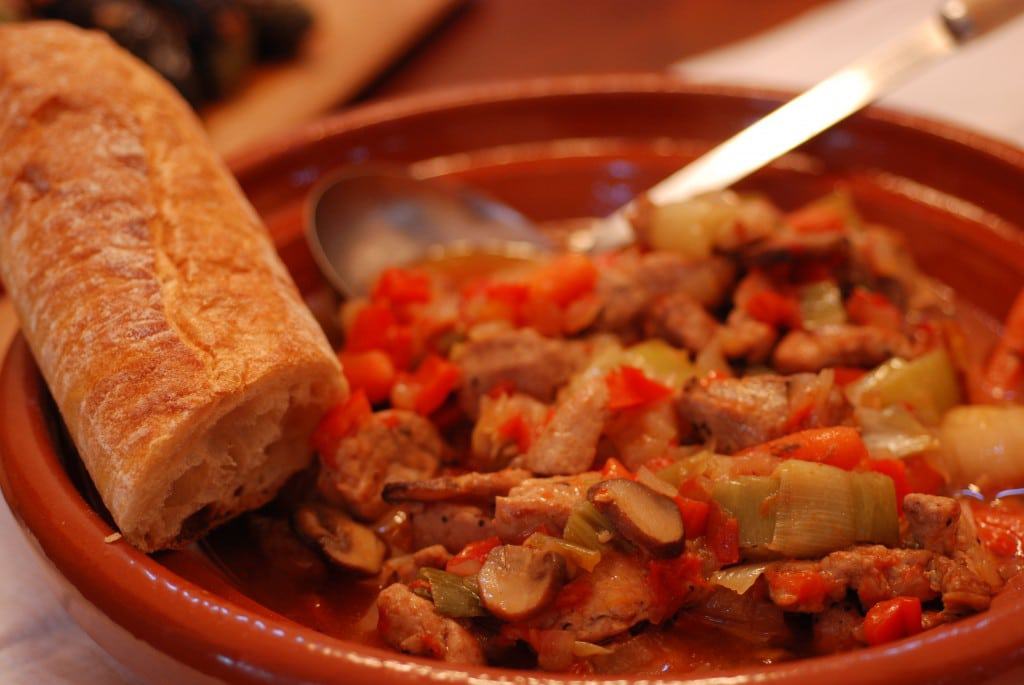 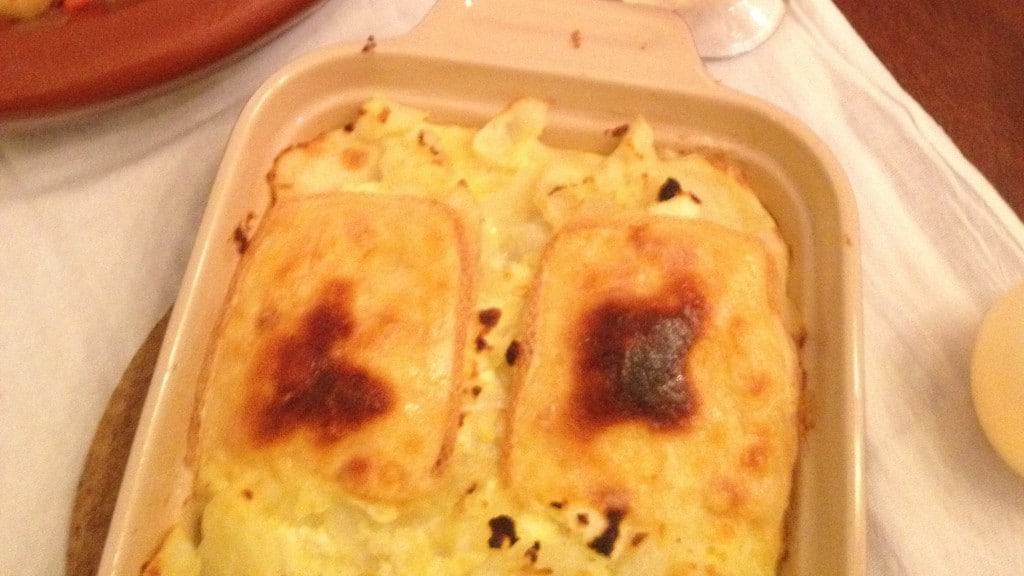 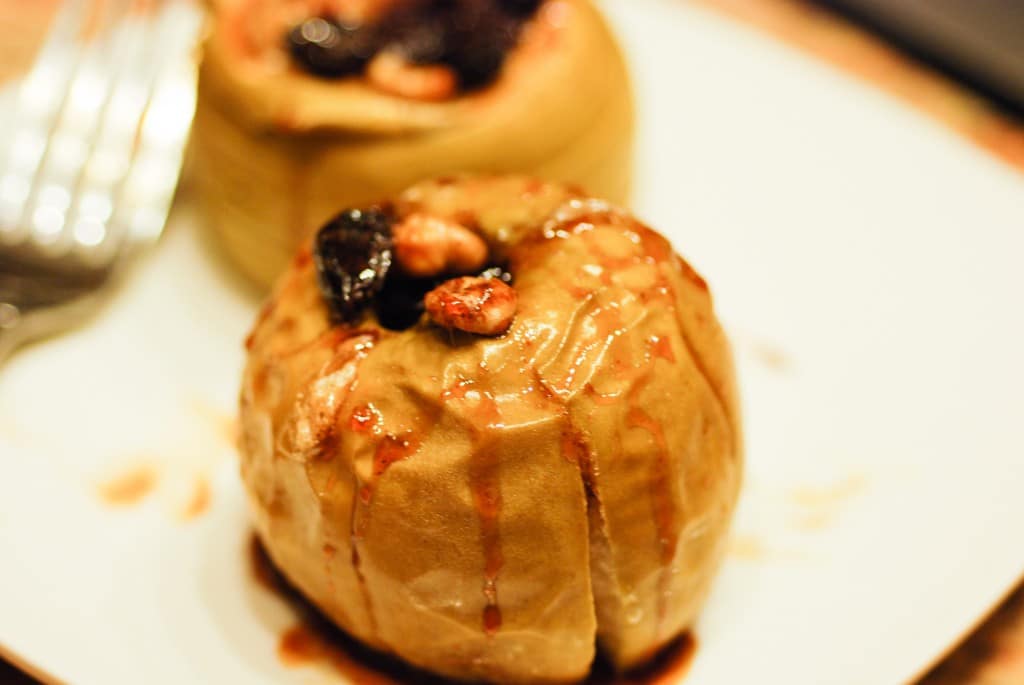 The table was set using the country’s national colors; red, green and white. We decorated with roses, their national flower. We enjoyed the meal continental style which would be customary there.

We began our meal with the unbelievable roasted and marinated chili peppers served with slices of Lukanka (Bulgarian salami) we also had some yogurt on the side to cool the palate.

Next was the most refreshing Shopska salad, topped with feta. (I could not find sirene cheese locally, the feta was a fine substitute.) We loved this salad that was simply dressed with oil and vinegar.

Next up was the main course, Kavarma. This slow cooked pork stew was awesome, tender and beautifully flavored with fresh vegetables; onion, leek, mushrooms, carrots, tomatoes and pepper, then just lightly seasoned with cumin, oregano and bay leaves. This was served alongside Bulgarian potatoes au-gratin, which were also delicious and went great with the stew. A baguette was added to the table to sop up that amazingly flavored stew gravy.

For dessert, apples baked to perfection, stuffed with walnuts and raisins that had soaked in brandy, created a wonderful combination of flavors. In the middle of the cored apple, I placed a little note wrapped in foil which said” Leko nosht I sladki sanishta” which means “Good night and sweet dreams.” This is a tradition of many Bulgarian cooks, especially around the holidays, to add a coin, a lucky charm or a note of good fortune and hide it in their desserts.

We enjoyed the meal with a lovely Bulgarian red cabernet sauvignon called Sparticus. We ended the meal with a toast of Rakia, Bulgaria’s national drink; a fruit brandy popular all over the Balkans. We lifted our glasses and toasted “Nazdrave”, meaning cheers. When I asked my husband if he loved the meal, he shook his head from side to side. Come to find out, in Bulgaria, Yes means No and No means Yes, by the shake or nod of the head, (he is so smart!) His shaking of the head meant he absolutely loved the meal, as did I.
Until next week,
Warmest regards,
Darlene