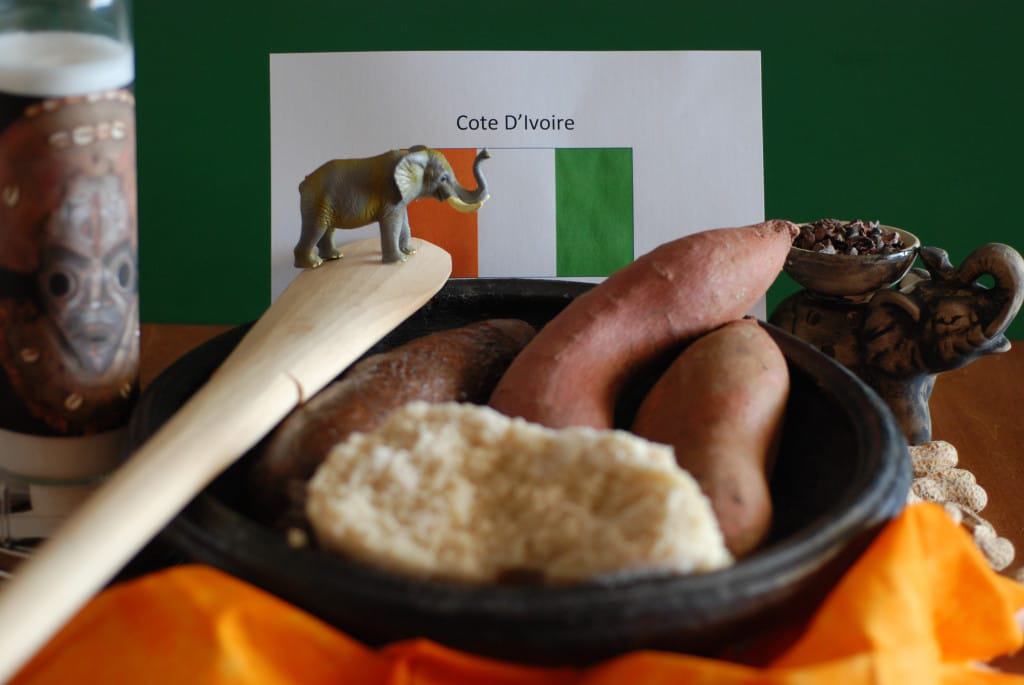 The Ivory Coast, is what the translation of her name is, from French to English. The name came from the profitable ivory trade which took place there during the seventeenth century. The trading of ivory did not last long, as it quickly brought about a massive decline in elephants. The trade virtually died by the beginning of the eighteenth century. Located in West Africa, Cote D’Ivoire is bordered by Ghana, Liberia, Mali, Burkina Faso and Guinea and the southern border is the Atlantic Ocean.

Although Cote D’Ivoire has a border on the Atlantic Ocean, the area is rough and without any sheltered harbors along its coastline. This was a blessing for the Ivorians, as the Europeans never made a permanent trading post for slaves there. She was a French Colony from 1843 until 1960, when Ivorians finally gained their independence. The French considered Cote D’Ivoire their “pet” colony and often referred to her as “the Jewel of West Africa.” After gaining Independence, she became politically stable and economic prosperity followed. However, that only lasted until the death of Dictator Felix Houphouet-Boigny in 1993. The country has suffered civil unrest, with many coups since then and has been unstable ever since.

The official language is French, although with nearly 60 different ethnic tribes living in the country, many indigenous languages are also spoken. The country is divided into four different cultural regions: the Akan in the Atlantic East, the Kru in the Atlantic West, the Voltaic in the northeast and the Mande in the northwest.

The capital city is officially Yamoussoukro but it is Abidjan that is the most populated and serves as the administrative center of the country. About half the population lives in urban cities. The constitution guarantees freedom of religion to all citizens. There is a mix of Muslims (about 40 percent) mainly in the north, Christians (about 35 percent) mainly in the south and those that have their own indigenous beliefs, making up the balance.

One of the legacies left by the Dictator Boigny is the Basilica of Our Lady of Peace, Yamoussoukro. It is a replica of St. Peter’s Basilica in Vatican City. It took four years to build and cost 300 million US dollars. It is the largest church in the world with an indoor seating capacity of 18,000, yet only a little more than three hundred worshippers attend the Sunday services. It was only filled to capacity twice. Once for the blessing of Pope John Paul II. This service was postponed for a year as the Vatican was not exactly pleased that its crown jewel was overshadowed by an African president’s replica. The Pope insisted the building could not be taller than St. Peter’s Basilica. The architect obliged by lowering the dome height but then placed a massive cross on top, making it 100 feet taller than the Vatican. The other event that filled the church was the funeral of the Dictator Boigny.

Today the church is maintained by clergymen appointed by the Pope, at the cost of $1.5 million dollars annually. “The size and expense of the building in such a poor county with an annual GDP of $650 is a delicate matter, to say the least” said a Vatican official. The Pope did stipulate that a hospital be built for the poor, which finally opened in 2012. Surprisingly, the Basilica of Our Lady of Peace, has somehow survived amongst intense civil unrest and violence.

About 75 percent of the population makes a living in agriculture, as the Ivory Coast is the largest exporter of cocoa beans in the world. They also export a substantial amount of coffee, bananas and palm oil. They are working on diversifying their economy, to be less dependent on agriculture, as price fluctuations in those markets are very unpredictable.

The different ethnic groups each have their own music and dance rituals, which are key to the storytelling of their ancestry. One of the biggest festivals of the Ivory Coast is called “Fetes de Masques”, a festival of masques. Many villages participate in this celebration to pay homage to the forested spirits, embodied by the villagers, who wear colorful costumes and masks (which showcases their fine woodworking skills.) The festival is held each November in a town called Man.

The Akan people celebrate the yam festival. They are part of what is known as the yam belt, which includes Nigeria, Ghana, Benin and Central African Republic. This yam belt provides 94 percent of the world’s yams. The festival serves several purposes. It is a memorial service for the dead and a celebration of thanksgiving for a good harvest. It is also a ritual of purification to keep away evil spirits. Finally, it celebrates the original Akan chief, who is said to have risked his life by taking the first taste of a yam in the kingdom. (“I yam not afraid,” he said)

The cuisine in Cote D’Ivoire is similar to its West African neighbors, with tubers, such as yam and cassava, ground nuts, millet, corn and rice, used commonly. Meat is a luxury, however chicken is served at special occasions. Fish and fried plantains are common in the coastal areas, while the familiar fufu, served with spicy stew sauces, is considered the national dish. They like it spicy there, using very hot peppers in most dishes.

The meals are often cooked in what is called a calabash. This vessel is used for many purposes including: washing hands before a meal and doing dishes afterwards, cleaning clothes and bathing children as well as being played as a drum. Often wealth is determined by the number of calabashes a household possesses. Subsistence farming is also an important means of income to many Ivorians, selling their extra produce in the open village markets.

They have small, open-air restaurants, called Maquis, where authentic Ivorian cuisine is served.  Attiéké is a classic dish of fermented and grated cassava, served as a side dish with Kedjenou, a slow cooked chicken stew. This dish is made in a tightly sealed clay cooking pot, called a canari and placed on hot coals. The canari is gently turned or shaken as the chicken cooks, making sure that no steam escapes. The result is exceptionally tender chicken, cooked in its own rich juices. 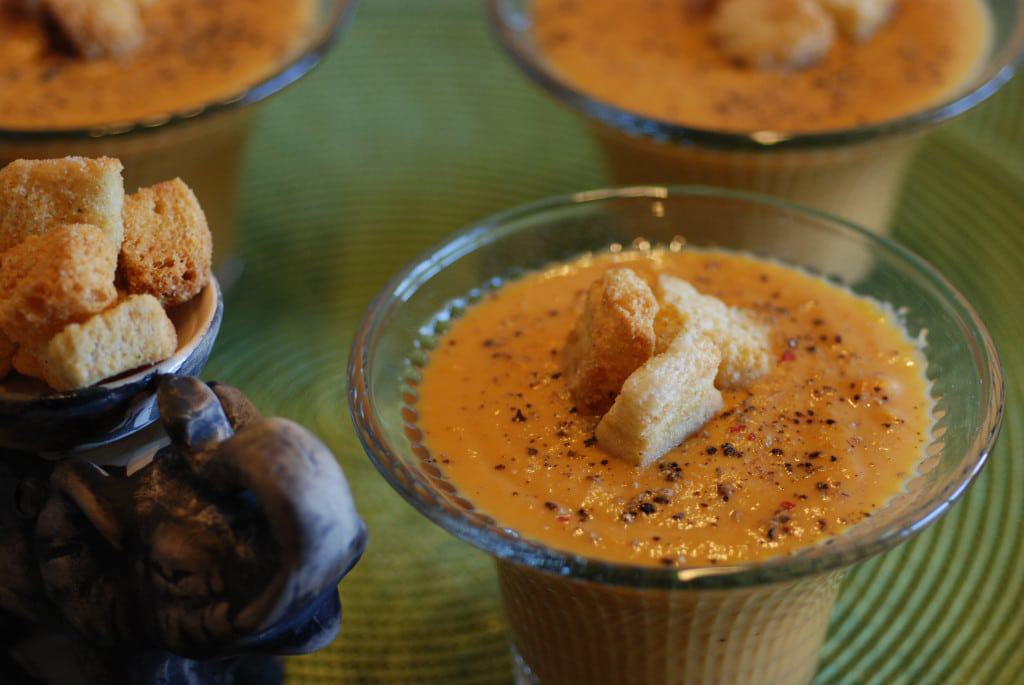 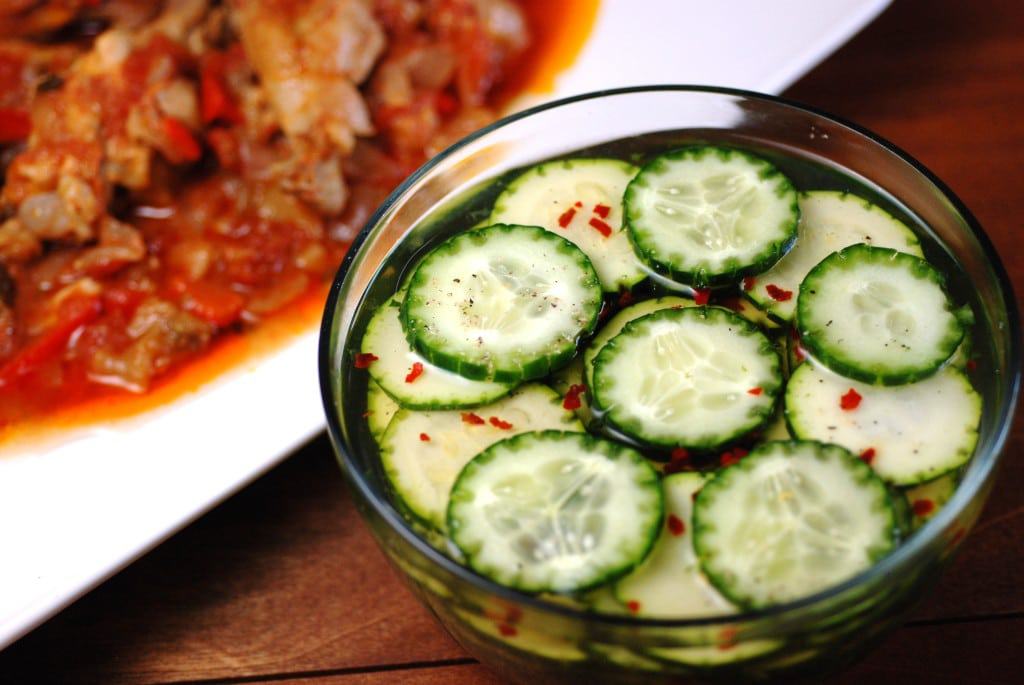 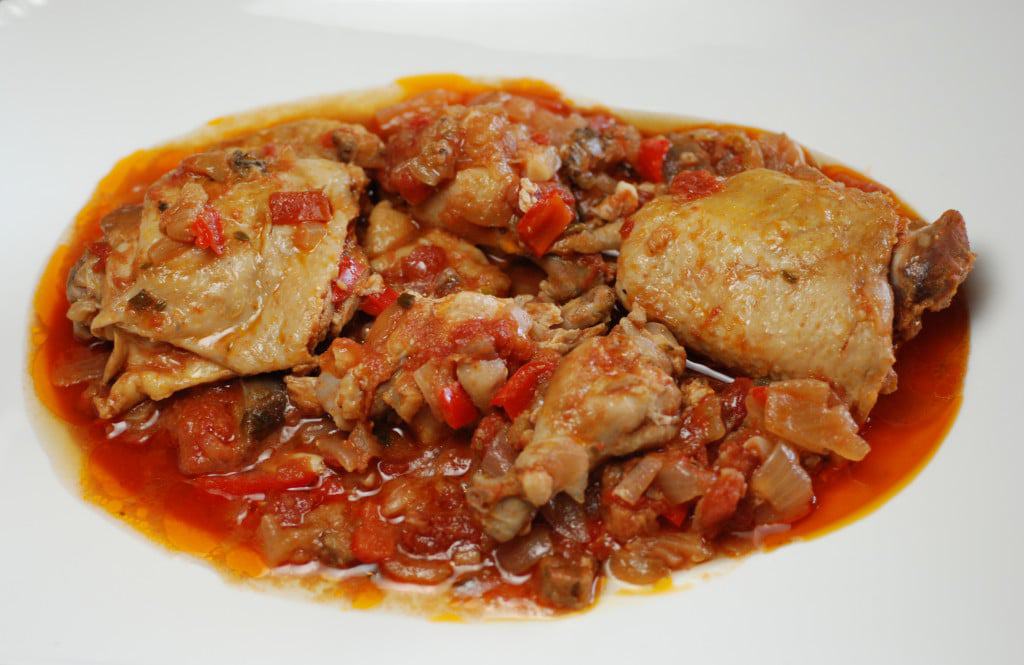 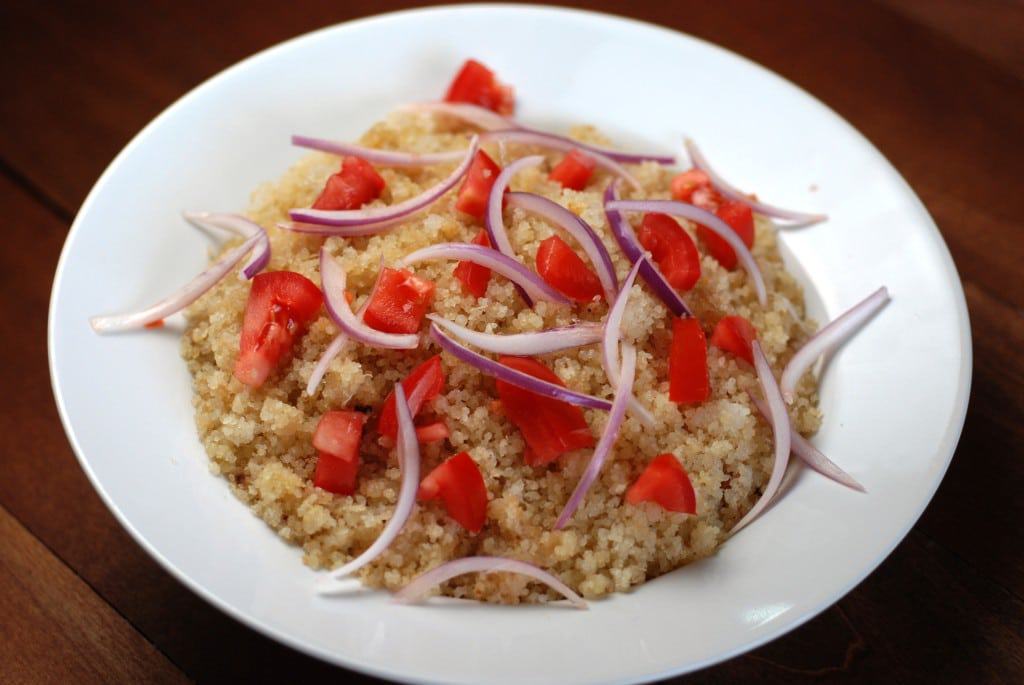 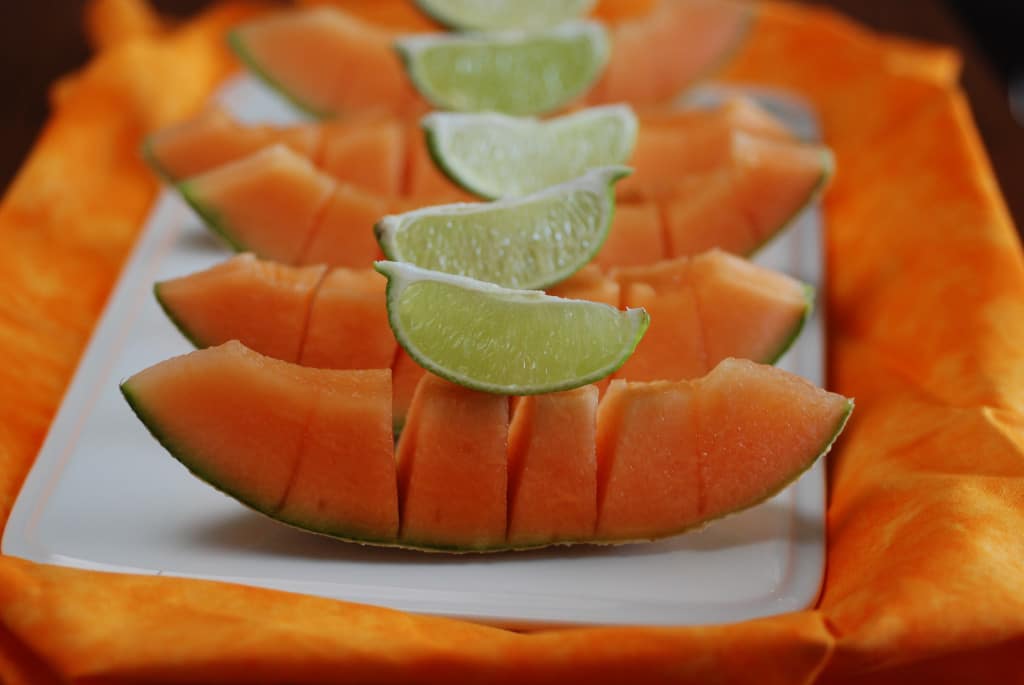 We set a mat on the floor and decorated with the colors of the flag; orange, white and green. Orange represents the savanna grasslands, green represents the coastal forests and white represents the country’s rivers. We also used elephant figurines, as they are considered the national animal of Cote D’Ivoire.  Pictures of African masks donned our candles giving the sense of flickering tribal spirits. We began with a vessel containing warm, soapy water to wash our hands and we used only our right hand to eat, as would be customary there.

The first course was a delicious cream of yam soup, chosen in honor of the Akan yam festival. We loved it. I was only able to find red yams at my local grocery store but yams, from the yam belt, come in many different colors.

The next part of the meal was served all together. The main dish called Kedjenou, was awesome. This method of cooking, without allowing steam to escape, makes the chicken incredibly tender and sumptuous. I went to an African market to find the fermented cassava, called Attiéké. I bought it frozen but it is also available dried, in a box. It was steamed and had a similar consistency to couscous. However, it has a unique sourness to the flavor that was a lovely complement to the Kedjenou. We also prepared a cucumber and zucchini salad, which was basically pickled in a sweet vinegar with some red pepper flakes. We often make a similar salad of cucumber and red onion in vinegar, but this one was much better. The sweetness added to the vinegar created a perfect tang and the zucchini added a wonderful crispness. (I will keep this salad in mind, as I always seem to have an abundance of zucchini in my garden.)

For dessert, we enjoyed a simple slice of cantaloupe, with a touch of lime. Fruit is commonly eaten as dessert there. I also loved that our dessert matched the colors of their flag.

As we say goodbye to Cote D’Ivoire, we do so with hope that this African country too, will find peace and prosperity. After dinner we put on a movie called “Black and White in Color.” It was filmed on the Ivory Coast and won an Academy Award in 1976, for Best Foreign Language Film.