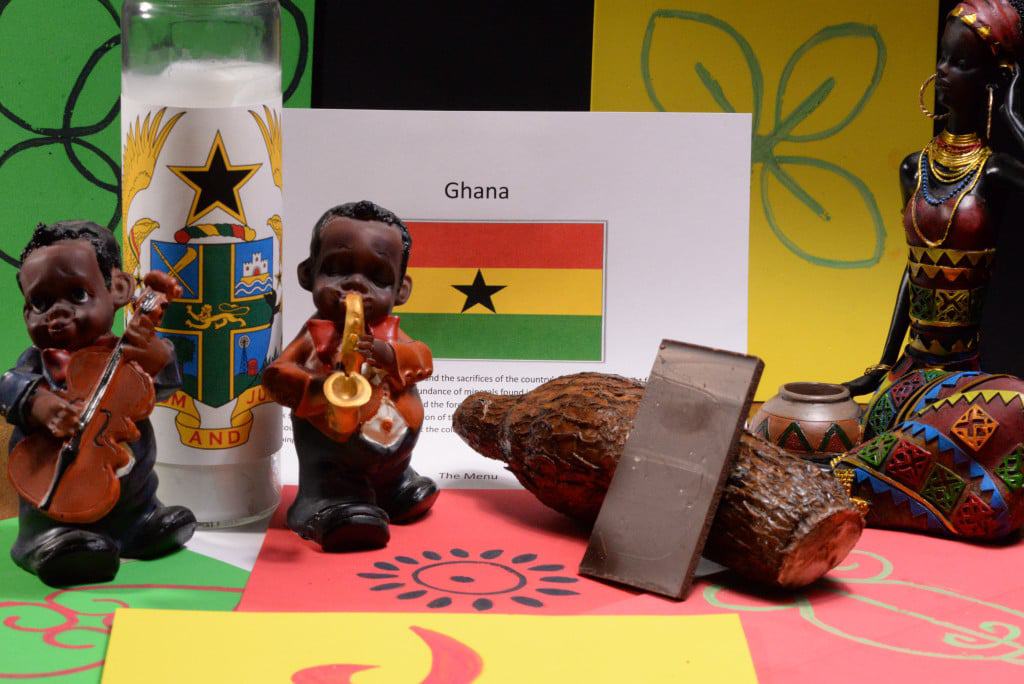 Ghana means “Warrior King,” as they were a big part of what was known as the medieval, West African Ghana Empire, between the 4th to 13th centuries. The Portuguese were the first Europeans to arrive in the late 1400s. The area became known as the Gold Coast, for it was rich with gold. Other European nations tried to make their mark on the area, to include the Dutch, Swedes and French, but it was the English who won and colonized Ghana.

Ghana is located in West Africa, her neighbors are: Cote d’Ivoire to the west, Togo to the east, Burkina Faso to the north and the Atlantic Ocean to the south. Accra is the capital city, strategically located on the coast. This coastal area housed many posts for trading slaves as well as gold, ivory and spices. Today many of the old posts still dot the coastline and serve as a reminder of their tragic past, which now draws many tourists. Ghana was the first sub-Saharan country to gain independence in 1957. English is the official language, however at least 80 other indigenous languages are spoken. The Ashanti are the largest ethnic tribe, also known as the Akan in Ghana. Akan and Twi are the two most common native languages spoken. Although Ghana is surrounded by countries that were colonized by the French, few Ghanaians speak it.

Ghana is often times looked to as the poster child for African countries during the post-colonization era. Their journey has not been easy, and they still faces challenges. Modern day Ghana however, holds democratic elections and has much to offer visitors with excellent food, music and natural beauty abounding. The country is mostly Christian, with a small Muslim population and of course animist believers. (Those with the worldview that non-human entities such as animals, plants, and inanimate objects possess a spiritual essence.) Ghana provides a freedom of religion mandate and children are taught tolerance in school. “Love your Muslim brother as you would your Christian brother,” is a good lesson for Ghana and the rest of the world as well.

The Ashanti are one of the few matrilineal societies in West Africa. Women are at the center of commerce and it is most evident at Ghana’s Kejetia market. Located in Kumasi, the Ashanti region’s capital, this open air market is the largest in all of West Africa. This is a place where all of Ghana’s crafts, fabric, produce, meats and supplies can be bought and sold. Visiting this central market is the perfect way to gain insight into the people and culture of Ghana.

Ghanaians love to eat and socialize and this is often done at what is called a “chop bar;” an open air restaurant where a local specialty is cooked and enjoyed amongst the guests, along with great dance music. “Highlife” is the musical genre of Ghana. This music marries Akan music with western instruments, like jazzy horns and guitars which lead the band. Highlife is now enjoyed all over the world and its beat and sound have been the inspiration for many popular songs.

Ghana is home to the largest, man-made lake in the world. Lake Volta is 3275 square miles and was created as part of their hydro-electric plan. Ghana supplies itself and surrounding countries with power. They are contemplating a nuclear power generation plant as well and have a couple of nuclear research facilities in the country. A 2007 discovery of oil has also brought economic promise. It is however, their natural resources and agriculture that bring them their greatest wealth. Gold, diamonds, bauxite, aluminum, magnesium and iron ore are but a few of their precious resources. Twenty percent of Ghana’s land is arable and besides growing a variety of crops, they are the second largest exporter in the world of cocoa behind the Ivory Coast. (They have plans to become number one in the world this year.) Clearly declines in commodity prices can prove devastating to a country like Ghana but we can only hope that their diversification will keep them on their growth path. The past Secretary-General of the United Nations, Kofi Annan, is from Ghana. Perhaps he will lend his knowledge and expertise of the world to help guide his country to prosperity.

Ghana has not had any confirmed cases of the deadly Ebola virus and was the chosen location for headquarters of the World Health Organization during the crisis, which just recently was able to close. Although Ghana’s government has made strides in healthcare and reducing hunger, they still suffer from infant and child mortality rates that are much too high as well as HIV/AIDS problems. They have one of the highest percentages of people living and dying of AIDS in the world. Another of their big health risks today is Malaria, transferred by the Anopheles mosquito. In the cities, healthcare for these diseases is available, however, in rural areas, it is severely lacking.

Ghana is a multi-cultural land that has managed a peaceful coexistence among the various ethnic groups. Festivals happen year round with each tribe having many reasons to celebrate. As we look into Ghanaian cuisine, it is as diverse and exciting as the country itself. It, of course, includes all the staple West African flavors that we have come to love; fu-fu, groundnut soups and stews, cassava, yams, tomato, onion, plantains and beans. Seafood is abundant along the coast, lakes and rivers, and meat is also available. It is however, the peppers that truly make their cuisine memorable. They make a variety of dishes and sauces using peppers that are simply magical. 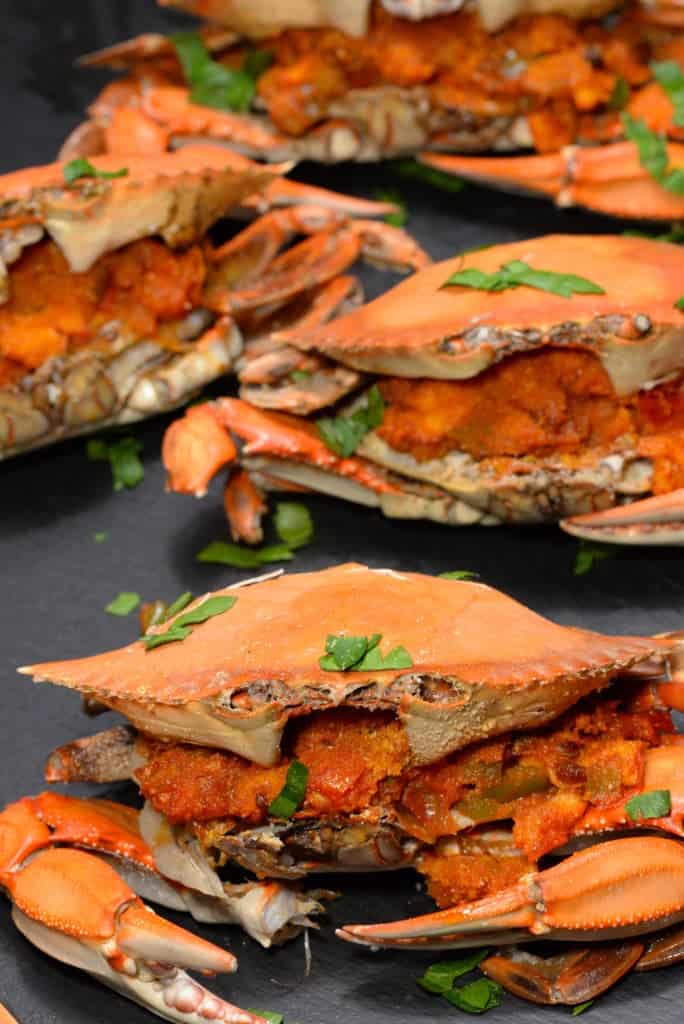 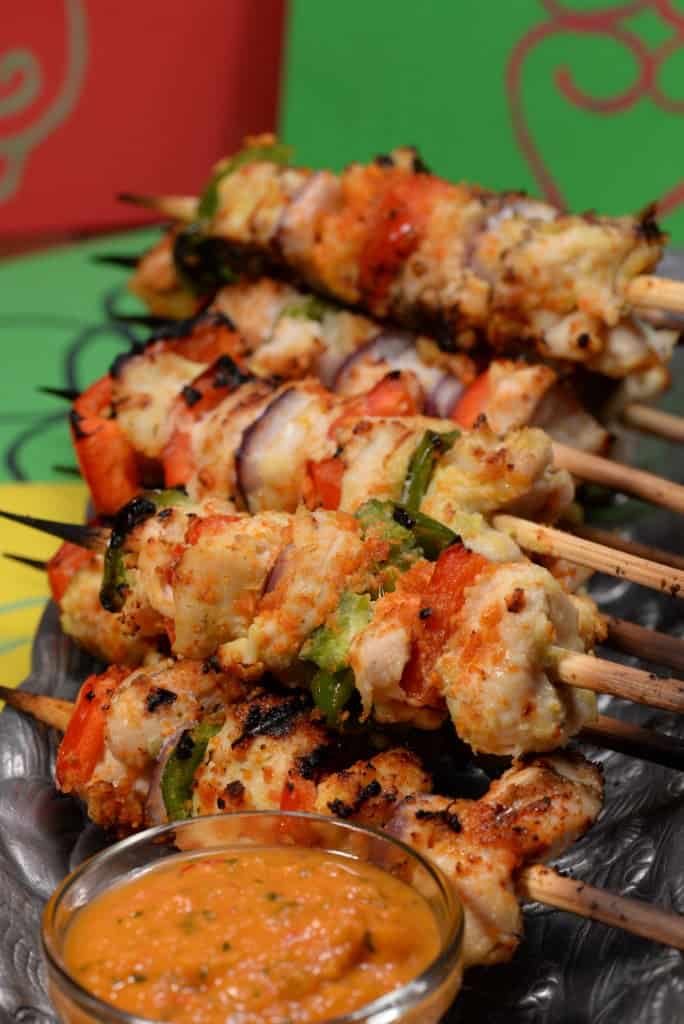 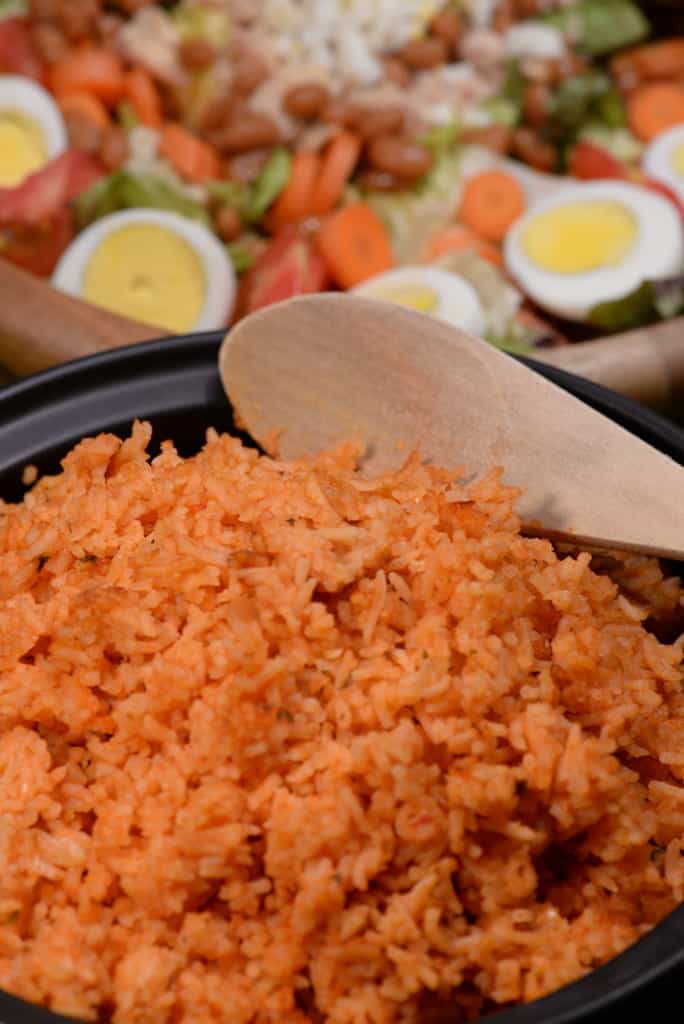 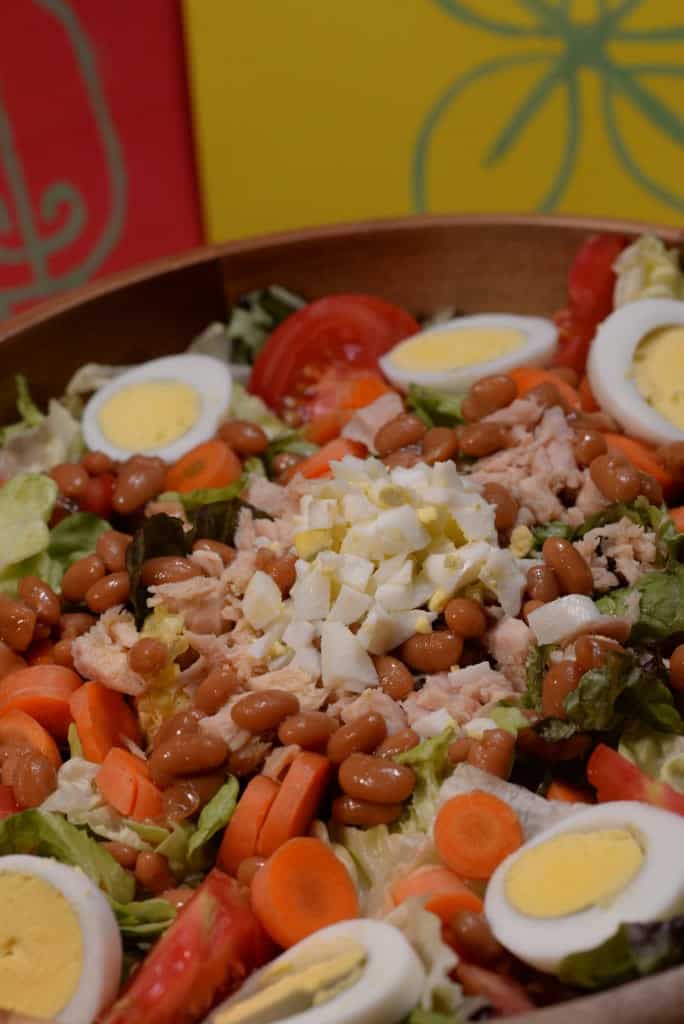 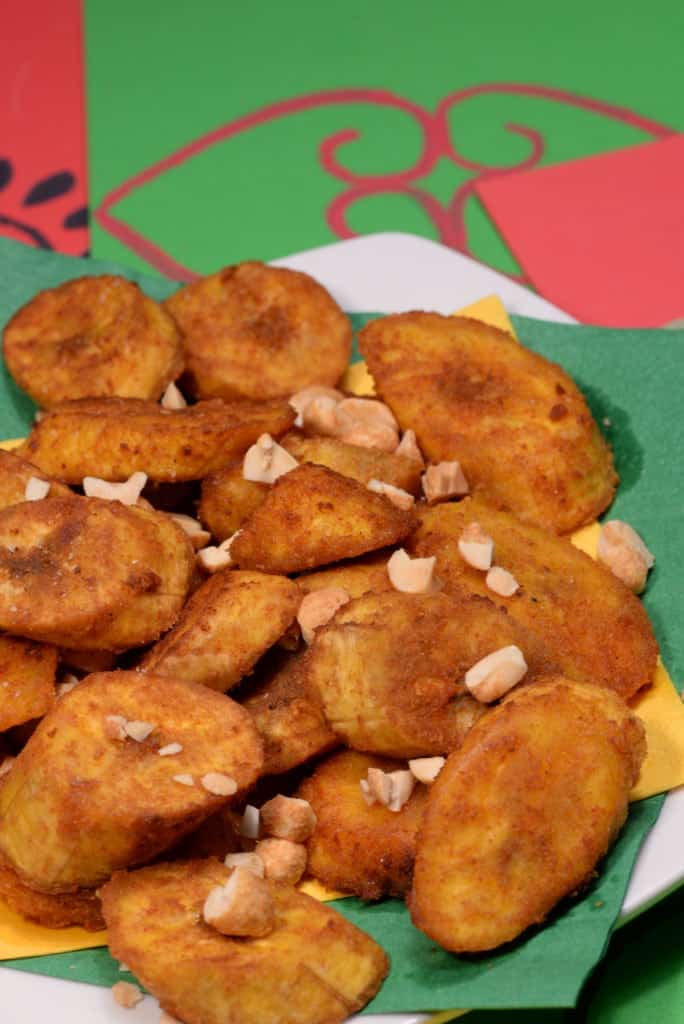 Our decorations for Ghana were special. Hand painted symbols from the Akan tribe, were chosen and painted by our guests. (A fun project to make with kids.) They were painted with colors of the Ghana flag; red, yellow, green and black. The Akan in Ghana, make the real Kente cloth. This cloth is woven by men, with distinctive symbols and colors, each having a specific meaning. The weaving process is intricate and takes years to master. Our dinner places were set and we added some small figurines to represent the Highlife genre while this music played in the background. The meal was served communally, with a bowl of water provided to wash our hands before we began. We ate with only our right hand, as would be customary in Ghana. A spoon is sometimes offered to guests, since it takes some practice eating Ghanaian style, if you are not used to eating with one hand.

We began with the amazing, stuffed crabs, called akotonshi. They were served as appetizers and were the perfect starter. This delicate balance of sweet crab meat and the spicy, pepper sauce, browned with bread crumbs, was absolutely sublime.

For the main course, we served chichinga. This is a common street food found all over West Africa. You may remember our Journey to Cameroon and the meat kabob we loved so much, called Suya, (pronounced SOYA.) The chicken was first marinated in ginger and garlic and then sprinkled with the suya. Once grilled, we dipped it in the African pepper sauce and it was heaven! We enjoyed this alongside another famous West African dish, called Jollof rice. It seems that every country has their own version of this spicy rice dish and it is often made with fish, meats and vegetables added to the rice. This version was a vegetarian version of the spicy Jollof rice that went beautifully with the chichinga.

Ghanaian salad, was another side dish, which delightfully rounded out the meal. The salad is made with tuna and hard-boiled eggs, plus some veggies and baked beans, of all things. A mayonnaise based dressing, made with a bit of the African pepper sauce, was an incredible complement. This salad would make a lovely lunch all on its own.

For dessert, we served Kelewele, pronounced Kay-la-way-la. This is the familiar, fried plantain but with a culinary twist. The plantains were dusted with cayenne and ginger before frying, which was a delicious treat to end our Ghanaian meal. In Ghana you would likely enjoy your meal with a little palm wine, a favorite beverage there, made from the many palm trees found in their tropical jungles.

As we say goodbye to Ghana I leave you with the meanings of the Akan symbols that the kids unknowingly picked for our decorations.

Love does not lose its way home, the power of love
The earth has weight, wealth, might.
Do not boast, do not be filled with pride, there is a need for humility and service.