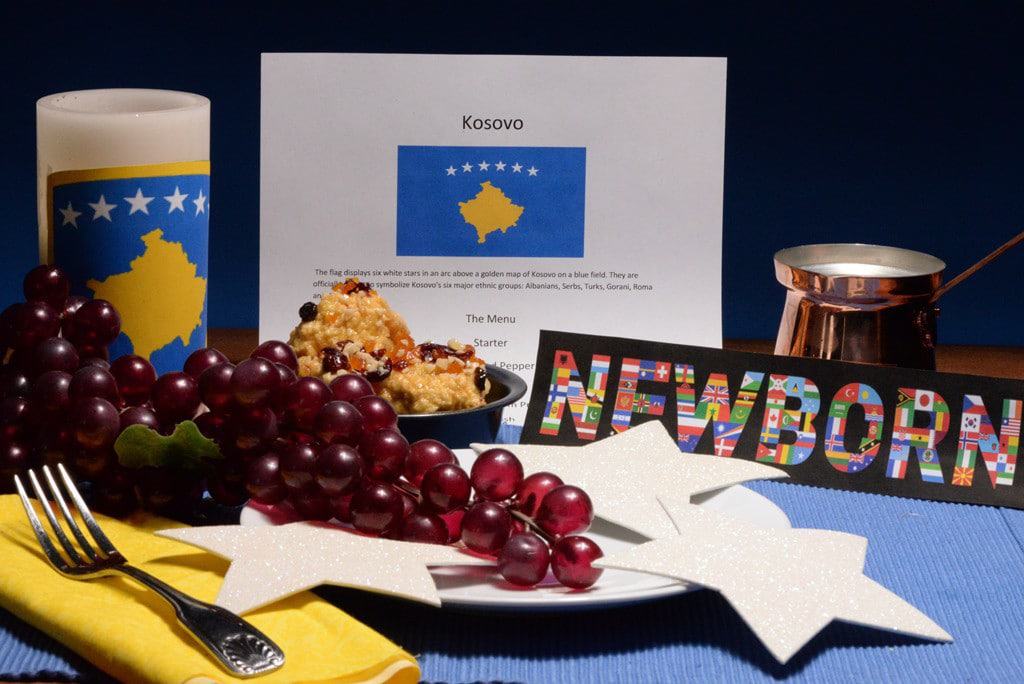 The name Kosovo is derived from a site on which a battle occurred in 1389.  It is a Serbian name meaning, “Field of the Blackbirds.”   The area served as the medieval center of the Serbian Empire until the defeat of the Serbian forces, at the Battle of Kosovo. The defeat led to five centuries of Ottoman rule.

Kosovo is landlocked and the smallest country in the Balkans.  Her neighbors are: Serbia to the north and east, Macedonia to the south, Albania to the west and Montenegro to the northeast.

Kosovo is a self-declared, independent country and the second newest in the world, establishing independence on February 17, 2008.  Even so, about 80 countries around the world have not yet accepted Kosovo as a legitimate country.  In 2010 the International Court of Justice ruled that Kosovo’s declaration of independence did not violate International law, but Serbia along with Russia did not accept that decision.  In the early 20th century, Kosovo was incorporated into Serbia (which later was part of Yugoslavia.) Kosovo has a long history of inter-ethnic tensions, having been an autonomous region, on and off, throughout time.  By the second half of the 20th century, Muslim ethnic Albanians outnumbered the Eastern Orthodox Serbs in Kosovo.  After the breakup of Yugoslavia in the 1990s, Serbia responded to separatist pressure from Kosovo.  After numerous incidences against the Serbs within the Kosovo region, by the KLA (Kosovo Liberation Army), the Serbs launched a brutal attack on the Albanian population, which many considered to be ethnic cleansing.  The attack was ended in 1999 by NATO intervention.

Kosovo’s citizens are some of the poorest in Europe, with a GDP of $8000 per capita.  The war had a devastating impact on infrastructure there.  Although the country is recovering, it still suffers from an extremely high unemployment rate; nearly 31%.  The country’s economy has shown progress in becoming a market based system.  However, with an average age of only 26 years old, the country encourages emigration.  Remittances from the diaspora, most living in Germany, Switzerland and other Nordic countries, account for 15% of Kosovo’s GDP.  Kosovo does have some natural resources, such as, minerals and metals and is working on improving exports.  One of their biggest hurdles has been energy.  They recently privatized their electricity supply and are getting help from the US government to build a new power plant and rehabilitate coal power.  The euro is the official currency of Kosovo, which has helped to keep inflation low.  The Serbian dinar is used in the Serb majority communities but illegally.  It is believed there is a rather large black market throughout Kosovo.

Most people live in small towns, rurally, outside the capital city of Pristina, where subsistence farming is common.  The population of Pristina is about 400,000 and it is the largest city in Kosovo.  It has not yet been able to capitalize on tourism, but it clearly will, as one of Europe’s newest capital cities.  There are several important sites in Kosovo, many relating to the early Serbian empire, which is another likely reason that Serbia does not accept Kosovo as an autonomous state.  UNESCO sites consist of four Serbian Orthodox Christian churches and monasteries.  These represent the fusion of the eastern Orthodox Byzantine and the western Romanesque architecture. They are filled with beautiful fresco murals, representing the largest preserved gallery of Serbian medieval art in existence.

The people of Kosovo are known to be extremely hospitable and love to party, as is the case with all the Balkan states.  The capital city is emerging with numerous cafés and restaurants.  This young nation is trying hard to make a new start.  This is evidenced by a monument that simply has giant letters spelling out the word, “Newborn.” If you ask for directions, you will likely be personally taken to your destination.  Often times this will include a stop for a homemade meal or a cup of coffee, and perhaps an offer for a place to stay.  Americans and Brits are personally thanked for Kosovo’s new found freedom.  Tony Blair and Bill Clinton are national icons there.

As we look into the cuisine of this new, self-declared nation, the influence is largely a mix of Albanian, Turkish and typical Balkan food.  The food is seasonal, being heavier in the winter and a lighter fare in summer.  The quintessential dish of Kosovo is called, Flija.  It comes from Albania and is famous in the mountainous regions of Kosovo.  It is a giant pie, of sorts, with thin layers of batter that turns into dozens of crepes.  It is ladled with butter and milk solids in between and each layer is painstakingly cooked, one at a time.  It takes hours to make flija and it is done in a special pan.  The lid, called a sac, is a metal cover that is heated over the wood fire and then placed on top of the pan so it cooks, from the top down.  Other common dishes there are: burek; pies made of meat, as well as spinach and cheese, casseroles, called tave.  Peppers stuffed with lamb or beef as well as Sarma; stuffed grape or cabbage leaves.  Kebabs and rice along with bread and dairy, especially yogurt and soft curd cheeses, are important staples.  Ajvar is a spicy homemade spread of roasted red peppers (and sometimes eggplant) that is found on nearly every table, along with pickled vegetables.  Trout is also plentiful in Kosovo, coming from the many notable rivers within its borders.

So let’s enjoy a Kosovar meal: 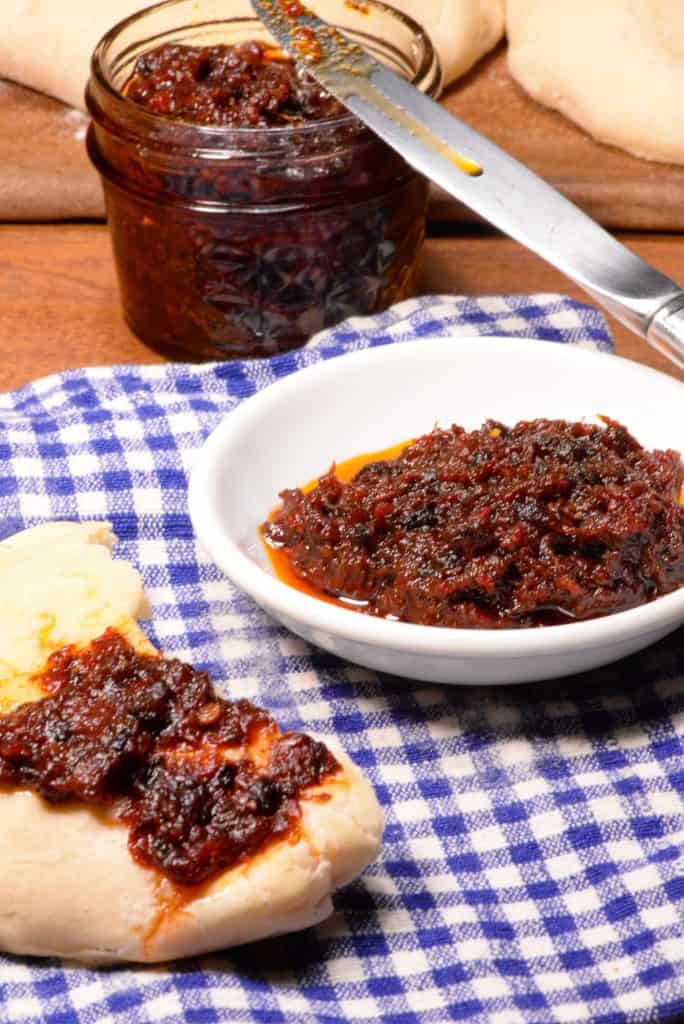 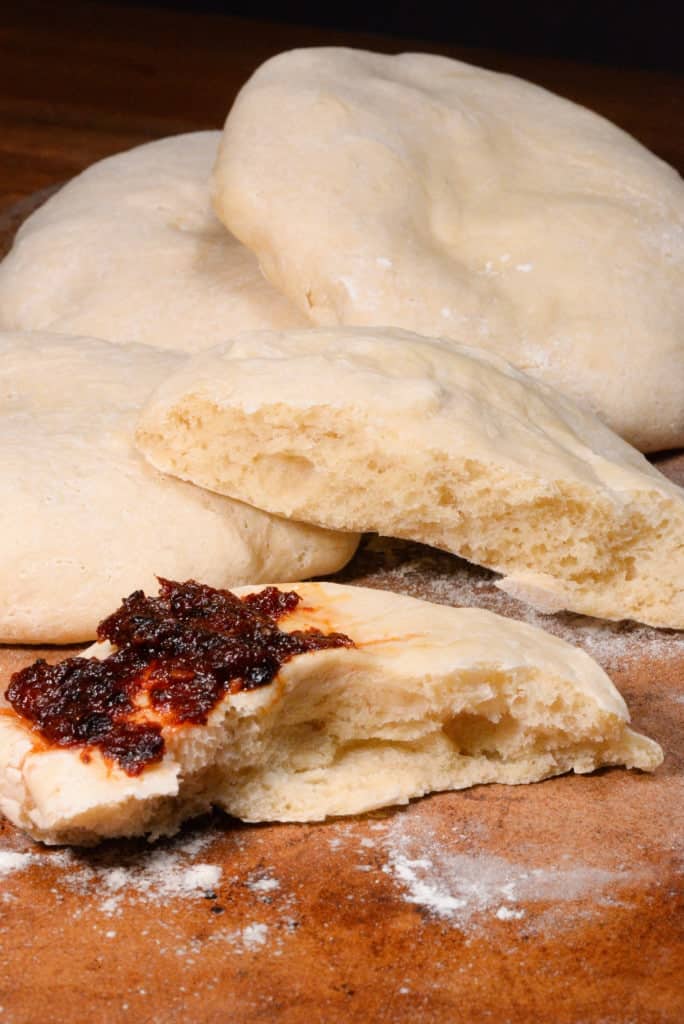 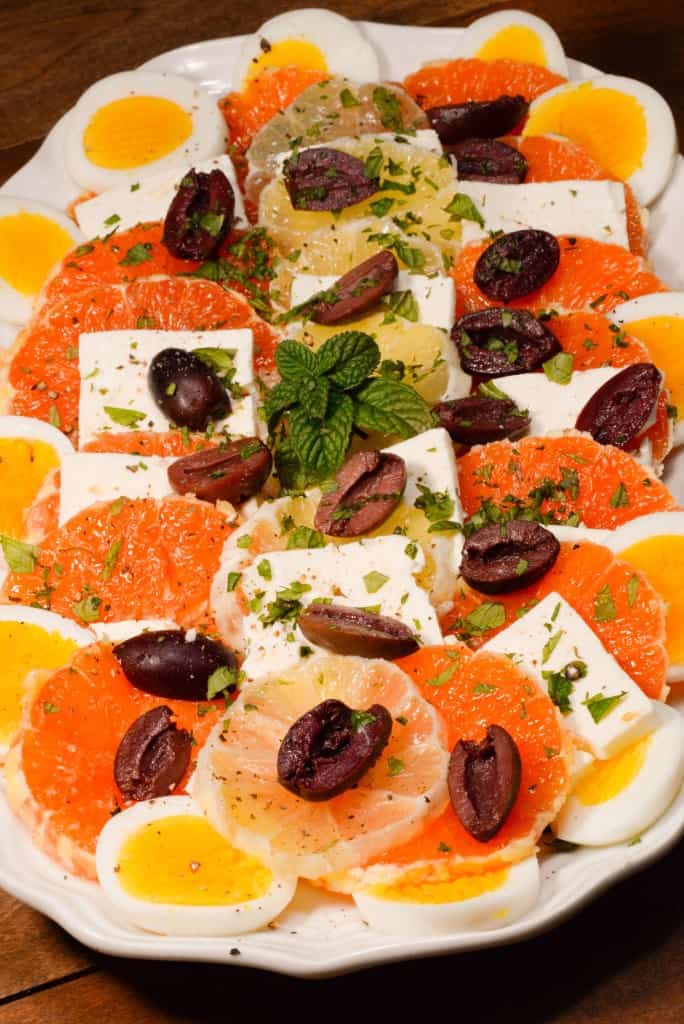 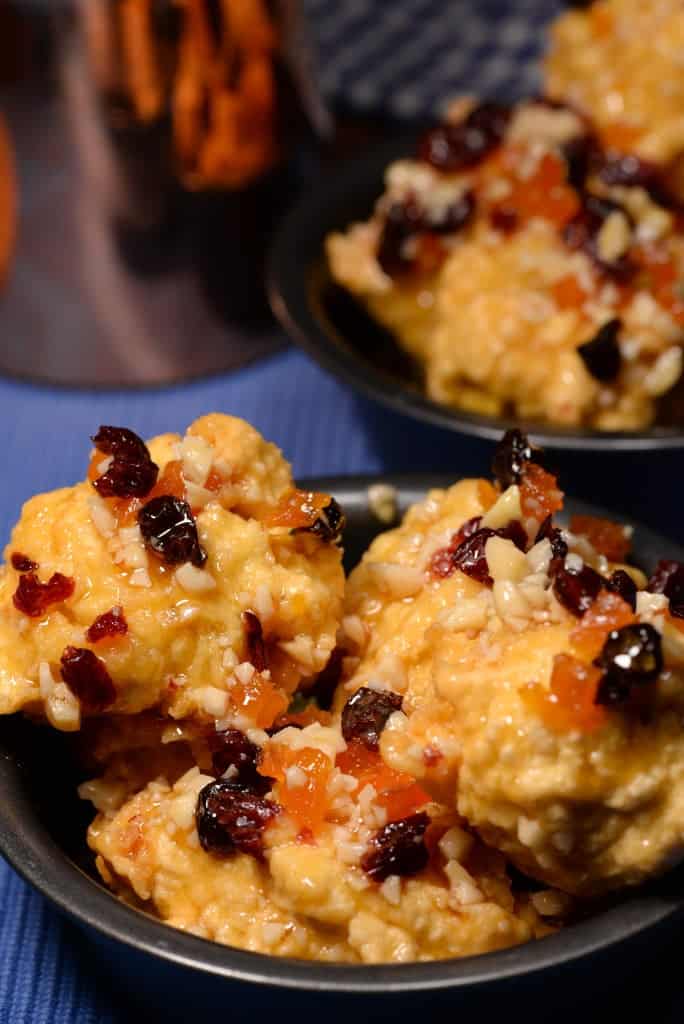 We set the table with the colors of Kosovo; blue and yellow.  White stars represent the different people who call Kosovo home.  We also decorated with the coat of arms and the word “Newborn” that is so symbolic to their nation.  It was originally painted yellow but then has been repainted each year with the flags of the nations that have recognized Kosovo as an independent country. We placed a ski hat to symbolize the new ski resort they are building with help from France.  Finally we added a bunch of grapes, to represent their emerging wine industry.

We began our meal with, “T'bofte mire” which means “Bon appetit” in Albanian.  The first course was a delicious roasted red pepper spread, called Avjar.  This spread is part of every meal and is simply delicious smothered on a piece of pillowy, Pitalke bread, made famous in the Prizren region of Kosovo.  Be warned that the bread and this heavenly spread can be addicting.  Avjar is likely of Turkish origin.

For the main course, we served an interesting casserole-type dish made of tender, garlicky lamb that was smothered in a yogurt and egg mixture and cooked like a soufflé.  The result was a light, tart and delicious combination of flavors which was enhanced by adding fresh oregano.  This Tave Kivo recipe is of Albanian origin.

The salad that accompanied the Tave Kivo, was my favorite dish on the table.  It was sweet, tangy, salty and savory, all at the same time.   It was made with rounds of oranges, lemons, hard-boiled egg, and white brined cheese.  It was topped with black brined olives, mint and then was drizzled with olive oil.  I will make this salad often.

For dessert, we had a little pastry dipped in honey that was flavored with bits of raisins, apricots and nuts.  Kurore, as it is called, was a sweet ending, with a cup of Turkish tea, to our Journey to Kosovo.

As we say goodbye to Kosovo, we do so with hope that all of the world can find a way to recognize and embrace this new nation, and that they may live in peace.

P.S. Have you ever tried any of these dishes?