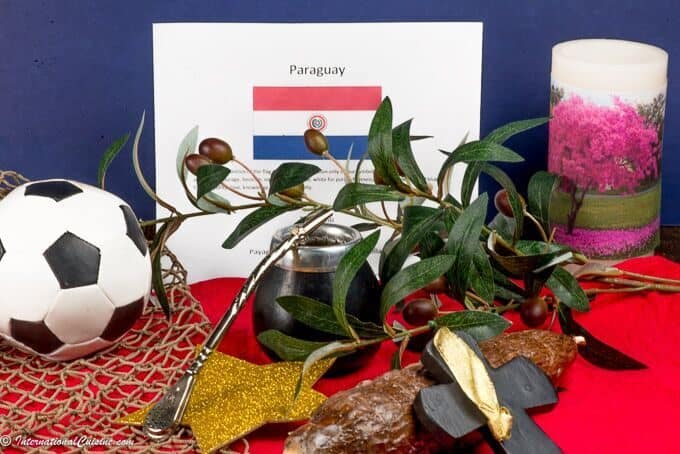 How did Paraguay get its name?

Where is Paraguay located?

Paraguay’s nickname is “Corazon de Sudamerica,”  “The heart of South America.“  Its nickname is due to its location in the center of the South American continent.  It is a landlocked country that borders Argentina, Brazil and Bolivia.  It lies on both banks of the Paraguay River, which runs through the country from north to south.  The capital city of Asuncion is located on the banks of the river, in the southwestern part of the country.  It is also part of the Triple Frontier, which has a tri-border area where the Igauzu and the Ptarana rivers converge.  In Paraguay, the city is called Cuidad Del Este, which is the closest city from which to see the magnificent Iguazu Falls, that makes up the largest waterfall system in the world.  Iguazu Falls is one of the new, natural Seven Wonders of the World.  The western region, known as Chaco, has 60 percent of the country’s land but only two percent of the population lives there.  The majority of the population lives within 100 miles of the capital city.

A Brief History of Paraguay

The original inhabitants of Paraguay were the Guarani people.  They were farmers.  The Spanish arrived in the 16th century and founded the capital city of Asuncion in 1537.  Paraguay was one of the first to gain independence from Spain in 1811.  This was due mainly to its lack of precious ores.  Jose Gaspar Rodriguez Francis became the first of a long line of dictators that ruled the country.  In 1865, the war of the Triple Alliance began and was a total disaster for Paraguay.  The war was with Argentina, Brazil and Uruguay and lasted until 1870.  Nearly 2/3rd’s of the male population were killed during this war and Paraguay lost much of its territory, including Iguazu Falls.

Another war broke out, called the Chaco War, from 1932-1935, in which Paraguay won against Bolivia, winning back some of its western territory.  Dictators ruled the land until 1989, when General Andres Rodriguez overthrew Stoessner, who was accused of torturing and murdering thousands of political opponents.  Rodriguez went on to win Paraguay’s first multi-candidate elections.  In 1992, Paraguay’s constitutional reforms finally gave equal rights to women. They were one of the last South American countries to give women the right to vote, in 1961.

Today, Paraguay is experiencing excellent economic growth and is considered to be much more stable, both politically and economically.  Unfortunately, however, the distribution of wealth is tragically unequal.  80% of the land is held by only 2.5% of the people, with 161 people controlling 90% of the country’s wealth.  It is estimated that half the population lives below the poverty line.

Paraguay, along with Brazil, built the largest dam in the world in 1984 (that is until China surpassed it in 2008.) Named the Itaipu Dam, it is used for hydro-electric power, which is a major export for the country.  The dam supplies 75% of Paraguay’s electricity.  Paraguay also exports sugarcane, soybeans, stevia, corn, wheat, tobacco, cassava, fruits, vegetables, beef, pork, eggs, milk and timber.  Over half of Paraguayans work in agriculture and forestry.

As the Guarani were the primary occupants of Paraguay when the Spanish arrived, many of them took Guarani wives creating a mestizo culture, which is 95 percent of the population today.  Paraguay is one of the few countries in the world that kept their indigenous language as an official language, also called Guarani, along with Spanish.  Some speak Jopara which is a mix of the two.  The Guarani language is an onomatopoeic language, whereby many of its words, like its music, imitate the natural sounds of animals and the natural environment.

Jesuit missionaries established missions in Paraguay.  There are well preserved Jesuit ruins that date back to 1706, which have been named a UNESCO world heritage site and is the only site named in Paraguay.  The Spanish expelled the Jesuits from Paraguay in the mid 18th century, for which Pope Francis recently issued an apology for the colonial era crimes committed. Today 88% of the population is Catholic, 8% protestant and the balance, indigenous beliefs.

The art of lace making called nanduti, is a prized craft.  It is a wheel based, lace form that originated in Portugal and Spain.  In fact, nanduti actually means “spider web.”  The Paraguayans have put their unique spin on the craft, adding palm leaf shapes to the design.  A festival is held in the town of Itaugua each July, where visitors can watch the lovely lace being made.

Music and dance are other examples of fusion between the Spanish and Guarani cultures.  In rural areas, people play instruments of the indigenous people, including flutes made from sugarcane and rattles made from gourds.  The early conquistadors brought the Spanish guitar and Spanish harp to Paraguay.  These two instruments remain prominent in the music of Paraguay.

The Paraguayans are known for a specific dance, in which they move with an impressive stack of bottles on top of their heads.  There is a vase dance as well, both of which are performed by women. A couple’s dance, known as the Paraguayan Polka, is danced in ballrooms, and on village dance floors, it was created in the 19th century.

Paraguay is one of the least visited countries in South America, which is precisely why you should want to go.  The fact that it has never built up its tourist infrastructure, is its greatest charm.  This is truly a place where you can get off the beaten track and experience local life.  It is considered safe and the real joy is, the Paraguayan people, who are known to be exceptionally friendly and welcoming.  You will, however, want to have a Spanish/Guarani dictionary handy, as English is not widely spoken.  Buses are the main form of transportation for both locals and tourists alike.  Whether you go to visit the falls, the chaotic, but shopping friendly, city of Cuidad del Este, or to explore the unique flora and fauna that make up the country, there is plenty to see and do in this little known and often misunderstood country of Paraguay.

As Paraguay is not a wealthy country, much of the culture revolves around family and simple pleasures.  You will see groups of people sitting around under the shade of a tree, drinking the traditional tea, such as a drink, called terere.  What yerba mate is to Argentina, terere is to Paraguay.  It is mate but with herbs and enjoyed cold, instead of hot.  You will see everyone carrying a thermos and a gourd with a straw, called a bombilla.

Sopa Paraguaya is considered to be the national dish and is often eaten daily.  Despite its name, it is more similar to a cornbread than a soup.  Chipas are found on nearly every street corner.  This is a cheese bread, made with cassava flour and is similar in texture to a bagel.  Empanadas, milanesa and asados, are also popular and enjoyed in Paraguay, just like with her neighbors.  Generally speaking, Paraguayan cuisine is typically South American.  Fish and meat stews and soups are the norm.  Probably the ingredient that is most used, is mandioca, also known as yucca or cassava, which is somewhat similar to potatoes. They are a native crop and served with nearly every meal.  In fact , it is so common there is a local saying, “Mas Paraguayo que al mandioca” (More Paraguayan than the mandioca). You can also find sushi, schnitzel and shrimp on the barbie, as a result of the Japanese, German and Australian settlements there.

So let’s enjoy a Paraguayan meal: 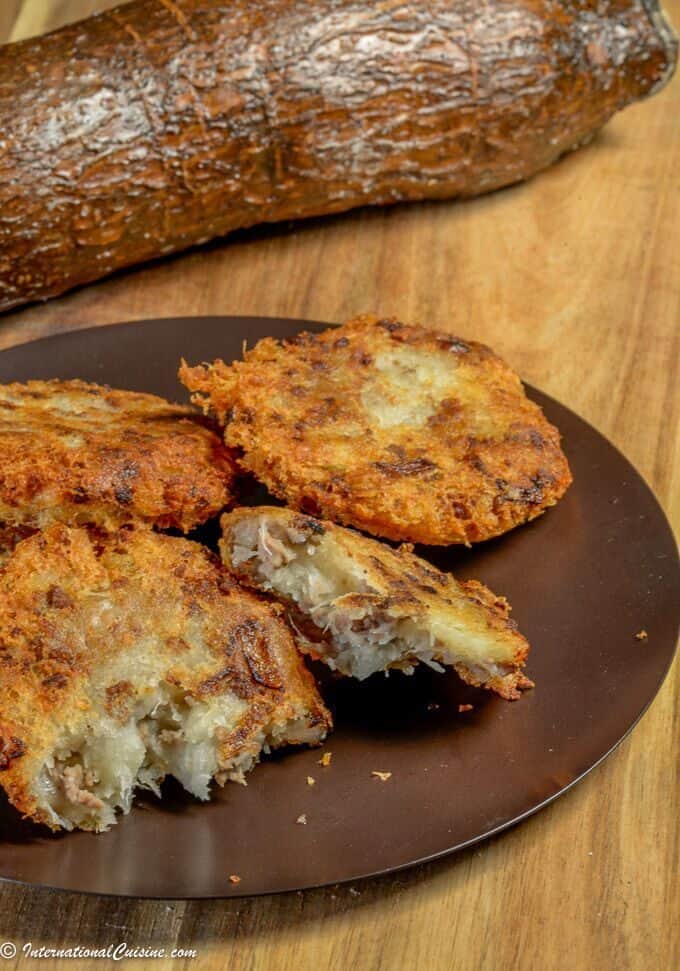 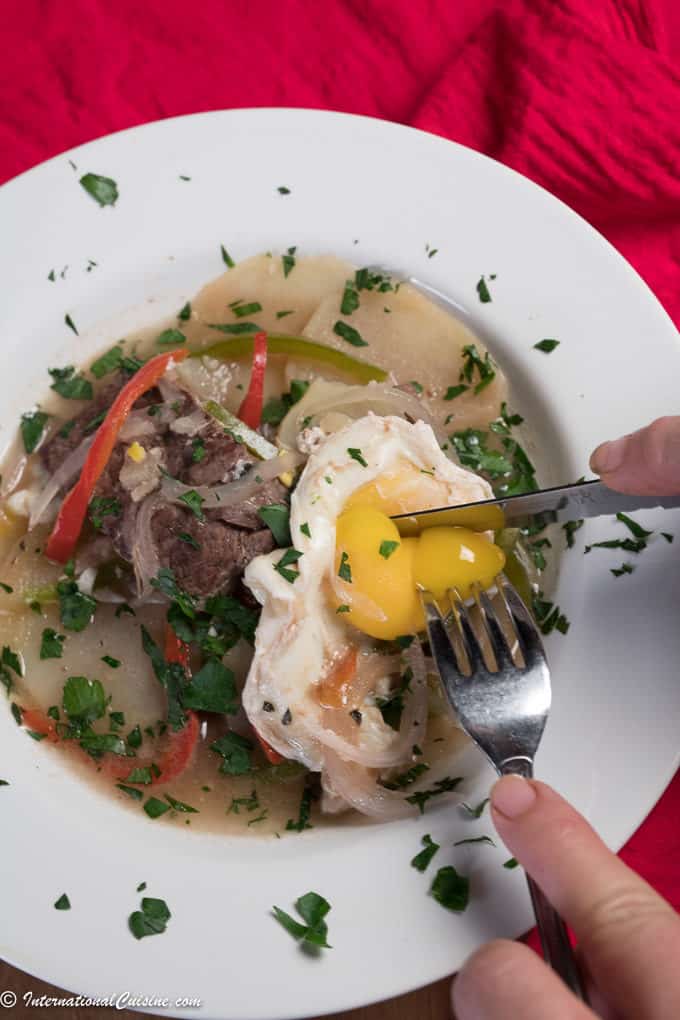 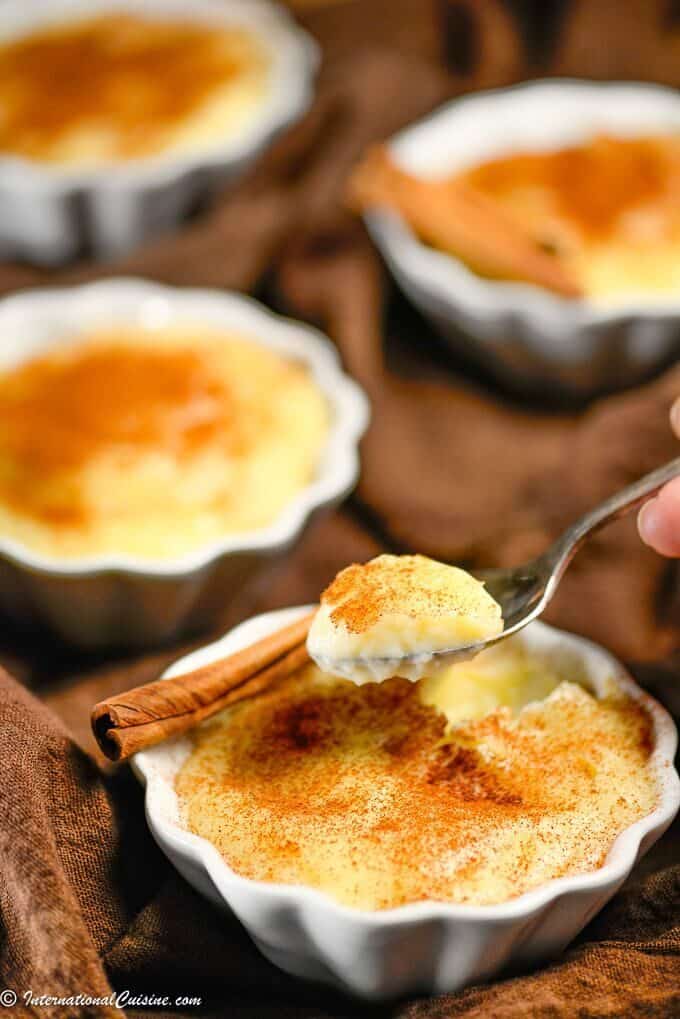 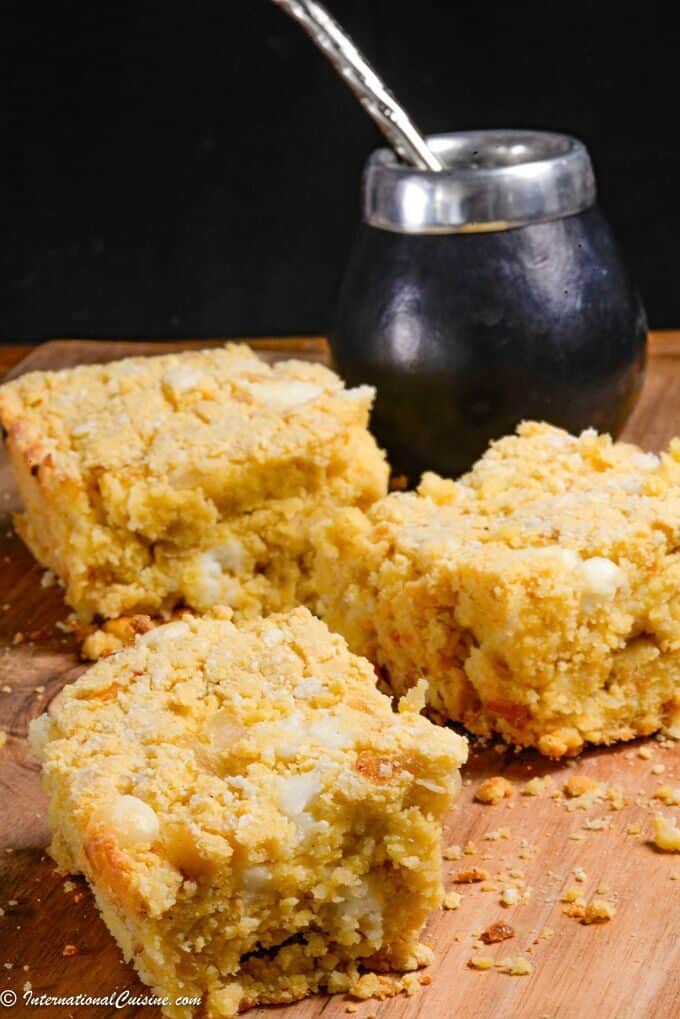 We set the scene with the colors of the Paraguayan flag; red white and blue.  We added a gourd, a bombilla, mate, as well as a mandioca/yuca, root.  A soccer ball and fishing net were added, as they are both important sports in the country. We included a photo of the beautiful national tree called the Pink Lapacho, whose inner bark lining is made into a tea, and is also well known for its medicinal value.

The main course was called Bife Koygua and is a typical Paraguayan beef stew.  We completely understood why this is a cherished dish; tender steak, with veggies and a perfectly cooked egg on top.  Bife Koygua is a true comfort food that I will make again and again.

For dessert, we enjoyed a super easy and delectable custard dessert, simply called crema.  This creamy custard is made with eggs, milk and sugar. It had a hint of lemon and was sprinkled with cinnamon.  We enjoyed it with their traditional tea, called terere, which is ubiquitous there.

As a bonus, I included the recipe for their national dish called, Sopa Paraguaya.  It is not a soup at all, but a delicious cornbread that also goes great with terere.

As we say goodbye to this little known country of Paraguay, I leave you with a few Paraguayan proverbs:

“Be grateful with what you have rather than what you think might be out there.”

“If you think the worst, you won’t be far wrong.”

Jajotopata,  which means, “goodbye”, in Guarani.