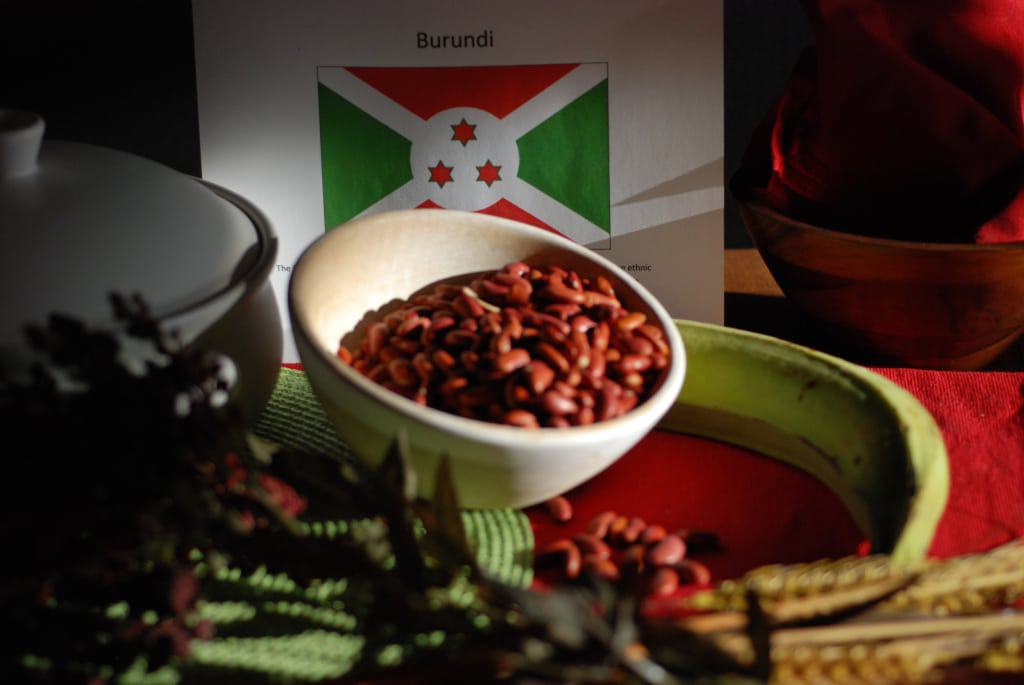 This week International Cuisine takes a journey to the small country of Burundi located in central, eastern Africa, it is one of the smallest and yet one of the most densely populated in Africa. The original inhabitants are the Twa Pygmies, however today, they represent only one percent of the population and live in the forested highlands. The Hutu came to the country in the 11th century and remain the largest in number with agriculture being their main occupation. However, it is the Tutsi, who followed in the 14th century, representing about 20 percent of the population today, and who control the country, as a warrior tribe.

Her neighbors are Rwanda, Tanzania and the Democratic Republic of the Congo. The country sits on a high plateau, ranging from 2500 feet in the east, to 8700 feet at the peak of Mount Heha. She has two wet seasons and two dry seasons, with temperature variations due to the altitude. One third of the country is pastureland, the most fertile being in the highlands. She is home to many species of wildlife, yet animals today are threatened, as the country has not established protected areas and sadly poaching crimes are not enforced.

In 1885, Burundi was taken over by the Germans and was called German East Africa. It remained that way until the Germans lost the territory with little resistance to 1400 Belgium soldiers during World War I. Burundi and Rwanda then became known as Ruanda-Urundi. Burundi was so named after gaining independence from Belgium in 1962. Although the United Nations (UN) felt they should remain one country, both Burundi and Rwanda wanted to be separate, so the UN finally agreed. Rwanda was ruled by the Hutu and Burundi remained under the power of the Tutsi.

The Tutsi and the Hutu have been in constant conflict for centuries, with mass genocides having been spawned by both sides and the battle continues today. The farming nature of the Hutu is looked down upon by the Tutsi, who are cattle herders. The same animosities that exist in Burundi between these two tribes, also exists in Rwanda. More and more Hutu are forced to leave Burundi while more and more Tutsi make their way there. The Twa, preferring to live in the forest, simply stay away from both tribes.

Ninety two percent of the population lives in rural settings, in small family groupings, which are really too small to be called villages. However, Burundi does have a capital city, Bujumbura, located on the north shore of Lake Tanganyika. This lake is the second largest freshwater lake in the world and is Burundi’s main port. The county also has another urban center called Gitega. Gitega and Bujumbura are the only two urban areas in the entire country.

The official languages of this country are French and Kirundi. All three ethnic tribes speak Kirundi and also some Swahili, which is a mixture of Arabic and Bantu. Swahili is the language for trade and business and is commonly spoken around the capital city. The majority of the population (67 percent) are Christians, Traditional beliefs represent 25 percent of the people and the remainder is Muslim.

Cattle are considered sacred and a sign of wealth. When a cow dies, the family will eat the meat and then plant the horns near their home to bring good luck. Even though a family could make a good living selling cattle, they don’t. A typical Kirundi greeting is “Amashyo” which translates to “may you have herds of cattle.” There are also intricate food customs that revolve around cattle. For example, milk cannot be heated or boiled or consumed on the same day one would eat peas or peanuts. Cattle are also used as currency and for a wedding dowry.

Burundi is poor, really poor, with one the lowest gross national products in the world. Life expectancy there is the young age of 45 and infant mortality is so high, they don’t even celebrate a baptism until the age of one. Their biggest export is coffee, introduced to them back in 1930. However, it is not a reliable crop due to erratic weather and the changing commodity price. The government is trying to introduce new crops for export, like tea and sugar. Ninety percent of the population support themselves through farming; growing cassava, corn, sweet potatoes, bananas and sorghum.

The diet in Burundi consists mainly of carbohydrates. Vitamins and minerals are obtained through vegetables, fruits and some grains. Very little fat or protein is available except around the area of Lake Tanganyika, where fish are abundant. Many suffer from a disease called Kwashiorkor, caused by a protein deficiency.

Making a meal in Burundi is labor intensive; cassava root has to be washed, pounded, and strained and sorghum is ground into flour for porridge. The porridge is then rolled into a ball, called Bugali, used for dipping into gravy.

As I looked into recipes for this country, it was clear it would be a vegetarian meal and there would be no appetizer and no dessert. It would just not be representative otherwise.

So let’s eat and be thankful: 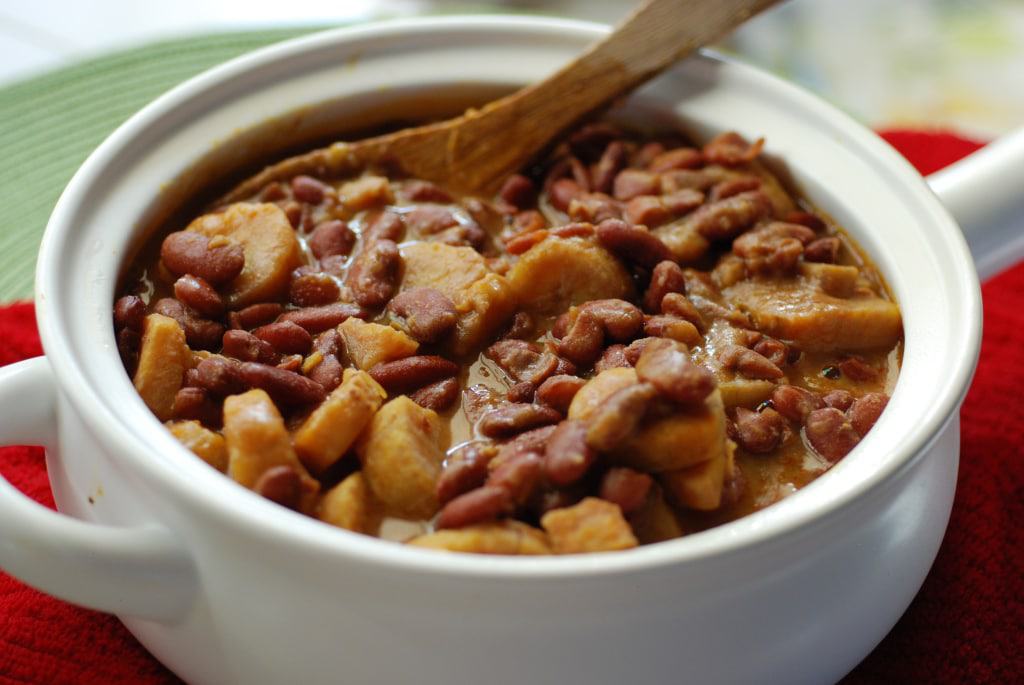 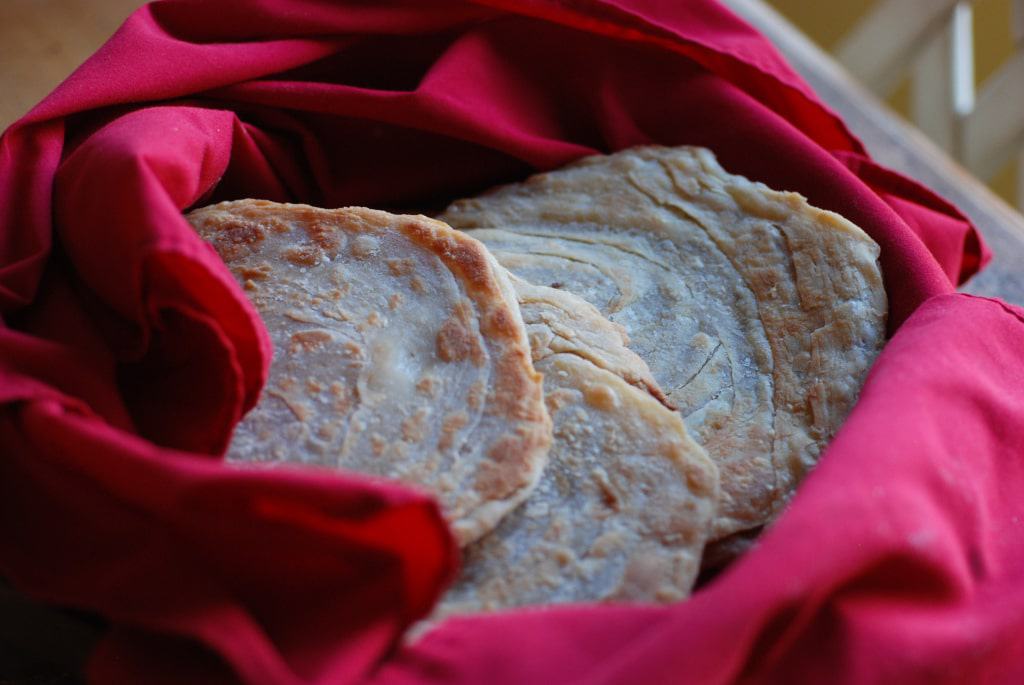 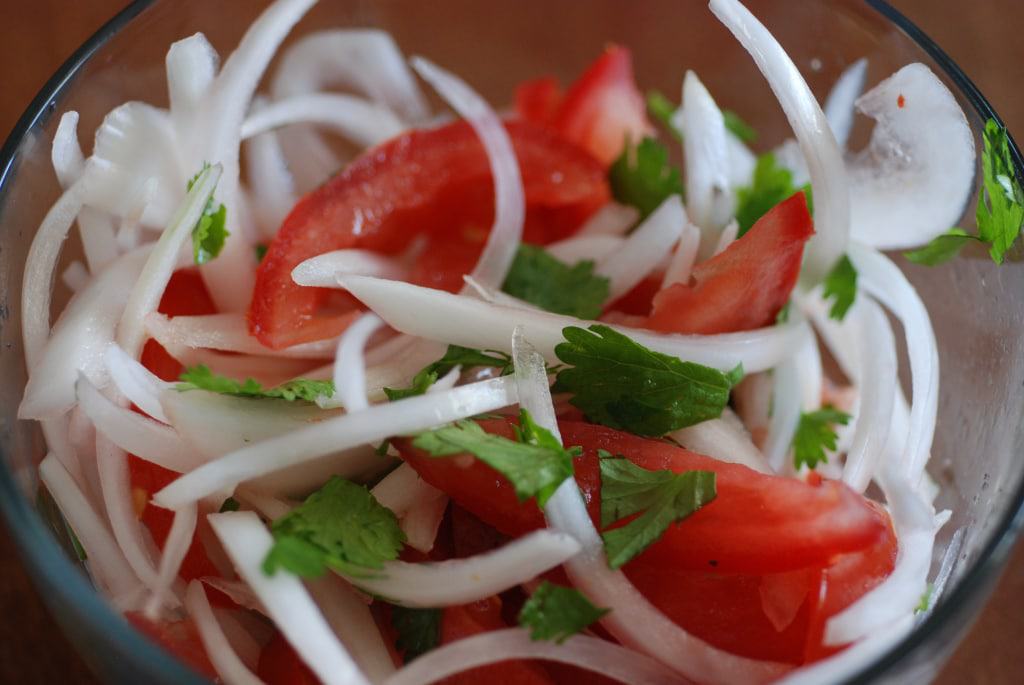 We set the table with the colors of the Burundi flag. Red stands for her struggles for independence, green is for hope and white is for peace. We said a prayer for these three ethnic tribes and their land. We then wondered how life might have been different, not just for them, but for many other countries, if the boundaries after colonization, were more clearly thought out. It seems that so many wars are over territory and between ethnic groups that can’t seem to get along.

We ate the meal family style, using only our right hand, as is customary there. Much to our surprise, the beans and bananas were a delicious combination. With so few items to choose from, I am certain that each Burundian family has their own special touches to add to this simple, filling, sweet and savory dish.

The flat bread was outstanding and really fun to make. When I first saw the recipe, I was skeptical, as it said to make the dough into a paper fan and then roll it up to create a flaky interior. It worked! The bread was perfect with the bean and banana stew.

On the side, we enjoyed a light, slaw like salad, which was simply: onions, tomatoes, a little chili and fresh cilantro with just a squeeze of lemon on top.

In Burundi they make a special kind of alcoholic beverage using bananas. However, we decided to enjoy the meal with a simple glass of water.

This journey was heart wrenching for me. How sad that people have to kill each other just because they are a different ethnicity. How sad that so many live in poverty without proper sanitation, clean water, or food. How sad to not have medical care to speak of, in the midst of so many diseases; AIDS, and malaria being the most formidable threats.

As we say goodbye to Burundi, I do so feeling extremely blessed for the good fortune in my life and with a true sense that there is so much more I can be doing to make this world a better place. We ended the evening watching a movie called Hotel Rwanda, one I would highly recommend, to understand the turmoil, struggles and fortitude of these African tribes and how one person can truly make a difference.